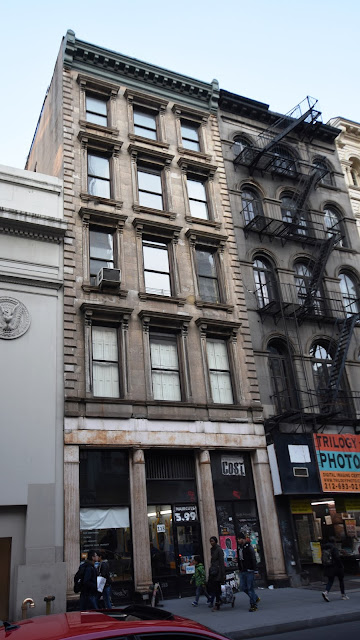 When Sarah Lloyd Broome married wealthy merchant James Boggs she was already 31 years old.  The couple moved into a fashionable home at No. 113 Chambers Street.  During their 27-year marriage they would have seven children.   The first three died in infancy; but the others survived, Mary Rebecca, John Broome, James Samuel, and Julia.  Like most wealthy Manhattan families, they had a country estate, Chevilly, which they purchased in 1821.

Mary’s wedding to banker Richard Ray took place in the Chambers Street house in 1832.  They moved to an elegant home at No. 3 University Place.  (Her sister, Julia, and brother-in-law, Lewis Howard Livingston, would live next door at No. 5 University Place.)

In 1836 Mary and Richard took their two infant daughters to Europe.  There, on March 21, Richard Ray died suddenly.  Mary had already received a substantial inheritance from her father, including $16,000 in cash (a little less than half a million in 2015 dollars).  Now she inherited her husband’s properties, including buildings on Pearl Street, Water Street, Chambers Street, and 20 undeveloped lots between Eighth and Eleventh Avenues.

Following Sarah Lloyd Broome Boggs death in 1849 in No. 113 Chambers Street, Mary Rebecca Ray inherited the family home.  The property stretched through to Reade Street where the private stable stood.

According to Barbara Broome Semans and Letitie Broome in their 2009 John Broome and Rebecca Lloyd: Their Descendants and Related Families, “Mary R. Ray evidently had difficulty in settling Sarah Boggs’s estate.”  Nine years after her mother’s death, Mary was still grappling with legal entanglements.  In the meantime, she leased the house and stable to nurserymen Wm. R. Prince & Co.  On March 18, 1854 they advertised “a most superior collection of large sized Fruit and Ornamental Streets &c., at reduced prices.”

In 1857 Mary had the Chambers Street house and stables demolished and began work on a store and loft building.  The resultant structure, completed in 1858, was similar to the other modern structures transforming the neighborhood.

The tall ground floor on both sides was fronted in cast iron.  The fluted columns and capitals were chosen from the catalog of foundry of Badger’s Architectural Iron Works.

Most of the firms leasing in the building were related to the cutlery and hardware business.  Among the hardware dealers were Graham & Haines, W. F. Shattuck & Co., the Livingston Horse Nail Company, and Marcus C. Hawley & Co.  Cutlery merchants included Broch & Koch and the Electric Cutlery Company.

Edward Phelan was the only surviving partner of W. F. Shattuck & Co. in 1876.  He left the building at around 6:00 Wednesday evening, March 25, headed for his home in Brooklyn.  But first he stopped at Sweeney’s Hotel at the corner of Chatham and Duane Streets to meet with his bookkeeper, P. S. Biglin.

Phelan, described by friends as “a gentleman of spotless reputation,” never made it home that night; and the following day he did not appear at his office.  At around 4:00 that afternoon a body was seen in the East River at the foot of Corlears Street.  He was identified as Edward Phelan by the gold Masonic keystone that bore his name and the lodge and chapter to which he belonged.

The New York Times reported “Suspicion that the deceased met with foul play is entertained by his friends, there being marks of violence on his face.”  His missing pocketbook added to that theory.  “As his affairs were in a prosperous condition, the idea that he committed suicide is scouted,” said the newspaper.

By the late 1880s John H. Graham had taken control of Graham & Haines; renaming it John H. Graham & Co. The high esteem in which he was held among the hardware merchants was evidenced on August 6, 1889.  That afternoon, during a “well-attended meeting of hardware men” in the Hardware Board of Trade he was unanimously nominated to represent “hardware and kindred trades” on Mayor Hugh J. Grant’s committee that would represent New York at the Paris World’s Exposition.

In the building at the time was the Berkeley Arms Company, which employed John C. Smart at $50 a week.  Smart lived with his wife, Amy, and teen-aged daughter, Madeline, in Harlem at No. 278 West 118th Street.  His unhappy domestic relations would bring about unwanted publicity for his employer.

In the summer of 1893 Smart stormed out of the 118th Street house and did not return.  On August 5 he faced a judge after Amy sued him for “cruelty and abandonment.”  Smart defended himself, saying “his wife’s temper and petty persecutions drove him from home.”  To illustrate his point, he told of one occasion when she hid his dress suit from him, and that “neither coercion nor cajolery” could induce her to tell him where she hid it.

By the time the Smarts’ sorrowful home life was being aired in the newspapers, John H. Graham had diversified into the rabidly popular bicycle fad.   Cycling had swept the nation and Graham now offered bicycle accessories along with hardware.   During the New-York Cycle Show in Madison Square Garden in January 1895 he exhibited the “Midget” bicycle bell.  He told reporters it was “the most satisfactory bell on the market.  The ‘Midget’ weights but three ounces, and has a clear and piercing tone.”

As the century drew to a close No. 113 Chambers Street continued to house cutlery and hardware firms.  Am Gas Engine Co., sold gas engines as did the Clerk Gas Engine Co; George B. Edwards dealt in “gas and oil stoves;” and Frank B. Hedenberg sold “weather strips, etc.”

But John H. Graham & Co. would be the building’s most veteran tenant, remaining here until the early 1940s when it relocated to No. Duane Street.  The vast array of items the company offered included not only bicycle accessories and hardware, but automobile accessories (like lamps), horse clippers, tea bells, ice skates, cherry stoners, and manure forks.

In 1921 scandal arrived at No. 113 Chambers Street.  Thomas K. Gibbons, Vice President of Riker-Spiegelmann & Co., was 24 years old, successful and wealthy.  In July that year he met Virginia Lee Dickens, whom the New-York Tribune described as “twenty and pretty and hopes to become an actress.”

Ten days later, according to Virginia, Gibbons proposed marriage.  When she declined, he proposed three or four more times until she finally accepted.

Virginia told reporters later than she came from a respected and wealthy Baltimore family and had graduated from a college “which bears a high reputation.”  Since childhood she had exhibited a talent for acting through society plays in Baltimore.  She came to New York to begin her stage career “with her parents’ consent,” and had only been here a month before meeting Gibbons.

Now, on November 22, 1921 The New York Times reported that Virginia, whose stage name was Jerry Dickens “has just learned that he has a wife.”   The Tribune added that “She has suffered about $100,000 worth in consequence, she estimates.”  That was amount of the suit she filed against her suitor.

The New-York Tribune noted that Thomas Gibbons “says the suit is a joke and that he never proposed to Miss Dickens.  He is married, but is not living with his wife.”

Gibbons’s unflattering publicity for ruining Virginia Lee Dickens’s reputation was nothing compared to the problems he encountered five months later.   On April 20, 1922 he appeared before Judge Talley in General Sessions court to answer to charges of assault on a police officer.

Patrolman James J. Shanley had attempted to arrest Gibbons.  It ended with the officer suffering a broken jaw.  “The policeman thinks he was hit with a jimmy,” explained The Evening World the following day.

Thomas K. Gibbons would not be going back to his office at No. 113 Chambers Street for quite a while.  The judge sentenced him to three years, saying “I cannot allow policemen who are endangering their lives to feel that a man who attacks them can go unpunished.  I could send you to State’s Prison.  You have no police record.  I will send you to the penitentiary.” 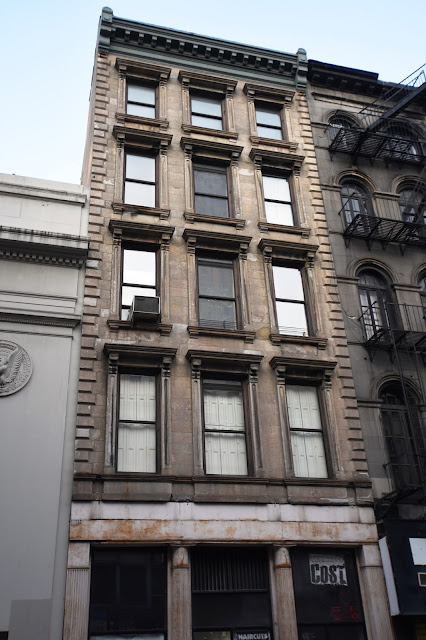 By the third quarter of the century the venerable loft buildings in Tribeca found new lives as galleries, cafes and shops.  In 1991 the upper floors of No. 113 Chambers were converted to two spacious apartments per floor.   Today the cast iron storefronts on both sides survive; although their once-elaborate capitals have broken off.  Above, the nearly 150-year old stone facades are intact; relics of a time of significant change on Chambers Street.