In 1894 he turned to one of Manhattan’s foremost architects to design his residence at No. 330 West 76th Street, steps from Riverside Drive.  Thirty-three year old Charles Pierrepont Henry Gilbert, better known as C. P. H. Gilbert, had already designed lavish mansions, including that of Jules G. Bache at No. 10 East 67th Street.    His best-known commissions would later include the mansion of Joseph R De Lamar and the Felix M. Warburg house

Completed in 1895, the Kennelly house rose three stories to a tiled mansard level.  Gilbert’s Francois I design featured an imposing limestone base with shallow stoop that projected nearly to the property line.  A decorated stone wall protected the full-width balcony at the second floor.   The second and third stories were clad in beige Roman brick and embellished with frothy limestone carvings.

The decoration of Francois I buildings often included images of salamanders—the emblem of King Francis I.  Gilbert, however, transformed the salamanders to dragons—one fearful beast appearing in the foliate design above a second floor window; and five full-relief dragons holding shields lining up below the third floor balustrade.  The stone balustrade crowned the façade, fronting the dormered mansard and the conical cap of the turret.

The Kennellys enjoyed the lifestyles of the privileged class.  Mrs. Kennelly’s “at homes” were routinely announced in the society columns; and the couple spent their summers at upscale resorts like the Hathaway Inn in Deal Beach, New Jersey.

They would not remain long in their new home, however.  Three years after moving in, Kennelly sold the house for $51,000 in March 1898.  The price Alfred Lee Manierre paid was equal to about $1.5 million in 2016 dollars.

Manierre had married Cornelia Putnam Lockwood four months earlier on November 10, 1897.   A partner in the legal firm Manierre & Manierre at No. 31 Nassau Street, he and his wife were highly involved with reform groups.  Alfred was proactive in his temperance beliefs.   He was a member of the New York Prohibition County Committee and the City Vigilance League and had been an honorary Prohibition Candidate for Congress in 1888.

In 1908 he would explain his staunch temperance stance saying “in a quiet way for twenty years and more I have tried to help those who are seeking to outlaw the liquor business.  The indiscriminate sales of intoxicants I believe to be the most prolific source of waste, financial, physical and moral.”  By now he was also secretary of the N.Y. State General Committee for Safeguarding the Sale of Narcotics; secretary and treasurer of the N.Y. State Central Committee for Scientific Temperance Instruction in Public Schools; and Manager of the National Temperance Society. 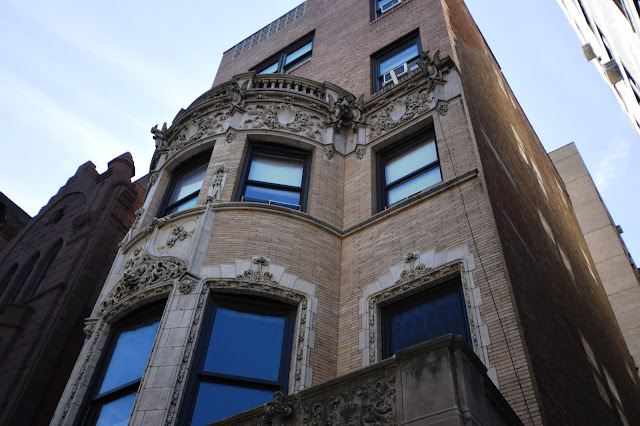 Manierre’s reform concerns went beyond alcohol and narcotics.  He was also a member of the Committee for Improving the Industrial Condition of the Negro, and was a director and treasurer of the New York Red Cross Hospital.

Like Mrs. Hennelly, Cornelia hosted teas and receptions in the drawing room; but the most noteworthy gathering here occurred on April 15, 1905.  The Rev. Edward Everett Hale was both famous and wildly-popular.  An author and historian as well as minister, his writings had made him a household name.  Cornelia Manierre had arranged for him to address the Young People’s Loyal Legion Temperance Society that afternoon.

The New York Times reported the following day that “because it was known that Dr. Hale would be there the gathering was large enough to fill a public hall.”   Instead of the West Side socialites that normally visited the Manierre parlors; that day it was mostly young people who filed into the house.  “The scene was most picturesque and charming.  In the midst of a group of lads and lassies in their brightest and gayest dresses was the leonine head and square-shouldered figure of the writer of ‘The Man Without a Country’ and ‘In His Name,’ tall and straight as a forest pine in spite of his fourscore years and three.”

Hale, of course, included temperance in the several issues he spoke about.  “Only in a pure body can the soul be pure,” he told the youths.  “And it is for this reason that we take and keep the pledge framed by this organization to which you all belong.”

Manierre died in the 76th Street house on October 1, 1911 at the age of 48.  Cornelia and the children appear to have remained in the home for several years.  When it was advertised for sale on March 20, 1921 the house was described as a “very high-class 4-story American Basement House.”  The notice pointed out that the free-standing residence had windows on all four sides—a rare plus in a townhouse.  The ad mentioned that there were six “master’s” bedrooms, four baths and “6 toilets.”

Although the house was leased and released over the next few years, it remained a single family home until mid-century.  Fifty-four year old Oscar Ebert lived here on March 9, 1937 when he planned a trip to Germany.  That day he went to the office of George Steinweg and dropped off $1,000 to be exchanged for German marks.

Steinweg was well-respected, having been in the foreign exchange business for 35 years.  But instead of providing Ebert with his marks, Steinweg made off with his cash.  Ebert sued and the case came to trial on July 9, 1937.  Other clients had also been defrauded, it turned out, bringing the total thefts to $15,000.  George Steinweg’s attorney, Jacob I. Horowitz, presented a bizarre defense.

He told the court that his client’s nose had been broken in an automobile accident a year earlier “and since then he had been so confused he neglected his foreign exchange business.”   Despite the creative defense, Steinweg was found guilty and on July 24, 1937 was sentenced to not more than three years in the state penitentiary.  Ebert, it seems, was out $1,000.

The Herman family lived in the house in 1939, the year that 10-year old Jerome Herman received first price in the “Best-displayed fish-guppies and other tropical fish” category of the Upper West Side Pet Show.  His was the last of the positive press residents of No. 330 West 76th Street would receive.

By mid-century the once lavish home was being operated as a rooming house.  Howard Brown, “a laborer,” lived here when he was arrested on June 2, 1954.  The New York Times reported “A 32-year old man, described by the police as ‘the brains’ of Westchester County’s ‘party bandits,’ was arrested last night in front of a tavern at 160th Street and St. Nicholas Avenue.”  Brown had organized a gang of burglars and carried out a string of robberies in the wealthy upstate neighborhood.

Harry Ramirez was another roomer.  The 21-year old’s uncle, Manuel De Jesus, was a passenger in Ramirez’s car on January 9, 1955.   According to Ramirez, he accidentally shot his uncle; but when a doctor arrived to find the 31-year old seaman dying in the front seat of the car, Ramirez fled the scene.

He was later held on $3,500 in his uncle’s death.  Records revealed that the young man had already been arrested three times.

Two years later another resident faced a judge.  Raudo Alvarez was arrested in April 1956 for disorderly conduct.  The 19-year old complained to Judge J. Randall Creel that his raucous behavior was not the reason he had been arrested, but “because I am Spanish.”  Considering his argument, Creel sentenced him “to write a song about the Spaniards who settled St. Augustine.”

Five months later Alvarez reappeared before Judge Creel empty-handed.  “When he appeared yesterday, Alvarez said he hadn’t had time to write the song’ he had been too busy,” reported The Times on September 8, 1956.  Despite this, Creek suspended his sentence, “noting the good probation report.”

Before the end of the century, the mansard roof was removed and two stories—which could be only described as an insult to Gilbert’s cultured design—were added, and the original stoop replaced.  But despite the architectural carnage, the lower three floors still suggest the refined lifestyles of the original residents.