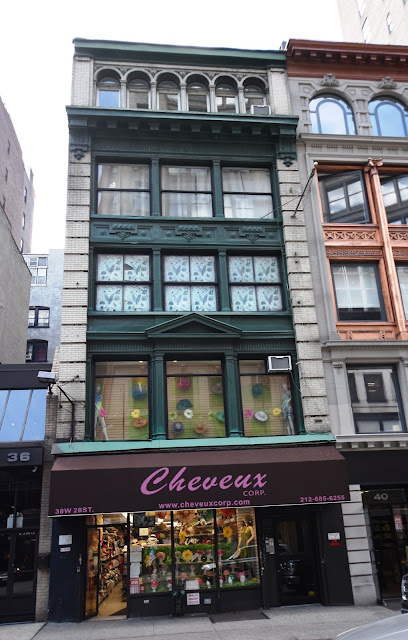 Well-do-to attorney H. Morrison and his wife lived in the comfortable four-story brownstone-fronted home at No. 39 West 28th Street in the 1870s.  In January 1874 an entertainment was held “in the parlors of Mrs. Morrison’s residence,” as announced in the New York Herald on January 6.   The event, given on behalf of the Ladies’ Benevolent Society, included “an amateur dramatic entertainment,” and “the pieces selected are ‘The Happy Pair’ and ‘The Little Treasure.’”

That Mrs. Morrison would host a type of musical theater in her home was somewhat ironic.  Within just over a decade the 28th Street block where she lived, between Fifth and Sixth Avenues, would be the center of the music publishing and theatrical booking industry—earning itself the name Tin Pan Alley.

The residential character of the neighborhood was already gone when H. S. Taylor leased the house in the early spring of 1891.  He commissioned the architectural firm J. B. McElpatrick & Sons to remodel the old brownstone into a modern office building.  The firm’s filing, on April 10 that year, called for “interior alterations and new front.”  The project would cost Taylor $4,000—around $108,000 today.

The transformation left no hint of the old Morrison house.  The beige brick piers that ran up the side of the central three-story section embraced grouped openings within a handsome cast iron frame.  The focal point was the classical pediment of the second floor upheld by Doric pilasters that lent a Greek temple effect.  The fifth floor, above a robust modillioned cornice, struck out on its own stylistic direction.  Here a graceful arcade framed the deeply-recessed windows.

H. S. Taylor was nationally-known as a theatrical agent.  Among his famous clients was actor Joseph Jefferson, one of the most famous of the 19th century American comedians.  Work on the 28th Street house proceeded quickly and on May 9, only a month after plans were filed, The New York Clipper noted “At present all is confusion in the four story building, which is being altered to suit the wants of the profession.  On the first floor the several little private offices partitioned off for the use of managers are ready for occupancy and present a neat appearance.”

The newspaper added “The building contains every improvement to make it a convenient place for out of town managers to do their booking, and some of the best attractions on the road will be represented.”  The Clipper published a long list of the managers and agents who had already leased offices in the building.  Also renting here was the publisher of Theatrical World, a “dramatic paper.”

Taylor named his renovated building Taylor’s Theatrical Exchange.  From his own offices here he managed the Bijou and the Fourteenth Street Theatre in Manhattan; the Park Theatre and the Lee Avenue Academy of Music in Brooklyn; and other theaters as far away as Philadelphia, Cincinnati, Boston, Providence and New Orleans.

On November 23, 1895 The New York Times reported “H. S. Taylor is expected home to-day from Europe, where he went to consult Minnie Palmer concerning her American tour in ‘The Schoolgirl,’ which will begin next month.”  Taylor would not be returning to West 28th Street, however.

Earlier that year, in July, John M. Hughes had purchased the building for $15,000 from the estate of John A. Haggerty.  Rather surprisingly, he did not renew Taylor’s lease on the building he had renovated only four years earlier.  Taylor moved his offices two blocks north to No. 1242 Broadway.

Instead of theatrical types, Hughes rented to apparel-related companies.  Among the first was the maker of fur garments, Henry Maerlender.  While business was going well for Maerlender, things at home were not faring so well.   They reached a climax on Christmas Eve 1896.

The next day The Sun reported “The Sheriff closed up yesterday the place of business of Henry Maerlender…who allowed judgment to be taken against him by Marie B. Maerlender on Wednesday for $6,019.”  The couple settled their untidy domestic and financial affairs, and Henry continued making furs in the building with his three employees through the turn of the century.

Also in the building were wholesale florists Traendly & Schenck.  Their advertisements in American Florist, beginning in 1896, touted that they “control the stock of many celebrated growers and are prepared to quote prices on First Grade Cut Flowers.”  Like Henry Maerlender, the florists would remain here into the 20th century before moving around 1909 to No. 131 West 28th Street, one block away where the wholesale flower district was developing.

Around 9:00 on the night of March 28, 1906 fire broke out in the paint store.  The flammable contents of the basement and store produced “explosion after explosion,” according to The New York Times.  The dramatic fire “drew a great crowd and caused excitement out of all proportion to the damage done.

The explosions were, however, dangerous and caused two of the responding fire fighters to be burned seriously on their faces and hands.  One of the burned firemen, Patrick Kerwin, insisting on going back into the building.  Blinded by the smoke he walked into an airshaft, falling 12 feet and breaking his ankle.

The Times reported “Interest in the fire was kept up by the continuation of the explosions.  The blaze would be under control apparently when a barrel of paint or some other inflammable stuff would burst, and the firemen would have to start all over again.”  When the fire was finally extinguished, the damages were estimated at about $15,000.

The riveted crowd proved tempting to a thief who chose the wrong victim.  The newspaper incidentally noted “While the crowd was the largest Akira Kanamareo, a Japanese, felt some one tugging at his scarfpin, a large diamond.”   Kanamareo was well-trained in martial arts.  “He caught the wrist of John C. Richards…and essayed a jiu jitsu hold.  Richards gave in, and was arrested.”

While Samuel Goldberg continued to manufacture women’s apparel here in 1909, his brother Louis (who went by the alias Samuel Goodman), was serving a life sentence in Sing Sing.  The Texas newspaper The Abilene Reporter wrote on Friday, September 17 that year “Goldberg, who is only 25 years old and a wayward member of a respectable family, was the first man to be given a life sentence for burglary from New York.”   The article noted “Samuel Goldberg felt that his brother Louis had dishonored the family name by his conduct and did not go to his assistance when he was arrested.”

Louis had already served on term in the penitentiary for burglary; and his second offense proved too much for his brother.  “When he evinced no desire to avoid bad companions and evil ways his family decided to let him go his way,” despite Louis’s insistence that he was innocent this time.

But then in September that year Samuel Goldberg received an astonishing letter from Henry Greenberg, a convict in Danemora Prison.   The writer said he had read about Louis Goldberg’s conviction and felt it his duty to confess.  “It was I, and I alone, who committed this crime,” he said.  “I say that your brother, who is now serving a life sentence in state’s prison, is as innocent of the crime for which he was thus sentenced as a newly born babe.”  The convict demanded “it is your duty as a man and brother, to procure justice for an innocent brother.  And that your brother is innocent I swear by the freshly covered grave of my mother.”

Greenberg’s letter softened the heart of the cloak manufacturer.  He hired an attorney, A. J. Levy, to re-investigate the case.

By now the building was filling almost entirely with apparel firms.  In 1912 the Pioneer Waist Co. manufactured waists—the most popular female garment of the day--and Kondell Brothers made dresses, employing 20 female workers.  In 1919 the Quiterite Skirt Co., the Florannel Dress Co., Selwell Skirt Co., and Lazarus Bros. furriers were here.

The high-end quality of the Lazarus Bros. stock was evidenced in February 1920 when the establishment was robbed by two men. The Fur Weekly reported “The value of the goods stolen is about $10,000.”  That amount would translate to about $235,000 in 2016. 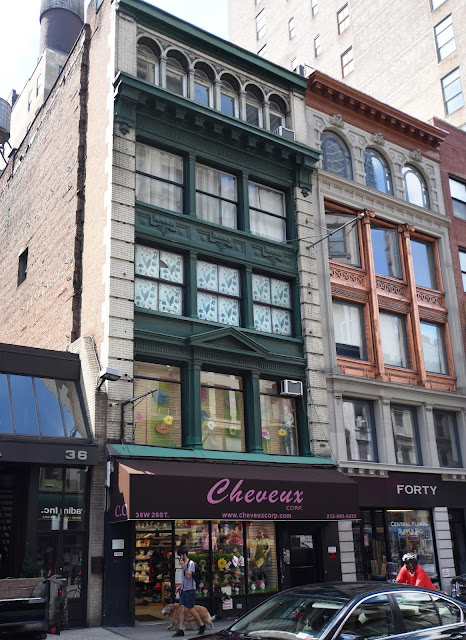 By mid-century the garment district had migrated north of 34th Street, changing the personality of the 28th Street block.  In 1951 the ground floor was, coincidentally, once again a paint store, Sol Weiner, Inc.  A clumsy attempt at modernizing the storefront at some point resulted in a regrettable loss of McElpatrick & Sons’ ground floor.  Nevertheless, the upper stories survive, a relic of the days when Tin Pan Alley bustled with theatrical agents, sheet music publishers and song writers.