Before 1865 New York City’s fire fighting depended on a disorganized collection of volunteer companies.  When a fire broke out, young men in the neighborhood called “laddies” would scramble to the fire house.  Nearby fire houses would vie with one another to arrive at the fire first, or to become more skilled at extinguishing it.  Most of the volunteer groups gained a reputation as rowdy, boisterous gangs whose fire houses were essentially social clubs.

But Americus Engine Company No. 6 was a bit more refined.  In 1854 an upscale home at No. 269 Henry Street was converted to a firehouse.  It was situated in the midst of one of Manhattan’s most exclusive residential neighborhoods.  The renovated interiors retained many of their luxurious details.
Nevertheless, its members—10 of whom lived permanently in the building in 1855--held blue-collar jobs; many of them maritime due to the nearby seaport.   That year the roster listed occupations like spar-maker, caulker, sail-maker, ship joiner, and stevedore.  Among the others were cartman, butcher, blacksmith, carriage-maker, cabinet-maker, marble-cutter and piano forte hardware.

In 1861 there were 48 members of Americus Engine Company No. 6, popularly known as the “Big Six.”  That year the firehouse received a shiny new steamer, built by Silsby, Mynderse & Co. in Seneca Falls, New York.  The Board of Aldermen’s inspection noted that the company’s 200 feet of rubber hose and 300 feet of leather hose were “in good condition.”

The days of American Engine Company No. 6 were numbered by now.  The devastating fire that destroyed Barnum’s Museum in 1865 along with pressure on the State Assembly by reformers resulted in the Act of 1865 that coupled Brooklyn and New York with a paid, united “Metropolitan District” fire department.

On September 5 that year The New York Times reported that the Big Six, in preparation “to give up housekeeping” was selling off its “furniture and adornments of their house” that day.  The items up for sale gave a hint of the comfortable accommodations here.  “Among the furniture are two cooking-stoves and a chowder-pot, a piano, music and stool, thirty velvet-cushioned chairs, and no less than five sofas.  Among the decorations are about one hundred oil paintings, some of them of considerable value.”

Two weeks later, on September 19, the Committee on Appointments and Discipline recommended “an engine company be organized, to be known as Metropolitan Engine Company No. 15, in the house formerly occupied by Americus Engine Company No. 6, stationed at No. 269 Henry-street.”

The professional Engine Company would make do of the aging accommodations for two decades.  In 1882 the first steps were taken to replace it with a modern fire house.   In December requests for “sealed proposals for furnishing the materials and labor, and doing the work required” for construction a fire house were made by the Fire Department.  Nearly a year later, in September 1883, the proposal of $18,200 by Mahony Bros. was accepted and the contract awarded.

The plans for Engine Company No. 15 had been filed on May 11.  For four years Napoleon LeBrun & Son had been the official architects for the New York Fire Department.  The firm’s designs were as handsome as they were utilitarian.  For Engine Company No. 15 it mixed Romanesque Revival with the newly-emerging Queen Anne style.    The cast iron base followed the customary fire house arrangement—two openings flanking a large central engine bay.  The lively capitals incorporated torches—emblematic of the fire department—and stylized sunflowers, an important Queen Anne and Esthetic Movement motif.  The sunflowers reappeared below the cornice, lining up as large terra cotta tiles.

Panels of saw-tooth brick separated the upper levels and created tactile interest.  The arched openings of the top floor, the nod to Romanesque, were joined by a single vaulting brick eyebrow.  On either side, ambitious brick console brackets embraced the cornice.  Here, too, was an important Queen Anne element, the sunburst.

The firefighters living and working from late 19th century firehouses faced great danger, not only from the fires and dangerous illuminating gas in the buildings; but from the steam-powered engines and the galloping horses that drew them.  And the public was often placed in peril as well.

On January 19, 1903 the Heyward Brothers & Wakefield Company chair factory on Madison Street caught fire following an explosion of benzene.  The New-York Tribune reported the blaze “was made exciting by falling walls, brilliant rescues and the jumping into a net of one of the victims.”

There were about 50 employees in the factory at the time, many trapped by the rapid spread of the flames following the explosion.  When Engine Company No. 15 arrived, they saw 23-year old Frederick Zimmerman standing on a sixth floor window ledge with flames licking close behind him.

With no time to run a ladder up to him, the firemen rushed to pull the life net from the hose wagon.  Civilians helped pull it taut over the sidewalk and Zimmerman was instructed to jump.  He thought about the six-floor plunge for a few seconds, then stepped off the ledge.  The Tribune reported “He kept his balance well in the air, and as he neared the net threw himself backward and landed in the net on his back.”

The crowd expected to see him bounce slightly in the net; but to their shock and horror he crashed through the net onto the sidewalk.  He was taken to Gouveneur Hospital with suspected internal injuries.

The other trapped employees were far more fortunate.  Daring rescues were made that night, at least one man being carried down a ladder on a fire fighter’s back.

Later that year, on July 22, Engine Company No. 15 responded to an alarm.  A crowd of children were playing on the sidewalk on Clinton Street when the fire engine tore around the corner from Henry Street.  Five-year old Sarah Adelman, unaware of the danger, started across the street.  The New-York Tribune reported “As unconcerned as if she were still playing on the sidewalk, she stood in the middle of the street.  On hearing the cries of women and seeing the swaying tender approaching, she became paralyzed with fear and made no effort to get out of the way.”

Michael Martin, driving the engine, realized that the team of horses was going so fast he could not slow them in time, nor even swerve to avoid the girl.  Taking a desperate change, he aimed directly for her, “trusting to luck that she would pass between the horses.”

Martin’s gamble worked.  Sarah stood motionless as the horses galloped by on either side of her.  She was knocked down by the pole and the tender passed over her without the wheels touching her body.  The little girl escaped with a cut on the head and a lesson learned.

The once-elegant neighborhood around the firehouse had substantially changed by now.  Fine homes had been replaced by tenements and the Henry Street area was one of immigrants, many German Jews.  Near the fire house, on Gouverneur Street, between Henry Street and East Broadway, was the East Side Kindergarten and Industrial School.  When an overheated stove set fire to the building during school hours on March 17, 1908, the principal did some quick and resourceful thinking.

Before Engine Company 15 could arrive, Mrs. Hill prevented the 500 children from being panic-stricken by announcing that classes were being let out early “as it was Purim.”  The New York Times reported “The children marched out quietly” and the fire fighters put out the blaze.

In the fall of 1910 an arsonist was determined, for whatever reason, to destroy the tenement building at No. 170 Clinton Street.  During the first week of November four unsuccessful attempts were made to set fire to the structure.  After those attempts failed, he apparently turned to the building next door at No. 172.  This time he was rewarded.

The fire started in the basement and spread rapidly through the airshaft.  It was discovered then 19-year old Jacob Andrer started down the stairway with his three younger siblings.  The residents of the building, mostly impoverished immigrants, were thrown into a panic.

When Engine Company 15 reached the scene, tragedy had already occurred.  Jacob Andrer had alerted his parents, 60-year old Rebecca Andrer and Rabbi Samuel Andrer, of the quickly growing danger.  There was no way down, so the family of six, who lived on the third floor, started up the fire escape to the roof.  Part way up Rebecca lost her footing on the rickety stairs and fell, nearly taking the rabbi with her.  Her body smashed on the courtyard pavement.

Fire Engine Company 15 rescued the other residents of the building, including the rest of the Andrer family and four children trapped in a fourth floor flat.
The heroism of the fire fighters was not reserved to conflagrations.  When the United States entered World War II, fireman Peter J. Dannhardt left Engine Company No. 15 to fight for his country.  He never returned.  The men of the station house pooled their money to pay for a bronze plaque in his memory.  Affixed to the firehouse wall, it was unveiled by his parents on his 30th birthday, July 6, 1946.

The station lost another firefighter in a bizarre accident that year. At around 3:30 on the morning of December 30, the Company responded to a ground floor grocery store fire at No. 234 Henry Street, just one block away.  The blaze was under control an hour later, but Engine Company No. 15 remained for “overhauling” operations.  At 5:25 the fire truck was just pulling into the firehouse when somehow 34-year old Daniel Krauss was thrown from the truck.  He died in the hospital at 6:49 that morning.

In 1975 the City was on the verge of financial collapse.  City employees, like sanitation workers, were being laid off or their number of work days cut back.  The closing of fire stations was seen as another cost cutting method.  When Mayor Abraham Beame’s administration announced that Engine Company No. 15 was on the list of stations to be closed, the neighborhood rebelled.  On July 11 more than 200 demonstrators marched in front of the Fire Department Headquarters on Church Street in protest.

Rather surprisingly, the protestors, many of whom were elderly, were heard.  Engine Company No. 15 remained active.  But then in 2002 the Company moved to a firehouse on nearby Pitt Street.  The old LeBrun-designed building sat vacant, its cast iron tag ENGINE COMPANY NO. 15 removed from above the bay doors. 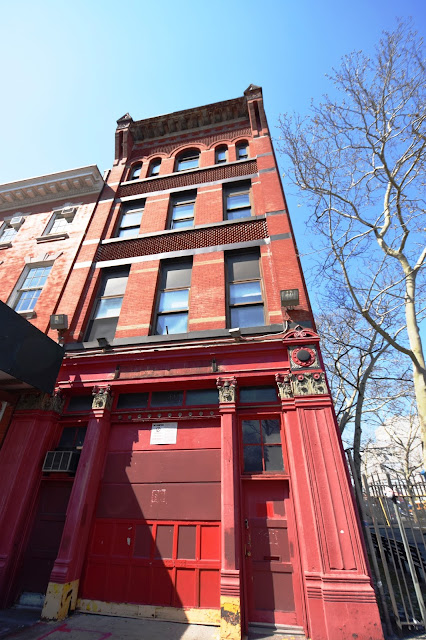 In 2007 the City transferred ownership to the Henry Street Settlement.  A repurposing plan designed by preservation architects J. Lawrence Johns & Associates and Beyer Blinder Belle Architects will result in a multi-function community and Settlement space while preserving the historic integrity of the design.