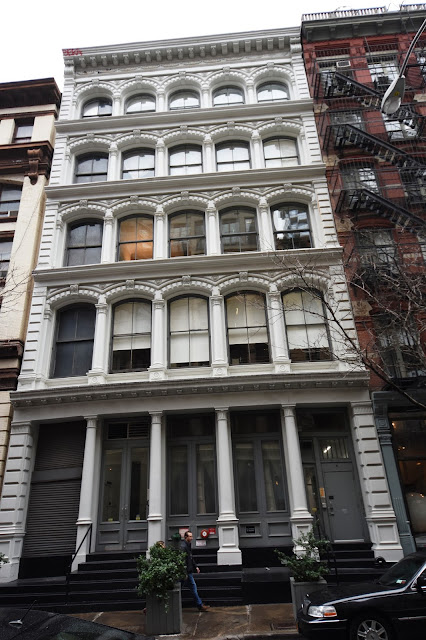 The transformation of the White Street block between Sixth Avenue and West Broadway from a quiet, residential street to a bustling factory block was dramatic.  In a matter of only a few years its two-and-a-half story brick Federal-style homes fell to be replaced by hulking modern loft and store buildings.

One of the little houses, at No. 10 White Street, had been converted for the use of a small delivery service by the end of the Civil War.  But it appears the company was going out of business by the fall of 1866.  An advertisement in the New York Herald offered “A covered express wagon, nearly new; a bay Horse, 7 years old, sound and kind, and Harness.”  The package deal was offered at $450.

For about a decade the use of cast iron facades had gained favor among builders.  The material was considered fire proof, prefabricated elements were quickly bolted into place, and the cast sections lowered construction costs by eliminating stone carvers and other craftsmen.  Now the districts which would later be named Soho and Tribeca were filling with cast iron fronted lofts.

The cast iron façade at Nos. 8-10 White Street, like most at the time, pretended to be stone.  Rusticated piers, engaged Doric columns, and scrolled foliate keystones closely mimicked marble emporiums or limestone lofts.  The four upper factory floors were flooded with natural light through the large windows; while the ground floor housed retail space.

The building was completed in 1870 and among the first tenants was Joseph H. Derry.  He diverted his attention from his business in the spring of 1871 to a more personal issue.  On April 21 he placed an advertisement in the New York Herald seeking information about “John Smith or J. Arlington Smith, native of Kelis, Ireland; he had served in some New York volunteer company during the war; when last heard from was studying medicine in New York.  His brother William has died in the South, leaving a considerable amount of money.”

William Vogel opened his wholesale men’s clothing business in the building around this time.  Born in Germany on May 21, 1839, he had arrived alone in America as a teenager in 1856.  He opened a retail clothing store on 23rd Street and Third Avenue and, according to The Sun later, “made a considerable fortune in woollens during the civil war, and from then on he was continually prosperous.”   His success allowed him to bring his parents and brothers to New York.  At least one of the brothers, Heyman, joined the firm.

William and Heyman were about to board a streetcar at Grand and Cortlandt Street around 5:00 on July 30, 1874 when a man “jostled one of them rudely on the platform,” as reported by the New York Herald.  He briefly prevented William Vogel from getting on the car; and then he suddenly jumped off and ran through the crowd.

As the streetcar began moving, Vogel realized that his $250 diamond stickpin was gone.  Detectives from the police headquarters were quickly on the case.   A little over a week later, on the morning of August 10, William and Heyman Vogel were called in for a police line-up of “a number of car pickpockets.”

Other garment manufacturers in the building included the shirt firm of Z. Stern & Co., and Simonson & Weiss, dress and cloak makers.  Brothers Zacharias and Emanuel Stern were forced to declare bankruptcy in 1877 with liabilities of $120,000.  It prompted the New York Herald to comment “Their failure is the heaviest in the shirt trade for several years past and has caused much surprise.”

William Vogel’s business continued to prosper and in 1893 he branched into the retail trade again, opening a massive store in the new Cable Building at Broadway and Houston Street.  On September 17 The New York Times reported “Trucks and porters have been busy during the last few days carrying enormous quantities of men’s and boy’s clothing into the spacious ground floor.”   The 25,000 square foot haberdashery was described by The Times as “magnificent.”

“If the spacious ceiling were of a blue tint, its 1,200 electric lights would make it look like a couple of acres of the firmament dragged down and anchored in Broadway for the special benefit of William Vogel & Son’s imposing enterprise.”

Newspapers pointed out that the clothing (“everything required in a masculine wardrobe”) would continue to be made in the Vogel shops.  The Times added that William Vogel, “By his energy, enterprise, industry, and familiarity with every detail of the business…has built up an establishment that in itself is a monument more imposing than a granite shaft or mausoleum.”

Along with William Vogel in the 1890s, the White Street building was home to British-based firm of Glendenning, McLeish & Co., makers of “fine linens,” (they remained from 1896 through 1916); Glen & Cawley Helter umbrella manufacturers, which employed 20 workers who put in 54 hours every week; and Max L. Raus’ Sons, menswear.

William Vogel’s success was helped by his apparently warm management style.  It was reflected in 1904 when the employees got together for a group Thanksgiving dinner.  The New York Times reported “The members of the firm have been invited to attend as honorary guests.”

In March 1905 the 66-year old William Vogel underwent an abdominal operation in the German Hospital.  He died there on Sunday night, March 26.  Newspapers noted his philanthropies, The Times mentioning “He gave a great deal of money to charity and it was done in an unostentatious way.”

The A. M. Hinman Corporation signed a long-term lease in March 1917 for the entire building, still owned by the Bolles family.   The Sun noted on March 29 that “extensive alterations are to be made.”  Indeed, the owners hired architects Harry H. Holly and H. F. Smith to do $15,000 in alterations the following month.

The firm would remain in the building for years, providing “export baling and packing” and “dry goods refolding” services.  A separate storage warehouse for textile wholesalers was located nearby on West Broadway. 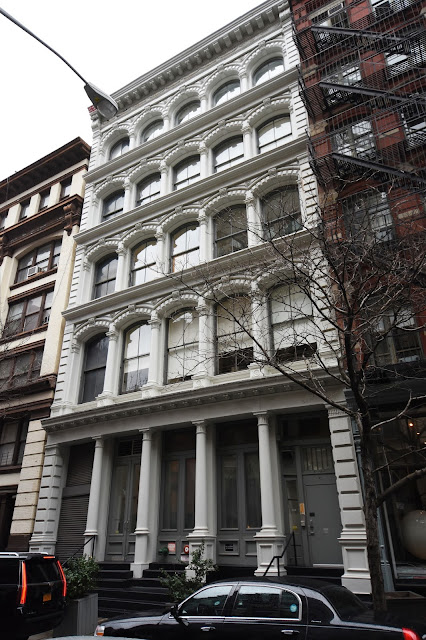 In 1983 the life of a factory building came to an end for Nos. 8-10 White Street as the Tribeca neighborhood became a trendy club, restaurant and upscale residential district.  The upper floors were converted to residential space; while the 19th century retail storefront survives astonishingly intact.