Prior to the Revolutionary War the area known as Turtle Bay on what would become the Upper East Side was bucolic.  The summer estates of wealthy New Yorkers like James Beekman and Francis Bayard took advantage of the river breezes and views.

But by the last quarter 19th century the riverfront was lined with gritty industry.  Slaughterhouses, breweries and cigar factories erected here, far from fashionable areas, could not offend the noses and ears of well-to-do Manhattanites.  Instead, the long block of East 53rd Street between First Avenue and the East River filled with tenements and small houses which accommodated the working class immigrants who worked in the factories.  Among them was the two story brick house at No. 413 East 53rd Street.

There was little money spent on the little house.  A stone stoop led to the first floor, above a shallow English basement.  Unadorned stone lintels capped the openings and a pressed metal cornice with decorative frieze.

By the time Charles Anthony sold the house in September 1900 it had already been converted to what the Real Estate Record called a “brick tenement.”  The buyer, Gustav Peetz, resold it within a few months to William B. Kirk and his wife, Annie L. Kirk.

Kirk had earlier been active in politics.  From 1867 to 1869 he was a member of the State Assembly, and was President of the Board of Aldermen in 1884.  Now he and Annie were essentially slum lords.  They owned and operated tenement houses throughout the city, most of them in the squalid Bowery and Madison Street areas.

On the evening of May 21 that year William Evans approached a policeman at the corner of Fifth Avenue and 45th Street.  He told Officer Fletcher that he had just been assaulted by four “ugly-looking men.”  Evans was a butler in the upscale home of Mrs. Mary Dean.  His wife had been waiting for him on the sidewalk outside the house.  Just as Evans came down the stoop, the men had attacked.

“After I had been knocked down her cries scared the men and made them run away,” he told Fletcher.  Mrs. Lotta Evans chimed in “The men were the ugliest I ever saw.  One of them had very long hair and a red face, the whole side of which was deformed by a mass of scars, as if it had been cut away.”

As she talked, a bystander listened.  He told the officer “I saw four men who answer this description go into Heatherington’s drug store, across the street from the Grand Central Station, not more than a minute ago.  Hurry down there; maybe you can catch them.”

The trio headed to the pharmacy, joined on the way by Policeman McKee.  When they arrived, Lotta Evans pointed to Edward Walker and cried “There is one of the men.”  The 23-year old waiter’s face was, indeed, heavily scarred.  With him were Francis Knox and Thomas Karnes.  And on the floor at their feet was the John Wynne, a plumber, whose neck had been so severely slashed that, according to The New York Times, “the head had almost been severed from the body.”

Edward Walker and his vicious cohorts were taken to the station house where Thomas Karnes insisted that “he and his companions had found Wynne lying in the street and had taken him to the drug store out of sympathy.”

Also rooming in No. 413 that year was Stella Brophy.  She was a prostitute working for John De George, who went by the alias Delane.  Today he would be called her “pimp.”    She found herself in the uncomfortable position of testifying against Delane in 1913 when he was charged with “securing from one Henrietta or Jeannette Annette the proceeds of her prostitution.”  Delane received $5 for each of his prostitutes’ acts (about $125 today).

She had to tell the jury about the day that Delane brought Jeannette to her room in the 53rd Street house.  It seems that the boarding houses where Jeannette brought men had been repeatedly evicting her for her disreputable behavior.

Partly on the basis of Stella’s testimony in 1914 John Delane was found guilty of “compulsory prostitution” and for receiving “the sum of five dollars, without consideration, from the proceeds of one Henrietta Annette, a woman engaged in prostitution.”

That same year the building became “part of a contest” of William B. Kirk’s will.  The ugly battle pitted the trustees of the estate against Annie L. Kirk.  It ended in October 1917 when eight of Kirk’s tenement houses, including No, 413 East 53rd Street, were sold to liquidate the estate.  The sales advertisement by auctioneer Joseph P. Day described most of the properties as “tenements;” but called the 53rd Street building “a two-story and basement brick dwelling.”

The new owner, Jacob Forster, removed the stoop and converted the basement to a shop.  It became home to the Murray Hill Sheet Metal Works which employed five men.  But Forster would not hold onto his newly-renovated property for long.  On August 1, 1918 he sold it to the Benevolent Society for the Propagation of Cremation.

The Society was, in essence, an insurance company that paid for the mortuary costs of its “members” and paid a $100 death benefit.  There was an initiation fee based on the age of the inductee.  Those under 50 years old were charged $1.25 and for each additional year of age the fee increased by $1 to the age of 54, and $2 thereafter.  No one older than 60 was admitted.

Within a year of moving into the 53rd Street building the Society had a membership of 4,967.  The Society cautioned “The death benefit in every case is $100, but the claim is not payable unless the body is cremated.  The only exception to this rule is the case of a death at sea where cremation is impossible.”

Both the Benevolent Society for the Propagation of Cremation and the Murray Hill Sheet Metal Works were gone by 1927.  Seven years earlier wealthy socialites Elisabeth Marbury, Anne Tracy Morgan and the widowed Mrs. William K. Vanderbilt had erected neo-Georgian mansions nearby on Avenue A, which was by now called Sutton Place.  The exclusive enclave attracted other millionaires, prompting a dramatic change to the East 53rd block.

Now The Oxford Antique Co., Inc., importers of pricey European antiques operated in the house once home to thugs, prostitutes and a sheet metal shop.  In 1940 The Powgen Press was here, and in 1964 Don Ruseau, Inc. opened.  The shop turned out quality reproduction furniture by skilled craftsmen.  Jane Templeton, who ran the shop with Dominic Cavanna, explained to columnist Virginia Lee Warren of The New York Times in August 1964 that master furniture makers taught apprentices in their workshop here.

“Of her 20 craftsmen, mostly French and Italian, one is 74 and the majority of the others are in their 50’s,” reported the article.  It added “Almost all the craftsmen now at work were trained in Europe, often starting as apprentices at the age of 11 or even younger.”

Don Ruseau, Inc. would remain in the 53rd Street building for decades.

Then, in 1998 the former working class house was given a startling make-over.  A dentist office was installed in the ground floor and the upper two stories became a single-family home again.  The transformation created interiors worthy of its Sutton Place neighbors. 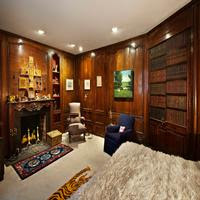 Today the tiny house is surrounded and overpowered by modern, soaring structures.  Passersby can little imagine the colorful histories that have played out behind its unassuming façade.