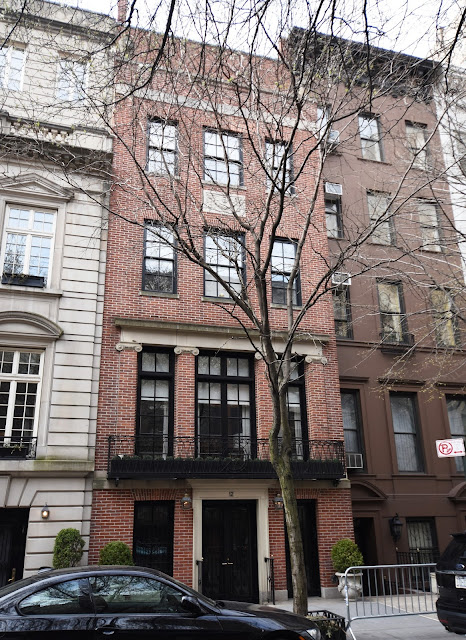 Although architects Arthur M. Thom and James W. Wilson designed some prominent structures—the Centre Street Criminal Courts Building, the impressive Nevada Apartments, and the Harlem Court House among them—they would be most known for their innumerable rows of speculative cookie-cutter rowhouses they cranked out for developers.  Among these was a row of 11 brownstones erected between 1883 and 1884 for developers William and Ambrose Parsons on East 81st Street between Fifth and Madison Avenues.

On May 15, 1884 Max Goldfrank purchased No. 12.  As was customary, the title was put into his wife’s name.  With Max and Bertha Goldfrank in their new home were son Walter and daughter Edna.  The family existed quietly, their names appearing in society pages rarely.  An exception was the announcement of Edna’s engagement to J. A. Strausser on October 30, 1905.

Sweet was the principal of Sweet, Orr & Co., manufacturers of work clothing.  The company was founded in 1871 by Irish immigrant James A. Orr with his nephews Clayton E. and Clinton W. Sweet to manufacture overalls.  The men renovated an old oilcloth factory in Newburgh, New York into the first factory in American for making overalls.

The company begun by the three men who invested every penny of their meager savings was by now hugely successful and Stanley A. Sweet, son of Clinton W. Sweet, had garnered a substantial fortune.  He was, in addition, a director in the American Hard Rubber Company, the Fulton Trust Company, the Union-Made Garment Manufacturers’ Association and the International Association of Garment Manufacturers.

Sweet was married to the former Grace A. Ingersoll and the couple had two sons, 3-year old Stanley, Jr. and 7-year old Clinton.

But before the family would move in, Sweet engaged architects Hoppin & Koen to transform the outdated brownstone into a modern residence.  Before the decade was out the 81st Street block would see other high-stooped houses re-made into stylish neo-Federal homes.  The Sweet house would be the first of them.

The architectural trend embraced by Hoppin & Koen had begun about two decades earlier.  They replaced the brownstone with a prim colonial-inspired façade of red brick trimmed in limestone.  American basement plans—whereby the entrance is at or slightly below street level—was highly favored at the time and did away with the high stone stoop.  With the projecting stoop gone, the architects were able to pull the façade out to the property line, increasing interior square footage.

The centered entrance sat below a neo-Federal wrought iron balcony.  Elegant French doors, flanked by French windows, opened onto the shallow balcony.  The openings were separated by brick pilasters with stone capitals which upheld a limestone entablature and cornice.  Together, the elegant grouping formed the focal point of the design.  The fifth floor sat back behind a brick parapet, creating a private terrace.

It appears that Grace Sweet and the butler, named Simmons, came to a mutual agreement in 1922.  On May 4 that year he placed an advertisement in the New York Herald seeking work.  “Experienced, well trained Englishman, medium height, neat appearance, 36 years old, would like situation as butler and valet.”  Although Simmons explained he was to be “disengaged May 15,” he was still living in the house and offered “excellent references.”

Before joining his father’s company, Stanley Sweet had studied art in Paris.  Throughout his life he continued painting.  He was a member of the Business Men’s Art Club, a group of professional men whose hobbies were painting and sculpture.

The family received a scare on August 23, 1932 when Grace and the boys were upstate, along Lake Erie.  Their chauffeur was driving east near Westfield, New York, while the automobile driven by Donald McMasters of Akron, Ohio was traveling west.  The Associated Press reported the two cars “came together.”

The collision was no fender bender.  Clinton Sweet suffered a fractured jaw and severe lacerations to the head; Grace broke an arm; and Stanley Jr., now 16, had a broken left leg.  One passenger in the McMasters automobile was taken to the hospital, as well, with cuts.

The socially-prominent position of the Sweet family, as opposed to 19-year old Akron native Myrtle Smith, was evident in the New York Times headline.  “Mrs. S. A. Sweet is Hurt With 2 Sons in Crash,” “Girl Also is Injured.”

In the 1930s, while other moneyed New York families relaxed in fashionable winter resorts like Palm Springs and Miami, the Sweets routinely went to Bermuda.  On March 21, 1937, for instance, newspapers noted that Grace and Stanley, with Stanley Jr., sailed “yesterday to pass some time in Bermuda.”  They would continue the tradition into the 1940s.

In the meantime, Stanley continued painting.  In 1932 he displayed “Tide Water Creek” in the Business Men’s Art Club show; and later his works were exhibited at the Salamagundi Club, the Yale Club and the University Club.  He received prizes for the latter two.

Following Stanley Jr.’s marriage to Barbara McGraw (of the well-known publishing family), Stanley and Grace lived on in the 81st Street house with their domestic staff.   The couple purchased a summer estate in Old Saybrook, Connecticut.  It was there, while playing golf, that the 67-year old Stanley Adams Sweet suffered a fatal heart attack.

Sweet’s estate was valued at over $4.2 million.  Grace stayed on in the 81st Street house for three years, selling it “for cash” in October 1955 to attorney Irving Lent.  Lent would be the first of several owners over the next few decades, including Edward Joy who sold the house for $325,000 to John Vanneck in December 1968.

In 1980 No. 12 was home to Dr. Raul Roa Kourithe, Cuban delegate to the United Nations.  Disaster was luckily avoided on the morning of March 25 that year when Kouri’s bodyguard noticed a black plastic trash bag stuffed under his car parked in front of the mansion at around 10:30.

Suspicious, the bodyguard removed the bag to a trash can and went to call police.  In the few minutes he was gone a sanitation crew emptied the trash can into their truck.  Officers from the Bomb Squad caught up with the truck and found the explosive device, which they successfully defused.

The anti-Castro terrorist group Omega Seven took responsibility for the bomb.  They were already linked to many bombings in the New York and New Jersey area.  An anonymous caller to The Associated Press said “the group intended to keep trying to kill Dr. Roa Kouri.”

In 1999 telecom research analyst Jack Grubman and his wife LuAnn purchased No. 12 for about $6.2 million.  Not long after he was barred for life from the securities industry for inproprieties.  However, as Max Abelson commented in the Observer on October 7, 2008, “But a nice townhouse can cushion the blow of public disgrace.”

The Grubmans listed the mansion in 2008 for a staggering $32 million.  The price tag was apparently too steep even for the posh Upper East Side neighborhood; and two years later the house was sold for $19.6 million.

The dignified house remains a single-family residence after more than 130 years.