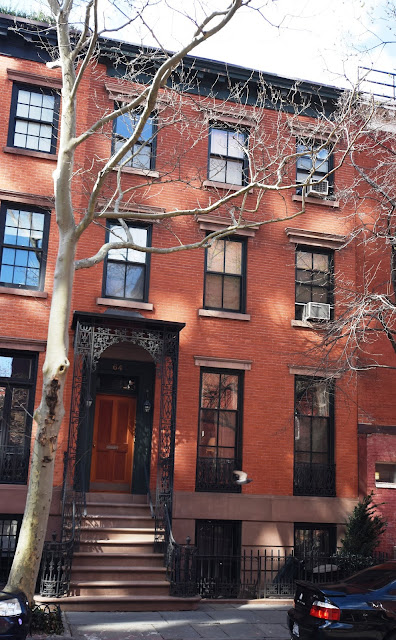 In 1750 the Jaynes house was built on the country lane that ran essentially east-west and led to the family’s farm.  The road also served as the boundary line between the summer estates of the wealthy Bayard and Ludlow families.   Nearly a century later when mason Stacey Pitcher considered erecting five rowhouses on the street, Greenwich Village was no longer rural and Jayne Street had lost its “y.”

Pitcher, who operated from No. 117 Crosby Street, was highly active in the Village at the time.  His five brick-faced Greek Revival-style residences would fill the entire block from Hudson to Greenwich Street.  Begun in 1848, they were completed a year later.  The end houses faced onto Greenwich and Hudson Streets. 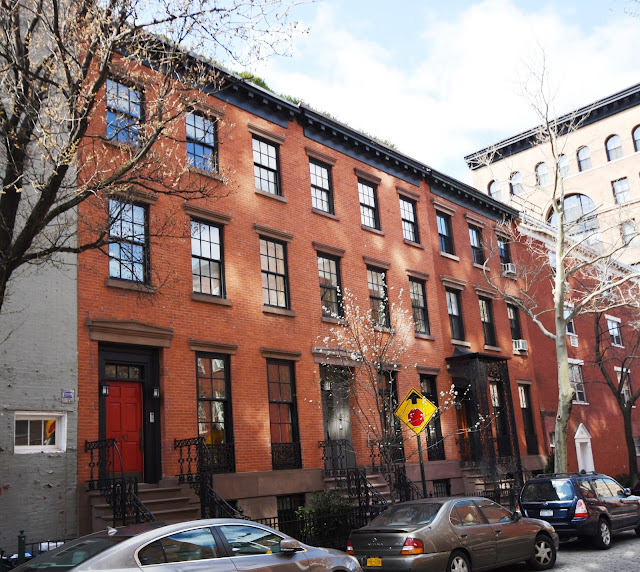 No. 64 Jane Street was identical to its two neighbors.  Three stories high above a rusticated brownstone English basement, it boasted exceptionally fine cast iron fencing and stoop railings.  The square, openwork panels between the stoop and landing railings at No. 62, next door, suggest that all three homes featured the ornate Italianate cast iron porch that survives at No. 64.  A shallow brownstone pediment above the entrance reflected the Greek motif; and the three houses were visually connected by identical modillioned cornices.

No. 64 became home to the family of Capt. John Joseph who had married the widowed Nancy Town on July 31, 1836.  The couple had a son, John F. Joseph.  The residence reflected Capt. Joseph’s comfortable lifestyle; and at some point he upgraded the exterior by adding pronounced sheet metal cornices above the upper windows. 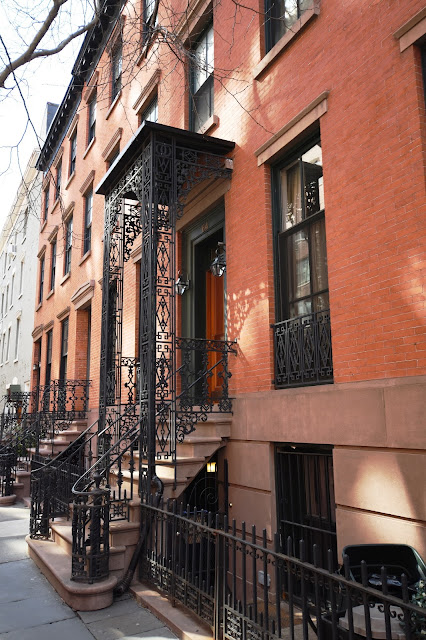 Things, however, would change for the captain’s wife when he died suddenly in house at the age of 58 on Tuesday, May 5, 1857.  Victorian widows often suddenly found themselves in financial straits.  Untrained to make a living on their own, they sometimes ended up in homes for “respectable, destitute women.”  Nancy Joseph’s money was apparently running out by 1863 when she placed an advertisement in the New York Herald on Saturday, September 5:  “Unfurnished front and back rooms, with pantries, on the second floor, gas, &c., to let, to a gentleman and wife or single gentlemen, with good Board, at 64 Jane street, near Abingdon square.”

Her single gentleman boarder, H. Vanderbilt, had to leave Jane Street when he was inducted into the Union Army on March 15, 1865.  In his place by 1868 was Anna A. McCoy, a teacher in the nearby Grammar School No. 3 at the corner of Hudson and Grove Streets.

Nancy’s financial condition apparently did not improve.  On March 11, 1869 she placed a nearly heart-wrenching ad in the New York Herald in an attempt to lease the house.  “To Let—A very nice, cosy, three story brick House, in Jane street, to a private family; good neighborhood.  The owner, a widow lady and little boy would like to board with the family.  Call at 64 Jane street.  Mrs. Joseph”

Nancy Joseph had no takers and she soon operated her home as a full-fledged boarding house.  Within a few months of her advertisement another school teacher joined Anna McCoy in the house.  Harriet H. Jones taught in the Primary Department of School No. 32 on 35th Street near Ninth Avenue.

Nancy’s single servant was either underpaid or overworked.  For whatever reason, she looked for another job in March 1870.  Her ad read “A respectable woman as plain cook, washer and ironer; good bread maker, also a grown girl to mind children and go errands.  Can be seen at present employer’s.”

Nancy Joseph tried to lease the house to a family once again in February 1871, adding “the owner would board in the house if agreeable” to her advertisement.  But once again there was apparently no interest.

Tragedy visited No. 64 in 1874.  General John E. Bendix had distinguished himself in the Civil War.  Born on August 28, 1818 on the steamer Sarah on the St. Lawrence River, his immigrant parents soon returned to Germany where he was educated.  He returned to New York while in his teens and joined the State Militia in 1847.

The New York Times later recalled “At the outbreak of the Rebellion Gen. Bendix organized the Seventh Regiment of Volunteers.”  At one point during the war he commanded over 900 men and was active in the battles of Bull Run, Antietam and Fredericksburg, where he was seriously wounded.

General Bendix retired from military service in 1871.  He, his wife Mary and their daughter Ida, moved into the Jane Street house.  On Saturday, May 16, 1874 17-year old Ida died of heart disease.  Her funeral was held two days later in the parlor here.

The term “engineer” in the 1890s was a nebulous one.  It could refer to a locomotive operator, a designer of bridges and roads, or a building maintenance employee who tended boilers and other equipment.  Whichever Cushing was, he was out of work in April 1896.  His nondescript position-wanted ad described himself as a “good and reliable man; years of experience.”  When he found himself unemployed again in 1902, he replaced the word “good” with “sober” in his advertisement.

On June 6, 1908 16-year old Wesley Beaser left his room in the house and did not return, telling police two days later he “had since been wandering about the streets.”  His wanderings got him a ticket to jail after he and two thugs tried to rob an out-of-towner just before midnight on June 8.

Henry A. Smith, in town from Portland, Oregon, was staying at the Democratic Club at No. 617 Fifth Avenue.  He left the club to take a late night walk and just as he was in front of No. 5 West 49th Street, Beaser and his accomplices jumped on him, one hitting him with a blackjack.  What they had failed to noticed was that a Holmes private watchman, Henry McGlinn, was standing in the doorway at No. 1 West 49th Street.

The New York Times reported “As he went down the others closed in on him, but at that instant McGlinn ran from the cover of the doorway where he had been standing and ran to Mr. Smith’s assistance.  As he did so he drew his revolver and fired two shots.”

McGlinn chased the assailants and caught one of them—unhappily for Wesley Beaser, it was he who was captured.

On April 4, 1911 Stephen Woolridge transferred the $3,000 mortgage to his tenant George Heath; while retaining the title.  Later that year, on Saturday November 25, Heath’s 84-year old father, Rev. John G. B. Heath, died in the house.

George Heath apparently changed his mind about purchasing No. 64 before long.  In September 1913 Woolridge sold what The New York Times described as “one of the old-fashioned houses of Greenwich Village” to Michael and Maria Burke.  Tragically, only four months later, on January 27, 1914, Maria died in the house.

In 1917 New York City suffered the worst heat wave in 16 years.  July that year was the hottest on record.  On August 1 the New-York Tribune reported “Dazed by the sun, stifled by the moisture filled air, men, women children were overcome by the score.  At 11 o’clock last night the city’s total was 194 prostrations…Horses died by the score in New York, and the intense heat went further in its search for victims and killed even dogs and cats.”  By the following day the human death count had reached 108.  Among them was 52-year old Michael Hanlon, who boarded in the Jane Street house.

Throughout the rest of the century tenants would come and go; including 28-year veteran of the New York Police Department, Peter J. Carmody who was here in the 1920s; and author Bryce Gorman in the 1950s. 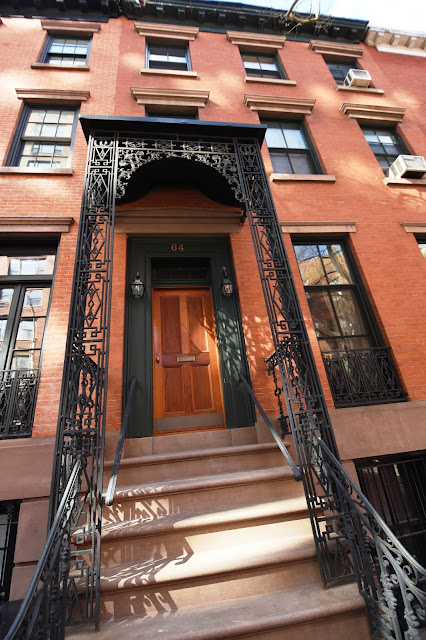 Through it all the handsome 1849 house retains its charm and dignity.  There are still three apartments in the building.  Despite its modern doorway, the passerby can still imagine Nancy Joseph climbing the brownstone stoop in her black widow’s weeds.