Architect Charles Duggin was actively developing the east side of Manhattan in the years following the Civil War with his partner James Crossman.   A young, promising architect, Charles Buek worked for the partners as they designed rowhouses for Manhattan’s middle and upper classes.  When the firm dissolved, Buek established his own practice, as Charles Buek & Co., and took Charles Duggin with him as partner.   Now not only did Charles Buek act as both architect and developer; by the turn of the century he would be the principal in the Charles Buek Construction Company as well.

Buek designed and erected speculative residences throughout the city.  In 1897 he turned his attention to the Upper West Side’s answer to Fifth Avenue—Riverside Drive.  A year earlier prolific architect Clarence True had started construction of high-end Elizabethan Revival mansions which filled the block between 76th and 77th Street.   But for some reason one plot, No. 42, was not included.

Buek purchased the plot amid the True houses and in 1897 started construction.  His design was a liberal mixture of historic styles, deemed “Eclectic Renaissance” revival.  Engaged Tudor-style columns flanked the offset doorway.  A swelled four-story bay vied for attention with a double-height angled bay above the entrance.   The fourth floor featured a full balcony over the angled portion and a charmingly diminutive balcony which clung to the rounded bay.  Above the sumptuous copper cornice was a red-tiled roof with elaborate conical dormers. 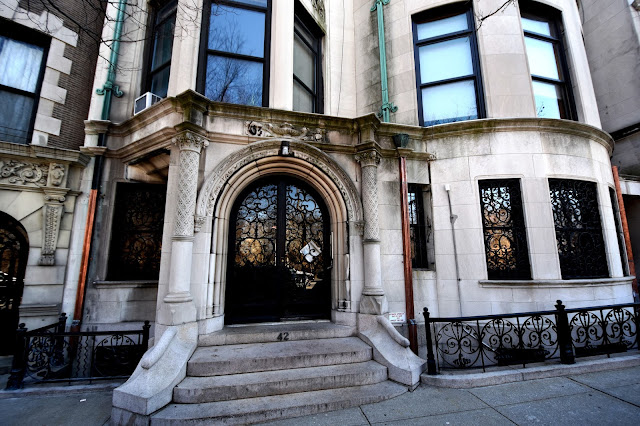 The 40-foot wide mansion was completed in September 1898 and on October 9 Charles Buek, promoting himself as “architect and owner” advertised it.  Calling it “this magnificent five story American basement Mansion,” he boasted of its “spacious drawing room in ivory, enamel and mahogany; library in old mahogany, dining room in quartered oak, besides imposing entrance hall, reception and billiard room.”

The house contained ten family and five servant bedrooms, along with five bathrooms, “all richly tiled and fitted with exposed nickelled plumbing.”  The latest in residential convenience was the “electric elevator stopping automatically at every story.”

It would be six months before Buek attracted a buyer; but finally on April 6, 1899 The New York Times reported he had sold No. 42 to William L. Brown.   Brown evidently had no plans to live in the mansion; but used it as rental income.

Among his tenants in the next few years were F. H. Cooper, who signed a lease “for a long term of years” in April 1903; and William Douglas, whose wife gave a musical on March 10, 1906.  But by the time of Mrs. Douglas’s entertainment, the house was no longer being used as a private home.  She had initiated what would be a decades-long tradition by opening the Riverside Drive Boarding and Day School in the mansion.

In 1907 William Brown leased No. 42 to Howard D. Miner and his wife, the former Katherine White.  The couple ran The Graham School—New York City’s oldest private school for girls.  Founded in 1816, it could boast illustrious instructors throughout the years like Elihu Root.  Highly exclusive, its students ranged from primary through college preparatory age and came from the wealthiest families in the East.

The Miners, of course, lived in the house along with their resident students.  It was here on November 26, 1912 that Katherine, only 35 years old, died.  Howard continued with the school, now taking on Katherine’s sister, Mary Josephine White, as assistant principal.

In 1913 the Graham School initiated what some stodgier socialites thought was rather pointless—postgraduate courses.  But the school explained “Many girls finish their regular school work, graduate, do not go to college, and wish a certain amount of advanced study adapted to the older and more developed mind.”

The Sun, on September 14, 1913, explained that female students were not expected to have the academic backgrounds of young men—the understanding of Greek and Latin, for instance.  “But to-day fortunately the classics are also available without the hampering medium of language acquisition.  Good translations from the Greek and Latin are used, and thus, for example, one may become acquainted with the Greek tragedians in substance without the laborious effort of studying Greek.”
The Graham School left around 1916 and William G. Osgoodby leased the house.  As well as his residence, he used it as headquarters for his somewhat shady International Motor Club, Inc.  He had come up with the idea in 1914 and advertised to motorists that for a “reasonable” fee they could join for life.  He promised that among other benefits was “the club’s influence if they were arrested for overspeeding.”

The initiation fee was $25 and dues ranged from $12 to $250 (the highest amount translating to more than $6,000 today).   His money-making scheme, with “several branches in Massachusetts,” came to a screeching halt on May 23, 1918 when Assistant District Attorney Kilroe knocked on the Riverside Drive door.

The New-York Tribune said that the Assistant D. A. was “acting on information obtained in an anonymous letter.”  After interrogating Osgoodby about the operations of the “club,” his suspicions were confirmed.   The money was going directly into Osgoodby’s pockets.

“Osgoodby, Mr. Kilroe said, admitted that with the exception of about $5, he got most of the initiation and due fees,” reported the Tribune.  Osgoodby was not prosecuted, but he promised “to cease soliciting new members here”

When Henrietta Brown sold the house in February the following year it was assessed at $76,000.  The Sun reported “The buyer is a businessman from New Jersey who will occupy it after extensive alterations.”

That New Jersey businessman was Charles M. Schweinert, president of A. Schrader’s Sons, Inc., makers of pneumatic tire valves.   The 48-year old entrepreneur, indeed, did extensive alterations.   The year-long “fitting up,” as the New-York Tribune described it, would cost Schweinert $150,000.

While renovations were going on, other upscale residents of the block were loudly complaining to the City about the city dump at the river’s edge at 79th Street.  Every evening rubbish was burned there and neighbors protested about “the offensive odor and danger,” according to the New-York Tribune.  The newspaper noted “complaints brought nothing…except an explanation from the Street Cleaning Department that the rubbish had to be burned because there were not scows enough to handle it.”

Finally, early in April 1920, Schweinert, his wife, Mary, and their daughter Marjorie were able to move into the redecorated mansion with their domestic staff.  They had been in the house about three weeks when their dinner was interrupted at about 7:10 on the night of April 24.

The New-York Tribune reported “Suddenly a white-faced maid burst into the room and, heedless of the shocked remonstrances of the butler, cried to Mrs. Schweinert, “Please, ma’am, there’s a gentleman at the door and he says the house is afire and he has sent in an alarm.”

The family rushed onto the sidewalk, only to see the entire top floor of their home in flames.  It appeared that embers from the trash fires below the park had landed on the roof, starting the blaze.  As the family stood in shocked disbelief, they watched the top three floors of their newly-redecorated home destroyed.

Schweinert told a reporter that between fire and water damage, “all the renovating which he had accomplished at such expense of money and patience, was a wreck.”

Despite the disheartening turn of events, Schweinert rebuilt the mostly gutted mansion.  The former tiled roof with its conical dormers was replaced with a flat-faced upper story featuring a series of large arched openings.  The new design resulted in a spacious top-floor terrace.

Schweinert retired in 1922.  In November 1926 he and Mary traveled to London, checking into the fashionable Savoy Hotel.  There, on New Year’s Eve Charles M. Schweinert died at the age of 57.

Mary Schweinert and Marjorie (now married) inherited the bulk of Schweinert’s estate, the gross amount of which was $1.16 million.  Mary lived on in the Riverside Drive mansion, the Schweinert summer estate in Brielle, New Jersey, and a house in Miami.   But it was apparently a lonely life for the widow and she would be drawn into scandalous law suit before very long.

In July 1927 Edith Jacobs, a young private secretary, met Joseph J. Gottman, a medical student.  A romance ensued and by October they were engaged.  Edith gave her future husband $14,000 of her savings to help him pay for medical school and expenses.

And then Mary Schweinert came along.  When Gottman broke the engagement, Edith sued Mary, alleging “that although Mrs. Schweinert knew Gottman was engaged to the plaintiff she won him away from her by giving him presents, entertaining him at her home here and in New Jersey and Miami, Fla., and took him abroad with her.”

The suit, filed in May 1932, sought the $6,400 Gottman had not yet repaid.  Edith had no expectations that her former fiancé could ever pay the debt since, thanks to Mary, he had “forsaken a gainful occupation.”  She also asked for $250,000 damages to help heal her broken heart.

By now Mary Schweinert was apparently spending less and less time in Manhattan.  The year following the law suit, she converted the Riverside Drive mansion into 12 apartments; keeping one for herself.  She was still living here in 1938 when she went to the Marlborough-Blenheim Hotel in Atlantic City .

On the night of June 5 she entered the Apollo Theatre on the Boardwalk.  Having paid for her ticket, she pressed her handbag under the arm on which she carried her coat.  Later, when she stood up to leave, she realized her handbag was missing.  A search of the theater was made, but the bag was gone.

In the handbag, according to Mary, were not only her platinum spectacles, but five pieces of jewelry valued at $30,000.  Why she would be carrying around jewelry worth half a million dollars by today’s standards was not explained.

Throughout the decades the tenant list in No. 42 Riverside Drive included some celebrated names.  In 1939 opera and concert artist Mme. Grete Stueckgold leased an apartment.  Following Bella Chagall’s death, artist Marc Chagall took an apartment with his daughter; and in the 1950s motion picture and television actor Paul Valentine lived here. 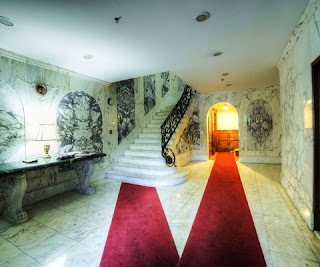 In 2001 the mansion received another renovation resulting in 11 apartments.  Tragically, while the entrance hall retains a hint of the mansion’s former glory, most of the 1920 interiors have been stripped bare.
non-credited photographs by the author
Posted by Tom Miller at 2:49 AM