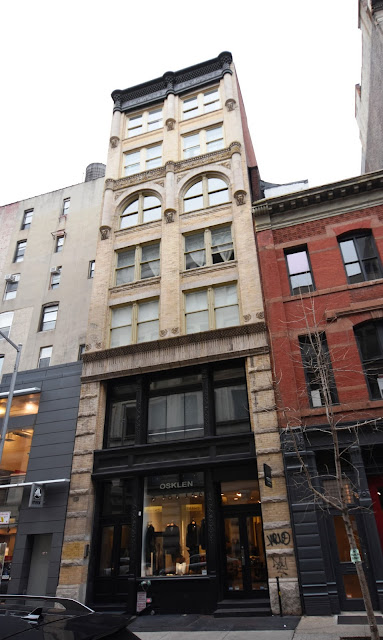 In the years following the Civil War the block of modest brick-faced homes on Wooster Street between Prince and Spring Street had seen significant change.  One block to the east, Greene Street was a notorious red light district; and the Wooster street houses were now being used for a variety of purposes.

In 1867 No. 97 Wooster Street was converted to a Young Men’s Christian Association branch.  But this was like no other Y.M.C.A. club in the city.  It was for “colored” boys only.  The New York Times would later recall that “It was an organization independent of the New York City YMCA, although the two cooperated.’

The club remained in the building at least until 1889.  But by now the area was undergoing change once again.  The former homes were rapidly being razed for tall factory and store buildings as the dry goods district overtook the blocks.

Husband and wife team Louisa and Samuel A. Friedline got in on the lucrative trend.  Friedline was a builder, and his wife bought and sold real estate.  In 1893, for instance, they commissioned architect George F. Pelham to design a $20,000 factory building on North Moore Street.  Three years later they would work together again, on Wooster Street.

The end of the line for the old Young Men’s Christian Association building at No. 97 Wooster was near when Edmond J. Sause purchased it for $22,000 in August 1895.  He resold it to the inexhaustible loft developer Max S. Korn, in February the following year.

It appears that Max and his brother, Isaac S. Korn, initially intended to develop the property; for when they sold it to Louisa Friedline two months later it was described as a “lot” with no building mentioned.  On April 11, 1896 the Real Estate Record & Builders’ Guide noted that the Friedlines purchased the 25-foot wide property “for immediate improvement by the erection of a seven-story warehouse.”

George F. Pelham was brought back for the project and, of course, Samuel Friedline handled the construction.   Ground was broken on May 11, 1896 and completed in November 1897.   A commercial take on Romanesque Revival, the brick, stone and cast iron building offered five upper floors of factory, or “loft,” space above two retail floors.

The two-story cast iron store front was framed in beige brick with rough-cut stone courses providing dimensional interest.  A highly-interesting entablature resembled an unrolled fluted column, below a textured cornice of regimented nubs.  The upper floors were decorated with medieval carvings; most notably at the fifth floor where carved faces upheld engaged columns.  Their capitals, carved with spiraling ferns, were connected by an ornate frieze. 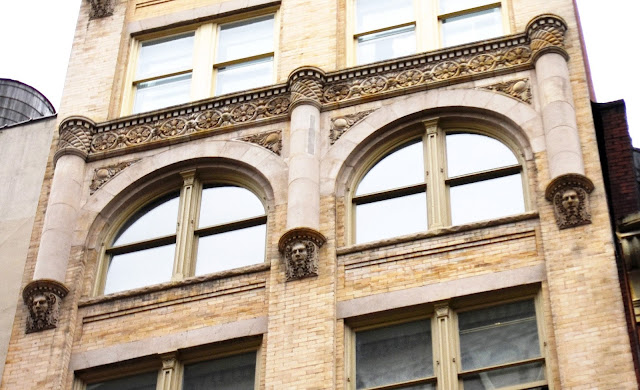 The heads and columns were reintroduced at the top floor, where they melded into the complex cast metal cornice.  Eye-catching were the twisted column extensions and the nubby cornice detail that mimicked the stone version below. 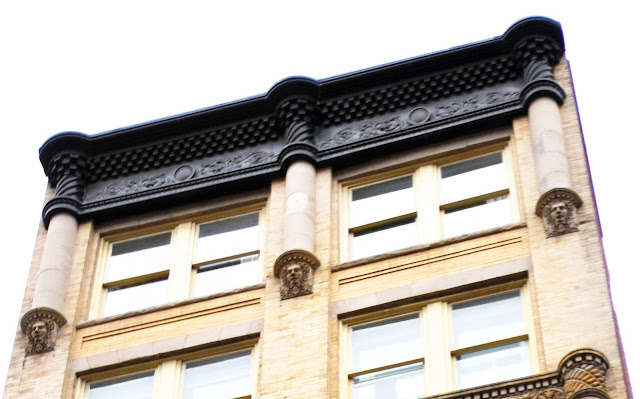 As was the case with most other loft buildings in the area, the Friedline’s new building filled with tenants in the textile or apparel trade.  Michael Abrahams, manufacturer of petticoats; and The Baker Underwear Co. were among the earliest.

Baker Underwear also had a small factory in Peekskill, New York where it manufactured muslin underwear.  A seductive advertisement in The Sun on June 27, 1901 was cleverly worded to entice young workers there.

The excited young women reading the tempting advertisement might have overlooked the fact that they were responsible for expenses, including the $3.50 per week “board in private families.”  It was briefly mentioned in “This is a splendid chance for good operators to get away from the hot city, and besides paying all expenses, have the benefit of the country.”

On the top floor in 1903 was the petticoat and women’s underwear factory of Benjamin Lustgarten.    On May 11 that year, the manufacturer would be highly grateful that next door, at No. 99 Wooster Street, was the firehouse of Engine Company No. 13.

Lustgarten and two employees, Max Weissner and Benjamin Lerner, were working late on Monday night, May 11.  There were no other workers in the building so no one noticed when fire broke out on the fifth floor.  Several firefighters were standing around in front of the firehouse and Lt. George J. Irving was looking out of the station’s top floor window when, according to the New-York Tribune the following day, “a window was blown out of the fifth floor, and smoke followed.”

Lustgarten and his employees were trapped on the seventh floor of No. 97 and, were it not for the proximity of the firefighters, most likely would have perished.  Lt. Irving rushed to the roof of the firehouse, three floors below the trapped men.  He dropped a rope to the firemen below, who tied a scaling ladder to it, which the lieutenant hoisted up.

As he climbed upwards, the other firefighters reached the roof with additional ladders.  When Irving reached the seventh floor Lustgarten was already partially overcome by smoke inhalation.  The Tribune reported “Irving handed the men down to the firemen, who took them to the roof of the firehouse and to the street.”

Commission merchant Herman Sudgen was also a tenant about this time.   Why, on June 3, 1905, he was carrying $290 in his pocket (more than $8,000 today) is unclear; but on his way home to Brooklyn that night he nearly lost it.

Pickpockets were a constant worry at the turn of the last century; and while riding on a Bushwick Avenue streetcar Sudgen felt a hand in his pocket.  The crowded car was in the middle of the Williamsburg Bridge and “in an instant the car was in an uproar,” related The New York Times.

The crook tried to get away and dropped the cash.  But the resolute Herman Sudgen refused to release his tight grip on the 26-year old.  When the car reached the Brooklyn Plaza stop, Policeman Washington Irving arrested Henry Meyer, who was still in the clutches of his would-be victim.

Neckwear manufacturer George M. Batt was called for jury duty in 1907.  He sat on the case of Frederick Schoneland who was arrested on criminal assault charges.   Batt and the other jurors infuriated Judge Rosalsky when they attempted to force his ruling.

After hearing the evidence, they told Rosalsky that if he would impose a sentence of no more than two years in prison, they would find Schoneland guilty.  Otherwise, they would find him not guilty, resulting in his release.   Refusing to be intimidated or bullied, the judge sent George Batt and his co-jurors home and called for a new trial.

Abraham Wittcover’s Swiss Embroidery and Novelty Company, once a thriving concern, was doing poorly around the time of Batt’s expulsion from the case.   Finally, as the summer of 1908 approached, he declared bankruptcy and closed the firm.

No longer able to afford his home, he moved his wife and little girl to a Williamsburg flat on Thursday, June 11.  He then disappeared.  Mrs. Wittcover, according to newspaper reports, tried to find him in Manhattan.  And, ironically, Wittcover showed up at the Williamsburg apartment on Saturday while she was searching for him and, “finding the flat locked up, went back to Manhattan.”

The desperately broken man had taken a room in a hotel on Third Avenue at 24th street.  On Sunday morning hotel employees smelled gas.  “When they broke in the door they found Wittcover dead in bed, with a tube attached to an open gas jet in his mouth,” reported The New York Times.

The tragedy continued when Mrs. Wittcover identified the body in the morgue.  After throwing herself on her husband’s body in despair, she rushed to the East River where she attempted suicide.

William Diamondstein’s firm, The Carlyle Hem-stitching and Button Company, and apparel company Weinstein & Regoff would have to start over elsewhere after a devastating fire tore through the building early in 1917.   On May 15, 1917 agents William A. White announced they had fully leased the factory spaces of No. 97, “which has been extensively altered since it was partially destroyed by fire.”

Maxine Mfg. Co. had taken the third floor, Langer & Co. the fourth, H. Bernstein & Sons the fifth, Miller Bros. Co. leased the sixth floor, and Gustav Abrahams Co. was now on the top floor.   In December Frank & Lambert Co. filled the last vacancy when it leased the store and basement.

For the next few decades the building would continue to house garment companies.  But in the 1920s there were hints that the apparel district was abandoning the neighborhood.  The Iron Pipe and Specialty Co., Inc. was in the building through the late ‘20s, for instance.  And the Security Hand Bag Co. and the Cup Craft Paper Corp. added to the non-apparel tenant list.

By mid-century the neighborhood's loft buildings were neglected and abused—and many of them stood vacant.  But the area, now known as Soho, caught the attention of artists.  In an article about loft art shows on April 19, 1968 The New York Times noted “And last month, a group of artists who work in a building at 97 Wooster Street—Sue Aitkin, Tony Balzano, Rudolph Baranik, George Gillson, Bob Pittenger and May Stevens—staged a three-weekend group show in an empty studio lent them by the landlord.”

Where women’s muslin underwear had been manufactured, artists now lived and worked.  In 1971 artist Ruth Vodicka’s had her home and studio here, for instance.  And on September 16, 1972 A. I. R. Gallery opened in the building.  A cooperative run by and for women artists, it was deemed by The Times to be “the first women’s independent gallery.”   It would remain in the space at least until 1980. 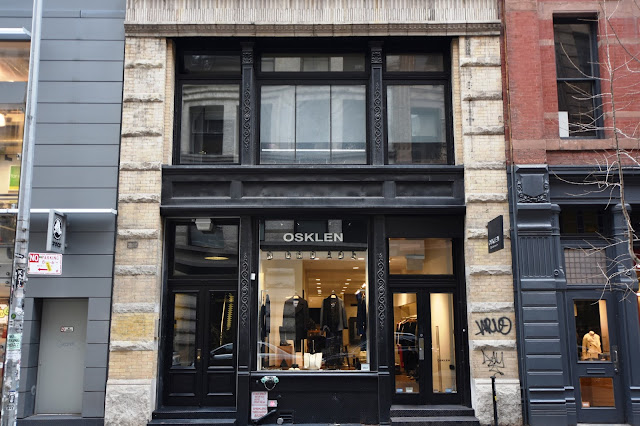 A formal conversion of No. 97 Wooster was completed in 1986, resulting in “joint living-work quarters for artists” on the upper floors and a clothing store at ground level.   Yet, despite two fires and several remodelings, even the cast iron storefront survives intact.

Although the loft spaces are still mostly open, the $8,000 per month rental fees for one apartment in 2016 suggest that the artists living here are no longer struggling.