In the early 1890s East 77th Street, between Madison and Park Avenues, was lined with narrow brownstone-fronted rowhouses.  The 18-foot wide, three story house at No. 71, built in 1877, was now home to architect Alexander Bing, partner with his brother in Bing & Bing.

But with the new century, the upscale tone of nearby Fifth Avenue spilled down the side streets and wealthy New Yorkers remodeled old townhouses into modern upscale residences.  At the same time another trend was sweeping Manhattan—cooperative artists’ studio buildings.  Throughout the city structures were being designed with artists in mind.  Vast, double-height windows offered northern light for the studios; while comfortable living spaces often sat to the rear.

In 1927 a group of investors joined the movement when they demolished the two brownstones and a carriage house at Nos. 69 through 73 East 77th Street, including the old Alexander Bing house.  They hired the architectural firm of Caughey & Evans to design a ten-story apartment building on the site.   In the 1920s an architectural rage swept the country, resulting in entire communities of quaint and romantic neo-Tudor cottages, apartment houses, and civic buildings.  The Studio Building at No. 71 East 77th Street would follow the trend. 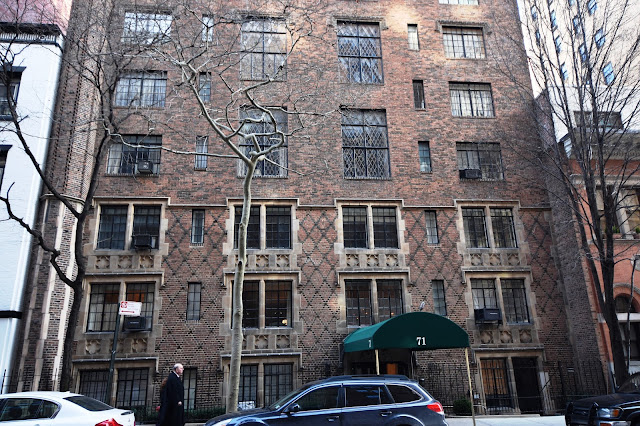 The Studio Building was successful even before the doors were opened.  On June 13, 1928 The New York Times reported that Mrs. James MacKenzie took space “in the Studio Building under construction at 71 East Seventh-seventh Street.”  And three months later Douglas L. Elliman, the leasing agent, reported that 50 percent of the building, “nearing completion,” was rented.  The firm boasted “Most of the suites have three exposures, not often found in apartments designed on an inside plot.”

The name of the new structure did not last long.  Instead of artists—who may have been put off by the southern exposure rather than the sought-after northern light—moneyed businessmen and their families moved in.  Like most of the higher-end apartment buildings on the East Side, The Studio Building quickly used only its address as its identifier.

Among the first of the residents were wealthy widow Hildreth Sisson Riddle and her daughter, Elizabeth.  Elizabeth, who had attended the private Wheeler School in Providence, was introduced to society in 1928.  Shortly thereafter, on January 5, 1929, Hildreth announced her engagement to John Ashley Merriman.

The wedding took place on June 8, 1929 at Laurimore, the summer estate of Elizabeth’s aunt and uncle.  With her daughter gone on her honeymoon, Hildreth left the city as well.   Two weeks after the ceremony, on July 25, she gave a “farewell luncheon” at the Casino in Central Park.  Society columns noted that Hildreth was sailing on the Roma to Europe.

The newlyweds made their home in Great Neck, Long Island; and it is probably no coincidence that upon her return from Europe in the spring of 1930 Hildreth “bought an English type house on Mitchell Drive in Kennilworth, Kings Point, Great Neck,” according to The Times on April 19.

In the meantime, newspapers followed the comings and goings of other residents.  In March 1929 Paul Marcy White returned from his honeymoon with his bride, the former Ann O’Gorman.  Ann was the daughter of former New York Senator James Aloysius. O’Gorman.

And on October 8, 1931 Victor and Emily House returned to their apartment here after summering in Europe.  Victor was a partner in the law firm House, Hothusen & McCloskey and the couple kept newspaper columnists busy following their widespread and frequent travels—wintering in Hollywood, Florida and summering in Vermont in 1932, for instance.  Between those trips, Emily took time to give birth to a daughter on Saturday, July 23 in the city.

When at No. 71 the Houses continued their busy social schedule.  In December that year they hosted a dinner for Mr. and Mrs. Lucien Courtois of Tours, France, for instance.

On September 17, 1933 The New York Times reported that Victor and Emily had returned to No. 71 “from a motor trip through the White Mountains of Canada.”  They would stay long enough for the birth of another daughter on June 27, the following year.

Another highly-respected couple living at No. 71 East 77th Street were retired U.S. Navy Captain George Earl Gelm and his wife, the former Marjorie Hempstead Cook.   Through her mother, Marjorie was descended from Sir Robert Hempstead, a founder of Hempstead, Long Island.  The couple was married in 1898.

George had also served as editor of The Naval Observer.  He earned the Navy Cross, the Victory Medal with citations, and the campaign medals for service in the Spanish-American War and in the Philippines.  Upon his retirement in 1928 the Gelms settled in New York.

Of a less distinguished pedigree but equally moneyed was Gloria Mead, wife of prize fight manager Eddie Mead.  Gloria held a New Year’s Eve party in 1941.  Guests in Upper East Side New Year’s parties would be expected to arrive bedecked with diamonds, furs and expensive jewelry.  Gloria’s party was no exception.  It was interrupted by three gunmen who, after terrorizing the guests, made off with $25,000 in jewelry and apparel.

Other distinguished residents included bachelor Dr. William Harris, a pioneer and specialist in radiology.  His summer home was in Poundridge, New York.  Through his travels in Europe in the 1920s, he learned the treatment of x-ray therapy for fighting cancer of the larynx and brought the process back to America.  It became his specialty.  Another esteemed physician in the building was Harvard Medical School-educated Dr. Lucius Albert.  He was attending surgeon at the Metropolitan Hospital and Consulting Surgeon at the Northern Dispensary, as well as Assistant Professor of Surgery in the New York Post Graduate Medical School.

At mid-century banker Oliver Wolcott Roosevelt and his wife, the former Verdery Akin McMichael, lived in a fourth floor apartment here.  A cousin of Theodore Roosevelt, Oliver was First Vice President of the Dry Dock Savings Institution and deemed by The New York Times as “prominent in banking and savings circles.”

The 60-year old was the victim of a bizarre accident on July 14, 1953 which nearly cost him his life.  At around 8:20 that night, according to Verdery, he was passing by a window as he walked from the bedroom to another room, and simply fell out of it.  The courtyard where he landed was below ground level, making his fell a full five stories.  The Times said ‘He struck a metal guard rail, partially demolishing it, but his glasses were not broken.”  Oliver Roosevelt did not fare as well as his glasses.  Critically injured, he was taken to Roosevelt Hospital with severe body injuries.

Throughout the rest of the century the apartment building would continue to house prominent residents.  Theatrical and literary agent Mark Hanna lived here until his death on August 15, 1958.  He had been the personal agent of Helen Hayes and throughout his career represented writers, actors and musicians such as John O’Hara, Benny Goodman, Gypsy Rose Lee, Eleanor Roosevelt, and Dorothy Kilgallen.

Among the only artists—if not the only one—to live in the building constructed with artists in mind was the highly-acclaimed Hobart Nichols.  His landscapes were acquired by many American collections, including the Metropolitan Museum of Art; and he was for a decade President of the National Academy of Design and of the Salmagundi Club from 1922 to 1924.  He died in his apartment here on August 14, 1962 at the age of 93. 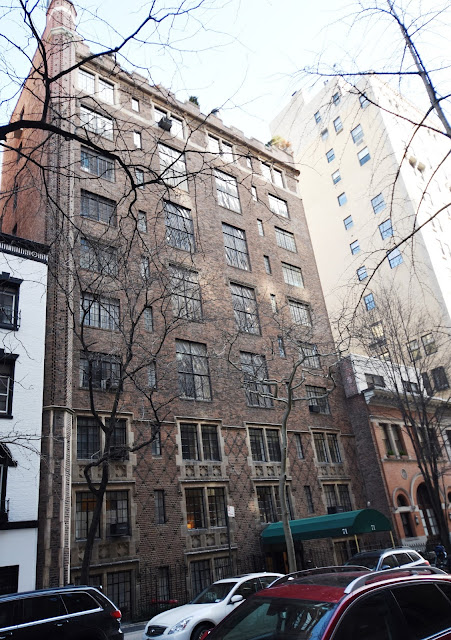 Tucked away on a block which is an architectural cornucopia of dates and styles, No. 71 East 77th Street survives unchanged.