Canal Street got its name from the eight-foot wide drainage canal (perhaps better described as a trench) that ran down its center.  Construction on the canal had begun in 1805 and was completed in 1811.  The conduit came with problems.  The slow-moving water smelled and was a breeding ground for mosquitoes.  As development encroached within just a few years it became obvious that something had to be done.  In 1819 the canal was covered over, creating an especially broad 100-foot wide roadway.

Immediately construction of brick-faced homes began, among the very first being that of John Dyer, completed prior to 1820.  At three and a half stories tall and three bays wide, it was a commodious residence.  A single dormer most likely poked through the peaked roof of the Federal-style edifice.

In 1860 Canal Street was renumbered, giving the former Dyer house the address of No. 325.  By then the encroachment of commerce had arrived and the former private homes were converted for businesses.  In 1862 No. 325 was home to J. Cook's fancy goods store at street level and his hat-making shop above.  A want ad on September 17 sought:  "Ladies' Dress Caps--Wanted experienced hands to make ladies' dress caps.  Apply to J. Cook, wholesale and retail dealer in ladies' dress caps, laces, ribbons, &c."

Within the decade Charles J. Brill was making hats in an upstairs space.  He was almost assuredly related to Samuel Brill, who ran his dry goods store next door at No. 327.   Charles was looking for a "first class milliner" in 1873.

In the meantime, the ground floor had been home to a French restaurant for several years.  But conflict between its owners took them to the breaking point in the spring of 1872.  An advertisement in The New York Herald on May 7 offered "A good French restaurant for sale--In a good street down town; a good bargain for a man who understands the business; reason for selling dissatisfaction in partnership.  Inquire of Mr. Zaebson, 325 Canal street."

Sharing the upper portion with Brill was Colmer's fur business.  It was the target of a substantial burglary on December 1, 1872.  A desperate plea was announced in newspapers three days later:

$800 reward--For restoring the whole of the Furs stolen from my stone on the night of December 1 and no questions asked; for any part of the goods returned I will give the reward in proportion to the above.

The value of the lost stock was evidenced in the sizable reward, more than $16,500 by today's standards.

It may have been the calamitous Financial Panic of 1873 that resulted in the entire upper portion of the building being vacant in 1875.  The owner advertised "Second and Third Lofts--Cheap rent to a reliable party" on September 12.  Within the year E. A. Bracket "jobber and millinery goods" was leasing space.

In 1877 the aging structure was renovated to create a modern commercial structure.  A cast iron storefront was installed and the roof raised to a full floor.  The investment proved successful and the building soon filled with garment manufacturers.

As the century drew to a close Bernheim & Co., shirtmakers, had a sizable operation.  It employed 35 men, 15 women and 7 girls under 21 years old.  The staff worked 59 hours per week, not including weekend hours.  Also in the building was Mayer & Co. which bought and sold overages, the stock of bankrupt or burned out businesses, and similar goods.

Mayer & Co. remained in the building until its own bankruptcy in October 1907.  Glick & Lodner was in the building at the time, dealers in "cloths, cassimeres, etc."  But change was on the very near horizon.

By the end of World War I No. 325 was home to Thomas J. Ivans's business.  A "building contractor, plumber, steam and gas fitter," Ivans had been in the business for decades by now.  On September 1, 1918 The Plumbers' Trade Journal thinly veiled its disdain of the union movement in reporting on Ivans's innovative hiring policies.  The article said that Ivans had formerly contacted that magazine to find skilled workers.  "That was before the day of the trade unions.  Mr. Ivans meets the shortage of competent helpers by a sort of selective draft, and he gets good results, too."

T. J. Ivans, which would remain in the building into the 1920's, was a pioneer in the changing personality of Canal Street.  By mid-century the street was filling with plastics and electronics businesses.   In 1949 Pocket Radio Craft was in No. 325, advertising in Popular Science magazine for its "3 Tube pocket radio kit."  Amateur radio buffs who sent in $9.95 would receive a do-it-yourself kit "complete [with] all parts, headphone, batteries, etc."  The ad mentioned that instructions were included, as well.

Gyro Electronics, Co., was here through the 1950's.  It, too, courted the home workbench tinkerers.   An article in Popular Science in August 1957 gave its readers step-by-step directions to make "A Speed Alarm You Can Build."  The article noted that all the parts were available at Gyro Electronics Co. on Canal Street.

Sharing the building at the time was a similar firm, Radionic Products, Co., dealers in radio parts. 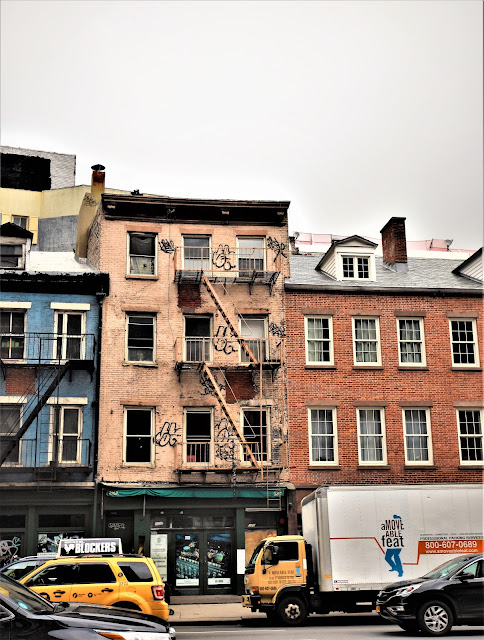 The Soho-Tribeca renaissance resulted in the resurrection and restoration of some buildings along Canal Street--like the recent make-over of the contemporary Federal-style houses next door at 321 and 323.  That good fortune has yet to visit the 200-year old disrespected and graffiti covered 325, however.