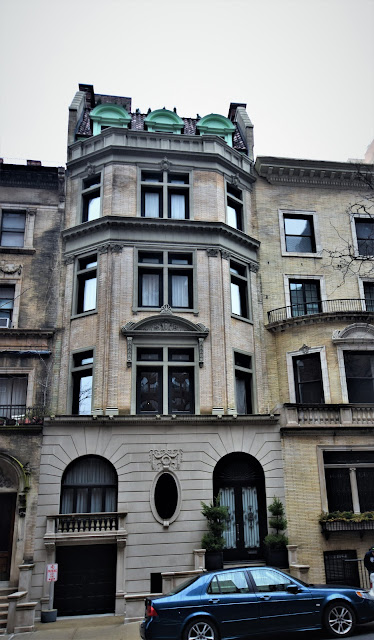 When the Orphan Asylum Society chose land off the Bloomingdale Road as the site of its new orphanage in 1836, the area was bucolic and healthful.  Rolling hills, fresh air and vistas of the Hudson River were perfect for young children.  The Society purchased what would become the two blocks from 73rd to 75th Streets, from Riverside Drive to West End Avenue.  Opened in 1840, the New York Orphan Asylum sat on the southern portion of the site.

But in 1893 the Riverside Drive neighborhood was anything but bucolic.  Rapid-fire development engulfed the orphanage as the Upper West Side became a new and fashionable suburb.  That year the Orphan Asylum Society sold off the valuable northern block.  (In 1901 Charles M. Schwab would purchase the remaining property for his block-engulfing French Renaissance style palace.)

While elsewhere entire block fronts of Upper West Side property were being snatched up and developed by speculators, a group of millionaires came up with an interesting premise when the West 74th Street block became available.   According to the Real Estate Record & Builders' Guide, side-by-side plots were purchased "by a syndicate of eight gentlemen who will build homes for themselves."

The men worked together to ensure their homes would compose an exclusive enclave with mutually-sustained property values.  Each hired the mansion architect C. P. H. Gilbert to design his home.  The result was a harmonious row of 25-foot wide residences--with the possible exception of No. 313.

The Jarvis Bonesteel Edson house stood out.  A marriage of Renaissance Revival and French Second Empire, its mansard attic made it one story taller than its neighbors.  And the only house on the row with a full-height projecting bay, it drew the eye and, perhaps, appeared just a bit more imperious.

Born in Janesville, Wisconsin on April 30, 1845, Edson had married Eliza Ward Robins on February 9, 1875.  The couple had four children--Janet DeKay, Herman Aldrich, Ethel Ward and Marmont.  Only three were alive at the time of the home's completion in 1894.  Ethel had died at the age of 2 in March 1886.

Edson had a colorful background.  He had served in the Union Army, seeing action in Gettysburg.  The following year in November he entered the U.S. Navy as third assistant engineer and served in the North Atlantic Blockade off Wilmington, Charleston, and along the coast.

In 1874 he joined with Thomas Alva Edison and J. T. Murray to organize the Domestic Telegraph Co.  After selling his interest later, he focused on manufacturing celluloid and designing and perfecting machinery for that produce.  An inventor as well as a mechanical engineer, he patented Edson's Pressure Recording Gauge, various methods of drying gun cotton by using compressed air, the manufacture of artificial ivory and more than 20 other devices.

Just after moving into the 74th Street house, in 1895, Edson retired.  He turned his attention to researching his family (in 1903 he published Edsons in England and America) and to his other passion, the navy.

His naval experience and zeal for sailing never left him.  He was a member of the New York Yacht and the Columbia Yacht Clubs; and in 1890 he was among the small group of men who formed The Naval Order of the United States.  Its History and Constitution said in 1897 "The membership was restricted to officers and enlisted men of the Naval, Marine and Revenue-Marine services, and to their descendants, and was limited in number.  This organization is believed to be the first hereditary society in which eligibility was dependent on purely naval services."

The Edson household became smaller on June 1, 1897 when Janet married Harry Smith Kelly at All Angels' Church.   Following Herman's wedding to Jennie Finch Hutchinson on September 14, 1900, only Marmont was left at home with his parents.

The Edson summer estate was at Shelter Island, Long Island.  Edson was a member of the Shelter Island Golf Club and moored his yacht, the Claymore, there.

The Edsons' names appeared in newspapers not for giving elaborate entertainments or attending balls and dinners; but most often for Jarvis's involvement with sailing or things naval.  When Admiral George Dewey spoke at a dinner given by the Naval Order of the United States at Delmonico's on March 10, 1900, for instance, both Jarvis and Herman were there.

And when the Astor Cup race was held in Newport on July 29, 1901, Edson's Claymore was among the sleek competitors.  The New-York Tribune commented on the preparations the owners made to ensure their crafts were as light as possible.  "Astor Cup races do not come every day, and the preparations made for them are complete.  Every boat that intended to race had her interior furniture removed."

In 1904 Edson purchased a new steam yacht, the Viking.  The Sun reported on August 7 "It arrived on Thursday and anchored off the Shelter Island Yacht Club."  The expense of the craft was perhaps evidenced in Edson's registering it with Lloyds' of London.  That proved to be a fortuitous move before too long.

When not at Shelter Island the Viking was moored at the West 86th Street piers.  In June 1906 it was involved in an unexpected accident--unexpected because no one was on board.  The Viking and the Colonia--the yacht owned by Frederick G. Bourne, president of the Singer Manufacturing Company--crashed into one another.  The New-York Tribune reported "The yachts were at anchor and drifted together.  The Colonia was damaged to the extent of $1,000."

In a tragic side note, the Colonia was repaired and was sailed to the Bourne's estate in Oyster Bay, Long Island on October 14.  That evening the yacht's boiler exploded, killing three persons.

Marmont married Margaret Russell Elkin on August 16, 1907.  But it would be the last joyous occasion for the family.  A string of misfortunes within the Edson family soon struck, beginning with the death of Herman's wife, Jennie, on June 25, 1908.   The following year, on July 16, 1909, Janet died at the age of just 33.

Herman moved into the house with his mother; but tragedy continued to plague Eliza.  Herman contracted typhoid fever and died on October 31 that same year.

Eliza remained in the house, now alone with her servants, until her sudden death on February 6, 1920.  Marmont, the last surviving member of the family, wasted no time in selling.  Within two months the Record & Guide reported that No. 313 had been sold to the Mogartel Realty Co.  It added "The property will be remodeled."  The firm paid $80,000 for the house--in the neighborhood of $979,000 today.

The real estate concern hired architects B. H. and C. N. Whinston to make $10,000 in alterations to the Edson house.   The changes were completed before November 1921 when an advertisement in The New York Herald offered "2 sunny rooms and bath overlooking Charles Schwab estate, view of river; immediate possession."

Among the early tenants were advertising agent Audley Kemble Leon and his wife, the former Anita E. Donaldson.  It was Anita whose name appeared in society columns; most often for her involvements with the Daughters of the American Revolution.  And the house continued to draw affluent renters, like William Smith Ryder and his new bride, Marion Dayton Crowell, who moved in after their wedding trip in the fall of 1926.

One tenant drew less desirable press coverage than a fashionable wedding or high-end society function,   Raphael Ellender, who was an artist, went to the Central Park Casino on the night of June 24, 1930.  There the 26-year old was among 500 other high-toned patrons in evening dress, among them the Prince and Princess Obolensky (the Princess was the former Alice M. Astor), a Cuban Government official and a Brazilian attache.

According to The New York Times the following morning, "The band was playing soft music under the glowing lights and well-dressed men and women were circling the floor."  The it all came to a crashing halt.  Among the crowed that evening were Prohibition agents.  The newspaper explained "they kept an eye on all the patrons who had liquor on top of their tables or in buckets under the tables."

Suddenly one of the tuxedo-clad agents stepped up to the band stand and ordered everyone back to their tables.  "A hush fell on the room, and for a moment not a sound was heard but the clink of dishes, coming from the distant kitchen.  Then a murmur arose that grew to a wave of excited comment.  The guests, however, left the dance floor as instructed and returned to their tables."

According to one person present, the Princess Obolensky commented to an agent "I regret very much that I haven't a thing."

Among the nine people arrested that night was Raphael Ellender.   He and the others were released on $500 bail.  Two days later they were required to appear at the Federal Building, and several did not hold back in speaking to reporters.  Retired businessman Paul Reiss complained "The raid was perfectly rotten and vulgar."

The Edson house was purchased in 2000 by real estate developer and hotel owner Ronald Domb.   He commissioned the architectural firm of Kossar + Garry to return it to a single-family house.  The interior detailing had greatly survived--nine fireplaces, stained glass and wood paneling, for instance--and was restored.  Surprisingly, the old birdcage elevator was still in place.  Domb donated it to the Otis elevator Company.

The row--a surprising cooperative project of individual homes by the same architect--survives greatly intact.  And the Jarvis B. Edson house, as it did in 1894, still demands the most attention.