In the decade following the Revolution the village of Greenwich was still a quiet hamlet, surrounded by farms and country estates.    In 1799 Joshua Isaacs began construction of his substantial free-standing home at the corner of the recently opened Bedford and Commerce Streets.

Completed the following year, Isaacs's 25-foot residence was faced in clapboards.  The Dutch-style gambrel roof echoed the architecture of a generation earlier.  Other elements, like the simple Federal-style doorway, brought the home up to date.

Almost immediately Isaacs lost his property in bankruptcy; but it was rescued by his son-in-law, Harmon Hendricks in 1801.   Hendricks was called by The New York Times more than a century later, "one of the pioneers in the iron and metal business."

The Book of Jewish Lists claims "The first millionaire in America...was Harmon Hendricks, a Sephardic Jew who founded America's first copper rolling mill in the late 1700s."   Hendricks and his brother, Solomon, whose office was on South William Street, were the New York agents of Paul Revere.

A staunch patriot (newspapers refered to him as having been "in favor of the revolution"), when the Government was in drastic need of metal during the War of 1812, Hendricks teamed with Joshua Isaacs to organize a copper rolling mill in Belleville, New Jersey.  It was at the Hendricks plant that the copper boilers for Robert Fulton's steam-powered vessels were made.

Hendricks amassed a large amount of real estate, not only including the immediate neighborhood around the house which would be numbered 77 Bedford Street; but the entire block on Greenwich Avenue between Bank and 12th Street; the block of Sixth to Seventh Avenues between 21st and 22nd Streets, and downtown property.  Additionally, the family maintained a farm and summer estate in the area that is now around Broadway and 72nd Street.

When Hendricks died in 1821 he left an estate estimated, according to The Times decades later, at $3 million--more than 20 times that much in today's dollars.  The properties were divided among the six children--Edmund, Harmon W., Joshua, Hettie, Emma and Henry.  Among the properties left in trust to daughter Hettie, who was married to Aaron L. Gomez, was the Bedford Street house.

Hettie and Aaron, who lived at No. 82 Amity Street (later renamed West Third Street) had six children.  Aaron managed the Hendricks properties and by the early 1830's was leasing No. 77 to the Roome family.  John P. Roome was listed as a deputy sheriff in 1834 directories, and William Roome as an "agent"--most likely a dry goods or other commission agent.  A relative who made his living as a carpenter, Thomas Roome, lived directly across the street.

The Roome family were here at least through 1835.  City maps that year indicate that the Hendricks-Gomez estate had yet to build on the surrounding property, leaving the house still free standing.   It was around the time the Roomes left--about 1836--that Gomez updated the residence with a brick front.

No. 77 next became home to the Haff family.  John Peter Haff, Jr. was a well-respected attorney.  He and his wife, the former Ann Eliza Stillwell, had seven children.   So solid was his reputation that Dr. J. Wheeler, "occulist," placed an advertisement for the "superior efficacy of Dr. Wheeler's Treatment of diseased eyes over all others" in November 1839, he listed among his references "John P. Haff, Esq. 77 Bedford st."

Haff's father, who died in 1838, was an inspector of leather, an agricultural expert, and a builder.  He was responsible for handsome structures like No. 203 Prince Street.   It is unclear how long the Haffs remained on Bedford Street, but by 1852 John P. Haff, Jr. opened the Elm Park Hotel on the Bloomingdale Road.

No. 77 had been the scene of a disturbing incident on October 11, 1847.  On the opposite corner was the butcher shop of man named Knauer.  As he arrived at his store "at a very early hour," according to The New York Herald, he heard a baby's cries.  He investigated and "discovered a beautiful new-born female infant, apparently not six hours old, with little or no covering, and exposed almost naked to the cold winds of heaven."

Knauer bundled up the infant and rushed back home.  In sentimental Victorian prose, the newspaper reported that his wife, "with the feelings of a mother and those of humanity, dressed, provided and cared for it."  The Knauers found "a lady who was not blest with an offspring" who willingly took in the baby.

The occupants of No. 77 in the early 1860's were Julius and Jane Wist.  On January 20, 1863 they welcomed a new baby boy named Diedrich August.  Tragically, only four months later, on June 13, the house would be the scene of his funeral.

Equally heart-wrenching was the story of the next tenant.  John Hemmer was 37 years old and already a widow in 1865.  The single father lived here with his 9-year old daughter, Katen.  John died on July 13 and his funeral was held in the house the following day.

The orphaned Katen was taken in by her maternal grandparents, the Tufts, who lived nearby at No. 35 Morton Street.   Three months later, on October 4, the little girl died there.

Hetty Hendricks Gomez had died on January 9, that year.  The following year Aaron L. Gomez died, and their son, Dr. Horatio Gomez, took over the management of the extended properties.

By the early 1870's a family named Rice was living in the Bedford Street house.  On May 20, 1873 an advertisement appeared in The New York Herald looking for "A girl about 16 years old, to take care of a child and make herself useful in a small family."

Katharine Rice would be the victim of a terrifying incident two years later.  The 17-year old was sitting in the parlor at the open window on the morning of September 9, 1875 with two friends.  A peach vendor drove his wagon in front of the house and, seeing the girls, asked if they wanted to buy fruit.

Katharine agreed and headed to the front door.  The New-York Tribune reported "When she went into the hallway to meet him he attempted to commit an atrocious assault upon her, but her screams called her companions, whereupon the ruffian fled."  Although the attacker managed to get away, the quick-witted girls had made note of his wagon number and reported it to police.

In 1892 Horatio Gomez was 70 years old and had retired from his medical practice.  His siblings had become impatient with his kindness which, at least in their estimations, outweighed his business shrewdness.   Dr. Gomez had never rendered an accounting of the income and expenses since he took over the administration of the properties in 1866.

Now Horatio's brother, Edwin, "demands an accounting and accuses the Doctor of having wasted the property of the reversionaries by leasing some of it for long terms at ridiculously low rentals."  Edwin claimed that the rents being charged had not been raised since 1872.

On April 10 The Sun explained that the real estate inherited by their mother, "was to remain intact and the children to receive each a sixth of the income from it until all were dead."  The value the newspaper put on the lots, which were primarily on Bedford Street, Bank Street and Greenwich Avenue, would be more than $5.5 million today.

Despite the family friction, the properties necessarily remained in the Henricks-Gomez estate (as per the terms of the will) as the neighborhood changed from a sleepy residential village to Manhattan's center of art, literature and music.  By the first decades of the 20th century the quaint old wooden and brick-faced homes in the neighborhood were being razed for modern apartment houses.

In February 1910 the family sold the first of the old Hendrick properties, the entire block front of Greenwich Avenue between Bank and 12th Streets.   In reporting on the sale, The New York Times recapped the long history of the Hendricks and Gomez ownership, and mentioned the Commerce-Barrow Street neighborhood specifically.  "Most of the houses there retain the old-fashioned characteristics of half a century or more ago, and are interesting survivals of Greenwich Village's more aristocratic residential days."

In October 1923 the rest of the properties were liquidated in a single transaction.  Spalding Hall and Cyrus Brown, who had recently acquired the nearby houses at Nos. 39 and 41 Commerce Street, bought up Nos. 34 to 44 Commerce Street, and Nos. 73 through 77 Bedford Street.  The Times noted "the recently acquired property is being remodeled into studios and apartments."

Within a month a group of artists, writers and performers bought many of the houses in an effort to stave off development.  On November 18 The Times reported "Greenwich Village has a new community art center.  It is in Bedford and Commerce Streets, where the noise of motor traffic on Seventh Avenue never penetrates."  The article noted that among the "syndicate" were Pulitzer Prize winning poet Edna St. Vincent Millay who had taken the narrow house at 73½ Barrow and silent film actress Evelyn Vaughn "who has left the Pacific Coast for New York" and had purchased No. 77.

The Times described No. 77 as "an old timer, dating back to the early part of the last century.  The article noted "This large corner house with its many quaint reminders of simpler New York days is being remodeled, and one of the most important additions will be at least one, and perhaps more baths, for Miss Evelyn Vaughn."  Additionally, the actress's architect, Brooklyn-based Ferdinand Savigano, raised the attic roof to create studio space. 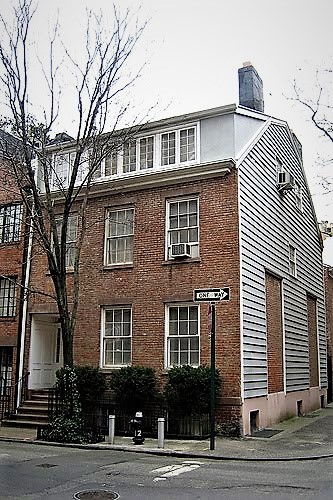 Bedford Street was widened in 1930, requiring the removal of the old porch with its antique ironwork.  The doorway, while preserved, was closed off and the entrance created by Savigano in the rear courtyard became the main access.

The end of the line for No. 77 as a single family home seemed to come in 1938 when it was converted to one apartment in the cellar and two each on the upper floors.  Subsequent decades were unkind to the aging wooden structure.  Decay and neglect threatened the historic house by the last quarter of the century.


But the charm of Greenwich Village's winding streets and vintage architecture drew moneyed families.  One by one Federal rowhouses were purchased and restored.  The Isaacs-Hendricks house got its turn in 1989 when it was reconverted to a single-family residence by Jacqueline Thion de la Chaume, French socialite and third wife of actor Yul Brynner.  Among the renovations was the reopening of the Bedford Street entrance.


It was placed on the market in 2013 for a substantial $6.9 million.  The oldest extant residence in the West Village, the future of the remarkable survivor seems secure.