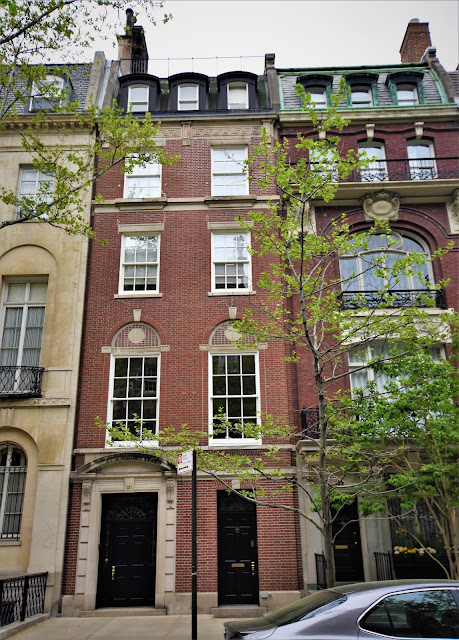 In 1862 Sarah Mitchell began construction on a row of five homes at Nos. 121 through 129 East 70th Street.  Completed the following year, they were especially charming High Victorian Gothic houses.  But in 1910 the charm had faded and the increasingly upscale block saw vintage structures one-by-one remodeled or replaced by modern Edwardian homes.

Howard Gardiner Cushing was a well-established society portrait painter.  A 1891 graduate of Harvard College, he studied at the Academie Julien in Paris before establishing his New York City studio in 1898.  On November 7, 1904 he married Ethel Cochrane, a Boston debutante.   By the time Cushing purchased No. 121 East 70th Street from Winthrop L and Mary K. Rogers on April 1, 1910, he and Ethel had three children, Olivia, Howard, Jr., and Lily Dulany.

Even while the transaction for the property was taking place, the Cushings were forging ahead with their plans.  The day after title was transferred the well-known architectural firm of Delano & Aldrich filed plans to replace the Victorian house with a a "five-story brick and stone dwelling."  The up-to-date residence would cost the Cushings the equivalent of $532,000 today.

Completed within the year, it was designed in the highly popular neo-Federal style (although the New-York Tribune preferred to call it "in the Colonial style").   Its entrance featured a rusticated frame and arched pediment.  The understated service door to the side tried not to attract attention.


The second floor windows were crowned by tympana formed of header bricks and paneled keystones.  Delano & Aldrich cleverly overlapped the sills of the third floor windows onto the stone bandcourse, creating additional dimension and interest.  Below the cornice a stone frieze was carved with a complex Greek key design.

Cushing's style of portraiture was influenced by the Art Nouveau and Orientalist movements.  His close friendship with James McNeill Whistler sometimes resulted in striking similarities in their works.  The flame-haired Ethel was her husband's favorite model.  He produced portrait after portrait of the lithe socialite.  Ethel often appeared in portraits garbed in Japanese kimonos or other Asian influenced garments, her skin always albaster-white and her hair fiery red.


The Cushing family spent much of their time at their 35-acre Newport estate, The Ledges, built by Cushing's father, Robert M. Cushing, and in Europe.  Their long absences from New York City often resulted in their leasing of the 70th Street house.

The Cushings' tenants in the winter season of 1912-13 were David and Gwendolyn Dows.  On the evening of December 12, 1912 the christening of little Evelyn Byrd Dows was held in the house.  The infant had been named for her maternal grandmother, the wife of millionaire I. Townsend Burden.

Three months later David Dows appeared in newspapers for a far less reputable incident.  It all started when Dows attended the Barnum & Bailey's Circus at Madison Square Garden in March 1913.  A trick mule was brought out and volunteers from the audience were challenged to try to ride it.  Dows, wearing "evening clothes and a high hat" was a good sport and stepped into the ring.

After a few tries, Dows managed to mount the cantankerous mule.  The New York Times said "Then suddenly the animal gathered itself and bucked with a convulsive shudder, depositing the rider neatly on the tanbark.  The latter picked himself up, brushed off his clothes, and retired to his box, to the applause and laughter of the crowd."

It should have ended there.  But Alva Johnston, a reporter for The Times, decided to follow up on the story.  He called the house very late on the night of March 23.  An irritated Dows said he refused to be interviewed on the phone and if Johnston wanted a story, he would have to come to the house.  Dows, no doubt, did not mean to come immediately.

Just after midnight Johnston rang the bell at No. 121 East 70th Street.  After a while a man in pajamas poked his head from the third floor window and asked who was there.   After a few minutes the door opened.  Johnston was invited in to the dark house.  As he was ushered into a room off the hallway, another man threw a blanket over his head and the reporter was lifted off his feet.

Unable to struggle free, the Johnston was carried to the back door and deposited in the yard.  The door was barred from within.   He shouted and banged on the door, and then tried several means of escape, finally clambering over the tall wooden fences from one yard to the next, hollering for help all the while.

Johnston was finally rescued by two patrolmen who quite understandably, assumed he was a burglar.  He was taken back to No. 121 where Dow insisted he be arrested.  After leaving the house, Johnston recounted how he came to be prisoner in the backyard.  "I thought it was something of that kind," said the policeman.  "Forget it."

Johnston did not forget it.  The story appeared in detail in The Times the following day.   When Dows was called by police to explain himself, he said he had been "pestered by reporters" since the mule incident.  Police Captain Henry marveled that Johnston had not been killed.  "He is very lucky to have escaped death, for it was after midnight, and dark, and there was burglary in the air."

David Dow was arrested and summoned to appear in court on charges of assault.  His attorney downplayed the situation, saying "The charge is purely a technical one, which at its worst is based only on a practical joke, having no serious consequences."

Dow was convicted of assault in the third degree, but his sentence was suspended.  Alva Johnston was not about to let him get away scot free.  In June he filed a civil law suit for $25,000 damages for "false imprisonment, aggravated assault and battery."

The Cushings were back in the 70th Street house later that year.  Their fourth child, Alexander Cochrane "Alex" Cushing born on November 18, 1913.

A popular method of fund raising among society was the presentation of tableaux.   Dressed in period costumes, wealthy participants would recreate familiar paintings.  On the night of April 25, 1916 Mrs. William K. Vanderbilt hosted a benefit for Venetian victims of World War I.   Guests seated in her ballroom that night paid $25 to see "twelve paintings of the Venetian school posed with skill," according to The Times.

Howard had been ill for several days, and although he felt well enough to work in his studio that afternoon, he stayed home.  Ethel went on to the Vanderbilt mansion, where she posed in Al Fresco at the Villa Marana.  The Times said she was "brilliantly costumed...showing her red-gold hair."

When Ethel returned home, she did not disturb her husband, but went directly to bed.  The following morning she found him dead in his bed.  He was just 47 years old.  The artist's entire estate was inherited by his wife.

Ethel continued to spend much time at The Ledges and in Europe; still leasing her furnished house during prolonged absences.  On January 10, 1923, for instance, The Times noted that "Mrs. Lewis S. Morris of Tuxedo Park has taken Mrs. Howard G. Cushing's place at 121 East Seventieth street for the remainder of the season."

On June 4, 1925 Ethel quietly married James Denison Sawyer in the home of friends in Boston.  The groom was a partner in the New York Stock Exchange firm of Eastman, Dillon & Co.  The following year Ethel turned her attentions to the debut of Lily.  On December 24, 1926 The New York Times remarked on the dinner and dancing in the ballroom of the Park Lane, saying "The guests, more than three hundred in number, were seated at separate tables and danced during the progress of the dinner."  Those guests had names like Vanderbilt, Burden, Bliss and Whitney.

Leasing the 70th Street house at the time was Marie Manice Edgar, widow of Newbold LeRoy Edgar.  In July that year she had been decorated by the President of France while in her Paris apartment on the Rue de Lubeck.  The Cross of the Legion of Honor recognized her as "a patron of French artists and libraries" and for paying for the restoration of the organ of St. Saveur.

The first hint that Marie would not be staying much longer at No. 121 came that sane year when she purchased a house in Paris.  Then, on December 8 The Times reported that she "will be married next week in Paris to Count Marcati of Greece."  The article noted "Her home is at 121 East Seventieth Street.  She also has a place at Tuxedo Park, to which she and the Count will go upon their arrival in this country."

Ethel and her family were back in the 70th Street house in 1929 when Howard's engagement to Mary Callender Ames was announced in January, followed by Lily's engagement to George Crawford Clark, Jr. on April 9.

Two weeks after Lily's announcement, newspapers reported that Howard's engagement "has been broken by mutual agreement."  Another mutual agreement came to pass the following January when Howard and Mary had patched things up and obtained their marriage licence at the Municipal Building.

Lily's marriage did not last long.  Following her divorce in March 1932, she took temporarily back her maiden name.   Her wedding to William T. Emmet took place in the 70th Street house on May 1.  It was an understated affair with only family members present and a mention in society columns that "There will be no reception."

As had been the case from the beginning, the house was repeatedly leased as the Sawyers traveled.  The winter season of 1933 saw Robert L. Fowler, Jr. living here; and in November 1936 Ethel leased the house to stock broker Dewess W. Dilworth.  He and his wife were still here the following year when The Times noted on November 24 "Mrs. John A. Logan, after passing several months at the Savoy-Plaza, has joined her daughter, Mrs. Dewess W. Dilworth, at 121 East Seventhieth street for the Winter."

In September 1943 James Denison Sawyer died at the age of 68.  Within the decade the 70th Street house became home to the James Lehrer family.

Ruth Lehrer's daughter, Louise, was from her former marriage to Herman N. Liberman, Jr.  She enjoyed a life of privilege, attending the exclusive Spence School before going on to Briarcliff College.  Her debutante season of 1959 started off with a cocktail party and buffet dinner on Christmas Day in the St. Regis roof.

In announcing her coming out, The Times outlined her busy schedule.  "The debutante attended the Debutante Ball of the New York Junior League on Nov. 25 and the Grosvenor Ball three days later.  She will attend the Mistletoe Ball, the International Debutante Ball and the Mayfair Assembly during the Christmas holidays."

After leaving school Louise landed a job as editorial assistant with Vogue magazine.  On November 10, 1961 she was married to tennis champion Richard Savitt in the 70th Street house.

Almost immediately after Louise's marriage, the Lehrer's left No. 121.  It became home to antiques dealers Neil and June Sellin, who founded Wellington Antiques here.   The fine art gallery catered to clients like John Paul Getty, Jacob Rothchild and Henry Block, according to its website. 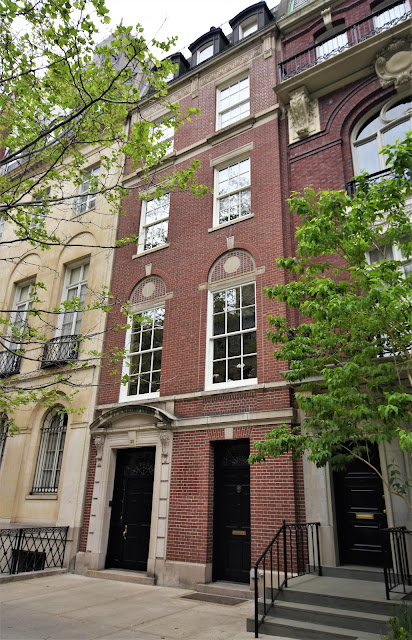 The Cushing house remains a single-family home today, its patrician facade essentially unchanged since the artist and his family moved in in 1910.