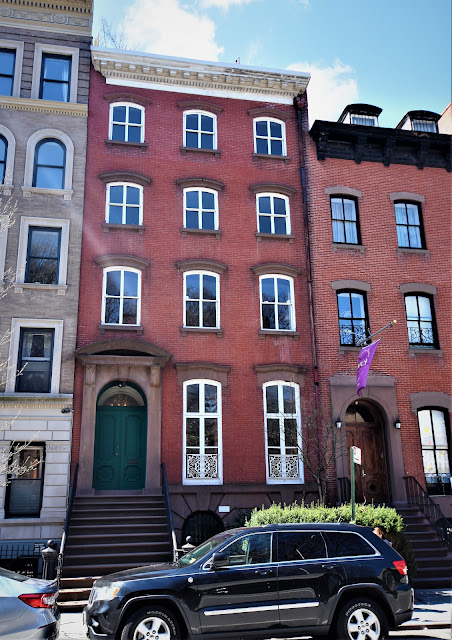 In 1857 the arcane F. X. Mony completed construction of a commodious brick-faced home at No. 312 West 20th Street.  At four stories tall and three bays wide above an English basement, the Italianate style residence followed the upscale tone of the other homes along the block facing the General Theological Seminary.

It does not seem that Mony ever lived in the house.  Months after construction was completed, on March 2, 1858, James M. Ryder was married to Mary Louisa Spaight.  The couple made No. 312 their home.  They welcomed a son, Edgar Mortimore, in February the following year.

Tragically, little Edgar died in the house on August 27, 1860 at only a year and a half old.  His funeral was held in the parlor the following afternoon.

The Ryders soon left 20th Street.  Only six months after Edgar's funeral, the house would be the scene of another..  The new occupant of No. 312 was 39-year old Arthur W. Jones.  Originally from London, he died on February 15, 1861 and his funeral was held two days later.

Jonas competed for the Riggs Prize which required participants to delivered self-written essays.  But it seems the audience did not hear much of his speech.   The Herald journalist complained "The Riggs prize essays were read by their authors, and may have been very excellent essays indeed; but as the female portion of the audience showed their good breeding by talking and laughing as though they were enjoying at interlude of some theatre while the themes were being read but few persons were able to hear a word the young gentlemen uttered."

Jonas graduated in 1870 and got found employment with The World as a journalist.  Charlotte went into education, teaching in the Primary Department of Grammar School No. 56 on West 18th Street.  Both remained in the 20th Street house with their parents.

The Whitleys had a small country home in Westchester County.  Following the summer season of 1872 the five-room house and garden was offered for rent at $10 a month.   Jonas and Charlotte do not seem to have joined their parents at the summer home anymore; perhaps because of its relatively small size.  The help-wanted advertisement on May 5, 1874 mentioned only two family members.  "Wanted--A German girl to do general housework for an American family of two a short distance in the country.  Apply to J. Whitley, 428 West 20th St."

The elder Whitley apparently handled much or all of his legal business from the house.  He placed a tantalizingly mysterious advertisement in The New York Herald on December 30, 1878.  It read:

If Emma Rhodes (Daughter of the late Obed Rhodes, wireworker, of Wakefield, Yorkshire, England), who was last heard of at 150 Nassau st., New York, will apply to the undersigned she will hear of something to her advantage, and ₤5 will be paid to anyone who shall give satisfactory evidence of her death.

Sometime around 1879 title to the property was transferred to Charlotte.  It is unclear where her parents went, or if they simply were deceased by now.  She began taking in roomers that fall.  An ad on October 14 described "First Class Private house; all conveniences; unexceptionable location; six rooms."   Jonas was still living here at the time, but his name does not appear at the address after 1879.

Charlotte's tenant in 1885 was Catharine Waldron, who was dealing with significant domestic problems.  It seems that Catherine's husband, Josiah V. Waldron, had originally moved in to the house with her; but he left in January that year never to return.  He left her with $7 to live on, about $185 in today's dollars.

Struggling to pay the rent or feed herself, Catharine pleaded her case in the Jefferson Market Court on August 8, charging Josiah with abandonment.  Josiah gave a remarkable defense.

On September 13 The Sun reported "Waldron, who is over 50 yeas old, is a clerk in the hardware business with his brother, C. F. Waldron, at 54 Cliff street.  He denied that he had abandoned his wife.  He was willing to support his wife, he said, but he could not afford to give her much money, as his salary was only $18 a week, and out of that he had to pay board for his children by former wives."

Justice O'Reilly was little moved by the man's pitiful story.  The newspaper reported he "required him to furnish $500 bail to insure his giving his wife $6 a week."

Before long Charlotte moved to Madison Street and in 1891 leased the house to The Society for the Home Study of Holy Scripture and Church History.  Affiliated with the Episcopal Church, the house became St. Anna's Hall for female religious students.  Part residence, part research center, it held an expansive lending library.  On April 8, 1893 The Churchman reported "Books are loaned throughout the land, and the work is attended to by women whose special training and experience enables them to answer the demands of such labor.  Five hundred volumes were sent out last year."

Sarah F. Smiley, the secretary and a director, lived permanently in the house.  Other trustees or graduates of the Society lived there on a volunteer basis for up to a month at a time, to assist.  Other rooms were leased to religious students.  The Churchman explained "Those who choose to come to St. Anna's for study are expected to pay the cost of rooms and board.  All else is without charge."

The reading room was opened on Saturday afternoons for Sunday School teachers, and in the evenings for working women.  During Advent and Lent free lectures and scriptural instructions were offered to any women who cared to attend.

The Churchman deemed the neighborhood "remarkably desirable," saying "It is in quaint old Chelsea Square, opposite the chapel of the Good Shepard, which stands within the grounds of the General Theological Seminary.  Thus the residents are privileged to enjoy the frequent church services; and the sympathy, counsel, and aid of the dean and the professors are of inestimable value to the society."

Sarah Smiley and her team continued to add to the library.  On July 7, 1894 The Living Church reported "The library has reached the number of about two thousand books, many of the rarest obtained through Miss Smiley's personal effort and research abroad, and in New York and other cities.   It is a most attractive place for those who revel in such literature."

Sarah Smiley was no longer living at No. 428 at the time.  In her place was Susan B. Nelson, the new secretary and treasurer.  A year before The Living Church article she had been infuriated by much less flatter press surrounding St. Anna's Hall.

Letitia Townsend was general secretary of the Girls' Friendly Society and an active worker in the Society for the Home Study of the Scriptures and Church History.  Like other volunteers, she moved in to St. Anna's Hall for a few weeks in the spring of 1893.   On Easter Sunday she visited her mother at Glen Cove, Long Island.  Within a week or two she became ill.

It quickly became evident that she had contracted typhus fever, a deadly disease associated with crowded, unsanitary conditions and passed on by fleas and lice.  Letitia was removed to Riverside Hospital on North Brother Island where for days there seemed little hope that she would survive.  Newspapers spread the rumor that she had been infected in St. Anna's Hall.

On April 20, 1893 The New York Times reported "Mrs. Nelson has been greatly annoyed by the statements published to the effect that the disease was contracted in her house.  She does not rent rooms, or permit any persons to visit the library of St. Anna's Hall except those who are well recommended.  There was, therefore, she said, no ground whatever to suspect that Miss Townsend caught the disease in her house."

Before the turn of the century St. Anna's Hall was gone and Charlotte H. Whitley had moved back.  She was still teaching, and in June 1896 the Board of Education ("after fourteen years' meritorious service") gave her a raise.  She now earned $584 per year, or about $17,600 today.  Charlotte continued to augment her income by leasing rooms in her home for years.

Charles Mordaunt lived at No. 428 in 1921.  He ran a restaurant two blocks away at No. 124 Ninth Avenue.  On May 8 that year he sold a glass of whiskey to James Murphy.  Unfortunately for Mordaunt, Murphy was a Prohibition agent.   The $1 sale resulted in his being indicted by a grand jury and held on $500 bond.

Five years later, on December 21, 1926, Mordaunt (who seems to have moved from West 20th Street by now) reveled in the inability of Prohibition to stifle drinking in a Letter to the Editor of The New York Times:

The saloon has come back.  Let any man take a trip from Park Row...and he can find one every two or three blocks.  They are modest places, sometimes with the sign "restaurant" or "home lunch" or "clam house," but oftener with no sign at all.  but they are doing a land office business, although everything has to be very quiet to all appearances.

In 1922 resident Key Pendleton Smith committed a horrible crime.  Part Native American, he had married a Hungarian-born woman named Rose.  She found a job as a maid in the Brooklyn home of leather merchant Alexander Katz.  In April that year she left her husband and told her employers she had discovered he had two other wives.

Smith tried unsuccessfully to convince Rose to come back to him.  On the night of May 4 Smith traveled to the Bay Parkway house and knocked on the kitchen door.  Rose let him in and, once again, refused to return to him.

The New York Times reported the horrifying event that followed.  "Mr. Katz, who was reading in the library, suddenly heard a shriek and saw the women run from the kitchen to the breakfast room."  Close behind was Smith brandishing a large kitchen knife.  When Rose tripped and fell, Smith turned her over and slashed her throat.  The Times said "then he kissed her and exclaimed: 'Good-bye and God bless you!'  He ran out of the house and disappeared."

Smith did not return to No. 428 West 20th Street after the murder.  He was captured in City Hall Park on May 11.   Without an exception newspapers made a point of Smith's race.  The New York Times reported "Key Pendleton Smith, an American Indian, who stabbed his white wife to death...was arrested yesterday."  And on November 22 The Evening World wrote "Key Pendleton Smith, No. 428 West 20th Street, a half-breed Indian, who admits having had four wives until last May, was placed on trial for murder to-day."

In fact, Smith admitted to having two other wives, not three as The Evening World reported, but he insisted Rose "was the only one he loved."  On the night of his arrest he told detectives he expected to go to the electric chair.  He was right.   On June 22, 1923 he was executed in Sing Sing Prison.

In 1965 No. 428 was converted to apartments, one per floor.  A subsequent renovation resulted in a total of seven apartments, but they were nonetheless upscale.  In 2009 one apartment sold for $1.2 million; only to be purchased five years later by actor Tate Donovan for $1.8 million.