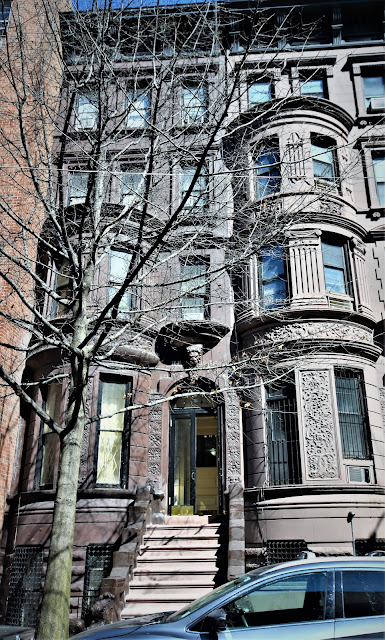 In April 1889 developer George Crawford purchased the “full-sized lot” on the north side of 71st Street, between Central Park West and Columbus Avenue, from Samuel Uhlfeder.  He paid Ulhfeder, who lived in Frankfort, Germany, $15,400 for the large lot.  Three months later the Real Estate Record & Builders’ Guide reported that architect Martin V. B. Ferdon had completed the plans.

Crawford toyed with the dimensions of the four houses which would fill the vacant plots at Nos 33 through 39 West 71st Street.  The Guide noted that two of the homes would be 18-feet wide, one 19, and another 20.  Each four stories tall above an English basement, they would have “bay windows and be trimmed throughout with hardwood.  They will be fitted with centre stairways and open fireplaces. All the latest improvements will be introduced.”

The brownstone fronted residences were completed in 1890.  The disparate widths were essentially unnoticeable.  Ferdon had designed four unexceptional neo-Grec homes to which he then added rather startling neo-Renaissance elements in an A-B-A-B pattern.  The rounded bays and entrances were embellished with elaborate carvings.  Highly unusual were the pierced, stepped wing walls that took the place of stoop railings.

In 1895 No. 39 was purchased by Joseph F. Cullman.  A partner in Cullman Bros., tobacco dealers and brokers, he had started his career as a teenager in 1869 with Egbert Dills & Co, tobacco merchants on Water Street.  By now he had amassed a comfortable fortune.

Joseph and Zilah Cullman’s son, Joseph Jr., was 13-years old when the family moved onto West 71st Street.  He attended the preparatory Sach’s School before going onto Yale.  Upon his graduation in 1904 he entered his father’s tobacco firm.   1906 would perhaps be the most momentous year in the younger Cullman’s life.  Not only was he made a partner in Cullman Bros. that year; but he married Frances N. Wolff, the daughter of wealthy broker Julius R. Wolff, on Wednesday March 28.

As a wedding present Joseph and Zilah gave the couple a house at No. 46 West 69th Street.  Their son, also named Joseph, would eventually become CEO of Philip Morris Company.

In the meantime, Joseph and Zilah lived on in the West 71st Street house and their summer home, Cedar Lodge, in Far Rockaway.  On April 22, 1921 The American Hebrew and Jewish Messenger updated its readers with the Cullmans’ movements, reporting that they “will be abroad during the early Summer months.  Upon their return, they will go to their Far Rockaway home for the remainder of the season.”

Joseph Cullman died in 1938.  It was the end of the line for No. 39 as a single-family home.  The following year a conversion was completed that resulted in two furnished apartments per floor.  The house where Joseph and Zilah Cullman had spent more than 40 years together was now home to ten families.

Among the more colorful tenants in the old brownstone throughout the next decades was Jack Bradley.  He wrote thrilling stories for publications like Detective Tales, Crack Detective Stories and Speed Detective Stories.

Harriet Green was a resident in the 1960s and ‘70s.  She was well ahead of her time when she founded Bike for a Better City.  Convinced that biking was a means to improve quality of urban life, she lobbied for more plainclothes officers to counter bicycle thefts and assaults on riders. 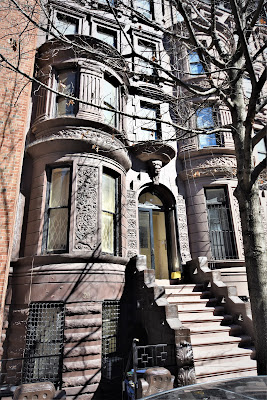 The Cullman house lost its entrance doors as it and the rest of the row were altered to multifamily buildings.  Next door, No. 37 lost its stoop and at the far end, No. 33 received an ill-advised coat of butter-colored paint.   Despite the changes; the integrity of the row survives.  The quirky combination of neo-Renaissance elements pasted onto the staid neo-Grec designs is both somewhat surprising and delightful.