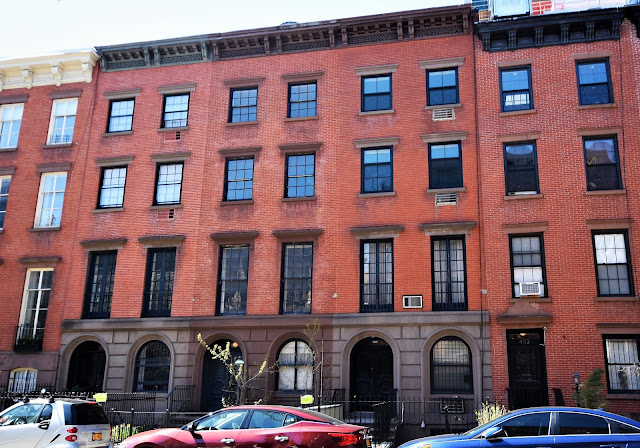 In the 1840's Caleb O. Terrill was listed in city directories as "mason;" but by the early 1850's he had changed his title to "builder."   In 1854 he embarked on an ambitious project of erecting three high-end homes at Nos. 330 through 334 West 20th Street, facing the tranquil grounds of the General Theological Seminary.

The block, between Ninth and Tenth Avenue, was becoming lined with elegant rowhouses.  Terrill's three 16-foot wide dwellings were designed in the Anglo-Italianate style, foregoing the common high stoop in favor of low porches a few steps above the sidewalk.  The rusticated brownstone first floors included round-arched openings.  The three stories of red brick above were trimmed in brownstone.  The common pressed metal cornice included an unusual frieze of bosses protruding through diamond-shaped openings, creating a honeycomb effect.

Jonas W. Terrill, acting as administrator of Caleb's estate, oversaw an auction of Nos. 332 and 334 on March 22, 1856.  The announcement described them as "two elegant English basement houses...with handsome brown stone basements, superbly built and beautifully finished, with all the improvements of furnace, gas, water closets, baths, &c."  The Terrill estate maintained ownership of No. 330.

The family at No. 450 was looking for a new cook in December 1868.  The family had at least one toddler, who would tragically perish in the house seven months later.  On July 12, 1869 The New York Herald reported "A boy four years old, residing at 450 West Twentieth street, died yesterday evening from burns received while playing with lucifer matches."  ("Lucifer" matches were notoriously dangerous, sometimes igniting explosively and throwing hot sparks several feet.)

No. 446 appears to have been operated as a boarding house at the time.  A baffling advertisement appeared in The New York Herald on April 9, 1869 that read "If Mr. Winters, Upholsterer, will call immediately at Mrs. Dickinson's 446 West Twentieth street, he will hear of something to his advantage."

By 1872 there was a different family leasing No. 446.  They were looking for a servant girl in April that year, to work "as chambermaid and laundress; wages $13."   The following year in September when the family had a room available to rent out, they carefully worded their advertisement to avoid possible problems later.

Elegantly furnished room, with or without Board, to gentleman and wife or two single gentlemen in a private Jewish family; terms reasonable.

The family of William Berri, Sr. lived next door and began leasing rooms at the same time.  An ad in The New York Herald on April 22, 1873 offered "Front basement, large parlor, all of Third Floor; one on Fourth, 448 West Twentieth street; all improvements; fine order and locality.  $60 month."   The rent was substantial, equaling about $1,270 per month today.

The Berris' leasing of rooms apparently had more to do with unused space than financial need.  William Berri, Sr. was the head of Wm. Berri's Sons, described by the American Carpet and Upholstery Journal as "one of the oldest carpet concerns in the country."  William Berri began by manufacturing "oil-cloths" in the 1840's.   He opened his first carpet store on Fulton Avenue in Brooklyn on April 1, 1859 and brought his sons, Eugene D. and William, Jr. into the firm in 1870.

William Berri died in the house on Sunday evening, July 26, 1874.  The 60-year old's funeral was held in the parlor two days later.

On December 30 The Evening World reported "Miss Lilla C. Berri was married to Mr. Christian Schuckle, at the home of the bride's mother, Mrs. Sarah E. Berri, of 448 West Twentieth street, last evening."  The article mentioned "The floral decorations of the house were on an extensive scale."

The Berri family would retain ownership of the house until January 1891, when the sisters sold it to Philip Boyer.   That same year Emma Terrill sold No. 446 to James Carlton Cady.  Called by The New York Times an "important ice man," Cady was the head of the Glasco Ice Company.

Born in Hartland, Vermont in 1846, he and his wife, Annie, had two daughters, Sophrona and Mae, and a son, James, Jr.   He had started his career in the ice business in Chelsea at the age of 18 and over the decades watched small family-owned firms get gobbled up one-by-one by large corporations.  Cady vehemently refused to sell out, risking his family's financial stability more than once.

The family had lived in the house for nearly three decades when The Sun reported on December 5, 1919 "James Carlton Cady, head of the only independent ice manufacturing establishment in the city, who is said to have lost several fortunes in his fight against the larger companies, died in his home at 446 West Twentieth street, yesterday, at the age of 73 years."  His funeral was held in the house the following afternoon.

In the meantime perhaps the most colorful residents of the row had lived at No. 430.  In the 1870's Frank Converse was well known for his minstrel performances.  On January 12, 1873 The New York Herald had advertised an "immense attraction this week," saying the San Francisco Minstrels would was in town.  The notice mentioned the "First appearance of the wonderful Banjo artist, Mr. Frank Converse" and urged "Don't fail to see him."


Called the "Father of the Banjo," Frank Buchanan Converse was born in Elmira, New York in 1837.  He did not invent the instrument, but he perfected it.  He was married in 1861 to Harriet Maxwell, another Elmira native, and the daughter and granddaughter of Indian traders.  The New York Times later said that the two men "had been so liked by the Senecas that they had been adopted by them."

They were a happy, if unlikely couple.  Harriet wrote poetry and was a personal friend of John G. Whittier.  Much of her poetry was written under the pseudonyms of Musidora and Salome.  By the time the couple rented rooms at No. 450, she was best known for her affiliation with Native Americans.  In 1884 she had been adopted by the Senecas and in 1891 she lobbied tirelessly against the Whipple bill which proposed to force Indians off their reservations.

Because of her work she was made a chief of the Six Nations--the only time a white woman was so honored.  On September 12, 1897 The Times reported "Mrs. Converse, or Ta-le-wanoh, as she is called by the Indians, is a Seneca Indian chief of the Snipe clan, adopted by this tribe in recognition of her services to the redmen of New York State.  Her father, Thomas Maxwell of Elmira, always paid the keenest attention to Indian matters.  For many years Mrs. Converse has followed up legislation in their interest, visited with great frequency the reservations in the western part of the State, and kept a watchful eye on the Indians of New York City."

The Converse apartment was filled with Native American relics and decorations.  On August 16, 1903 The Sun reported that "The Iroquois Indians of New York State have sent to Mrs. Harriet Maxwell Converse, 450 West Twentieth street, a 'live' or real false face, as a mark of their appreciation of her devotion to them for many years."

The mask was said to contain medicinal powers and had to be returned to the reservation once each year when, according to the article, "the leader of the society will wear it at the New Year's feast that it may 'dance with its brothers.'"  Were anyone other than the leader or Harriet Converse touch it, "it is liable to poison whoever else may handle it."

Two weeks later Frank Converse died suddenly in the 20th Street house.  On September 6, 1903 The Sun reported, "His wife, Mrs. Harriet Maxwell Converse, the well-known writer and lecturer on Indian topics, is prostrated, and last night was under medical care."

Harriet never recovered from her husband's death.  On November 18 she visited "some Indian friends," according to The New York Times, and complained of not feeling well.  The newspaper said "Feeling that she had not long to live, she returned home and addressed a package to Joseph Keppler of Puck, in which she surrendered some secret medicine of the Indian order of which she was a member, it being the duty of the members to do so before death."

Shortly before midnight one of the women who lived in the house noticed Harriet's door was ajar.  She and some of the other women checked and found her unconscious.  She died shortly afterward.

On November 20 The Times wrote "All day long yesterday Indians in the city went to the house to take a last look at the little room on the top floor, in which she had a part of what was once the most complete collection of Iroquois relics in existence, and where she made it a custom to receive her Indian friends."

The Sun reported "It was well known among Mrs. Converse's friends that she wished to have the Indian burial ritual used at her funeral."  The article noted that the funeral "would be conducted according to the Indian ritual and that Corn Planter, chief of the Wolf clan of the Senecas and priest of 'Gon-oi-din,' Iroquois religion, would undoubtedly officiate."

Harriet's extensive and valuable collection of Native American artifacts were bequeathed to the American Museum of Natural History.

While Nos. 448 and 450 continued to be operated as rooming houses past mid-century, No. 446 remained a private home.  In the 1980's it was home to author and literary critic Ronald Christ.

In the meantime, the other two houses were converted to one apartment per floor--No. 448 in 1963, and No. 450 in 1968.  Perhaps the most celebrated resident of No. 450 after the Converses was composer and writer Nicolas Nabokov.  He was best known for having composed the music to Don Quixote, the full-length ballet created by George Balanchine for the New York City Ballet in 1965.  He died at the age of 75 on April 6, 1978. 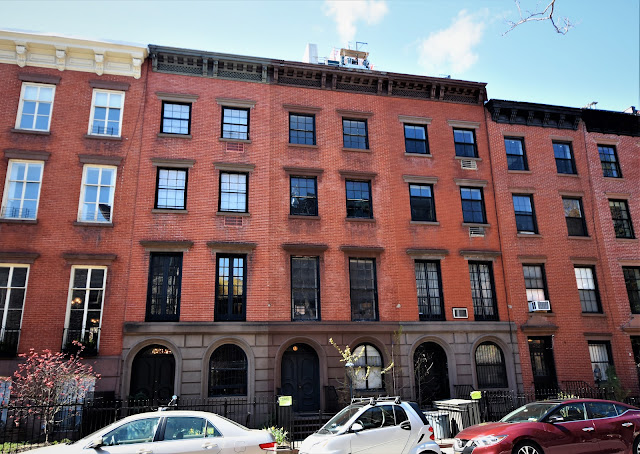