From Squalor to Charm--Grove Court in Greenwich Village 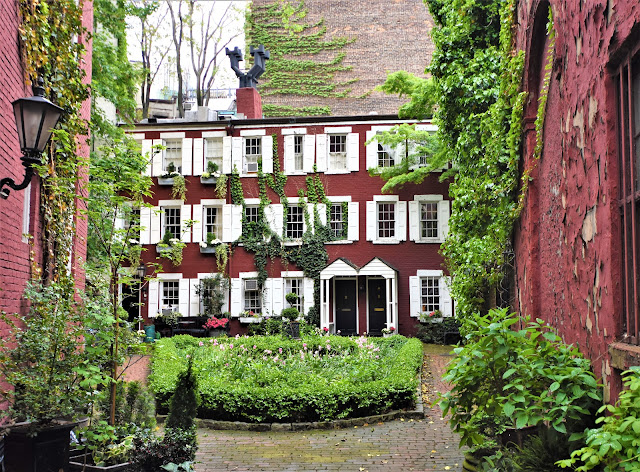 Routinely the rowhouses erected in Greenwich Village in the first decades of the 19th century included auxiliary structures in the rear yards--either small houses, shops (like carpenter or blacksmith shops), or in some cases stables.  A notable exception would take place behind the houses built by James N. Wells at Nos. 6 through 10 Grove Street between 1825 and 1834.

At the corner of Grove and Bedford Streets in 1848 was the grocery store of Cocks & Bowron.  Samuel Cocks possessed the strip of land, known as a horsewalk, next to No. 10 Grove Street which lead to the rear yards.  That year he purchased the leaseholds of those yards from Samuel Stryker (Trinity Church had owned the land since 1714 when it was granted by Queen Anne).

Cocks had six brick houses erected on the site.  Completed in 1854 they were intended for working-class families.  Considered a single lot for tax purposes, all six shared the same address of 10½ Grove Street.

Visible from the street only through the narrow passageway, the enclave quickly gained a lowly reputation.  Decades later historian W. P. Dudley wrote in the New-York Tribune that behind the houses that fronted Grove Street, "another row appeared, minus the decorative entablatures and lead-lighted doorways, and fronted by a little alley of its own in the narrow strip in the rear of the garden walls."

Dudley explained that pigs "like the cats of the present, used to roam at large...The sight of these animals careering up and down the narrow way or looking out at the gate brought the place its first name, Pig's Alley."

As the riverfront developed, according to Dudley, "the little alley [became] a settlement of oldtime longshoremen.  These were a rough and boisterous lot, and again conditions gave the place a name, this time Mixed Ale Alley."  One explanation for the term is that the tenants, without money enough to buy a mug of beer, would pour the dregs of several glasses left on the bar or on tables into one container.  It is a colorful, if questionable, story.

One of those "rough and boisterous" longshoremen living here in 1880 was John O'Hare.   He worked on the Cunard dock at Pier 40.  According to The Sun on September 19 that year, he and his coworkers had "formed a clique among themselves to control the business of the pier and keep away outsiders."  And so they were not pleased when two weeks earlier longshoreman Patrick Barrett left the White Star pier and managed to get hired on the Cunard dock.

The Sun reported "The Cunard men were very angry, and tried to frighten Barrett away by threats of violence.  They subjected him to all kinds of annoyances, and sought to pick a quarrel with him."  Things worsened on Thursday, September 16 when John O'Hare attacked him.  It initially appeared that O'Hare had picked the wrong man as Barrett was "getting the best of O'Hare," according to the newspaper.  Then one of O'Hare's cohorts, Patrick Dalton, came to his aid.  After severely beating Barrett, the pair were later arrested and fined.

The incident only inflamed sentiments against Barrett.  Fearful for his safety he went to the Charles Street police station and asked for protection.   He was told that no warrants were issued on Saturday, so he reluctantly returned to work on the pier.  On his way home that evening he was ambushed by Dalton and three other men (O'Hare was not among them this time).  Beaten badly and suffering a deep gash on his forehead, Barrett got to his feet and ran back toward the pier.

Just as the men were about to overtake him, he pulled out his revolver and fired three times, fatally hitting Dalton just over the heart and wounding two of the other men in the groin.  Barrett was arrested.  The "great crowd" of angry longshoremen who marched to the police station "was disposed to be ugly," according to The Sun.

One boy living in the row in 1909 narrowly escaped a horrifying accident on August 22.  Perhaps to escape the heat of the night, James Leddy and three other neighborhood boys, Daniel Carver, Harold Dorie and Eugene O'Keefe took a rowboat from the foot of Barrow Street out into the Hudson River.  They were all 14 years old except for Harold, who was 15.

In the darkness the little boat was struck and smashed by a ferryboat.  Hearing the commotion, Francis Carey and Thomas Cavanaugh, who were also out in a small boat, paddled to the scene.  They were able to find James and Eugene in the dark water and pull them on board .  Tragically, the other two boys were drowned.

After owning the property for more than two centuries, Trinity Church sold the Grove Street houses and those in the courtyard behind them in June 1920 to the Alentaur Realty Company.  The New York Times reported "The sale was closed through Pepe & Brother."  The developers were well known in the Greenwich Village area for remodeling run-down, antiquated houses--like those on Minetta Lane--into modern structures, often incorporating artists studios.  The first step in rehabilitation was rechristening the enclave Grove Court.

On December 5, 1920 the New-York Tribune admitted "Grove Court is on first inspection of doubtful adaptability as a beauty spot."  The article called the houses "ramshackle."   It explained "the first step in the plan, after eliminating back-yard fences and out-houses, was to cut off the cement-paved entrance court by a lattice fence, to piece out the side of the main court.  The old brick and stone pavement in front of the rear houses was readjusted to form a broad and shaded promenade running the length of the row.

A month before the article all six of the Grove Court houses had been sold.  Each sold, according to The New York Times, for about $4,500--about $61,600 today.  The newspaper called them "quaint" on December 12 and said "work will soon start in beautifying the little court into a pleasant garden with trees and flowers."

Among the first occupants was the Sidney Robbins family, who bought No. 5.  At the time of the purchase an old pump still sat in the center of the courtyard, its water presumably drawn from the old Minetta spring.   Years later the Robbins proudly displayed a relic exhumed in the basement when workmen were digging space for a heater.  A shovel clanged onto a metal object which turned out to be a pewter tankard, clearly dated 1784.

At least one O. Henry spot remains just about as he knew it: Grove Court, off little Grove Street, deep down in Greenwich Village, where his tale, "The Last Leaf," had its origin.  Front a bend of the street you look through an iron gate into a quaint nook of old-time houses in the rear of the block, with green growing things making a Springtime landscape at their doorsteps.  You can enter the gate and see the ivy vine where seemed to hang the left which the old artist painted on the brick wall by lanternlight to give a dying girl the courage to get well."

Mrs. Robbins and her two sons, Alan and Robert (both sculptors), were still living in No. 5 when the City Planning Commission proposed to eradicate Grove Court.  Meyer Berger wrote in The New York Times on December 8, 1954 that the Commission "is toying with the notion of wiping Grove Court off the map, and some twenty other buildings with it.  The report is that the city wants the space for a playground." 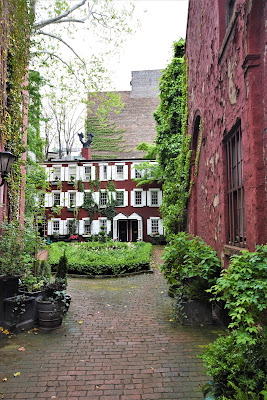 Using his trademark prose style, Berger painted a romantic picture of the hidden mews. "When you're past the gate, at the very spot where Grove Street bends, between Hudson and Bedford Streets, it's as if you had just stepped in from London's Berkeley Square--winter-stripped trees, lovely doorways, sleeping gardens, bits of statuary.  The illusion is perfect at twilight and after dark."

"Lying in their beds under the ancient rooftops and chimney pots, the tenants get only the heartbreak wail of groping river traffic on foggy nights--that and, now the almost audible tread of Progress and the playground," he wrote.

Berger's eloquent intercession may have been partly responsible for the City Planning Commission to scrap its plan the following day. 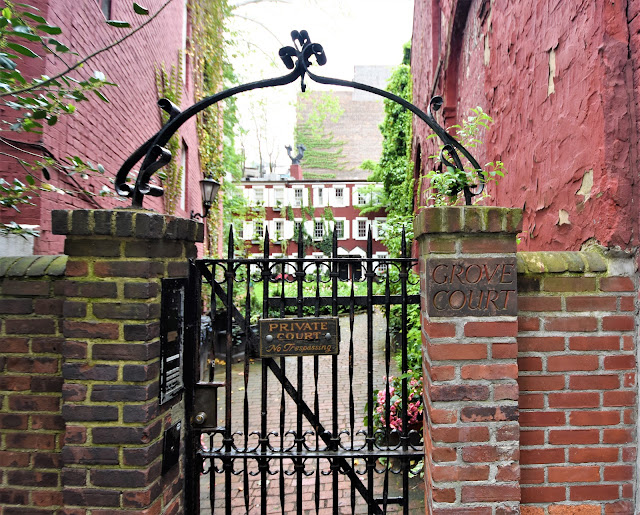 The iron gate is no longer unlocked, and a small sign warns "No Trespassing."  Within the courtyard the tranquility is as overwhelming as the charm.  And the casual passerby who peers between the iron bars could hardly imagine its squalid beginnings.