The French Second Empire style Masonic Temple, designed by Napoleon Le Brun and dedicated in 1875, was a landmark at the northeast corner of Sixth Avenue and 23rd Street at the turn of the last century.  But the structure had suffered a severe fire and was the target of modern critics who termed its an abomination.

Additionally, the significant commercial value of the land it sat upon was not lost upon the Masons.   In 1905 the Masonic Hall and Asylum Fund purchased the old structures directly behind the temple at Nos. 46 through 54 West 24th Street, and began Step One in an ambitious project.   Spokesman Frank E. Haff told a reporter in December that year that "a 12-story fireproof building, to be devoted to lodge rooms and offices to connect with the old temple...will be erected."

Architect Harry Percy Knowles was commissioned to design a high rise building which would include the traditional historic-themed lodge and meeting rooms which had become synonymous with the Masons.

Construction was begun in 1907 and completed in 1910 at a cost of $1,507.250.  The original 12 stories had grown to 18 by then.  Knowles's Beaux-Arts style structure had its share of carved ornamentation--swags, festoons, and an extraordinary seal above the doorway, for instance--but it was the masterful brickwork within the center section that drew comment.

A virtual tapestry of multi-colored bricks, the facade included diamond patterns produced not only by color, but by projecting bricks.  On October 3, 1908, the Record & Guide said the building "will be one of the finest examples of decorative brickwork in New York."  The article said the technique had never before seen in America, calling it "a reproduction of the mosaic-tile work found in Persia five hundred years ago."

With the temple proper completed, the Masons embarked on Step Two--demolishing the venerable Masonic Temple on 23rd Street.   On March 12, 1911 The New York Times reported that "before the end of this month the old Masonic Temple, which has stood for about forty years...will be but a ruin of its former grandeur.  Workmen are already ripping out the interior, and early in April the excavations will be well advanced for the towering nineteen-story building which is to rise on the site."
Harry P. Knowles designed the 19-story office building, which would internally connect to the Masonic Temple.  The Real Estate Record noted "The exterior of the new building, while it will not be as ornate as the Masonic Temple in 24th st, of which it is to be a part, will be similar in design and coloring."

The Masonic Hall Building was completed in 1912 at a cost of $1 million--more than 26 times that much today.  The ground floor was divided into retail shops; the largest of which at the corner was leased to the Excelsior Savings Bank.  A wide variety of tenants moved into the upper floors.  Among the earliest were women's apparel companies Epstein Underwear Co. and Wohlfart Fashion Co., and Lewis Goetze Co..

Another original tenant was the General Film Company which leased the 19th floor (about 15,000 square feet of space) in October 1912.  The firm ran motion picture theaters around the city.   Another tenant in the motion picture industry was Picture Playhouse Film Company, Inc., which rented films to independent motion picture houses.

Not very long after General Film Company moved in movie canisters began disappearing from the its theaters.  The thefts went on for months and General Film was not the only victim.  Films were mysteriously disappearing from other motion picture theaters, as well.  According to Harry Buxbaum in January 1914, "The General Film Company in the last ten months has lost films worth $150,000."   He was speaking out in response to the arrest of Samuel Marcusson and his clerk, Morris Daniels the day before.

After several other messenger boys were arrested, Marcusson and Daniels were charged with "running a moving picture exchange business with a stock made up largely of stolen films."

The offices of the Protestant Council of the City of New York would operate from No. 71 West 23rd Street for decades; remaining until 1959.

In 1915 the Government wrestled with what was termed the "Bread Crisis."  The price of wheat had skyrocketed from 94 cents a bushel to $1.70.  And while Washington considered an embargo on grain, the State Department of Foods and Markets, a tenant in the Masonic Hall Building, approached the problem from a different angle.

On February 11 the New-York Tribune reported "Commissioner Dillon, of the State Department of Foods and Markets, at 71 West Twenty-third Street, said yesterday that the department had made experiments in mixing corn and wheat flour, which lead them to believe that a full-weight loaf of bread could be made which was both palatable and nutritious and in some ways preferable to all wheat bread."   Four days later The Sun announced that Dillon "will place on exhibition at 71 West Twenty-third street to-day sample loaves of bread made of corn and wheat flour that can be sold for 5 cents."

Among the several lodges that met in the 24th Street temple was the Kane Lodge, F. & A. M., named for member and Arctic explorer Elisha Kent Kane.  As the 100th anniversary of its naming of the lodge neared, the Kane Lodge struck a medal which was to be presented to Rear Admiral Robert E. Peary in commemoration of his discovery of the North Pole.  Unfortunately, Peary died before the ceremony in the Grand Lodge room on March 30, 1920.  In his place, Peary's son accepted the medallion.

The Kane Lodge routinely met in the Renaissance Room; but reserved another room for its wealth of historically interesting relics.  Among them were the Masonic flag Kane had planted with the American flag on Grinnell Lane; flags presented to the lodge by Polar explorers Adolphus W. Greely and Admiral Peary; and the figure head of Kane's ship, the Advance.

The lodge's connection with Arctic explorers continued the following year when Donald B. MacMillan shoved off in his "sturdy little Arctic cockelshell, the Bowdoin," as described by The New York Herald on July 17, 1921.  The article noted that the explorer had "close to his bosom" two small American flag, one of which was presented to him by the Kane Lodge.

"'Mac' says that if he should not be destined to return, these flags will be upon his body, but that, should he live to come back, he intends to restore each flag to the donor with a written log of his trip attached to it."  He returned.

In the meantime, the 23rd Street building continued to see a wide range of tenants.  At the time of MacMillan's expedition the Urban Motion Picture Co. was here, as was the Carnito Company, manufacturers of electrical instruments, and the Five to Fifty Cent Stores Company.

What should have been a joyous ceremony in the Empire Room on the Masonic Temple on April 19, 1932 turned into tragedy.  About 200 members were there that night to celebrate banker Robert L. Smith's four decades of membership.  Following a speech by grand master Charles H. Johnson, Smith was escorted to the platform by his son, Robert B. Smith, and several high-ranking important members.


The excitement may have been too much for the elderly man.  When he reached the dais he suffered a fatal heart attack.

The following year an especially high profile member, President-elect Franklin D. Roosevelt, helped raise his son, Elliott, to the degree of Master Mason.  On February 17, 1933 The New York Times reported "The lodge room was closely guarded within and without by Secret Service men, detectives and uniformed policemen who are members of the ancient fraternity...More than 1,500 blue lodge Masons crowded into the Grand Lodge Room to see the President-elect take part in the ceremony."

Among the new President's accomplishments would be the formation of the Work Progress Administration.  At least two branches, the Federal Theater Project and the Education Projects, became headquartered in No. 71 West 23rd Street.   On November 10, 1936 officials in the Education Projects offices discovered that even normally unexcitable school teachers could be confrontational when faced with unemployment and desperation.

A group of 37 members of the Unemployed Teachers Council descended on the offices that day, demanding they be given jobs within its Adult Education Project.  When they were told they needed to make an appointment to speak with WPA Administrator, Colonel Brehon B. Somervell, they snapped.  The entire group was arrested for disorderly conduct.

It was not the end of trouble.  The following year, on June 29, 1937, 126 WPA "stand up" strikers took over the offices.  As they were being ejected by police, another 500 "tried to battle their way through police lines" on the street, according to The New York Times.  The newspaper reported "sympathizers clustered around a rear entrance to the building punched, kicked and clawed in a vain effort to rescue the men and women whom the police were bundling into eleven patrol wagons."

Following the United States's entry into World War II Masons donated space in the 23rd Street building for a servicemen's center.  It was dedicated on May 22, 1943 and provided recreational and dormitory facilities.  A spokesman said "The center will be maintained through contributions of $1 a month by each member of the State Lodge to the Masonic War Chest."

The center provided 75 beds on the second floor and was available to all service men, whether they were Masons or not.  The center remained throughout the war, closing finally in November 1947.

Beginning in 1958 and continuing for several years, the 23rd Street building took part in an early example of environmental protection.  On October 23, during Cleaner Air Week, 29 helium balloons were released from the roof.  The purpose was to "give an indication of how far pollution can travel in the air stream," explained Dr. Leonard Greenburg, the Commissioner of the Department of Air Pollution Control. 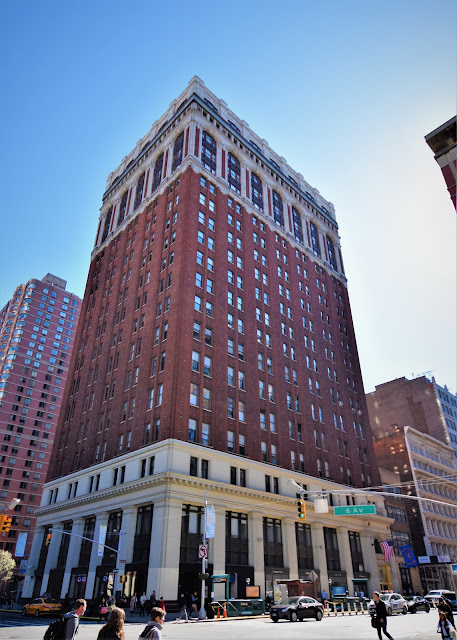 A facade restoration of the buildings was conducted in 2016 which included dismantling and rebuilding parts of the parapet of No. 71.  The dual buildings are essentially unchanged architecturally.