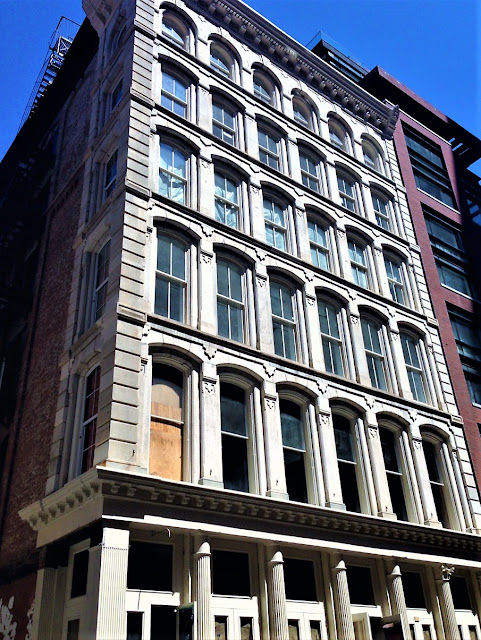 Carpet dealer Elias S. Higgins plunged full force into the flurry of new construction that swept New York City after the Civil War.   In 1867 he began work on the Grand Hotel on Broadway at 31st Street, designed by Henry Engelbert.   The architect would design the even larger, more impressive Broadway Central Hotel for Higgins in 1871.

It was not a hotel that the two men worked together on in 1867 at Nos. 80-82 White Street, but an elegant loft and store building.   Faced in white marble above a cast iron storefront, the six-story building was completed in 1868.   The Italianate-style facade would have been typical of the scores of buildings going up in the district were it not for Englebert's neo-Grec detailing.  The architectural style had only just begun appearing in America and the elements--like the stylized capitals of the pilasters--took the design to the cutting edge. 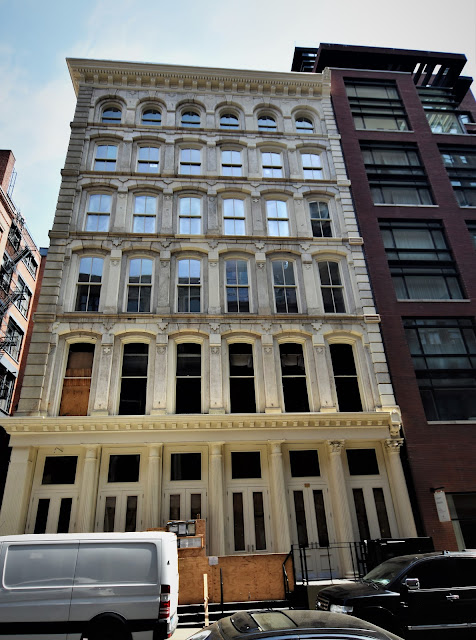 By March 1868 the new building had became home to Sullivan, Randolph & Budd, importers of "woolens and goods for men's wear."  At the time it claimed to be the oldest textile house in the United States.  Founded around 1834 as Wilson G. Hunt & Co., the name was changed in 1864 when long-time employees Naham Sullivan, Peter F. Randolph and William A. Budd took over.

The firm had barely moved in when the 1868 guide History of New York City; From the Discovery to the Present Day described the "handsome marble structure."  "The building...is six stories high, with a splendid lofty basement, fitted up in the most complete and admirable manner.  A powerful steam-dummy performs the work of hoisting and lowering from basement to roof."

The firm's offices were on the first floor ("very tastefully arranged") as well as the sales room.  "The other principal floors are devoted to a complete stock of foreign and domestic fabrics, together with a full assortment of trimmings, etc., while in the top floor is stowed a large surplus."

Not mentioned in the article was Meinhard Bros. & Co., wholesale clothing merchants.  Based in Georgia, the company sub-leased an office in the White Street building.

Sullivan, Randolph & Budd was well-known for its durable uniform fabrics.  The firm supplied goods to West Point and other military schools, as well as the city's Municipal Police Department and other police organizations throughout the country.

But behind the scenes, there seems to have been discord among the management.  Shortly after taking over No. 80-82 White Street, the firm was changed to Sullivan, Budd & Co., then in 1871 to N. Sullivan & Co.  One by one Naham Sullivan's partners had dropped out.

After Sullivan & Co. moved to No. 329 Broadway around 1873 the White Street building became home to several smaller firms.  One of them, possibly Meinhard Bros., did not identify itself in an advertisement that appeared in The New York Herald on October 26 that year.  The wholesaler was offering excess stock to individual, private customers off the street:

Clothing at Your Own Use at wholesale prices, at 80 and 82 White street, up stairs, first building east of Broadway.  You can buy for the next 60 days, from our large and beautiful stock of Clothing, single Garments for your own use, and save you from 25 to 50 per cent.  Fashionable styles, equal to custom work.

An interesting tenant by 1875 was the Bureau of Indian Affairs.  The White Street office was in charge of filling the annual supply list necessary for the Indian missions and reservations throughout the West.  On April 28, 1875 The New York Herald reported "Commissioner Edward P. Smith, of the Indian Department, held his annual reception yesterday, at No. 82 White street.  It was largely attended, and the visitors walked up and down and stood in groups discussing the prospects of the coming season, while the Commissioner read out the bids on which they proposed to supply the wants of 'Poor Lo.'" (Poor Lo! was the term commonly used for the group of missions.)

There were approximately 300 bidders whom the article identified as mostly from the West and "were nearly entirely composed of Indian contractors."  The men placed bids for contracts on everything from shoes and blankets to beef.

Also in the building at the time was dry goods merchant Charles M. Aikman & Co.  The firm was the target of inveterate thieves George Callahan, alias "the Countryman," and Charles Murphy, alias "Cheek," on the night of April 24, 1876.  The men were members of a gang of burglars wanted for a string break ins.  This time, however, they were spotted when they rushed down Courtlandt Alley with $500 worth of lace curtains and piano covers from Charles M. Aikman & Co.

The eyewitness account helped lead to the arrest of the pair along with their cohorts, John David, John Roche, alias "Casino," and James Stapleton, alias "Buck."  For the White Street burglary, Callahan and Murphy were held on $2,000 bail each--more than $47,000 today.

On February 19, 1880 a massive fire consumed the building at Nos. 384 and 386 Broadway, at the corner of White Street.  As the inferno spread to No. 388 firemen broke into No. 80-82 White Street and directed hoses "from the roof and windows," according to The New York Times.  Two fire fighters died fighting the blaze and the Broadway buildings were destroyed.

Even the gap provided by Courtlandt Alley could not prevent damage to the White Street structure.  The following month The Record & Guide reported that Higgins had hired architect William H. Holmes to repair the fire damage.

In the mid-1880's Wm. Topping & Co. operated its auction house from the address.  The firm sold off over-stocked goods or the residue from bankrupt firms, as well as real estate parcels.

A notable tenant in the 1890's was the carpet retailer Morris & McKay.   Its extensive line included not only carpeting, but "oil cloths, rags, mats, etc."  Mostly forgotten today, decorative oil cloth mats mimicked rugs and were placed beneath tables for easy clean-up and to protect expensive carpeting.

They were enough to lure an important tenant by 1903, the Rhode Island-based Clark O. N. Thread company.  The quality maker constantly battled counterfeiters, as was reported on April 30, 1904 in The Sun.  The article noted "Last winter persons in the trade brought to the Clark offices at 82 White street reports that the Clark thread was being sold in the West in large quantities at prices very much below the market quotations.  An investigation showed that the Clark trade mark stamp had been counterfeited."

In 1911 it participated in a educational project in high schools nationwide.  The Annual Report of the Minnesota State High School Board that year explained "Not a few schools are acquiring illustrative material for their industrial department" and provided a list "of educational exhibits, which may be obtained free of charge by making courteous application to the addresses given below."  Included was Spool Cotton, which offered examples of "spool cotton and needles."

A major change came in 1913 when Jenkins Bros. leased the entire building.   Makers of plumbing valves, the firm was nationally recognized.  Their main plant was located in Bridgeport, Connecticut.


The dependability and quality of the Jenkins projects was best evidenced when the firm was contracted to produce the valves for United States naval ships during World War II.  Following a worker walk-out in 1944, an Executive Order from the White House directed "that all employees were instructed to report for work immediately."

The Government went a step further.   On April 13 that year an order from the War Department read "Sec. of the Navy authorized to take possession of and operate the plants and facilities of Jenkins Bros, Inc."

Following the war Jenkins Bros. returned to business as usual.  In the spring of 1949, after more than three decades at No. 80-82 White Street, it signed a lease in the new building at No. 100 Park Avenue.  On May 18 The New York Times announced that the White Street building "was sold by the heirs of Eugene Higgins."  The buyer, it said, "plans to occupy the building when it is vacated by Jenkins Bros."

For decades the General Hardware Manufacturing Company occupied the building.  By 1992 the Tribeca renaissance had reached White Street and Art In General, a non-profit exhibition space, leased space in the building.

A substantial renovation and restoration began in 2016 to transform No. 80-82 White Street to retail space, offices, and an apartment.   Still owned by General Hardware, now General Tools, the firm announced it was vacating the premises.  It had commissioned the firm FSI Architecture to do the work. 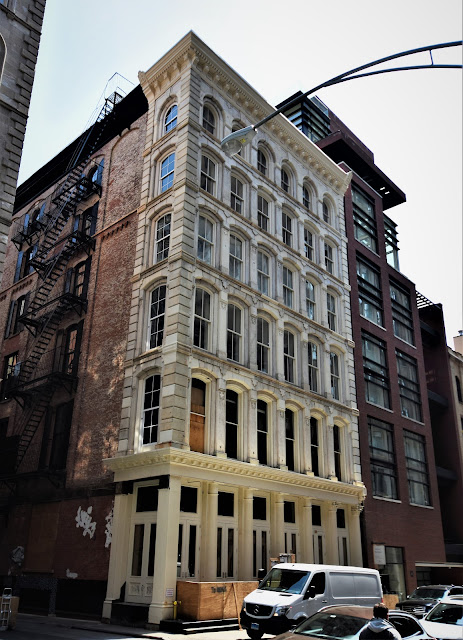 In May 2017 Artists Space, a non-profit gallery, announced it would be moving to the renovated building.