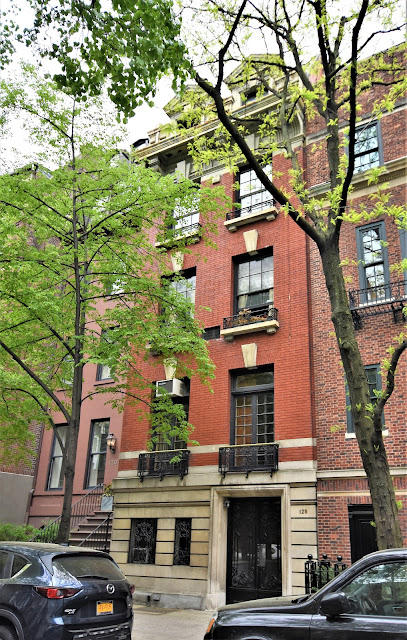 In 1869 developers R. & J. Cunningham completed a row of five brownstone-fronted houses on the south side of East 70th Street, between Park and Lexington Avenues.   Designed by prolific architect John Sexton, they were architecturally up-to-date with stylish mansard roofs perched atop the otherwise Italianate-style homes.

The purchasers of the western-most house, No. 128, were a young family.  Soon after they moved in, on October 6, 1869, an advertisement appeared in The New York Herald seeking "A nurse to take care of two children and to do light chamberwork; must understand sewing and bring city reference."

By the late 1870's the house was owned by Hiram D. Peet and his wife, Caroline.  It is unclear whether they ever lived here; but by 1878 they were leasing the property to Marcus Otterbourg and his family.  Otterbourg was a colorful and often controversial figure in American and New York City history.

Following the end of the Civil War the Government had turned its attention to the uprising against Emperor Maximilian I of Mexico.  Secretary of State William Henry Seward sent Otterbourg to Mexico in April 1866 as interim charge' d' affaires to the administration of President Benito Juarez.  In his 1914 book Maximilian in Mexico historian Percy Falcke Martin credited Otterbourg with saving the lives of many political prisoners.

"Mr. Marcus Otterbourg was occupied almost entirely in conducting negotiations with the Mexican government either for the release or the betterment in treatment of the many captives in their hands," he said in part.

Not everyone was so impressed with Otterbourg.  The New York Herald was unapologetically biased in its political reporting and for years had slammed Otterbourgh.  It commented on his hopes to be appointed a police magistrate on June 21, 1873 saying simply, "There is not a vestige of a chance for Marcus Otterbourg."

But, in fact, by the time the Otterbourg family moved into No. 128 he had been a judge in the police court for years.  The couple had three sons and a daughter.

There was quite a bit of excitement on the night of December 2, 1878.  Mrs. Otterbourg's brother, Peter Hilger, had come from Philadelphia for a visit.  Following dinner he and Marcus went to the library on the second floor and Mrs. Otterbourg retired to the front parlor.   Two of the Otterbourg young adult children went for a walk.

As Eugene Otterbourg and his sister turned from Park Avenue onto 70th Street, two men ran past them.  They were immediately followed by "a man wearing slippers, an alpacca [sic] duster, and spectacles, without his hat, much out of breath, and running with all his speed," as described by The New York Times.  That man, they quickly realized, was their father.

Eugene dropped his sister's hand and took up the flight.  He chased the men to Third Avenue and 73rd Street before they were lost in the crowd.  He returned home still not knowing why he had been chasing the them.

He discovered that his mother had checked on a noise she heard in the hall and discovered two men were removing overcoats from the coatrack.  Alerted by her screams, Otterbourg ran down the stairs in his slippers and out the door in pursuit of the thieves who made off with Hilger's and George Otterbourg's overcoats.

A lamp was used to search the streets for the overcoats.  Only George's was found.  The Times reported, "George is a young man, still at his collegiate studies, and he was much displeased when his overcoat was returned to him.  He had worn it some time, and he remarked, when Eugene handed it back to him, that if the thief had only retained it, his father would have been compelled to buy him the new one he had been pleading for all the Fall."

The newspaper added "The Justice caught a severe cold from his race in slippers."

The Otterbourgs remained in house at least through 1884; but they were most likely still here in 1887 when Caroline and Hiram Peet transferred title to No. 128 to their daughter, Carrie, as "a gift."   By 1899 Dr. Max Rosenberg was her tenant.  He was Assistant Physician in the Mt. Sinai Hospital Dispensary and an Instructor in Medicine at the New York Post-Graduate Medical School and Hospital.  He remained here until Carrie Peet sold the house to Mary T. Spencer in May of 1903.

Mary would not retain ownership for long.  In September 1904 she advertised the 20-foot wide house for sale, interestingly noting it "will be put in perfect order."  On September 16, 1905 the Real Estate Record & Builders' Guide reported that Mary T. Spencer had sold the house, adding "The buyer has given A. Busselle, architect, an order to remodel the house into an American basement."

Two months later there was a change in architects.  On December 16 the Record & Guide reported that Clement B. Brun would be doing the $15,000 in renovations for T. J. McLoughlin.  The extensive remodeling included a four-story extension to the rear, a "new front," and reconfigured interior walls.

Brun transformed the out of date brownstone into a modern neo-Georgian style home.  With the stoop removed, the front wall was pulled to the property line.  Three stories of red brick sat upon a rusticated stone base where the double-doored entrance sat within a molded frame.  Tall casement windows at the second floor imitated French doors and were fronted by pseudo balconies.   Above the bracketed stone cornice the mansard featured two pedimented dormers. 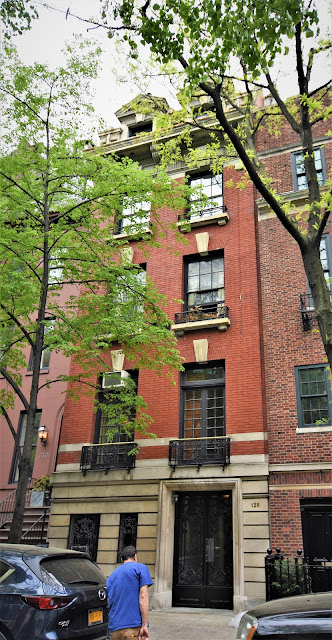 McLoughlin sold the completed house in 1907 to William Edward Schenck Griswold and his wife, the former Evelyn Sloane.  The had been married in Lenox, Massachusetts early in September that year.  Following their honeymoon trip, The Sun reported "Mr. and Mrs. William E. S. Griswold are now in their new home, 128 East Seventieth street," on January 5, 1908.

The Griswolds were socially prominent.  William was related to the Webb and Burden families, and Evelyn was the daughter of John W. Sloane, partner in W & J. Sloane, Inc.  Her uncle William was married to Emily Vanderbilt.  Not coincidentally, Griswold would eventually become president of W. & J. Sloane.

The couple summered in the Griswold country estate, Black Hall, in Old Lyme, Connecticut.  Evelyn would eventually inherit her father's estate, Wyndhurst, in Lenox, as well.  They returned to No. 128 every winter season through 1914.  Then on March 28, 1914 The Record & Guide reported they had leased the house for three years to banker Louis Morris Starr.  But, in fact, they would never return.

The Starrs purchased the house in February 1919.   Louis was the son of Theodore B. Starr, one of the preeminent jewelers of the 19th and early 20th centuries.   In 1898 he had married Emeline Jenkins Danford.  The couple had three daughters, Caroline Margaret (who went by her middle name), Beatrice and Emeline.  The family maintained a country estate, Ontaroga Farm, in Ridgefield, Connecticut.

The Starr family traced its American roots to Dr. Comfort Starr who arrived in Massachusetts in 1634.  Louis's career in banking most likely came as a surprise not only to his family but to society in general.  Until 1908 he had been president of his father's firm, Theodore B. Starr, and he was nationally-recognized as an expert in gems.  But that year he sold his interest in the company and turned to finance.

The same year the Starrs purchased No. 128 Emeline introduced Margaret and Beatrice to society.  The girls were born in 1899 and 1901, respectively.   The debutante events began with a reception in the house on December 13.  In the evening Emeline took the group of young women to the theater, then to the Crystal Room of the Ritz-Carlton "for dancing."

The first of the daughters to lave East 70th Street was Beatrice, whose engagement to William de Ford Beal of Boston as announced in July 1922.  The wedding (deemed by the New-York Tribune as "prominent") took place in the Central Presbyterian Church on Madison Avenue.

1927 was a remarkable year in the Starr household.   The house was the scene of Caroline Margaret's wedding to Theodore Carrington Jessup on the afternoon of March 24.  Her sister, Emeline, was her maid of honor.

Louis and Emeline remained at No. 128 East 70th Street until his death in February 1936.  In July 1943 it was sold to Coulton Waugh and his equally well-known wife, Elizabeth Jenkinson Waugh.

The multi-talented Waugh was an artist, cartoonist, teacher, textile designer and author.  His cartoon illustrations included Milton Caniff's "Dickie Dare," "Terry and the Pirates," and "Hank" (his own comic strip).  He wrote a series of instructional texts on painting and other books.

Elizabeth was also an artist as well as an authority on hooked rugs and the author of Collecting Hook Rugs.  She also wrote the biography Simon Bolivar and the 1943 West Point.

The couple's country home, Green Pastures Farm, was in Newburgh, New York.  It was there, on March 20, 1944 that Evelyn died.

Five years after her death the house was converted to apartments, two per floor.   Its most celebrated tenant would be American novelist John Kennedy Toole, who shared the fourth floor apartment beginning in the spring of 1960 with friend Kent Taliaferro.  Toole's best known novel, A Confederacy of Dunces, would not be published until 1980, eleven years after his suicide. 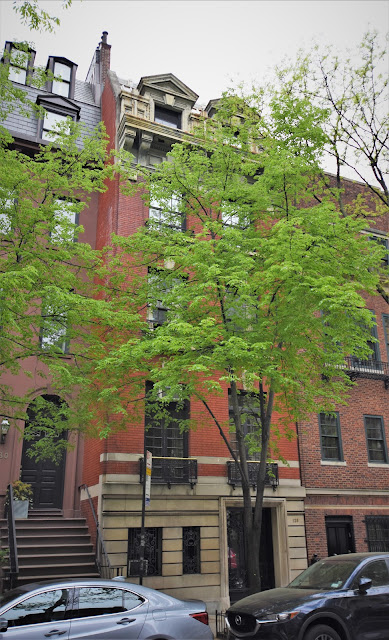 Outwardly little has changed today to the prim neo-Georgian house more than a century after its make-over.