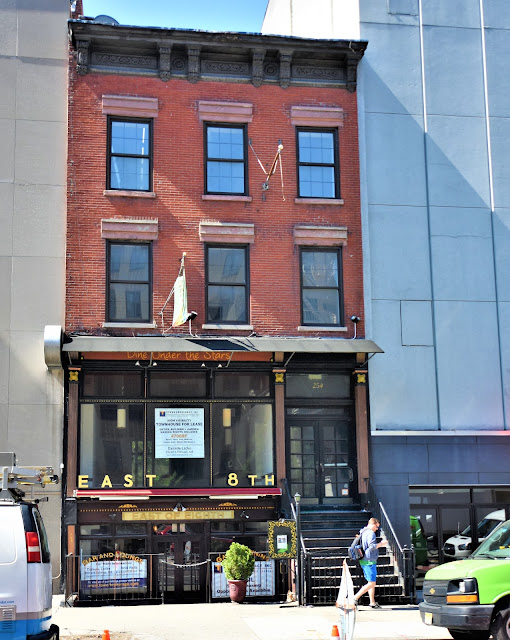 In the early 1850's the William O. Kent family lived in the new brick house at No. 254 West 23rd Street, just east of Eighth Avenue.  The 25-foot wide Italianate-style house was three stories tall above a high  English basement.  It most likely sported a handsome cast iron balcony at the parlor level.  Interesting molded lintels sat above the openings and an especially attractive cast iron cornice overflowed with foliate decorations.

Henry F. Kent worked for the City in 1854.  He was First General Clerk for the Street Department.  While the term "clerk" implies a menial position today, his was a supervisory, administrative job.

William O. Kent died in the house on Tuesday, January 15, 1856.  His funeral was held in the parlor three days later.

The following decade the owner or renter of No. 254 was looking for a new place to live.  Signing his advertisement in The New York Herald on February 7, 1864 simply "R.D." he announced "Wanted to Purchase--A four story high stoop House, between Thirty-fourth and Forty-eighth streets and Madison and Seventh avenues, for which all cash will be paid if wanted."

That he would pay "all cash" attested to his comfortable financial status.  His decision to move farther north may have had to do with the gradual changes in his neighborhood.   Before the decade was up West 23rd Street would be dotted with theaters, including Booth's Theatre and Bryant's Opera House, diagonally opposite one another at Sixth Avenue, and Pike's Opera House just steps away from No. 254, at Eighth Avenue.

R. D. was among the first residents to abandon the block, which was almost fully commercialized by 1887.  That year real estate dealers S. F. Jayne & Co. purchased No. 254 and commissioned the architectural firm of Napoleon Le Brun & Son (official architects of the Fire Department) to renovate it.  The plans, filed in August, called for "basement and first story wall to be removed, front wall shored up, &c."  The modifications, costing about $53,000 in today's dollars, included an iron staircase which replaced the stone stoop, and a cast iron storefront for the office in the basement level and the store in the former parlor.

On August 4, 1888 The Real Estate Record & Builders' Guide announced "The well-known and highly-respected firm of S. F. Jayne & Co. have removed from their old-time office at No. 233 West 23d street to handsome, commodious and well-appointed quarters opposite, at No. 254 West 23d street."

Four months later the journal remarked that business for S. F. Jayne & Co. had recently increased.  "This is due to their now having better facilities than ever for conducting their business in its various ramifications."  The firm was full-service; not only representing buyers and sellers, but managing properties.  It handled the collection of rents, appraised properties, managed estates, and sold fire insurance.  The technologically up-to-date company had a telephone installed when it moved in.  Its phone number was "21st st 432."

By 1901 the second floor store space was occupied by Charles A. Flammer, dealer in "American tiles."  His advertisements noted "art ceramic a specialty."

Around 1911 the upper floors became home to the Phelps School of Design, run by Ernest L. Phelps.  Among his instructors were illustrators Charles B. Falis and Earl Horter.

Ernest L. Phelps was drawn into a nationally-publicized legal case in 1914.  Ten Eyck Conover, a farmer from Browntown, New Jersey, sued Phelps for alienating his wife's affections.  The rather commonplace allegations would not have drawn much attention had it not been for the circumstances surrounding Mrs. Conover's desertion of her husband.

Both she and her daughter, Isabella, testified to Conover's "extreme brutality," as described by The New York Times.  Isabella told the court that "he always called her mother by unspeakable names, and that one night he dragged them both out of bed, and turned them out into the cold, with the flourish of a revolver as they retreated before him."

Mrs. Conover recounted the stories of her apparently masochistic husband torturing "a girl with a monkey wrench, had beaten another, and had hung another to a rafter by her thumbs."  The New York Times reported on February 7 that "There was much of this sort of testimony."

Newspapers as far away as North Dakota published the astonishing verdict.  On February 21 the Bismarck Daily Tribune reported "Ten Eyck Conover...got a verdict of $7,000 against Ernest L. Phelps."  The Times reported the obvious. "The verdict came as a surprise."

Ten Eyck Conover was not surprised.  He grumbled to reporters "I don't understand why God does not strike them down in court for telling such lies."

In 1916 S. F. Jayne's partner, A. M. Cudner, took over the business, changing the name to the Cudner Real Estate Co.  The firm would remain in the building until around 1922.  When Cudner sold the property in 1917, the Phelps School of Design was gone and the upper floors were converted to apartments.

Among the tenants were Policeman Frank Upton and his family.  When war broke out in Europe, Upton took a leave of absence from the police department to join the Engineer Corps of the U.S. Army.  During the battle of Chateau-Thierry on November 30, 1917 he and five other of the 11th Engineers were gassed and captured by a German machine gun squad.  One American, Private Albert Jensen, received a serious head wound.

Upton, now a corporal, spoke fluent German, a situation that seems to have been an advantage.  On March 22, 1918 Police Lieutenant Frank Rheinish received a letter from Upton with surprising information.  Saying he was temporarily at a "collection camp," he wrote "We have very few restrictions here, except that we can't go out as often as we would like to.  But, under the circumstances, we are being well treated by our 'friendly enemies.'"

Close inspection of the language, however, suggest that his friendly enemies may have been carefully monitoring the communication.  Upton referred to being taken to "the Fatherland," and called his captors "these good-natured people."  Once the Americans arrived at the permanent prisoner camp, the Germans did allow the captives to keep a their dog, Mut.  The canine was trained as a "trench runner," but had been wounded in the leg and demoted to mascot.

Nearly a year later, on January 18, 1919, The Sun ran the headline "Policeman-Soldier Safe" and reported that Frank Upton had "been released from a German prison, where he was taken following his capture, and is now safe with friends in an American camp in France."  The article mentioned that his wife and children lived in the 23rd Street apartment.

Four months later, back in Europe, a directive was issued that forbade military men to bring mascots home.   That included the 11th Engineers's good pal, Mut.  The New York Times reported "Farewells were said to goats, cats and dogs and the ship pulled away from their dumb friends."

Aboard the same ship with Upton was his former camp mate, Private Jensen.  Three days into the crossing Mut "mysteriously" appeared on deck.  The Times reported later "There was great rejoicing to see again the little dog."  But rejoicing turned to shock when the colonel in charge ordered the dog thrown overboard.  Frank Upton later recalled "Jensen stepped forward and said that if the dog was thrown over he would go after him."  The colonel considered Jensen's serious head injuries and decided to allow Mut to remain on board--more or less as what would today be called a comfort animal.

Back home in New York Frank Upton resumed his police duties.  On June 4, 1919 he responded to a commotion outside of No. 65 Central Park West. The watchman had summoned Officer Thomas McNamara after he saw a man crawl through a window into the building.  As Upton arrived on the scene, the burglar tossed loot out, including a fur neckpiece and a clock.  Then he exited the window.

The man looked at Frank Upton and said "Hello, Corporal.  How's everything?"  It was his former unit and prison mate, Albert Jensen.  Upton had the unenviable task of arresting Jensen and taking him to the West Side Court.  The New York Times said "Meanwhile, however, policeman or not, Upton could not help asking his prisoner about 'Mut.'"  (Mut, it turned out, had been allowed to leave the ship with Jenson.)

"While questioned at the court, Jensen appeared to be still suffering from shell shock, or from the effect of the bullet wound he had received in the head," said The Times.  He could not remember burglarizing the apartment, but said he would plead guilty, because "I must have done it if all these people say I did."

Although he was held on $1,000 bond, it was doubtful that he would be imprisoned.  Given his obvious trauma, the court said he would most likely be sent to a hospital.

Two years later another tenant was in the newspapers.  May Geraty was a member of the choir of St. John's Evangelical church on 11th Street at University Place.  Another member, 23-year old Astor Lagerienn, offered to escort her home following choir practice on the night of April 3, 1921.   The New York Times explained "Taking advantage of the fine night, the two strolled slowly through Madison Square Park, where loungers on benches were enjoying the balmy air."

Suddenly, at around 10:15, what The New York Herald called "a fusillade of shots" rang out.  Lagerienn dropped to the ground, struck in the neck and arm.  Another pedestrian, Arsog Chortrin was also wounded.  May's screams along with sound of five gunshots sent people running into the park from all around, including Patrolman Mortin.

According to The Times report, the policeman found May Geraty "wildly excited and totally mystified by the occurrence."  Neither of the victims had any idea why they were shot and witnesses had not seen where the shots came from or who fired them.  Largerienn was taken to Bellevue Hospital where, according to The Times, his wounds were deemed "serious" and according to The New York Herald, they were "superficial."

The survival of the venerable house looked dim in December 1943.  An investor had purchased No. 254 that fall, and now added the two-story building and the lumber yard at Nos. 250 and 252 to his holdings.  The Times suggested on December 8 that the unnamed buyer "now controls a plot of 7,500 square feet which he will hold for post-war improvement."

The combined properties were sold to the Broadway Savings Bank in October 1945.  The bank announced its intentions of constructing a new branch bank building on the site.  As it turned out, the bank used only two thirds of the plot for its monolithic structure, saving the Kent house in the process.

In the mid 1950's the shop level was home to the Regina Gallery.  Half a century before Chelsea would become known as an art gallery district, the space routinely exhibited group shows.  By the 1960's it was taken over by Wingate Florists.

A renovation of the lower levels in 1987 resulted in a restaurant space.  The Provencal-style Eze opened in 1988, prompting The New York Times culinary reviewer Bryan Miller to remark "The commercial strip of West 23d Street is hardly a gastronomic hub of midtown Manhattan...When the restaurant Eze appeared there, it was like a fragrant Provencal flower pushing through the craggy concrete."

It was a compliment to the restaurant, if not the neighborhood.

Two years later, on March 15, 1991, he was equally complimentary--to the restaurant.  "The softly lighted room with its well-distanced tables, sound-absorbing carpeting, soothing off-white walls and high ceilings is nothing short of an urban balm."  He called it "a pioneer of fine dining in this neighborhood."

Despite Miller's glowing reviews, Eze closed in April 1992.  The space would become another restaurant, East of Eighth--a popular Chelsea destination for years.  Writing in New York magazine, Coleen McKinney said "A short saunter from the Chelsea Hotel, Ease of Eighth may fly its rainbow flag high, but it welcomes all kinds." 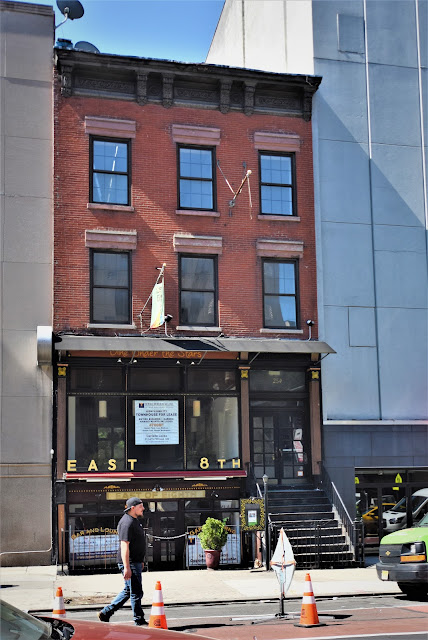 Then, surprising patrons and neighbors, it closed its doors with no notice in January 2017.  A sign pasted on the glass read simply "Forced to close it's [sic] doors."