Founded in 1628, the Reformed Protestant Dutch Church was the oldest religious sect in Manhattan.  As the city and its population grew, new congregations were organized and new church edifices erected each one inching further northward.
The Civil War interrupted development in New York City, but it returned with a flurry immediately afterward.  In 1869, the same year the cornerstone was laid for the impressive St. Nicholas Church on Fifth Avenue and 48th Street, the Collegiate Dutch Church purchased lots on Seventh Avenue and 54th Street for a "mission chapel" of the Collegiate Church on Fifth Avenue and 29th Street.

The subsequent Seventh Avenue Chapel, as it was called, was later described by the Year Book of the Reformed Protestant Dutch Church, as a "commodious edifice."  Construction was apparently rapid, for on October 23, 1869 the Street Commissioner ordered "that two gas-lamps be placed in front of the chapel of the Dutch Reformed Church, situated on the corner of Fifty-fourth street, and Seventh avenue."

In 1880 the Collegiate Dutch Church commissioned architect W. Wheeler Smith to enlarge and remodel the building.  A one-story chapel and Sunday school was added, a new roof installed and the facade rebuilt.  The renovations came at a cost of $7,000, just under $175,000 in today's dollars.

Smith put his trademark touches on the building, giving it a blend of Victorian Gothic and Romanesque Revival.   Stone band courses contrasted with the red brick to produce a striped effect, much like those he created on St. Nicholas Church.  The asymmetrical facade, the tall hip roof pierced by tiny dormers, and the inexplicable wafer-thin corner tower  resulted in an architecturally eccentric house of worship.

In 1885 the expenses of maintaining the chapel were weighing heavily on its mother church.  The Executive Committee complained "the chapel at Seventh Avenue and Fifty-fourth Street took all our resources of time and money."  On October 21 that year The New York Times reported on the annual meeting of the Classis of the Dutch Reformed Church.   The first item on the agenda was the reading of "a communication from the Mission Chapel of the Collegiate Church, asking that it be organized as a regular church."

The group promptly agreed to the reorganization, "which will take place on Nov. 15."  The Classis met in the Collegiate Church on Fifth Avenue and 29th Street the following month.  It was formally announced that the chapel was now an independent entity--Grace Reformed Church--and that the Rev. Joseph R. Rankin Duryee had been chosen as its pastor.   It was an expected and logical decision.  Since his ordination in 1879 Duryee had been the chapel's preacher.

The pastor's salary was placed at $2,500--about $65,800 a year today.   The Marble Collegiate Church was not totally off the hook financially, however.  It was pledged to contribute $2,000 a year for six years to the maintenance of the new church.

The 32-year old Duryee had graduated from Rutgers College in 1874 before his ordination from the Seminary of the Reformed Church at New Brunswick.  In 1882 had married Margaret E. Sloan in a fashionable ceremony attended by some of New York society's most recognized names, including Mr. and Mrs. Stuyvesant Fish, Mr. and Mrs. Chauncey M. Depew, the Cornelius Vanderbilts, and the Jay Goulds.

It was Margaret's personal fortune that allowed the family to enjoy an upscale lifestyle.  They lived in a comfortable Murray Hill home and maintained a summer estate, Wyndune, at Garrison-on-the-Hudson.

As the 19th century drew to a close changes in the general neighborhood caused alarm to many righteous residents.   In 1890 John Griffith operated the Sixth Avenue Hotel on Sixth Avenue at the corner of 44th Street.  When his liquor license came up for renewal, a flurry of protests were raised at the Board of Excise meeting on June 4.  The shocking testimonies prompted The New York Times to run the headline: "A BAD AND WICKED PLACE" the following day.

One week later more evidence was being heard and this time Rev. Duryee took the stand.  The Sun reported on June 13 "The Rev. Dr. Joseph R. Duryea [sic] of Grace Reformed Church...testified that his pastoral duties had brought him in contact with several young women who had been ruined in the hotel.  Some of them were dead."

That summer, while most congregants were away from the city, Grace Reformed Church underwent a "thorough renovation and much artistic decoration," as described by The Times on October 12.  The newspaper noted "this church has always been very cozy and, since the addition of the chapel, quite complete.  The recent decorations add to the brightness of the place, and the congregation enters upon the season with good reason for encouragement and the best of spirits."  The article noted that within the past five years the membership had quadrupled.

Churches often hosted educational lectures and Grace Reformed Church was no different.  On February 14, 1890, for instance, an "illustrated lecture on 'The Land of the Greeks'" was given by W. L. Cushing.  But perhaps no speaker garnered more attention that did Elizabeth Bacon Custer the following year.

On November 6 the widow of General George Custer gave her first public appearance, speaking on her latest book, Life on the Western Plains.  The New York Times reported "The applause and laughter of the audience showed the interest of her subject and the skill with which she handled it."

Among the items Mrs. Custer spoke about was the love of a cavalry soldier for his horse, the arrangement of buildings within military posts, and the dangers wives faced on the frontier.

"At our last post," she said, "none of the ladies went outside the post limits without an escort for three years.  It was hard to believe that the bluffs that looked so inviting were filled with Indians, lying behind sage and cactus, bent upon mischief.  When we all went out for a picnic one day an entire troop of cavalry, completely armed, accompanied us.  We were so accustomed to it then that we though nothing of it, and it is only since I have been living in the States that it has occurred to me that perhaps nobody but military women ever went on merrymaking excursions in such a manner."

Rev. Duryee officiated at many funerals, of course.  But it was an especially emotional service on April 21, 1906--that of his wife, Margaret.   By now the couple's four children--Marjorie, Maria La Grange, Elisabeth Sloan, and Samuel Sloan--were nearly grown.

Marjorie would be the first to wed.  She married Rev. Elmer Orlando Weld, assistant pastor of Brooklyn's Grace Church in November 1911.  They put off their wedding trip until May the following year.  Then devastating news arrived from London on June 17, 1912.

The Sloan family had been highly involved in the Farmers' Loan and Trust Company for decades.  Marjorie visited the firm's London office that morning, and waited for her husband there.  Weld was running late and at around 11:00 headed across busy Cockspur Street.  A telegraph explained that in dodging a taxicab, he did not see a motorbus coming around the corner.  "He was struck by the side of the omnibus and thrown on the asphalted street."  Weld was dead by the time he was taken to Charing Cross Hospital.

Happier times for the minister came eight months later when he announced that both Maria and Elisabeth were engaged.   The Times reported on July 6, 1913 that "The wedding of the two sisters will be celebrated at the same hour at the Summer home of their father in the early Autumn."

The idea of a double ceremony may have seemed a good idea for the sisters at the time, but as the date neared, they changed their minds.   Elisabeth was married in Wyndune on August 26 and her sister was married there about five weeks later, on October 2.  Their father, of course, officiated.

Samuel Sloan Duryee was a captain in the U.S. Army when the United States entered World War I in April 1917.  The conflict may have hastened his own wedding plans and he was married to Mary Ballard in Maine on August 20 that year.  Again, Rev. Duyree officiated.

One wedding he could not officiate was his own.  After being widowed for 14 years and with his children now gone, he married Mabel Dunham Thurber in 1920.  Concurrently, he resigned from the church he had served since 1879.

Whether Duryee's retirement was the catalyst is uncertain; but the same year that the only pastor the church had ever known stepped down, the Dutch Reformed Church closed its doors.  After it sat empty for nearly two years, The New York Herald reported on March 2, 1922 the Reformed Protestant Church had sold the property for $450,000.  The article noted "The Grace Reformed Church was abandoned as a place of worship in 1920."

Seven months later The New York Times offered more details.  Builder Marcus Brown, it said, had purchased the site "for a fourteen-story apartment house" and added "The undertaking, which will involve a total outlay of $1,500,000, will be started immediately."

The replacement building, known as The Congress today, survives. 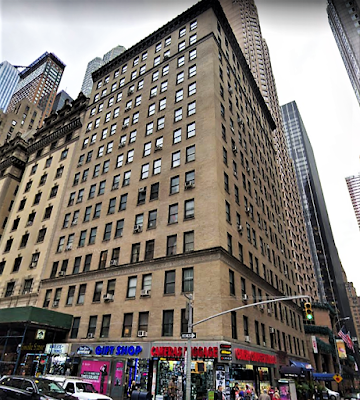