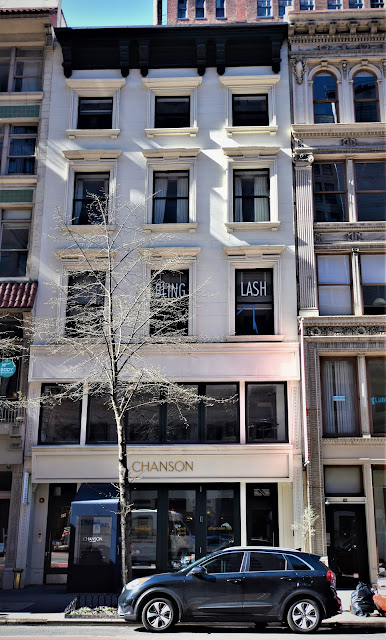 By 1853 the mansions of Fifth Avenue had reached as far north as the recently completed Madison Square.  The block of the avenue-wide West 23rd Street between Fifth and Sixth Avenues saw the rise of sumptuous row houses, many of which were as fashionable as their Fifth Avenue counterparts.

It was around this time that No. 20 West 23rd Street was completed.  The four-story Italianate-style mansion was faced in brownstone and sat above a high English basement.  A stone stoop led to the parlor floor where, almost undoubtedly, French windows opened onto a cast iron balcony.  The window cornices of the second and third floors were especially pleasing--balanced upon paneled blocks above the architrave frames.

The house became home to the 54-year old Daniel Leroy and his wife, the former Susan Elizabeth Fish.  The Leroy family had lived in a handsome Federal-style mansion at No. 20 St. Mark's Place.   Daniel and Susan had three children, Mary Augusta, Susan, and Stuyvesant.  The boy's name reflected his mother's distinguished family.  Susan's parents were Nicholas Fish and Elizabeth Stuyvesant.

The Leroys' neighbors were among the city's most socially prominent.  At No. 14 was George Frederick Jones and his wife, the former Lucretia Stevens Rhinelander (their daughter would earn literary prominence as author Edith Wharton); wealthy furniture designer and manufacturer Charles A. Baudoine lived at No. 24; and millionaire stockbroker Benjamin Nathan was at No. 12.

Those neighbors would see relatively little of the Leroy family.  They spent summers in their Bellevue Avenue villa in Newport and routinely traveled abroad.  On February 9, 1858, for instance, The New York Times reported that Daniel Leroy had been presented to Emperor Napoleon III in Paris; on July 12 the following year that newspaper's British corespondent reported "Amongst the Arago's passengers we notice Governor Hamilton Fish and family, Captain Pendegast and lady, United States Navy; Daniel LeRoy and family."

The Leroys were the victims of a brazen burglary on January 21, 1865.  A maid, Margaret Barret, answered the door to find two well-dressed young men who asked to see Mrs. Leroy.  Margaret showed them into the parlor, then went upstairs to inform Susan, who was in her dressing room which adjoined the bedroom.  Susan was not expecting visitors and she left to investigate, leaving her gold watch, the jewelry she had picked out for the day, and some cash on her dressing table.

One of the men, who introduced himself as Mr. Dart, produced a permit from a real estate agent to view the house.  Susan insisted that her home was not for sale and there was obviously a mistake.  When the men protested, saying that the permit "permitted them to make an examination of the premises," Susan rather foolishly agreed.

She took them through the dining room, but remained on the first floor when Dart went upstairs.  Another maid, Mary Vietch was surprised to see a man in Susan's bedroom as she was coming downstairs from the third floor.  She did not interfere, but the unusual circumstance caused her to make note of his appearance.

Later The New York Times reported that after the departed "Mrs. Leroy returned to her dressing-room to finish her toilet, and immediately discovered that her watch and money and a portion of her jewelry had been stolen."

Charles Andre and John Gallagher were arrested on February 25.  Sarah was taken to the jail to identify them where she received a frightening threat.   According to The Times, she "saw the prisoner and recognized him; [the] prisoner also appeared to recognize Mrs. Leroy, and told her to be careful how she swore against him."

At the trial, on May 3, Susan and the two maids appeared as witnesses.  During the proceedings it was learned that the pair "had made a business of visiting houses that were offered for sale or to let, and while looking through the premises made a practice of stealing whatever they could lay their hands on."

By the end of the 1870's commerce had encroached onto the West 23rd Street block.  In 1881 the family was permanently living in Newport and hired architect Charles W. Clinton to remodel No. 20 for commercial purposes.  The stoop was removed and a storefront and show window installed at the former basement and parlor floors.

Interestingly, Daniel Leroy kept No. 20 West 23rd Street as his official address.  According to court papers, following his death in Newport in 1885 Susan told the courts "her husband never intended to change his residence to Newport, and that she always considered herself a resident of New York," according to court papers.

No. 20 was leased to Michaelis & Kaskel, purveyors of expensive apparel and accessories.  Jacob Michaelis and Caesar G. Kaskel opened the original store on Bond Street in 1867.


In 1885 the partnership was dissolved and brothers Albert and Max Kaskel reorganized the firm as Kaskel & Kaskel, now selling only upscale menswear.   By the turn of the century Kaskel & Kaskel would be one of New York's leading haberdasheries, providing custom-made shirts for America's wealthiest men, including Presidents.

On April 1, 1893 the Real Estate Record & Builders' Guide reported on the auction of "The Le Roy Estate" properties.  The article explained that the properties consisted of East Side tenements, "with one notable exception."  That exception was "the important property No. 20 West 23d street."

The Guide said that a "hot competition" ended in the winning bid of $232,000; a staggering $6.5 million today.  The purchaser, A. Meyer, was "said to represent one of the heirs."  Indeed, the actual buyer was Mary Augustus Leroy King, daughter of Daniel and Susan Leroy.

Mary had never lived in the 23rd Street house; she married Newport millionaire Edward King in 1849.  But she was a shrewd dealer in Manhattan real estate and its was most likely the valuable location of the property rather than any sentimental ties that prompted the purchase.

An office in the upper floors was leased to the Gas Consumers' Association in February 1896.  A month later The Record & Guide explained "For a small monthly fee they take charge of gas service and electric apparatus in flat and apartment houses."

It would appear that the firm's employees were not fully trained in dealing with those often dangerous utilities.  On December 8 that year John Gaynor was called to Prospect Hall at No. 48 Orchard Street on a complaint of escaping gas.  In order to see better in the dark basement, he used a lighted candle.  It was a bad idea.

The Sun reported "He was burned in the explosion which resulted, and $200 damage was caused.  The report of the explosion excited the neighborhood."

By the time the Gas Consumers' Association moved out in 1907, the 23rd Street block was fully commercialized.  The entire building was home to the Pierce Rudyard Company in 1911, used both as its hat-making factory and retail shop.  Edwardian women's hats spilled over with exotic feathers, ribbons and, in some cases, actual stuffed birds.  Plumage from egrets, peacocks, and other colorful fowl were highly sought after and demanded high prices.

To protect its valuable stock, Pierce Rudyard Company had an electric burglar alarm installed.  The Times reported that "throughout the building, which they occupy alone, are strung wires connecting with a burglar alarm.  On the roof and at all doors and window these wires are less than four inches apart so that it is impossible to enter the place without causing the alarm to give its warning."

But early on Sunday morning, June 25, 1911, thieves managed the seemingly impossible.  When the watchman came on duty that night he found the skylight in the roof had been jimmied open and the entire top floor where the feathers were stored had been ransacked.  The electrical wires had been cut.

A firm spokesman said the $6,000 in missing feathers could easily have been packed in two bags which would have aroused no suspicion on the the street.  The Times reported "The police believe that the feathers were carried openly into Twenty-third Street.  Because of the impossibility of identifying feathers the millinery concern is resigned to the loss."

Pierce Rudyard Company would not stay on much longer.  On January 27, 1912 it was announced that "a fur company" had leased the building.  Wholesale furriers Hewitt & Cohen would remain at No. 20 for years, subletting space to smaller concerns, like the Vacation War Relief Committee which moved its headquarters from the Old Colony Club building to here in August 1917.

The group was formed by wealthy socialites like Ann Morgan and Mrs. August Belmont to provide wartime relief to French citizens.  On August 18 its executive secretary, Emily Chauncey, said that despite the disruption of the move "boxes filled with food and clothing destined for the hospitals in France, and one of the largest shipments ever made is to go forward next week."

At the time Ann Morgan was in France personally helping victims.  On December 2 The Times reported "Word has reached here that Miss Morgan is living right among the impoverished families that have been assembled to reconstruct the villages ransacked and pillaged by the invading Germans.  One writer sends a letter describing the heroic work done by Miss Morgan, who gives aid, no matter where the call comes from, even to the menial tasks that demand untiring, laborious duty as much as a generous outlay of money.  She has washed dishes, directed the classes in the impoverished schools, and has helped her French neighbors white-wash the walls of their homes."

The Vacation War Relief Committee headquarters remained at No. 20 West 23rd Street throughout the war.

Hewitt & Cohen was robbed of $5,000 in furs on November 27, 1920.  It would stay on in the building for another two years.   Then in August 1922 the building was leased to B. Tomby, Inc.  The New-York Tribune reported the firm "will use the premises, after being renovated, for their china, glassware and crockery business."

While other old brownstones along the block had been renovated beyond recognition by now, the Daniel Leroy house still retained its 1853 appearance above the showroom windows of the second floor.

B. Tomby, Inc.'s move to 23rd Street most likely puzzled many buyers.  Only a year earlier the firm, described by Crockery and Glass Journal as "probably one of the largest concerns of foreign china factory representatives in this country," had opened its newly-refurbished five-story building at No. 9 East 47th Street.   It, nevertheless, remained here until the business was closed in 1928.

Throughout the rest of the 20th century the building was a vast array of tenants--from Philip's Neckwear, which sold cravats, in the 1940's and '50s, to the Murphy Bed Center of New York in the 1990's.

In 1969 architect John Heller designed the modern storefront for owner J. P. Marenco.  But still the upper floors were left untouched, other than a coat of white paint over the vintage brownstone.  A glance above Patisserie Chanson today gives the passerby a peek into the mansion-lined 23rd Street block of 165 years ago when one of Manhattan's wealthiest families lived here.

photograph by the author