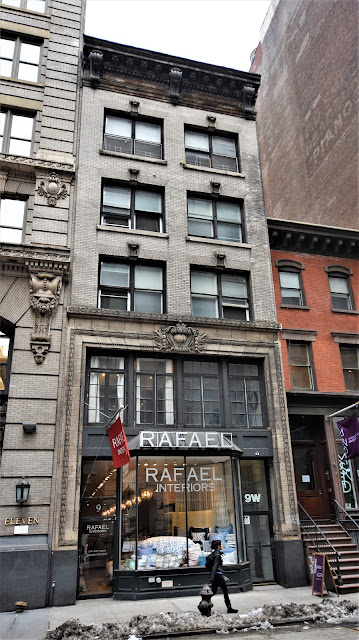 In 1850 Livingston Satterlee constructed a three-story brick-faced home at No. 9 West 19th Street.  A mirror-image of No. 7, the 25-foot wide residence featured the elegant details expected of wealthy homeowners just steps from Fifth Avenue.

By the 1880s it was home to Theodore Houston, his wife, Charlotte, and their son, Theodore, Jr.  Houston was vice-president of the New-York, Ontario and Western Railroad.  By the time the family moved in a seamless fourth floor had been added.

By late 1887 Theodore and Charlotte had moved into the apartment house at No. 80 Madison Avenue; possibly discouraged by the gradual change of the neighborhood from residential to commercial.   Houston retained ownership of the 19th Street house, however.  The New York Times noted in January 1888, "Mr. Houston was reported to have a comfortable fortune, and owned the house 9 West Nineteenth-street."

The reason that the journalist used the past tense was explained by the first line of the article.  "Just before the close of business yesterday a painful sensation was caused upon the Street by the announcement that Theodore Houston, well known as a railroad man...had committed suicide."

During the next decade developer Henry Corn would be highly instrumental in transforming the Lower Fifth Avenue district from one of brick and brownstone mansions to modern loft buildings.  In 1902 he purchased the 19th Street house, along with the similar one directly behind, at No. 8 West 20th Street.  He had earlier purchased the property abutting the 20th Street house.  The Evening Post Record of Real Estate Sales announced "He will erect a twelve-story loft building on the entire plot."

Something derailed Corn's plans and the proposed L-shaped structure never came to pass.  Instead he entered negotiations with restaurant operators Charles J. S. Heyl and Joseph Noethen to erect a five-story loft building that included a two-story restaurant at street level.

Henry Corn commissioned architect Robert Maynicke, who was already responsible for several of the developer's projects, to design the structure.   Completed in 1904 the neo-Renaissance structure was faced in gray-buff brick and terra cotta.  Maynicke had reserved the ornamental interest to the restaurant section, framing it in terra cotta garlands that trailed from an elaborate central cartouche.  A projecting shop window was flanked by two entrances--one to the upper floors and the other to the restaurant. Diners on the second floor could gaze out the four handsome sets of French windows.

Decoration of the upper floors was limited mainly to the scrolled terra cotta keystones and the rather ornate cast metal cornice.

Included in the stipulations of Heyl & Noethen were living quarters for at least one of the families.  Soon after moving in the Heyl family would suffer a devastating tragedy.  Dora Heyl joined the cheery group which boarded the steamboat General Slocum on the morning of June 15, 1904 headed to a picnic upriver.  Members of St. Mark's Evangelical Lutheran Church, the German group was composed mostly of women and children (it being a Wednesday and a workday).

Fire erupted on board and, in the worst loss of life in New York until the September 11, 2001 murders, the General Slocum rapidly burned to the waterline, killing an estimated 1,021.  Among the bodies identified was that of 18-year old Dora Heyl.

In 1906 Henry Corn sold the building to Stern Brothers, whose massive department store sat on West 23rd Street.  Heyl and Noethen still held the lease, subletting space on the upper floors to clothing manufacturers like Lion Infants Wear Co., on the fourth floor, and F. Hisch Co., makers of "cloaks and suits."

In June 1911, with bankruptcy on the horizon, Heyl & Noethen took out a mortgage on their "restaurant, wine and liquor business" from another German restaurateur, the well-known August Luchow.    The influx of cash postponed the failure until April 1912.  Luchow was now legally justified in liquidating their fixtures and stock to repay his mortgage.  Instead, he magnanimously instructed the courts that the Heyl & Noethen remain in "quiet and peaceable possession...and free enjoyment of same."

At the time brothers Charles and John Seigel had lunch here every day.  They were partners in the Star Piece Dyeing and Finishing Corporation at block away at No. 139 West 19th Street.  Expected regulars every lunchtime, the men continued their routine for 20 years.  Then on April 7, 1932 40-year old Charles was found dead in the stairway of the restaurant.  He had swallowed poison.  No one could imagine the motive for his suicide.

The tragedy did not end with Charles's death.  Two years later, on April 8, 1934, The New York Times wrote that "Ever since Charles Siegel...committed suicide two years ago yesterday, his brother, John Siegel, 40 years old, who was secretary of the concern, had missed him."

John was unable to return to the restaurant where he and his brother had shared their daily lunches for two years. Then, as The Times reported, "Yesterday, the second anniversary of his brother's death, and within an hour of the time, John Siegel went to the restaurant and ate a large meal.   Then he walked out toward the street.  Taking a bottle of poison from his pocket, he drank a fatal dose."

By mid-century the garment district had moved north of 34th Street.  The former restaurant was the bookstore, Veterans Historical Book Service, by 1951.  The books dealt with military history, like the Pictorial History of the Korean War which sold for $4 that year.  The proceeds went to the rehabilitation funds for the National Veterans of Foreign Wars.

Upstairs was the Haberstroh Film Studio, Inc., headed by Alex Haberstrom.  He produced education films and was a science fiction special effects expert.   In the 1950s he pioneered low-budget space films and the popular Captain Video television series.  The Times noted in December 1973 that "In 1962, excerpts of his 'First Men Into Space' simulated for many TV viewers, the earth-orbiting space voyage of John Glenn, the astronaut.  Among Mr. Haberstroh's other films were 'Trip to the Planets' and 'Space Probes,' produced in cooperation with Encylopaedia Britannica Films, Inc."

The tradition of a bookstore in the former restaurant space was continued in August 1995 when Revolution Books moved in.  The not-for-profit store specialized in Communist and "leftist literature."  It remained here until about 2011.

In the meantime, Robert Maynicke's handsome building perseveres relatively intact.   Although the ground floor entrances have been replaced, the projecting 1904 show window (albeit with new plate glass) survives, as do the striking French windows of the restaurant's second floor.