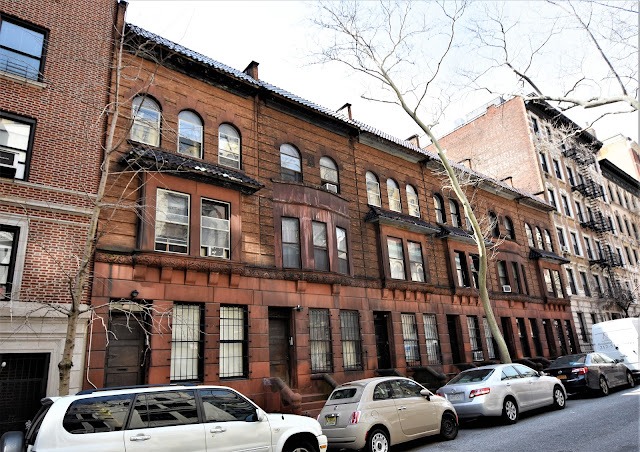 By the dawn of the 20th century architect Clarence F. True had designed so many structures west of Central Park that he would later be called "the face of the Upper West Side."  His personal take on historic styles often resulted in hybrids--Elizabethan Revival mixed with Flemish Renaissance, for instance.  His designs were, above all, always handsome and frequently charming.

A self-promoter, True suggested that he initiated the American Basement plan, which did away with the high stone stoops in favor of low porches, or none at all.  In fact, he may not have been the first to break the 40-year English Basement trend; but he was assuredly an early promoter. 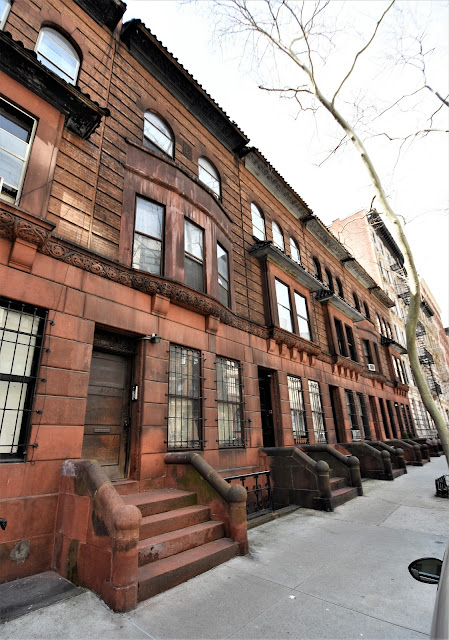 Each house in the A-B-A-A-B-A row had a projecting bay at the second floor, and arched openings on the third.  Most eye-catching, however, was True's addition of deeply overhanging roofs over the second floor bays of the "A" houses.  Their S-shaped tiles, or pantiles, evoked a Mediterranean feel.

The houses were purchased by well-to-do, but not overly wealthy homeowners.  No. 318 became home to the widow of Marcus G. Heilner, the former Sylvina Butler.  Marcus died in 1892, the year the house was completed.

The couple had been married in Philadelphia in May, 1839.  Later they moved to New York where Marcus established the coal and wood firm of Heilner & Son.  He was referred to by The New York Times as a "business man of prominence."  The Heilners had four sons and a daughter.

Sylvina could boast a distinguished Colonial and military ancestry.  She was descended from William Brewster, known as Elder Brewster, who arrived on the Mayflower in 1620.  Her grandfather, Colonel Zebulon Butler led the American troops against the English and Indian forces in the battle of Wyoming Valley on July 3, 1779.  It was a decidedly unsuccessful conflict, ending in a massacre of the Americans with only three surviving, Col. Butler among them.  Following the massacre, another ancestor, Rev. Jacob  Johnson, "first carried the Gospel as missionary among the Indians of Wyoming Valley," according to The Times later.

It appears Sylvina rented a room in the house.  In 1893 a carpenter, William Dick listed his address here.   He suffered a hand wound in April which threatened his livelihood, and his subsequent law suit drew the attention of the press.

The New York Times ran a sub-headline that read "Why Carpenter Dick is Suing Saloon Keeper Struever," and began the article saying "From all accounts Louis Struever has a most remarkably wicked dog."

Dick had gone into Struever's saloon at No. 281 Eighth Avenue to get a glass of "mixed ale."  The newspaper explained "When Dick had disposed of this beverage and had started to go out, the bad dog kept by Struever made a spring at Dick and began chewing his right hand, with the result that the carpenter, according to his own story, has not been able to handle a jackplane since."

Dick's $5,000 complaint accused "The defendant wrongfully kept a dog, well knowing him to be of a ferocious and malacious [sic] disposition and accustomed to attack and bite mankind, and suffered him to go at large."

The saloon keeper's defense was simple.  The dog did not belong to him.  The outcome of the court case is unclear.

Sylvina Butler Heilner's health began failing in 1896 and, after a long illness, she developed pneumonia around the first week of March 1897.  She died in the house on Saturday, March 27 and her private funeral services were held there two days later.  Her daughter, Laura, sold it to E. H. Laing in May 1900.

Three months later the row would gain another resident with an impressive military pedigree.  Lucy Adelina Sackett Hall lived at No. 326 with her 43-year old daughter, Elisa.  Lucy's husband, John Baley Hall, an "importer of novelties in French goods," had died in November 1886.

Now, catching society off guard, Elisa was married to Colonel William Whittlesey Badger in the 85th Street house on June 3, 1897.  The Sun reported "The marriage was a surprise to the friends of the bride and bridegroom, as no engagement had been announced prior to the wedding."

Badger, who was 62 at the time, was a grandson of prominent Revolutionary War General Joseph Badger; and a nephew of former New Hampshire Governor William Badger.   He earned his own military recognition during the Civil War.  In reporting on his marriage to Elisa, The Sun mentioned "He is a well-known practising lawyer of this city.  He fought through the war of the rebellion."

He not only fought during the war, in May 1862 he returned from duty in Washington to raise a volunteer regiment, which he did at his own expense.  That 105-man unit became the 145th Regiment, which fought in the Battles of Chancellorsville and Gettysburg, among others.

When Badger called the Commander of the regiment at Chancellorsville a coward, he was court-martialed and discharged from service in September 1863.  But he met personally with Abraham Lincoln to plead his case.  Lincoln restored him to duty and he served through the remainder of the war, eventually serving judge advocate at Macon, Georgia.

The middle-aged bride and her husband remained in the 85th Street house with Lucy.  Badger's law office was far downtown at No. 176 Broadway.  A year and a half after his wedding, on December 14, 1898, he was on the way to work.  As he reached the corner of 85th Street and Broadway, he began to falter.

The New York Times reported "Two young women who were passing at the time helped him into a nearby store, where he expired a few minutes later.  His death was due to heart disease."

In reporting his death, the newspaper listed his notable legal and military successes.  Then closed with a humorous anecdote to illustrate his good nature.

"After Mayor Van Wyck's election Col. Badger paid an election bet by exchanging places with a rubber [i.e., a masseur] in a Turkish bath, and giving the rubber a rub-down and shampoo."

A little over a year later, on February 20, 1900, Lucy Hall died.  Surprisingly Elisa lost the house in foreclosure later that year.


As owners and residents came and went during the first half of the 20th century, it was not a family, but an organization that purchased No. 316 in 1930.  In 1896 The Catholic Boys' Brigade was founded in England and Ireland.  A United States contingent was organized in October 1916 in the Church of the Holy Innocents on West 38th Street.  Now No. 316 West 85th Street became headquarters to the Catholic Boys' Brigade of the United States.

Three officials of the group moved into the house--its president, Rev. Kilian J. Hennrich, Michael J. Nolan, and Michael Lonergan.  The group took a $50,000 mortgage on the property, equal to $710,000 today.


The goal of the Catholic Boys' Brigade was to steer boys away from idleness and crime by providing after-school activities and discipline.  Rev. F. Segesser described its work to The Tablet, saying "The Catholic Boys' Brigade makes use of military drill organization and discipline, which is found to attract the boys very readily, and by means of which it is possible to control large bodies of boys effectively and to practice them in physical exercises, in obedience and submission to lawfully constituted authority, and in esprit de corps, which benefits them immeasurably, bodily, mentally and spiritually."

The boys from the Brigade were a regular presence in the many parades up Fifth Avenue over the years.  They wore military-type uniforms, drilled in precision, and followed quasi-military protocols including a rank structure.

In 1935 the group recognized the influx of a new type of immigrant--the Mexicans.  On June 7 that year Rev. Kilian Hennrich announced the formation of a new division, the White Star Committee, "which will be devoted to the development and execution of an Americanization plan for American-Mexican youths in this country."

By the time a benefit supper dance was held in the roof garden of the Hotel Pierre on April 16, 1937, the Catholic Boys' Brigade of the United States had a membership of 40,000 men and boy members throughout the country.  In reporting on the benefit, The Times elaborated "The work, which is under the sponsorship of Cardinal Hayes, provides patriotic, social, recreational, educational and physical training for its members."


Just a week earlier, an honor had been given to Mrs. Thomas J. O'Neill at No. 316 West 85th Street.  Mrs. O'Neill, president of the ladies auxiliary of the Brigade, received the medal "Pro Ecclesia et Pontifice" from Pope Piux XI.  The Times reported "The honor was granted by an Apostolic brief and was transmitted by Cardinal Pacelli, Papal Secretary of State."

The organization sold the house in 1941 to a developer who announced plans to convert it to "apartments of one and two rooms."  That conversion, completed in 1942, was the first along Clarence True's row.

Perhaps because of the extremely narrow widths, the houses were slow to be broken up.  No. 318 was converted to a basement-parlor duplex, with two apartments on the second and third floors in 1949.  No. 320 remained a single family house, with an apartment conversion on the top floor in 1963; and in 1989 No. 322 was divided into two residences.  Nos. 324 and 326 remain single family homes. 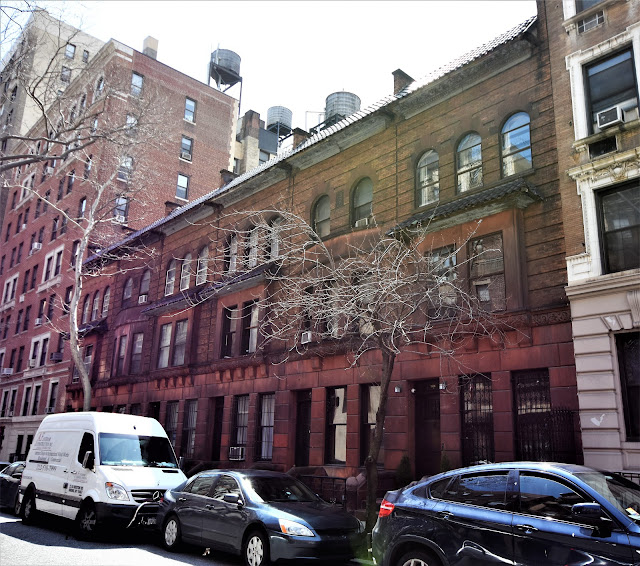 Although somewhat grime-covered, the row is remarkably intact--an especially charming and unusual group.