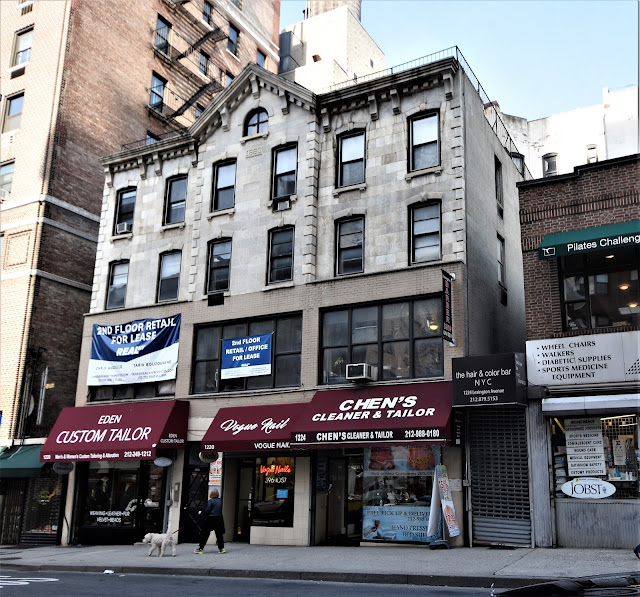 The British-born millionaire Joseph Richardson was listed as both architect and builder in 1880.  That year he began construction on three Italianate rowhouses at Nos, 1220 through 1224 Lexington Avenue, between 82nd and 83rd Streets.  The cost to erect the upscale homes was projected to be $20,000 each--more than $475,000 today.

Richardson designed the group to appear as a single, elegant mansion.  The concept was not new; as a matter of fact C. A. Pepoon had erected a similar trio nearly two decades earlier, at Nos. 178-180 Fifth Avenue.  What was strikingly unusual was the material Richardson used--marble.  At the time even the mansions of Manhattan's millionaires most often wore brownstone.   And even the William K. Vanderbilt chateau rising simultaneously on Fifth Avenue broke the brownstone tradition not with marble, but limestone.

Construction on the Lexington Avenue row began in April and was completed with dizzying speed just three months later.  Each house was 16.6 feet wide, with No. 1222 projecting slightly forward.  Stone quoins outlined each building.  Every element of the design was executed in marble--the bracketed sills and lintels, with their faceted keystones; and even the crisp cornice which rose to a central gable.  Here a charming arched opening surmounted a carved plaque that announced the construction date.


Walter Hamilton purchased No. 1220.  The New York Times described him as a "well-known assayer and mineralogist of 20 years' standing."  He operated a substantial ore refinery on 15th Street near the Hudson River which the newspaper said was "complete in every minute particular for the treatment of rebellious gold and silver ores."

Well-to-do dry goods importer Arthur T. Watson and his family moved into No. 1222; while Spencer T. Pratt purchased No. 1224.   A broker, Pratt had moved to Brooklyn by 1889.  His and the other two residences were now being operated as boarding houses.

The quick change-over from elegant private homes to boarding houses may have had to do with the house next door to the house, stretching from No, 1210 to 1218 Lexington Avenue.  In 1882 developers Patrick McQuade and Hyman Sarner laid plans for an apartment building on the northwest corner of 82nd Street and Lexington.  The problem for them was that Joseph Richardson's wife had inherited the odd sliver of land that fronted Lexington.   When the men refused to pay the eccentric millionaire his $5,000 price, he constructed and moved into what became widely known as the Spite House--only five feet deep.


For the most part the boarders in the three marble houses were respectable and drew no unwanted attention.  For years Bertha Stadeker, a teacher in Primary School No. 42 on East 89th Street, lived in No. 1220.  By the time of her resignation in 1894 she was its principal.

On July 22, 1889 Police Headquarters directed officers city-wide to search for Edward S. Brown.  The wealthy 53-year old had been missing from No. 1224 Lexington Avenue more than a week earlier.  Two days after his family, who lived in Philadelphia, initiated the search, The Sun published a description.  It was astoundingly detailed: "5 feet, 3-1/2 inches high, weighing 138 pounds, with dark hair and eyes, heavy brown moustache, prominent nose, high forehead, and dressed in a mixed brown suit, Derby hat, and white shirt with black spots."

A former City employee, Brown had only recently been fired.  The New York Times, on July 24, noted "His disappearance is attributed to his becoming depressed in spirits over being dismissed from his position."  The newspaper also commented on the fact that the other boarders in the house were being uncooperative, saying "the inmates of his late residence refused to give any information concerning him."

The two proprietresses of No. 1222 were duped by a female con artist in 1890.  Mrs. E. G. Hudson was originally from Baltimore where she had married a Methodist Minister, David Hudson, while still in her teens.  She loved to shop and spent more than her husband's salary could pay for.  The Times wrote "The couple lived beyond their means, and in 1874 they were estranged because he objected to his wife's extravagance and suspected that she often obtained money and goods by false pretenses.  He died in 1875 of a broken heart."

The widow set off on a career of swindling and stealing and, when she became well-known in Maryland and then Massachusetts, she moved to New York.   Her many aliases included Mrs. W. H. Heiser and Mrs. Irving, and she invented a string of personal biographies and references to get her into the homes of the wealthy--where she promptly made off with expensive items and apparel.

On June 18, 1890 The Times reported "Last October she induced two ladies to let her a room at 1,222 Lexington Avenue by representing that she was the daughter of Gen. Lee, and giving as reference Bishop Huntington of Syracuse, who repudiated her in a non-committal letter when the ladies wrote to him."

When her landladies discovered her ruse, she was evicted two days after moving in.  She found a job as housekeeper to Mrs. William Oppenheim at No. 19 East 67th Street.  But on June 8 "she was discharged for stealing apparel."

It all ended tragically for Mrs. Hudson.  Called a "'confidence' woman who had many pseudonyms" by The Times, she was found dead in a furnished room at No. 132 East 18th Street on June 17.  The newspaper deemed her "career of petty swindling and stealing" as the cause of her ruin and death.

What looked initially like an accident was more likely a case of suicide.  "She seemed to have fallen over a chair while preparing a glass of lemonade; but as there was a quantity of laudanum in the room and a bottle of the drug that had recently been emptied, it will require an autopsy."

Joseph Richardson died in his Spite House in 1897.  His daughter, Dellaripha Grace, known as Della, retained possession of the three marble houses.  With an eccentric personality equal to her father's, she rarely left her home and hoarded her vast wealth.   She leased each of the boarding houses to individual proprietors year after year--offering only a one-year lease at a time--until her death in 1918.  Her cousin, Anna Richardson (daughter of Joseph's brother, Benjamin), inherited the properties.

In the meantime, they had been marketed as reputable accommodations.  In 1905, for instance, an advertisement for No. 1224 offered "Private residence, elegant large heated rooms, $3 up; respectable gentlemen."

Still owned by Anna Richardson, in 1924 the first floors of the houses were converted to stores, and the second to "offices."  A new two-story brick front extended slightly beyond the facade. 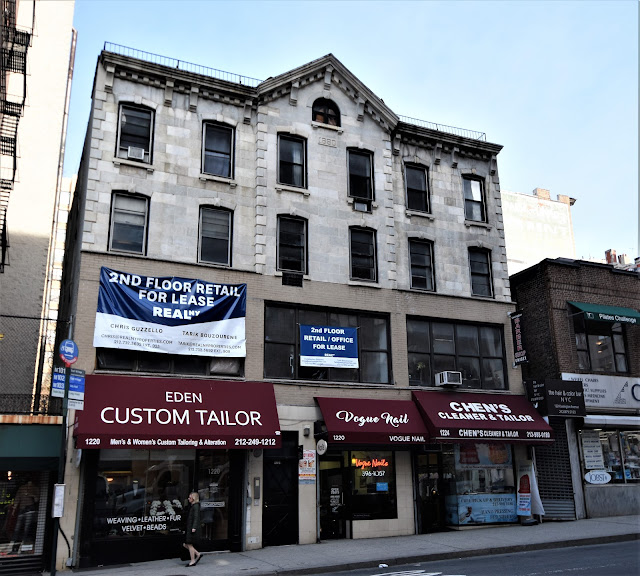 In 1932 the store in No. 1220 was home to Daniel Reeves's grocery store.  On the night of July 27 that year, just as manger John Scarpa was preparing to close, three pistol-wielding robbers burst into the store.  They herded Scarpa and the two clerks, Michael Little and John Sullivan, into a back room, tied them up and covered their mouths with adhesive tape.  They made off with $60 from Scarpa, $5 from Little, and $164 from the cash register.

A police car pursuing the gunmen was involved in a crash at Park Avenue and 76th Street, injuring two officers, and the occupants of the other automobile, Michael Arturi and his 21-year old son Frank.  The robbers got away.


In 1977 the upper floors were converted to apartments, four per floor.  Today the 1924 storefront has been removed and the brick two-story facade replaced.  The upper floors, however, still surprise with their marble cladding--as unexpected today as it was in 1880.