In the first decade following the end of the Civil War, builder Philip Braender got into the speculative development frenzy on the Upper East Side.  By 1892 he would be responsible for more than 1,500 structures here and elsewhere in the city.

In 1884 construction began on No. 7 East 84th Street.  Designed by prolific architect John Brandt, the high-stoop, brownstone house was four stories tall above the English basement.  While its architecture was little different from scores of brownstones rising in the neighborhood, its 25-foot width and interior appointments made it an upscale residence.

Braender sold the completed house to Algernon Sydney Jarvis.  As was customary, the title was put in the name of his wife, Nathalie.  Born in 1810, at the age of 28 Jarvis had been employed by Nathaniel Pearce in his tobacco inspecting business.  Jarvis not only became partners with Pearce, he married his daughter.  The couple would have two daughters, Anna and Helen.

Before then, in 1834, the adventurous young man signed on as supercargo--the representative of a merchant ship's owner responsible for the cargo--on the brig Margaret Oakley.  During that voyage a small uncharted island was discovered off the coast of New South Wales.  It was named Jarvis Island.

By the time the family moved into the 84th Street house, Jarvis was wealthy.  He owned extensive properties, and was a director in the Manhattan Eye and Ear Infirmary, and the American Agricultural Society.

The Jarvis summer estate was in White Plains, New York.  Nathalie and Algernon were there on June 31, 1895 when Algernon died.  The New York Times reported that the cause of the 85-year old's death was "general debility, due to his advanced age."

Nathalie remained in the East 84th Street house, her comings and goings reported in the society columns.  Her substantial fortune was reflected in the sale in 1902 of an entire block of property in Jersey City.  Known as the Old Inspection baseball grounds, she sold it for $60,000--more than $1.7 million today.

In 1906, after she had lived in the house more than two decades, Nathalie recognized that her brownstone house was architecturally outdated.  Like many of her neighbors she laid plans to update.


On November 3 architect Augustus N. Allen filed plans for "extensive alterations."   The renovations would not only strip off the brownstone front and remove the stoop; but add "electric wiring" and remodeled interiors.  The changes would cost Nathalie $35,000--more than $950,000 today.

With the entrance moved to sidewalk level, the mansion was now officially five stories tall.  While neo-Georgian style homes were appearing in the neighborhood--most notably the Andrew Carnegie mansion--Duncan's red brick and limestone design drew inspiration from English Regency structures.  The entrance was centered within the rusticated stone base.  The headers of the Flemish bond brickwork of the mid section were charred to give the illusion of age. 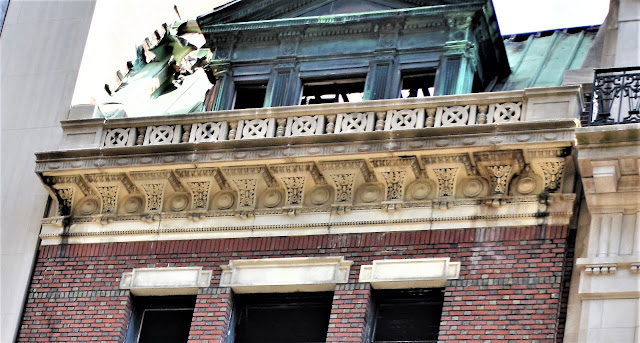 A projecting bay at the third floor rose from stone loggia below.  The bay was decorated with delicate Adam motifs--bowls of fruit, fluted pilasters and sunburst medallions.  The cornice of the bay supported an iron-railed balcony.  The large copper-clad dormer of the fifth floor sat behind a pierced stone railing.  It was supported by an exquisitely-carved and complex cornice.


In February 1909 Nathalie sold the house to Gustav Abraham Wertheim and his wife, the former Lucile Stern.  The couple had been married five years earlier.   Born in Amsterdam to a wealthy banker, he and his brother, Henri, came to America and entered the financial business.

As the moneyed family traveled extensively, they leased the house--in 1913 to Olney B. Mairs, in 1916, to W. B. Duryea, and in 1919 to J. T. Thompson, for instance.   By now the family name had changed.  In 1914 Gustav and Henri petitioned the courts to legally their surnames to include their mother's--van Heukelom.  And so when Gustav sold the house late in July 1919 his name was listed as Gustav Wertheim van Heukelom.

The mansion became the home of its most socially-visible occupants, William K. Dick and his wife the former Madeleine Talmage Force and widow of John Jacob Astor.


Madeleine was five months pregnant when she and Astor headed home from their honeymoon on the RMS Titanic.  Astor and his valet died in the sinking; Madeleine, her maid and nurse survived.

When she married her childhood friend, millionaire William K. Dick, in June 1916 she necessarily relinquished ownership of the massive Astor mansion on Fifth avenue and income from a $5 million trust fund.

The year after the Dicks moved into the 84th Street house it was the scene of an out-of-the-ordinary event: the wedding of Madeleine's sister, Katherine, to Lorillard Spencer.  When and where the ceremony would take place had been the subject of rumors for some time.  It was held in the mansion on December 9, 1922 and The New York Herald pronounced it "one of the notable weddings of the season."  The article noted that Madeleine's "little sons, John Jacob Astor and William Dick, were pages."


After 17 years of marriage Madeleine seems to have gotten a wandering eye.  On Monday, June 5, 1933 The New York Times reported "Mrs. William K. Dick, widow of the late John Jacob Astor, who was lost in the Titanic disaster, left last night for Reno."  The article added "At her home at 7 East Eighty-fourth Street Mrs. Dick's secretary declined to discuss published reports that Mrs. Dick's departure was the first step in a plan to divorce her second husband."

Madeleine obtained her divorced on July 21, 1933 and four months later, on November 27 she married the Italian-born actor and boxer Enzo Fiermonte.  Four years later they divorced.

William remained in the 84th Street house.  It was the scene of the wedding of his brother, Adolph, to Polly Campbell on March 9, 1935.  The marriage did not last.  The couple was divorced in Reno in March 1937 "on the ground of cruelty."

Before long Dick spent less time in the mansion.  In 1941 he leased it to Sir William Wiseman of the banking firm Kuhn, Loeb & Co.  In reporting on the lease The New York Times described the house as "containing twenty-five rooms and seven baths."  Three years later it was leased to Dr. Arthur Rodzinski, conductor of the New York Philharmonic Orchestra.

During World War II the New York Italian Consulate had, obviously, been closed.  On May 6, 1946 it reopened, now in the William Dick mansion.  It remained here until around 1950 when the house became the Hungarian Consulate.  The country paid $18,000 per year rent--equal to about $14,600 per month today.

In December 1951, however, the State Department ordered the closing of Hungarian consulates in response to the imprisonment of four United States pilots forced down over Hungarian territory by Soviet aircraft on November 19.   On December 28 the Hungarian Government, accused of violating the human and diplomatic rights of the American fliers, was given until midnight to close the East 84th Street facility.

The former mansion was subsequently purchased by the Asia Institute for $115,000.  Founded in 1928 to promote research and interest in Persian art and archaeology, it was here only until 1953, the same year that William Dick died.   The house was sold and altered as apartments--one each in lower two floors, and two on the upper stories.

In 2009 the Dick mansion was reconverted to a single family home.  When it was offered for sale in 2013 for $30 million, Robin Finn of The New York Times described it as "an actual mansion."  The house was resold in 2016; but disaster soon struck. 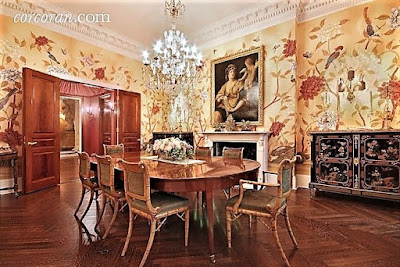 The new owner had filed plans to demolish the interiors and do a "full renovation" at an estimated cost of more than $3 million.  That construction was underway when at around 2:25 a.m. on March 13, 2017 fire broke out.   Three and a half hours later the inferno was under control; but the mansion had been gutted.


The dignified 1906 facade stands before a burned-out shell awaiting the next chapter to unfold.