In 1890 prolific developer William E. D. Stokes teamed with builders Squier & Whipple to construct a row of upscale homes on the north side of 86th Street, between Riverside Drive and West End Avenue, and two others on the south side at Nos. 330 and 332.  Each would be 22-foot wide and rise four stories above a high English basement.

As construction neared completion, a near disaster was averted after fire broke out in No. 330 at around 2:00 on the morning of December 10, 1889.  In reporting that no significant damage incurred, The Sun got the contractor's name woefully wrong, calling it "Squire & Wempler's building."

Two months later Stokes sold No. 330, described by The Real Estate Record & Builders' Guide as a "four-story high stoop and Tiffany brick and brown stone residence."  The $46,500 Victor Erbacher paid would be equal to about $1.25 million today.

Born in Vienna, Erbacher was the senior member of the "dress goods" firm of Erbacher & Byram.  He and his wife, the former Lavinia Alexander, who went by her middle name Anna, moved into a visually pleasing, if architecturally confusing, new home.  Upper West Side domestic architecture in the 1890s routinely mixed and matched historic styles and the Erbacher house was by no means an exception. 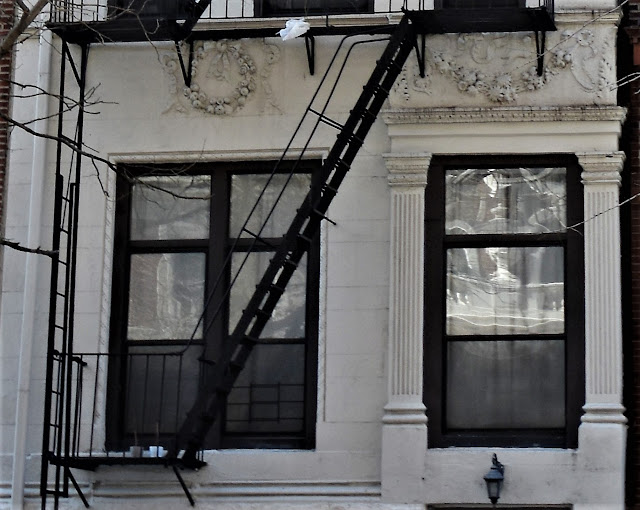 The entrance above the basement of rough-cut brownstone blocks echoed the Greek Revival doorways of the 1850s.  The brownstone-clad parlor level, decorated with neo-Classical motifs above the doorway and window, gave way to three stories of light-colored brick.  Here Renaissance-inspired panels separated the floors.  The marriage of styles culminated in a Flemish Renaissance Revival gable with an elaborate terra cotta tympanum and spiky finials which fronted a pyramidal attic roof.

The Erbachers had an infant son, Herbert, born just months before they moved in.  Highly visible in society, their movements carefully documented by the press.  The year following their purchase of the house, for instance, The New York Times mentioned that they were passengers on the steamship La Champagne headed for Cherbourg.  Other passengers, the article noted, were Countess A. de Diesbach, and Count and Countess Roffignac.


Anna opened the 86th Street house on February 3, 1896 to aid the Riverside Day Nursery.  The two-day "sale of fancy articles" went on despite unfortunate weather; The Times noting "Several beautifully decorated tables stood in the large parlors, and were covered with hundreds of fancy articles, including embroideries and ornamented cakes."

At the close of the sale The Journal announced it was a financial success.  The newspaper listed the efforts of each volunteer, saying in part that "The cake table was in charge of Louise Stanford and Madeline Whele...Miss Juliet Clouse had charge of the flower booth...[and] Miss Elsa Whele had charge of the ring cake, and Master Dorrie McIndoe held sway over the mysterious grab bag."

On July 13, 1903, shortly after the Erbachers completed their handsome summer home in Monmouth Hills, New Jersey, Victor suffered a fatal heart attack.  Interestingly, Anna chose not to hold his funeral in the 86th Street house, as might have been expected; but at the Collegiate Reformed Church on 77th Street and West End Avenue.

The exact amount of his estate is unclear; however young Herbert inherited what one newspaper reported was "upward of a million dollars."

Before long Anna moved to the hulking apartment building at the southeast corner of Riverside Drive and 95th Street.  But tragedy followed her.

In the summer of 1907 Anna and Herbert, now 18 years old, were at the country house.  On Saturday July 27 Herbert took the wheel of their touring car to take his mother and four other female passengers, including a 12-year old girl, for a ride.  Two miles outside the exclusive estate district of Bernardsville, Herbert turned onto the private drive of former senator Samuel S. Childs.  The Amsterdam Evening Recorder noted that the road "is unusually treacherous to automobilists on account of the many windings and high embankments, and is generally avoided by them."

At one point in the hairpin turn Herbert slammed on the brakes.  "They didn't have time to work before the car was bottom side up on the rocks fifteen feet below," wrote the newspaper.  While the women were relatively unharmed, the teen-aged driver was killed instantly.  "His skull was crushed and one arm and several ribs were broken and he was burned and scalded about the body."

In the meantime J. L. Thompson was living in the 86th Street house.  He was best known for his sporting ways and owned valuable thoroughbred race horses.  In 1908 he was a competitor in the Spalding annual Lawn Tennis Competition.

Prior to World War I, however, H. J. Finley had purchased both of the 1891 residences and operated them as rooming houses.  In April 1918 he sold both.  Florence Cohen purchased No. 330 and immediately hired architect Samuel Cohen to draw up plans to convert it to bachelor apartments.  His plans, filed in May, estimated the costs at $6,500.

The renovations resulted in the removal of the brownstone stoop and the entrance being dropped to street level.  A large window was cut into the former basement wall.  There were now two apartments per floor.

While Florence had anticipated a bachelor apartment, she accepted female tenants as well.  One of them was Virginia Venovens who arrived from Russia in 1919.  Like many innocent newcomers, Virginia met a man who would be her undoing.  He told her that he lived on Fifth Avenue and was worth $25 million.  And that he was in love with her.

Virginia fell in love as well.  But toward the end of 1921 "his affection for her cooled."  Jilted, the now 21-year old was devastated.  On the night of February 4, 1922 a maid saw her stagger into the hallway from her room and heard her say "I want to die."

The hopeless immigrant had swallowed iodine in her room.  The maid ran onto the street and called out for Patrolman McDonald, who summoned a doctor.

"After being treated she refused to go to the hospital, and declared she had no friends and would make another attempt to drink the poison," reported The New York Herald.  She was taken away to a private hospital.

The name of another tenant, 50-year old John Ford, ended up in the newspapers when he was arrested and accused of stealing 500 shares of capital stock.  The amount of his bail, $5,000 (more than $67,000 today), suggests the gravity of the crime.

The $20 deposit demanded by the owners for an apartment in 1930 was a significant amount in the Depression years.  John G. Medlock earned $30 a week as a bookkeeper; but by sharing an apartment with another couple, he thought his family could afford the rent here.

Medlock had married his wife when she was just 13 years old.  They had a six-year old son, Neil.   On Wednesday, July 8, 1930 while her husband was at work, Mrs. Medlock delivered the $20 deposit to the building superintendent, James Findlay.  "On Friday, however, her husband lost his position, and they found themselves in a desperate situation," reported The New York Times.

The 21-year old woman rushed back to No. 330 West 86th Street and requested her deposit back.  Findlay told her that deposits were non-refundable.  After pleaded her case in the West Side Court on July 7, she collapsed and had to be assisted out of the courtroom.  Findlay testified he was sorry but was simply obeying the rules.

Residents came and went throughout the decades, like Rose Raymond who taught piano here in the 1950s.  In the meantime the private homes of the block were demolished and replaced with modern apartment buildings until No. 330 was tightly viced between two of them.  Its mere 20-foot width would seem to make it unusable to developers.

In 1999 the city had taken possession of what journalist Alex Mindlin called "a decrepit, century-old brownstone at 330 West 86th Street, flanked by 15-story towers."  Under a state law meant to encourage the rehabilitation of "slum or blighted" buildings, the city sold the house to a group of tenants for $340,000.  The conditions of the bargain price were that they would renovate the building.

Instead, two years later, they jumped at the $2.25 million offered by Darkhorse Development which announced plans for a 17-story glass-and-brick residential building.  While the sellers were not put off by the concept, the neighbors were.  A law suit was initiated that dragged on for eleven years.

One of the development firm's owners, Robert Ricciardelli, told Mindlin, "We're not doing anything crazy.  We have plans to basically fill in the skyline on that lot."


Finally, in April 2010 the courts ruled in favor of Darkhorse Development, as long as the replacement building would have no more than four apartment units.  Ricciardelli spoke out again, saying the city had been "stubborn and illogical" and estimating his legal costs at about half a million dollars.

Nevertheless he was optimistic about the future, despite the restriction on the number of units.  "It sounds like something very interesting, like a townhouse in the sky," he said.

Darkhorse Development obviously rethought the townhouse in the sky idea, however.   In 2013 it put the building on the market on an "as is, where-is basis" saying the property "is ideal for an owner occupant, conversion to a single family, or as a luxury rental."

The 1891 contrast of materials and colors has been obscured by a slathering of cream-colored paint, with the the terra cotta and stone of the gable picked out in chocolate brown, giving it a sort of neo-Tudor effect.  The delightful and disrespected holdout begs for a sympathetic touch.