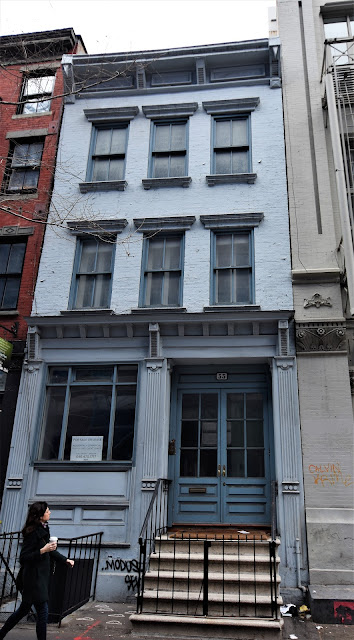 When Samuel Dobbin erected his 18-foot wide house at No. 53 Wooster Street (just off the southwest corner of Broome Street) around 1825 the neighborhood was filling with similar middle class homes.  Faced in brick, it was two and a half stories tall; its peaked roof was no doubt punctured by one or two dormers.   Although a relatively modest home, it boasted extras like a marble stoop and, most likely, marble trim.

By 1842 James B. Phillips lived in the house.  That year on June 25 he and several other businessmen were given a demonstration of Warren's Patent Improved Horse Power and Threshing Machine.  He was duly impressed and added his name to the list of those endorsing it as one of "the most perfect inventions of the character, that have ever fallen under their observation."

Phillips and his family may have been the last respectable occupants of No. 53 Wooster Street.  In the decade prior to the outbreak of Civil War Greene Street, one block to the east, became the center of Manhattan's red light district.  It spread west to the Wooster Street address by 1857.

Just as it is today, prostitution in 1850s could be a dangerous business.  Francis Timbrook was a ruffian who left Harriet Rue battered in the summer of 1857.  When he faced Judge Osborne on assault charges on August 3, Harriet failed to appear.  Osborne may have held typical Victorian views against prostitutes; but he apparently had similar views about thugs.  Just as the bailiffs were prepared to release Timbook, the judge stepped in.

"Hold on," he ordered.  "It would be too bad to let him go.  It seems he broke her nose.  Remand the prisoner."

If Harriet Rue was still working in the house a year later, she found herself behind bars.  On September 6, 1858 The New York Times ran the headline: Disorderly Houses Broken Up.  The article noted that on Saturday night, two days earlier, "Captain Turnbull, of the Eighth Ward, made a descent on No. 53 Wooster-street, and had all the inmates locked up and committed to answer."

The house was still being run as a brothel in 1865.  Philip H. Hart was visiting the city in June that year from his home in Elmira, New York, when he dropped into No. 53 Wooster.   Like so many bordello patrons, he soon discovered that the women made their money not only through prostitution, but through theft.  It seems Anne Reid ran the house, and while her clients were undressed and preoccupied, she went through their clothing.

Most victims accepted their losses, unwilling to face the shame and publicity.  Perhaps because he was from out of town and essentially unknown, Hart went to the police.  Anne Reid was arrested on Hart's charges "that while he was at her abode with another female she picked his pockets, taking $30 therefrom."

By the time of her arrest, the district that would become known as Soho was becoming commercialized.  Loft buildings would quickly replace the modest brick or wooden houses.  But the owner of No. 53 Wooster Street took a less ambitious, less expensive route.

In 1870 the attic floor was extended to full height, a cast iron storefront was installed, and the openings updated with attractive cornices and bracketed sills.  The simple shop front was distinguished by fluted pilasters with stylized capitals.  Its neo-Grec style cornice was mimicked at the roof line.


Apparently the upper floors were rented to roomers.  On October 21, 1874 F. Emrurd placed an advertisement in The New York Herald:  "A young Frenchman wishes a situation in a hotel; speaks English."  When he apparently had no offers after more than two months, his ad sounded a bit desperate.  On December 1 it read:  "Situation Wanted--By a Frenchman (speaks some English); not afraid of any kind of work; strictly honest; can be useful anywhere he may be placed."

In the meantime the store space was being rented by D. Muller for his sewing machine shop.  But by 1880 Andrew Soria's dye shop was in the building.  Founded as J. Soria & Co. before 1859 it described itself as a "French dyeing establishment."

The company remained in the Wooster Street building until the mid 1880s when it moved to Commerce Street.  In its place was Kingsberg & Strauss's "Globe Manufacturing Co."  Despite its name, the firm had nothing to do either with manufacturing nor globes.  It was a commercial printing firm.

Globe Manufacturing was gone by 1894.  American Packing Co. moved in by that year, sellers of
"American lubricating compound, boiler cleaning compound, and metal polishing paste."  The company's logo featured a rooster and the tag line "While I Live I'll Crow."

Monahan toyed with replacing what the New-York Tribune called "an old three story store and loft building."  He went so far as to hire architect and builder John A. Dooner to design and file plans for a "7-story brick storage building" on the site in November 1902.

The plans obviously fizzled and in 1905 he sold the building to William H. Klinker.  The building finally found a long-term tenant in the United Steel Frame Co., makers of suit case frames.  When the company was taken over by suit case manufacturer U. Prever in 1911, Luggage and Leather Goods announced it would keep the old name and remain on Wooster Street.  Prever first made changes to the factory space  "He has improved and increased the facilities for turning out first class goods and can handle all orders to the satisfaction of the trade," said the article.

United Steel Frame Co. was still here in 1920 was offered for sale.  An advertisement in The Sun offered a "Three-story substantial business building...Price $18,000."  The relative price had fallen by half since it sold in 1897.

The following year United Steel Frame built a new building in Brooklyn.  Plymouth Marine Contractors had been leasing the building in 1945 when it purchased it from the estate of Thomas E. Crimmins in an all-cash deal.  The firm, which listed itself merely as "painting," remained here until 1950 when it sold the property for $22,500.

As the last quarter of the century approached, Soho would see a drastic transformation to Manhattan's center of the arts.  In 1971 Trisha Brown's performance work "Roof Piece" included No. 53 Wooster Street.  A troupe of dancers were stationed on roof tops from this building to No. 381 Lafayette Street; each mimicking the others' choreographed movements.

Within a few years the store space where 1871 sewing machines were displayed had become an art gallery; and by 1992 was home to Giuliano Bugialli's "Cooking School in Florence."  Today the second floor is a "loft apartment," and the third is living/work space.  Throughout the district's stark changes and the building's many industrial tenants, the utterly charming storefront is little altered--including the wonderful 19th century doors. 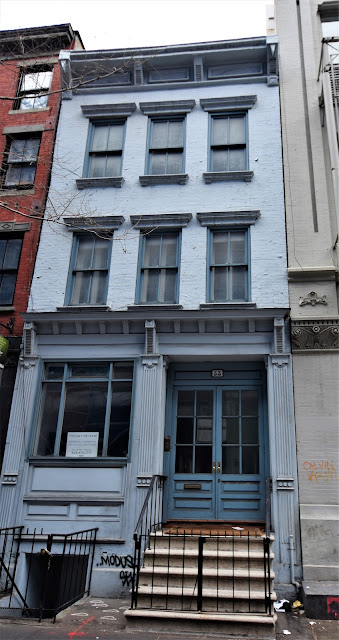 The little building that struggled with property values in the early 20th century was offered for $12.3 million in 2016.