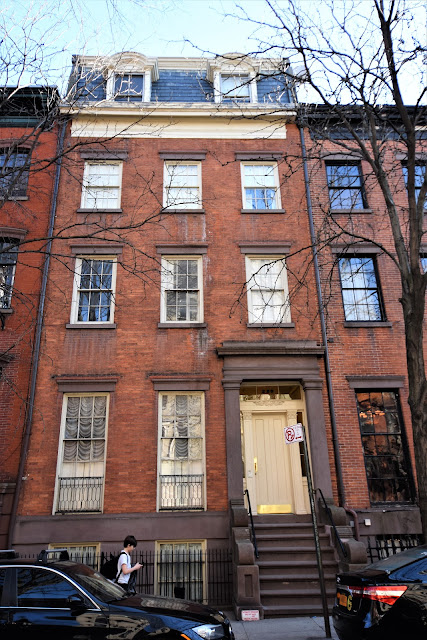 By 1838 Greenwich Village had transformed from the sleepy hamlet of a generation earlier to a rapidly-expanding northern suburb.  That year two matching Greek Revival homes were completed at Nos. 60 and 62 Hammond Street, between Waverly Place and West 4th Street.

The 25-foot wide residences reflected the social and financial status of their occupants.  No. 60 was constructed for jurist Ambrose Kirtland.  Like its neighbor, the red brick house was three stories tall above a brownstone basement.  Most of the architectural elements were expected in the style--the dignified stone pilasters that supported the heavy entablature above the doorway, the fine recessed entrance with transom and sidelights, and the simple wooden fascia board below the cornice, for instance.  What made the design stand out was the treatment of the stoops.  Instead of iron railings, stepped stone wing walls flanked the stairs; their lines softened by large, waterfalling volutes.

Kirtland was 35 years old when he and his family moved into the house.  Both he and his wife, Charlotte, the daughter of General Richard McCarty, had three children.  Frances, known as Fannie, was born in 1819 before the newlyweds moved to New York City from Coxsackie, upstate.  There was also 16 year old Elizabeth and 6-year old Charlotte.   By the end of the year son Richard was born in the house.

Kirkland was well-known and was often referred to in newspapers only as Judge Kirtland.  But at least one reader of the Morning Herald questioned his ability in 1840.  He wrote on March 4 "Judge A. Kirtland, of the Second Ward Court, has decided that both myself and my clerk are liable for the same contract.  A full report will be given tomorrow of this extraordinary decision.  Can such a man be fit for any such office?"  Nevertheless, he was reappointed Assistant Justice in 1844.

The household was reduced by one on April 16, 1846 when Elizabeth was married to Theodore Cozzens; and again on June 27, 1848 when Fannie married Major General Nathaniel Michler.  The groom was a member of the U.S. Army's Topographical Corps of Engineers.

Following Ambrose Kirtland's death on November 27, 1850 Charlotte left West 11th Street to move in with Fannie and General Michler at No. 141 8th Street.  Her former home was sold at auction on November 19, 1852.  The announcement described it as "The genteel three story brick house...known as No. 60 Hammond street."  It was purchased by Harvey Barmore and his wife, the former Maria Garrison.
The couple had seven children.  Barmore and his brother Garrit were partners in the piano making firm of G. & H. Barmore, founded in 1836.  They had received a diploma for "a piano-forte of a very fine touch" at the American Institute Fair that year.  The Barmore shop was at No. 368 Bleecker Street.

On March 17, 1860 Frank Barmore died "suddenly."  The boy was just 4-years old.  A much happier event occured the following year when Catherine Amelia, the Barmores' eldest daughter, was married to Alfred W. Lowerre on October 6, 1861.
The family moved to Eighth Avenue shortly afterward and the 11th Street house became home to another piano maker, William Robertson.
The house received a new address in 1864 when Hamond Street was renamed.  The street number was now 226 West 11th Street.
On April 25, 1868 the Real Estate Record & Builders' Guide cautioned architects and builders about the over-use of an overwhelmingly popular architectural fashion, the mansard roof.  "Every new idea--from the facing of our houses with hideous brown stone, to crowning our ladies with still more hideous sacks of horsehair--is followed with the utmost avidity, until the thing becomes so overdone that sheer nausea begets a change."

The article conceded that the mansard was, in many cases, a perfect solution to increase the square footage of a structure by adding a full floor.  "Properly introduced and treated, this mode of terminating our buildings is exceedingly beautiful and picturesque."  But the writer stressed that too often proportions were upset or the "lightness and airiness" of the design were upset.

It was around the time of the article that a mansard was added to No. 226.   The Record & Guide could breathe easily; for the architect deftly designed the addition to compliment the house.  The alteration was apparently about the additional space rather than updating; for the other details of the architecture were preserved. 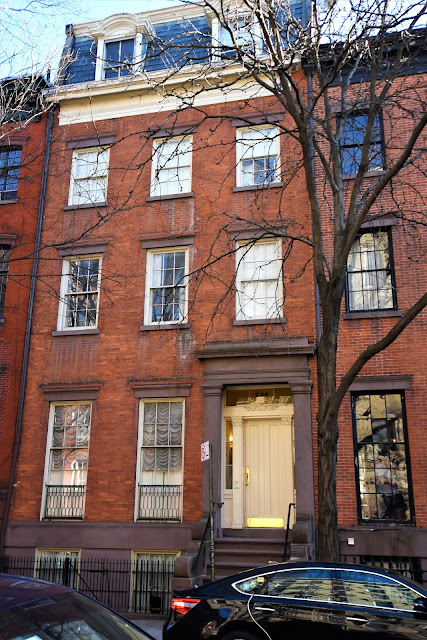 The Rowe family was leasing the house from wealthy businessman and real estate investor Robert Hoe by the mid 1890s.  At the time the nation was obsessed with the bicycling fad.  Julia Rowe was 16 years old on April 25, 1897 when she left home on her bike.  She was headed far north to the house of her uncle, John T. Clokey, at No. 726 East 140th Street in the Bronx.  Clokey was also out on his bicycle that morning.  He returned to the house around 8:00 for breakfast about the time that Julia arrived.

Julia had breakfast with the Clokey family, then headed back home around 10:00.  Her uncle offered to ride with her to the Harlem Bridge (later renamed the Third Avenue Bridge).   Julia was about a block ahead when she reached Alexander Avenue; so she stopped to let Clokey catch up.

Looking backward, "she saw a crowd that had been attracted by a man who had fallen from his bicycle, and on reaching the spot she recognized the man as her uncle," reported The New York Times the following day.  He told Julia he was fine, and that he had suddenly become dizzy and fallen from his bicycle.  But only a few moments later he passed out.  Before an ambulance would arrive the 43-year old was dead.


R. J. Rockwell lived in the house in 1901.  Two years later the Hoe Estate sold it to Daniel S. Rosenbaum.  He and his wife, Ida, purchased other houses on the block; including Nos. 228 and 230.  When the couple sold the three houses in 1921 they were still private homes.  But the first years of the Great Depression would see rented rooms in No. 226.

Among the residents here in 1936 was 28-year old Helen Crowe.  The unmarried woman was employed by the Works Progress Administration to do research work in the American Museum of Natural History.  One might assume that given that tenuous employment climate researchers lucky enough to land a Government-sponsored job would be cautious about making waves.  Helen Crowe felt otherwise.

When 22 staffers were transferred to other projects in the city, she and other researchers were outraged, charging that the transfers were "arbitrary."  At 1:00 on February 5 she joined a picket line that marched in circles in front of the 77th Street entrance to the museum.

When police tried to divert the placard-carrying protestors away from the steps so visitors could enter, the group got loud.  "Although they were thus prevented from exhibiting their placards they were not restricted vocally," reported The Times, "and cries of 'We demand the right to picket,' and 'We demand recognition,' brought a crowd of about 200 persons to the scene."

Helen Crowe ended up in a paddy wagon along with nine other women and 10 men.  She was charged with disorderly conduct.

The following year city officials finally discovered that No. 226 West 11th Street was being operated as rented rooms.  The owner was fined for the "multiple dwelling violation."

A proper conversion was completed in 1958 which resulted in two apartments in the basement level, one on the parlor floor, and two each on the upper stories.   Later, in 1980, the basement and parlor floors were combined into a spacious duplex apartment.

Through it all little has changed to the outward appearance of the house since the mansard was added.