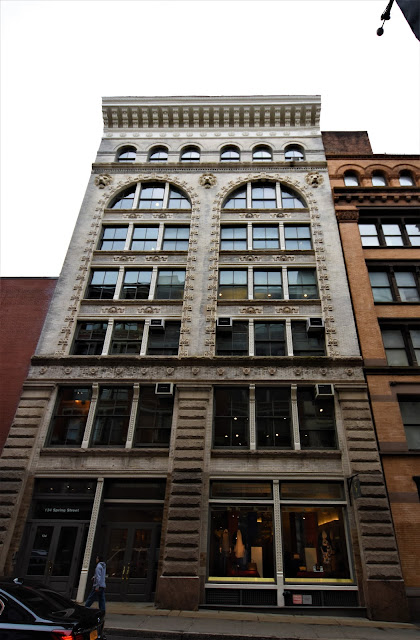 In October 1894 architect and developer Albert Wagner purchased the "old buildings" at Nos. 134 and 136 Spring Street, and at Nos. 84 through 88 Wooster Street.  The properties, which formed an L, cost Wagner nearly $200,000; and the Real Estate Record & Guide predicted he "will improve the property at an early date by the erection of a seven or ten-story semi-fire-proof business structure."


The Wooster Street elevation was slightly less grand, with alternating brick and stone layers replacing the hefty base piers, and with the terra cotta embellishments pulled back to rosettes tracing the fifth and sixth floor openings, smaller versions of the lions' heads serving as brackets, and decorative cast iron masonry supports adding interest to the piers at the third floor.

Even as the building was being constructed tenants began lining up.  On June 14 Franklin & Mirsky leased the third, fourth and seventh floors at an annual rental of $10,000 (about $24,250 per month today).   The firm, which had been operating from nearby on Greene Street, manufactured wrappers and tea gowns--the ornate dressing gowns made to be worn over petticoats.  Tailor to fit like a dress, women arising in the morning might even wear them to the breakfast table without risking her respectability.


Within the week B. Doulton took the second floor and B. Steinberg & Co. rented the fifth and sixth.  That firm made ladies underwear.  The New York Times remarked "The building is now being erected by Albert Wagner, and is thoroughly rented months in advance of its completion."

By the time the building was completed on May 27, 1896 Wagner had sold it.   Its three tenants all manufactured apparel.   Franklin & Mirsky employed 15 men, 17 women and 8 girls under 21 years old.  The male and female workers most likely worked on separate floors.  The firm reported to the State that in 1896 its teen-aged employees worked a 60-hour work week.

It would not be long before Franklin & Mirsky felt the effects of the dawning laborer rights movement.  The Annual Report of the State's Mediation and Arbitration Board for 1899 noted "On February 10th, 15 garment cutters employed at the shop of Franklin & Mirsky, 134 Spring street, New York city, went on strike because of the discharge of one of their number for an infraction of the shop rules, which they considered too trivial to warrant the discharge."

The very concept of workers challenging the autocratic decisions of management would have been unthinkable a generation earlier.  Now the factory workers held sway.  "They remained out a week, when the matter was adjusted satisfactorily to all and they returned to work." 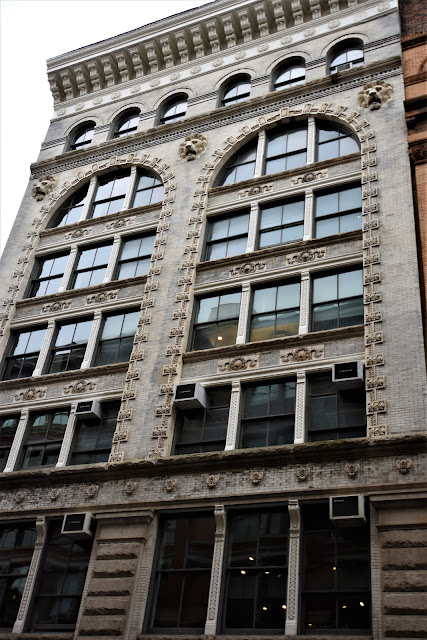 By the turn of the century M. L. Getten & Bros. was manufacturing its "Guarantee" brand skirts here.  The high-end "dress and walking skirts," sold at emporiums like Siegel-Cooper, retailed for up to $15 in 1905--more than $400 in today's dollars.  A description of a Voile Dress Skirt in January that year helped explain the high price.  "Silk lined and trimmed with tailor stitched taffeta and peau de soie strapping in new designs.  These skirts of taffeta silk drops finished with a dust ruffle."

Although also involved in the textile industry, William M. Poz was not involved in clothing.  Instead he focused on the rapidly emerging automobile industry.  Many of the vehicles required cloth roofs which could be folded down in good weather.  Poz acted as sales agent for fabrics designed specifically for that purpose.

In June 1908 the Automobile Trade Journal announced "Wm. M. Poz, 134-136 Spring street, New York, sole agent for the well-known 'Rubba-silk' is now offering a new fabric known as 'Lohengrin,' which is composed of all silk in the fabric, and is coated with the best Para gum.  It is a most serviceable fabric, and beings being rich in appearance as well as very strong and durable, it is also water repellent."


Poz tantalized manufacturers by promising that in the Spring of 1909 he would be "getting out a new cloth, called the 'Cloth of Gold."  This fabric, he said, "is also silk [and] is water-proof and water repellent."

In the meantime, cloak makers Philip and Max Weinstein were also dealing with the labor problems.  A Weinstein Brothers employee, Harry Briskman, tried to unionize the factory in the spring of 1907; but one employee went to felonious lengths.

Thirteen factory workers were arrested and appeared before Magistrate Sweetser in Jefferson Market Court on March 28.  All but Philip Hanken were released "with warnings."  But Hanken had gone too far.  He was charged "with trying to cripple the firm's business by removing three clamps from machinery." He was held for trial on $1,000 bail.

The loft building that the Record & Guide had described as "semi-fire-proof" received a forward-thinking improvement in January 1909.  Two years before the devastating Triangle Shirtwaist fire that claimed the lives of 146 garment workers, the New-York Tribune reported that plans had been filed "for equipping the seven story loft building at Nos. 134 and 136 Spring street with an auxiliary fire extinguisher sprinkler plant."

The sprinklers no doubt eased concerns of workers; but conditions in apparel shops continued to border on intolerable.  On November 23 that year The Sun reported that a general strike of 40,000 shirtwaist makers had been ordered by the union.  Among the first to walk off the job were the 200 employees of Joseph Rosenberg & Co. in the Spring Street building.

By the spring of 1910 things had returned to normal in Joseph Rosenberg & Co.'s shirt factory.  But tragedy occurred on May 20 when 17-year old Charles Kessler was ordered to repair several leaky fire buckets.  The teen was apparently not well-versed in soldering.  In an attempt to thin the molten lead he poured water into the crucible.  The explosive reaction sent boiling water and searing lead into the boy's face.

The New-York Tribune reported he "was severely burned about the face and hands.  His screams of pain frightened the two hundred girls in the factory, and they made a rush for the street."

Two years later, on April 27, 1912, Gertrude Huberman was carrying cash, possibly payroll, belonging to Joseph Rosenberg & Co.  Near the corner of Broadway and 12th Street, she was attacked by Henry Kirschner.  The 23-year old attempted to wrest the package containing $319 from her.

Gertrude's white knight did not charge in on a stallion, but in a delivery truck.  James Clinton saw the assault, jumped from his truck and, according to The Sun, "gave him a beating."  Kirschner was arrested and Gertrude filed a complaint of assault and robbery.  The Sun reported that when he appeared before Magistrate Barlow "a pair of black eyes and a pleas of not guilty adorned [his] face."

Kirschner's alibi was that he was simply trying to be a gentleman when he saw Gertrude drop the package.  He told the judge that "he saw the young woman stooping down with the bag some distance away from her."  Just then, he said, Clinton "pounced upon him" and beat him up.

The judge not only did not believe the defense, he found it highly amusing.  "Magistrate Barlow after laughing at his story held Kirschner without bail for the Grand Jury."

Weinstein Brothers was still in the building at the time, now described by one journal as "one of the largest manufacturers of cloaks and suits."  That year it employed 150 men, 50 women, and four office staff.

A new elevator operator was hired on August 14.  Veteran operator Joseph Rossi started training the young man, and soon he was doing well enough to try it himself.  But the novice pushed the lever "so hard that the cable flew off the drum."  The elevator began shooting "upward at express speed," according to The Evening World.

Rossi timed his escape and when the runaway car reached the fifth floor he leaped through the open doors.  Panicked, the new employee tried to follow; but the elapsed seconds proved fatal.  His body was caught between the car roof and the fifth floor.  The Evening World reported "His cries caused a panic among the 200 girls in a waist factory and they broke for the exits, thinking a fire had started."

A doctor arrived only minutes after the accident.  He found the man alive, but pinned between the elevator and the wall of the fifth floor.  There was no way to extricate him.  Two hours later firemen were called.  The World reported "Hook and Ladder Company No. 20 cut out a section of the wall to rescue him, but the victim, whose name could not be learned, was dead."  The young man had been employed only two hours before he died.

Apparel companies were still in the building in 1920.  That year the textile firm of Weinberg & Halperin was burglarized.  The New York Times reported on March 28 that the thieves "cut their way into the rooms of Weinberg & Walperin...They avoided burglar alarm wires and stole $9000 worth of silk."

But the garment district was already migrating north of 34th Street.  By mid century a new type of tenant had filled the building.  Advertising specialists Dan Newman Company took space in 1956; and wholesale paper dealers Elkins Company, Inc. was here in the early 1960s.

As the Soho district transformed to an arts center, the Spring Street building became home to the Persicol Gallery in 1980, and within a few years Downtown, dealers in vintage American furniture from the 1930s, operated from street level.  Later in the decade Jaap Rietman, a specialty bookstore devoted to art books, opened here.

Albert Wagner's elaborate sheet metal cornice had, by now, suffered severe deterioration.  At one point it had to be wrapped to prevent pieces from falling to the sidewalk below.  Architect Shael Shapiro was commissioned to restore the cornice and make other repairs which cost the owners about $750,000. 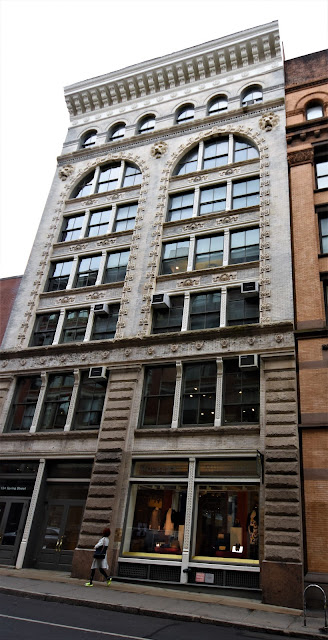 Today the lofts where hundreds of young women worked over sewing machines in nearly insufferable conditions have been converted to modern office space and upscale shops operate from street level.  Wagner's aggressive and handsome design, however, is little changed other than expected modernization like the replacement windows.