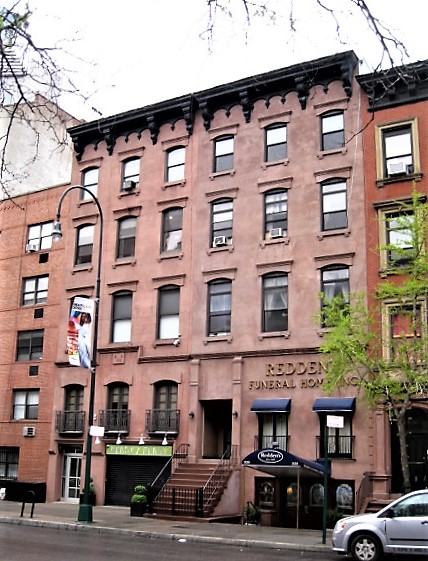 James C. Hoe was just two years old when his family left Leicestershire, England, for New York in 1815.  His father, William, started business as a builder that year.  The family lived at No. 10 Liberty Place, then known as Little Greene Street.  On August 6, 1822 Alfred Clarke Hoe was born.

James was placed in "the common school," but his ambitions put an end to his formal education early on.  The Sun later explained "he entered his father's office at an early age, and obtained a practical knowledge of everything pertaining to the building business."  At the age of 27 William took James as a partner, changing the name of the firm to William Hoe & Son.

By 1849, the year William died, James's brother Richard was working in the firm, which became Richard & James C. Hoe.  Alfred was soon a member, as well.  Following Richard's death in 1865, the name was once again changed, this time to James C. Hoe & Co. (despite the fact that Alfred was a co-partner).

At the time handsome brick and brownstone residences had risen along West 14th Street for more than a decade.  In 1851 two matching mansions were completed at Nos. 325 and 327, between Eighth and Ninth Avenues.   At 25 feet wide and four stories tall above the basement level, they were intended for wealthy occupants.

Italianate in style, they stepped away from the expected with decorative corbels between the foliate cornice brackets that smacked of Gothic Revival. The interesting stone eyebrows over the openings were exaggerated at the parlor level, where they dripped down along the sides, again suggesting Gothic.  The floor-to-ceiling windows opened onto full-width, sturdy iron balconies.

James had married Temperance Mulford Miller in 1837 and the couple had four children, William, Isabel, George, and John.  Alfred married Mary Frances Lyon on August 26, 1849, the same year his father died.  The couple already had four daughters--Mary Frances, Emma, Anna and Amelia--when the family's population was increased by three in July 1862.  The triplets were names Ella, George and William James.

Brothers James and Alfred were highly respected in the building business.  They were responsible for notable buildings like the McCreery Dry Goods store, the A. T. Stewart emporium, Tiffany's impressive store at No. 550 Broadway, and Niblo's Theatre.  Alfred's construction expertise led to his being called upon to testify in the investigation as to the causes of the deadly partial collapse of Madison Square Garden of April 21, 1880.  In at least one instance Alfred was credited with being the architect of a James C. Hoe & Co. building, at No. 8 East 14th Street.


Both James and Alfred were members of the General Society of Mechanics and Tradesmen, a highly-respected group of professionals.  For years Alfred served as treasurer of its Literary and Scientific Committee.  He was also a member of the Board of Education for decades.

All wealthy New York families escaped the stifling city heat in fashionable resorts or country homes.  But while the rest of the family enjoyed their leisure, business had to be dealt with.  The head of the household spent most of his summers in the city, sometimes sleeping at his club, and traveling to the country on weekends.

James purchased a summer estate in East Moriches, Long Island.  The family was already there on June 23, 1880 when he left the city to join his family.  He intended to stay an entire week.

A bizarre incident turned the vacation to tragedy.  "While there he became lame in consequence of a misfitting shoe, and gangrene set in," reported The Sun on September 14.  "The poison entered the blood and killed him."  Hoe was 66 years old.  The newspaper added, "He was tall and stout, with a clean-shaven, ruddy face, and pleasant features."

James Hoe's body was returned to the 14th Street mansion and his funeral was held in the Church of the New Jerusalem, at No. 114 East 35th Street, which his firm had built.  His brother, Alfred, died on December 13, 1887.

James's sons, William and George, had joined the firm by now.  In 1885 George had followed in his uncle's footsteps by being appointed a Trustee of Common Schools for the 16th Ward.   Their cousins next door, William and Alfred, were also builders in the family business.

The two widows remained on in their homes.  On November 17, 1894 Temperance, now 78 years old, died suddenly in No. 325.  Her funeral was held in the house three days later.   The heirs retained possession, but by 1900 were leasing it.  That year Ida W. Hubbell, the soprano soloist at St. Mary's Church, lived here.  She offered voice coaching lessons, noting "a limited number of pupils taken."

In 1903 the family leased No. 325 to Dr. Leroy B. Sherman.  The wealthy physician was also vice president and a director of the Bunker Hill Mining & Smelting Co.   A graduate of the New York Homeopathic Medical College in 1889, he was married to the former Fannie E. Franklin.  The couple had three grown children.

Sherman was called to a heart-breaking scene in June 1910.   George F. Catlett was 22 years old and the chief chemist of the Western Electric Company.  He and his 24-year old wife had a two-month old baby girl, Jeannie.  Catlett's brother-in-law, Thomas Hodgson, lived with the couple in their apartment at No 337 West 14th Street.  He had arrived in Manhattan from Virginia about the time of the child's birth to become Catlett's laboratory assistant.

The young mother suffered from what today would be recognized as postpartum depression.  The New York Times noted "Ever since the birth of the baby Mrs. Catlett had been under treatment for nervousness."  On June 30 the two men came home to find both mother and baby dead.

Dr. Sherman was called in, but it was too late.  Mrs. Catlett had given her baby cyanide, then drank it herself.   Sherman reported "the potion she had prepared was enough to kill twenty persons."

After leasing the house to Sherman for 18 years, the family finally sold it to him in 1921.   He continued practicing medicine until his death on June 15, 1932.  The New York Times wrote "Chelsea has lost one of its most familiar figures in the death...of Dr. Leroy B. Sherman, 72 years old, of 325 West Fourteenth Street.  A 'family practitioner' of the old school, Dr. Sherman had practiced in the Fourteenth Street area for the last forty-three years and had lived at his last address for twenty-three years."

In the meantime, Mary and several of her children had lived on in No. 327 following Alfred's death.  Ella, the youngest daughter, died on December 5, 1901.  Her funeral was held in the house two days later.

When Mary Frances Hoe died in the house at the age of 90 on October 23, 1918, at least three of her children were still living there--Alfred, William and Annie.  Annie, who never married, would be the last of the family to stay on.  She died in the house on August 11, 1943 at the age of 87.  Hers would be the last family funeral held in the old mansion.

The James C. Hoe house had become Reddin's Funeral Home by 1947.  In 1958 a conversion resulted in a "smoking room" and chapel in the basement level, two chapels on the parlor floor, and residential space above--a single apartment on the second floor and rented rooms on the upper stories.

While Reddin's Funeral Home was the scene of notable services, two would stand out.  Lawyer and politician Thomas Jerome Curran died on July 29, 1958.  He had served as Secretary of State of New York from 1943 to 1955.   Newspapers reported that thousands of mourners paid there respects at Reddin's Funeral Home.

The New York City Police Department gave the men full department honors.  The funeral for 28-year old Pekearo was held on March 17 in Reddin's and both Police Commissioner Raymond W. Kelly and Mayor Michael R. Bloomberg spoke.  Outside, 14th Street was closed as "row after row in crisp blue uniforms and white gloves," as described by The New York Times' Manny Fernandez, stood at attention while the slain officer's casket was carried to the hearse.

Today the basement and parlor floors of the homes have been heavily altered, and corniced lintels were added at some point.  But the two mansions retain their handsome residential appearances; reminders of a period when some of Manhattan's wealthiest citizens made West 14th Street home.