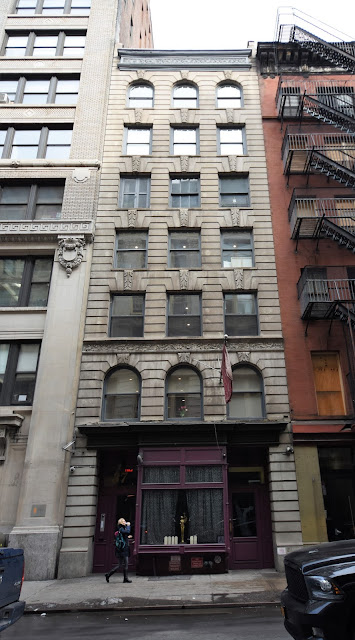 Gustav Hermann Kissel and his wife, the former Charlotte Ann Stimson, lived in the 25-foot wide, three-story brick-faced residence at No. 37 West 19th Street in the decade preceding the Civil War.   The couple had a daughter, Eleanora; who was joined by a new brother, Rudolph, in 1859.  Another son, Charles Henry, died on May 7, 1873, just days after his birth.

The Kissel children would do well for themselves.  On November 19, 1874 Eleanora married Francis Parker Kinnicutt, a wealthy doctor who would go on to national prominence.   When Robert graduated from Columbia University five years later, the family connection resulted in his becoming a member in the banking firm Kissel, Kinnicutt Co., eventually amassing a fortune of his own.

The 19th Street block between Fifth and Sixth Avenues was populated by similar well-to-do families.  Charlotte, like most socialites, busied herself with philanthropic causes, her apparent favorite being the Samaritan Home for the Aged.  When a "Saint Valentine's Kettledrum" benefit for the home was held in the 71st Regiment Armory on February 16, 1884, for instance, Charlotte was put in charge of refreshments along with Mrs. S. B. Dana.   In 1898 she was in charge of selling toys at that year's event.

By then the Kissels had been gone from 19th Street for as long as three years.  In 1898 their former home was being operated as a boarding house run by Susan Briggs.  Mrs. Briggs accepted a new boarder in March that year, Olive Nicewarner, described by The Sun as "a young Chicago school teacher."

Olive had come to New York to find work.  She brought references; but was unable to find a job.  Three months later her money was running out and she was understandably concerned.  She then applied for any work, still with no luck.

By the beginning of June she fell into fits of hysteria; and finally on Thursday night June 9, according to The Sun, "she became delirious, calling constantly for 'Charley.'"  Around midnight she had become so violent that her landlady called an ambulance to take her to Bellevue Hospital.

Doctors hoped that rest and quiet "would probably restore her."  She called throughout the night for the unknown Charley.  The newspaper wrote "the physicians hoped that he might be found, as communication with him, they believed, would be more beneficial to the young woman than any treatment they might prescribe."

Newspapers dropped the story and what became of the unfortunate Olive Nicewarner is unclear.

By the time of her breakdown the once fashionable neighborhood was seeing a change from residential to commercal.  By now Sixth Avenue, half a block away, was lined with magnificent retail emporiums, and the mansions of lower Fifth Avenue were being converted to shops or razed for loft buildings.

In 1900 Jacob Wolf purchased No. 37 West 19th Street for $36,000--slightly over $1 million today.  He quickly resold it to John Olsen in December 1901, who transferred title to his wife, Olga.  The Olsens, originally from Norway, were highly involved in real estate development.  On December 21 The Record & Guide announced that Olsen would replace "the old building" with "a store and loft building."  In announcing the architect, Charles Abbott French, the article noted he "has been his architect in previous operations."

Completed in 1902, the loft and store building was typical of the structures French designed for the Olsens.  Costing $45,000 (nearly $1.3 million in 2017), its seven stories were faced entirely in stone--a costly choice.  French designed the building in a quiet take on Renaissance Revival; reserving ornamentation to the full-height rustication, the handsome acanthus leaf keystones, an understated pressed metal cornice embracing a Renaissance-inspired foliate frieze, and a striking carved frieze below the second floor cornice.  It was here that either the architect or a stone carver flexed a touch of humor.

Hiding among the swirling leaves, unnoticeable except to only the most careful inspection, a single cherubic face peered out at passersbys.  The charming tongue-in-cheek detail no doubt has been noticed by only a handful throughout the building's existence.

The Olsens filled their building mostly with apparel firms, then sold it in June 1903.  The sale came none too soon.  The tenant on the top floor was the Dutch Decorative Art Company.  In addition to importing decorative household items, the firm manufactured goods like painted plaques that required the use flammable materials.

On the morning of November 23, 1903, fire broke out in the firm's seventh floor space.  High rise fires were a challenge at the turn of the last century, and by the time the blaze was extinguished $5,000 in stock was damaged.  The Evening World reported that as well, "a great deal of stock on the sixth floor [was] injured by water."


In the years before World War I the building was fully-rented to garment manufacturers; grossing a yearly rental of about $7,300 (around $163,000 in 2017 dollars).  When it was advertised for sale on December 9, 1916 it was described as a "seven-story modern store and lofts" with up-to-date conveniences like an elevator and steam heat.  The owners were apparently eager to sell.  The building was assessed at $59,000; but they offered it at $57,500 with "very easy terms."

The buyer was Jacobs & Livingston, which sold it four years later.  The building continued to be successful investment with rent having risen to $21,000 a year.

In was not until 1927 that the tenant list began to change as the garment district moved north of 34th Street.  That year electrical contractors Korowitz Leff took the second floor.  Within the decade they would be joined in the building by firms like the Artco Lamp Shade Company; and Quinn Stern, which did "contract work on floor coverings."


In 1946 the Ruko Company purchased the building for its factory and salesroom.  The firm manufactured photographic supplies--like camera cases and "gadget bags."  The leather cases, custom fit for specific camera models, were favorites among home movie buffs.

In the late 1960s the building became home to an altruistic endeavor.  On December 18, 1969 Bernard Weinraub, writing in The New York Times, said "At 8 A.M. six men trudge up the rickety steps of the loft at 37 West 19th Street.  They sit down silently and begin gluing slices of maple and pine into 12-inch toy pickup trucks."

The men were homeless, brought here from the Bowery by Brian Todes who operated the Dove Toys Project.  Part of a project to "medically treat and detoxify derelicts as a substitute for constant overnight jailings," it paid the men $2 an hour to manufacture the wooden toys.  Retailers like Macy's and Abraham & Straus purchased their goods during the Christmas rush.  The money from the sales paid for the supplies and the overhead at the 19th Street loft.

Todes explained to Weinraub, "They make toys for kids but there's not too much talk of Christmas.  They work quietly now, you know, because Christmas is such a lonely time for them."  Addiction was sometimes stronger than the Dove Toys Project's laudable efforts.  "Some of them were shaking violently at first and three of them have dropped out since we began eight weeks ago."

Sitting on the hem of Chelsea and the Flatiron District, No. 37 West 19th Street reflected the rebirth of both neighborhoods when Rock 'n' Roll Pizza began renovations of the street level in 1994.  The 24-hour nightclub-pizzeria provided video screens playing concerts.

In 2001 the upper floors where ladies shirtwaists and, later, camera cases were made were converted to apartments.  Five years later the Flatiron Lounge opened in the old store space.  The Times critic S. S. Fair described it as "dark, Deco, lite-FM jazzy [where] mixologists really go for broke."


Thanks to the building's location within the Ladies' Mile Historic District, Charles Abbot French's design is little changed (Rock 'n' Roll Pizza was forced to halt their intended exterior alterations in 1994).  And as was the case more than 115 years ago, the inquisitive little face still goes unnoticed as it peers out from above, hidden among the leaves.