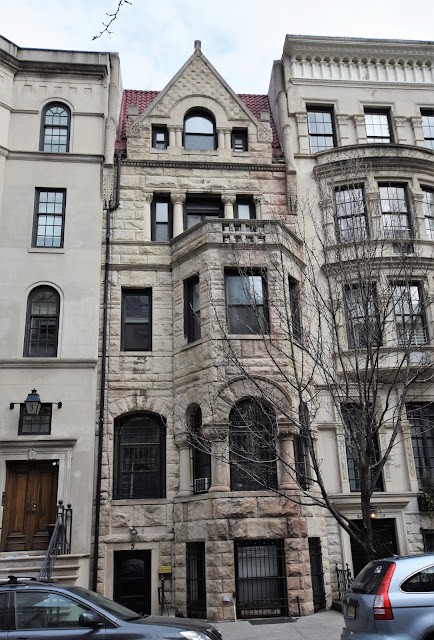 In 1892 architects Cleverdon & Putzel designed a row of five upscale homes just off Fifth Avenue on East 94th Street.  Robert N. Cleverdon and Joseph Putzel sometimes increased their profits by acting as developers as well; as was the case with this project.

Included in the row, completed in 1893, was No. 5.  Its chunky Romanesque Revival facade featured a three-sided bay that provided a stone-railed balcony at the third floor.  A loggia opened onto the balcony.   The tiled mansard of the attic floor was obscured by a high stone gable decorated with medieval carvings, checkerboard stonework, an a Romanesque take on a Palladian window.

The house was purchased by Ferdinand A. Straus and his wife, Zerline.  The couple had one son, Lionel.   Straus had founded the yarn manufacturing firm F. A. Straus & Co. in 1867.  By the time the family moved into the East 94th Street house the company was, according to Textile America magazine in 1897, a leading yarn house.  It occupied an entire building on Greene Street and operated an expansive mill in New Jersey.

The Greene Street building, which extended through the block to Wooster Street, was almost lost in 1895.  On  September 29 Straus fired his porter, John Bergen.  The disgruntled man immediately hatched a nefarious plot.

The following night he and two accomplices, William Sternborn, alias "Billy Balls," and John Lyons, alias "Lawrence," broke into the building.  They brought along a bottle of "cylinder oil, mixed with kerosene."  It would be necessary to carry out their plan to steal $25,000 worth of silk, then burn down the building to hide the crime.

The crooks were unaware that the building's engineer (the person tasked with keeping the boilers running, etc.) was on duty in the basement.  They managed to fill a wagon with 280 pounds of silk yarn before the engineer heard noises at around 4:00 in the morning.  He crept up the stairs and called out "Who is there?"  He saw three men rush down from the second floor and, although it was dark, he recognized John Bergen.

Bergen was arrested shortly after and he confessed to the plot.  The New York Times reported "Bergen said positively that the building would have been set on fire if he and the other men had been left undisturbed for a short time longer."

While the Straus residence had a fortress-like appearance, it was by no means impenetrable.  On September 18, 1898 it was the target of 23-year old burglar Frederick N. Hoyt.  It was one of 13 burglaries that had mystified police within a three-month period.  When he was arrested two days later, police explained his methods.

"Hoyt said that he always worked alone, and that his plan was to confine himself to the basement and first floor of a house.  He entered the houses in each case through the rear windows by prying out the casement."

When Lionel married, he and his bride had moved into the 94th Street house with his parents.  While Hoyt's plunder had been valued at than $175 worth of items; Ernest Feedor did better stealing a single item belonging to Lionel's wife in May 1906.   Feedor was a carpet cleaner who took advantage of the access to mansions to pocket small pieces.  While working in the Straus residence, he grabbed a single pearl and diamond earring.  The bauble was valued at $500--about $13,600 in 2017 dollars.   Like Hoyt, he was soon arrested.


The previous summer Ferdinand and Zerline had been in a dangerous accident.  The Straus summer home was in Long Branch, New Jersey.  On the Fourth of July in 1905 the couple took a drive.  The afternoon outing turned terrifying when an automobile approached on Cedar Avenue.  The carriage driver could not control the panicked horses and carriage struck a post and was upset.  The aging couple (Ferdinand was 65 years old at the time) were badly injured.

Zerline remained in the house until her death on November 11, 1928.  Her funeral was held in the parlor two days later.   Before long the house was sold to wealthy stock broker Charles Morgan Post and his wife, the former Julia Gilbert. 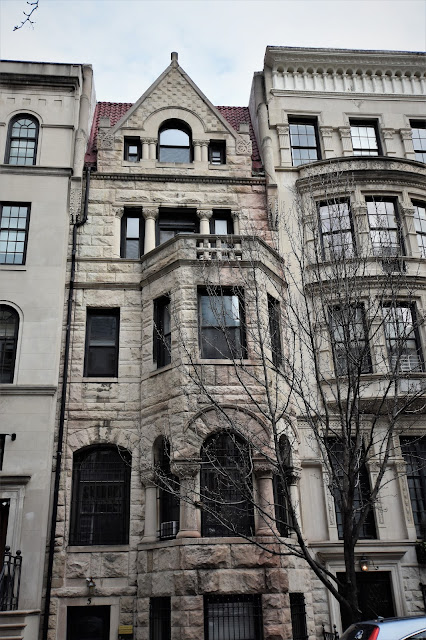 The couple had two children, Charles and Judy.  Their decision to buy was most likely driven by the fact that Julia's parents lived one house away at No. 1 East 94th Street.  Julia's father was the renowned architect Cass Gilbert.

Both the Gilberts and Posts maintained lavish summer estates in Ridgefield, Connecticut.  Cass Gilbert died in 1932 and two years later, on August 8 while visiting her mother's summer house, Julia died at the age of 45.  The New York Times suggested "her condition was believed by physicians to have been aggravated by her father's recent death."

No. 5 East 94th Street was sold in an all-cash deal in 1946.  Many of the mansions along the block had already been converted to apartments.  In 1951 the owners removed the stoop, installed a doctor's office in the former basement and converted the upper floors to two apartments each.

Cleverdon & Putzel's Romanesque Revival castle maintains its charming personality despite the loss of the stoop and entranceway.

Email ThisBlogThis!Share to TwitterShare to FacebookShare to Pinterest
Labels: cleverdon and putzel, upper east side