Jordan Lawrence Mott had a most impressive pedigree.  He was descended from a Norman knight, named La Motte; and his American roots reached back to the 17th century, when Adam Mott arrived in 1637.  He was descended, as well, from William Lawrence, who came to American in 1645.

Mott was born in 1829, to Jordan and Mary Mott.   His father was the owner of the a successful foundry, and owned several patents for cast iron stoves.  He purchased a vast tract of Bronx property in 1840 from the Morris family as the location for his expanding foundry business.  Decades later, as the city expanded northward, it would become known as Mott Haven.

The family lived at the corner of William and White Streets.  Mary died when Jordan was just 9 years old.  His father sent him away to be educated at the Irving Institute, in Tarrytown.  Afterward, in 1846, Jordan, Jr. entered New York University.  But three years later he dropped out when the Gold Rush promised quick riches and adventure.  His pragmatic father offered an ultimatum:

"You may have all the privations and profits of a miner's life without going to California.  You shall live in a tent in my garden, hold no communications with your friends or relatives except by mail, do your own washing and cooking, and be deprived of all that now makes your life enjoyable, and in return I will pay you the average wages of a miner.  Or you can remain at home, in possession of the comforts you now enjoy, with the prospect of succeeding to the business I have established."

He entered his father's business and worked his way up from the lowest position.  When he was made a partner in 1853 the company was incorporated as the J. L. Mott Iron Works.

Connolly started his career quietly and honestly.  Married to Maria S. Townsend, he first worked for an auctioneer, and then as a store clerk.  Things changed when he became Clerk of New York County in 1853 under the Tammany Hall Democrats.  In 1867 he was elected New York City Comptroller and became one of the major players within the infamous "Tweed Ring."   Shady dealings led to his nickname "Slippery Dick" and to the swelling of his bank account.

In November 1871 Connolly purchased land on Fifth Avenue, between 130th and 131st Streets in the newly-fashionable Harlem district.  His choice of architects for his mansion has been lost; but it was possibly A. J. Garvey, the designer of Connolly's "two-story and attic brick stable."

Connolly's mansion would be the last word in domestic architectural fashion.   French Second Empire in style, it was faced in brick and stone and was three stories tall including the high mansard roof.  The formality of the Victorian design was relieved by a charming full-width porch supported by pencil-thin twisted posts, bulging bays to the side, and lacy iron cresting along the roof line.


The politician's ill-gained riches enabled him to lavish the interiors with expensive hardwoods, carved mantels and door and window surrounds in the Renaissance Revival style, and stenciled ceilings. 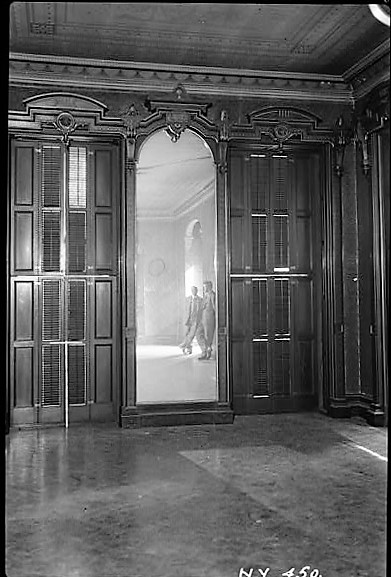 But even as the house rose, Connolly was in deep trouble.  Resolute reformers had been busily exposing corruption within the Tweed Ring.  The month before he purchased the Fifth Avenue lot, The New York Herald reported on an outcry for his retirement or expulsion.  On September 19, 1871 it wrote "As was generally anticipated, Mr. Connolly refused to yield possession of the Comptroller's office;" and in a separate article asked if newly-appointed politicians "remember their own favorite name for the Comptroller, 'Slippery Dick?''

With reformers closing in, Richard and Maria Connolly quietly began shifting ownership of the Harlem properties.  On December 30, 1871 Maria transferred title to two plots with total frontage on Fifth Avenue and 131st Street of 150 feet to Joel A. Fithian (their son-in-law) and Robert C. Hutchings.  The total price was 24,000; or about $480,000 today.   Then they diminished their ownership of the mansion lot--on paper--to one-third.

The transfer of ownership came just in time.  Richard Connolly was arrested on corruption charges and his bond fixed at a staggering half a million dollars.  Maria assembled a group of five relatives and a friend, George Hoffman, to post bond on February 1, 1872.  Among them, of course, was Joel A. Fithian.  The New York Times noted that Fithian, "declined to explain more particularly as to his business, except to say that he earned an honest living."

Richard and Maria's hopes of living in the Fifth Avenue mansion would never come to pass.  On May 13, 1872 the combined owners, including Fithian and Hutchings, sold the house and property from 130th to 131st Street to real estate operators Isaiah Meyer and Simon Wormser for $154,000.

In 1880 Jordan Lawrence Mott moved his family into No. 2122 Fifth Avenue. Because Connolly had never been able to fully complete the house, Mott added modern finishing touches that were now slightly out of architectural character.


Jordan Mott was highly regarded in business and society.  A member of the American and the New York Yacht Clubs, he was also president of four firms, including the Mott Iron Works.  So despite its location far from Manhattan's social epicenter below 59th Street, the Motts would entertain members of the topmost echelon of wealth and power.

On Friday, February 4, 1893, for instance. Mariana gave "an informal tea in honor of Mrs. French-Sheldon, the African explorer."  The mere concept of a female explorer was thrilling; but May French Sheldon's exploits were even more so.  She had traveled unaccompanied, working her way around the Lake Chala region only with the assistance of natives.

The Mott drawing room was filled with items collected by the explorer.  The New York Times remarked "The guests enjoyed a most interesting account of Mrs. Sheldon's experiences in the Dark Continent."   The names of the thrilled guests read like a Who's Who of New York society: Stokes, Morgan, Mackay, Morrie, Lawrence and Benedict among them.


A few weeks later the Motts gave an entertainment that was surprising in its ladies-only guest list.  On March 12 The Times noted "The most unique dinner of the week was that given by Mr. and Mrs. Jordan L. Mott, Jr., on Tuesday evening in honor of Col. William F. Cody--'Buffalo Bill'--at which fourteen ladies, including the hostess, were present, the only men who participated being the host and Col. Cody."


In 1887 Marie Louise had married attorney Charles Fraser MacLean.  The couple lived in the Fifth Avenue mansion with her parents, and shared in the Mott summer estate in White Plains, New York.  Their movements were followed by society columnists, such as the mention on November 30, 1895 that "Mr. and Mrs. Jordan L. Mott and Mr. and Mrs. Charles F. McLean of 2,122 Fifth Avenue have returned to town for the Winter."

On March 2, 1898 Marianna died in the White Plains house.  Her funeral was held in the Fifth Avenue mansion two days later.


When the Spanish-American War broke out that year, Jordan Mott offered the Government the use of his yacht, the Puzzle.  The New York Times later said "this vessel was used as a fast dispatch boat and privateer during the war."

Five years later, in January 1903, Jordan Mott transferred title to the mansion to Charles and Marie Louise.  In reporting on the sale The Real Estate Record & Guide noted "He has been living in the house.  Mr. Mott last week took title to No. 55 East 49th st."  But if he anticipated moving, it does not appear that it ever came to be.

By now Charles had risen to State Supreme Court Justice.  He and Marie Louise entertained often and lavishly.  A notable event was the dinner party in honor of Archbishop John Murphy Farley on May 11, 1904.  The other 14 guests were newspaper reporters who traveled from as far away as Chicago, Baltimore, Atlanta, New Orleans, and San Francisco.

Also living in the house were Jordan, Jr. and his wife, Carolyn Pitkin, whom he married in 1900.  The 23-year old Jordan brought much unwanted publicity to the family in October 1904 when he was sued by an actress for breach of contract.

Christina Marsh, whom The Sun described as "about 20 years old, slightly built, and is a blonde of attractive appearance," appeared in court with her mother on October 29 demanding $25,000 in damages.  The actress poured out her story to the judge, saying she had met Mott "a couple of years ago and they became very friendly."

Marsh insisted she believed him when he said he was single, and that "he assured her that he loved her devotedly."  In March 1903, according to her, he proposed marriage.  The wedding was set for that summer, but he repeatedly postponed it, saying he wanted to finish his studies at Harvard.

Then in April 1904 she was told he was married.  The Sun reported "She could not believe this to be the fact, but on investigation she discovered that he had been a benedick since he was 19 years old."  The reference, easily understood to Edwardian readers, was to Shakespeare's character in Much Ado About Nothing.  The term now meant a married man.

Christina Marsh's allegations were most likely true.  Later, in 1912, Jordan boarded the freighter Indrade as its purser.  The ship was headed to China.  Also on board was light opera singer Mrs. Francis Hewitt Bowne who disguised herself as a male and got a job as a cabin boy.  After Carolyn divorced Jordan, he and Francis were married.


On July 26, 1915 Jordan L. Mott, Sr. died in the Fifth Avenue mansion at the age of 87.  The New-York Tribune attributed his death to "old age."   His entire family, including Jordan Jr. and his new wife, were at his bedside.

At the time of his death The New York Times mentioned Mott's art collection, housed in the mansion, which it deeded "one of the most notable in this country."  The article also said "His Fifth Avenue home was for many years a social centre.  Assisted by his daughter, he gave many costly entertainments."

Harlem grew up around the Mott mansion as Marie and Charles MacLean continued their upscale entertainments and lifestyle.  Among their staff was Marie's secretary, a nurse, a butler, a "man of all work," a chauffeur, a cook and "second maid."

Charles died on March 20, 1924.  Marie Louise stayed on in her beloved family mansion surrounded by her loyal staff.   In June 1937 she was interviewed by Wakefield Worcester.   He made note that "In the horse-and-buggy days, she had a negro coachman who with his wife and two children lived in the second story of the coach house.  While the coachman and his wife died some time ago the two children were still living there, rent free."


The reason Worcester had stopped by to talk to Marie was because her house was threatened with demolition.  A year earlier Parks Commissioner Robert Moses--well remembered for preferring sometimes outlandish civic improvements over historic interests--had proposed condemning the Mott property for a playground.

There was at least some outcry.  On August 18, 1936 E. L. Hatwood wrote to the editor of The New York Times, calling the property a "beautiful landmark" and saying it "for more than a half century has been an oasis and an eye relief."

Moses was not one to be swayed by sentimentality. Marie, now 82 years old realized she could not win the fight; but asked through her lawyer "only to be permitted to spend the remainder of her aging days in the reminiscent atmosphere of the home given by her father."

Instead, she was evicted.  Marie leased the old Newbold Morris house, at No. 1081 Fifth Avenue at the corner of 89th Street.  In reporting on the lease The New York Times explained on September 22, 1936 "The City of New York is taking over the Mott property for a playground."

Marie Mott MacClean watched as her venerable family home was bulldozed.  She died at No. 1081 Fifth Avenue 10 years later, on July 12, 1946.