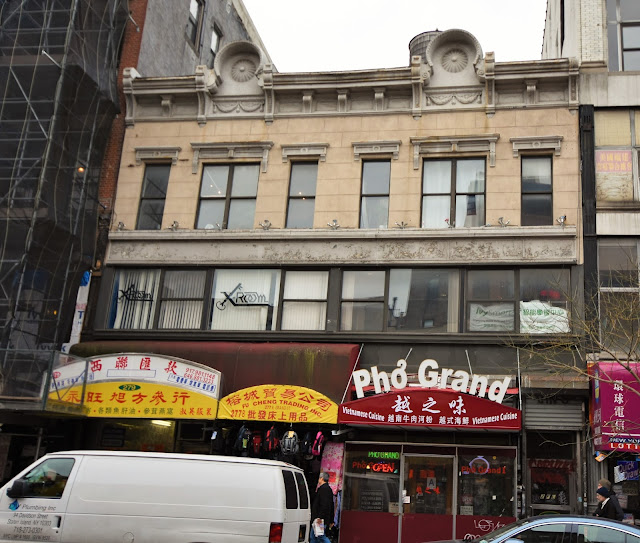 Exactly ten years before the signing of the Declaration of Independence, Grand Street was laid out; its exceptional width earning it its name.  By the 1820s the road was lined with handsome Federal-style brick faced homes. One of these, No. 279, was home to "Brother Lovett," a member of the Columbia Lodge No. 1 of the Odd Fellows.   Lodge meetings were frequently held in the Lovett house.

Half a century later things had drastically changed on the Grand Street block between Forsyth and Eldridge Streets.  Grand Street had become a major shopping thoroughfare.  The expansive dry goods store of Hill, Moynan & Co. had engulfed the four houses at Nos. 271 through 277.  Like its neighbors, the former Lovett house had been converted to a commercial structure.
Another dry goods merchant was Morris Rosendorff, who opened his store around 1863.  When his son, Louis, entered the business it was renamed M. Rosendorff & Son.  As the population of the Lower East Side exploded, Morris Rosendorff got in on the development bandwagon, focusing as much of his attention on building tenements and stores as on his dry goods business.

Rosendorff bought and sold property at a dizzying rate in the first years of the 1880s.  He repeatedly turned to the architectural firm of A. H. Blankenstein & Co.   Blankenstein's partner was Henry Herter.

Morris Rosendorff already owned No. 279 Grand Street when the Mott Estate sold eight "store, dwelling and tenement" properties on October 22, 1886.  The Record & Guide reported "M. Rosendorff, the Grand street dry goods merchant, secured four of the eight parcels for $110,200."  In a separate article it noted "No. 277 Grand Street...which was so eagerly bid for" sold for $65,400--a little over $1 million today.

A month later The Manufacturer and Builder reported that Rosendorff intended to construct "two iron-front stores" at a cost of $50,000 on the site of Nos. 277 and 279.  The article did not mention an architect.  Most likely that was because Rosendorff had a decision to make.  Henry Herter and A. H. Blankenstein had parted ways.  Herter was now partnered with Ernest W. Schneider and the pair would make their mark on the Lower East Side mostly designing tenements and loft buildings.

By mid-month Rosendorff had made up his mind.  On November 13, 1886 the Record & Guide pointed out that "Ernest E. W. Schneider and Henry Herter, who have entered into partnership" had made plans for a six-story tenement for Rosendorff on Henry Street.

Simultaneously, Schneider and Herter went to work designing a tenement and store for him at No. 141 East Broadway, and the two matching buildings on Grand Street.  The plans for the Grand Street structures estimated the costs at $25,000 each.

The completed structure was, in fact, not totally clad in cast iron as originally planned.  The third floor (all that remains of the 1886 design) was faced in planar stone.   Here cast metal lintels floated slightly above the openings.  It was the highly-unusual cornice, however, that stole the show.   Its bracketed and paneled design, including molded swags, would not have been out of the ordinary were it not for the two deep hoods encompassing giant rosettes.  They smacked of the Moorish details that would be seen on Schneider & Herter later synagogues.

While Morris Rosendorff and his son operated their dry goods store in the building and continued to wheel and deal in real estate, Mrs. Rosendorff busied herself with philanthropies.  In 1887 she hosted a ball in the new Webster Hall and used the proceeds to feed 400 impoverished Jews at Passover.  The following year she outdid herself.

On March 26, 1888 The New York Times reported "Mrs. M. Rosendorff, a benevolent Hebrew, went all the way to 52 Eldridge-street yesterday afternoon from her home, 108 East Sixty-second-street, to distribute more than 5,000 pounds of meat to the deserving poor."

On January 24 she had rented the Roumania Opera House on the Bowery and sold 1,000 tickets to a benefit performance of King Solomon.  The funds paid for a kosher butcher shop on Delancy Street "to supply the meat, and when the beasts were slaughtered according to the Jewish rite, everything was ready for distribution" in time for Passover.

The line of indigent "from nearly every part of the city" began to form around 11:00 on March 25 and continued until around sunset.  Each would receive a paper "order" to take to the butcher.  The newspaper noted "The first poor person served was Mrs. Mary Isaacs, who said she was mother of six children.  Mrs. Rosendorff gave her an order on Mr. Levy for seven pounds of meat.  Mrs. Isaacs returned effusive thanks and then made for the butcher's, where she got her Passover food."

Among the nearly 800 who received their orders were some non-Jews; "but that made no difference to Mrs. Rosendorff; they were poor and they might share," said The Times.

Businesses were required to report the number of employees between the ages of 8 and 14 to the Board of Education.  In 1893 M. Rosendorff & Son listed just one worker in that category.  But none of the employees would be working for the dry goods store for long.

Morris Rosendorff's declaration of bankruptcy in the fall of 1893 was reported across the country.  The Chicago Tribune noted on November 24 that the firm had unsecured liabilities of $75,000--a sizeable $2 million in today's dollars.  The company's attorney, Adolph L. Sanger, explained "The Rosendorffs for the last few years have been buying and selling real estate and building houses, and the difficulty of raising money in the last few months bothered them very much."

Three months later a Sheriff Sale was held to auction off the vast Rosendorff inventory.  Once emptied, Nos. 277 and 279 were offered at auction in May, 1894.  But no one seemed interested.  After several attempts, they were finally sold at foreclosure auction on November 1.
Although M. Rosendorff & Son had operated from the combined buildings, they were now sold separately.  No. 277, purchased by Charles S. Fairchild, brought $48,000 and No. 279 was sold for $50,000 to Joseph Levy.

Despite their independent owners, by 1896 there was a single tenant, G. Glauber, who operated his "novelties" store here.  At around 11:40 p.m. on the night of December 16 that year a fire broke out in the store.  Before it was extinguished it had spread to the millinery shop of J. Nasanowitz next door at No. 275.

By the turn of the century separate businesses operated from the two buildings.  No. 277 was sold in 1898 following Charles Fairchild's death.  By 1900 it was the candy store and factory of John D. Harder; while No. 279 was home to Isaac Krauschauer's cloak business.

The two properties would be united again in 1904 when Nicholas Pappas purchased them in April.  Like John D. Harder, Pappas and his partner John Condax were candy makers.  Within months the confectioners hired architect William C. Sommerfeld to do $1,000 in interior renovations.

In 1908 Pappas & Condax were manufacturing and selling one particular article which drew the suspicion of the Board of Health.  Samples of their Chocolate Roman Punch Drops were taken for testing.  The results were satisfactory--"alcohol absent."

The following year Pappas & Condax left Grand Street, while retaining ownership of the properties.  Once again the two buildings were leased separately.  The latest in fashion for Edwardian women included extravagant headgear often ornamented with rare feathers.  The London Feather Novelty Co., headquartered on West 34th Street, opened a branch store in No. 277 where it would remain for several years.  The other store was rented to F. Davis, who was granted permission by the Board of Aldermen in 1910 to "keep two show cases within the shop line in front of No. 279 Grand st."

At some point following World War I the buildings' owners had returned to their native country.  On June 25, 1921 The Record & Guide reported "John Condax and Nicholas Pappas, of Greece, sold 277-279 Grand st...The buyer will occupy."

That buyer was Louis Frescher who opened his fur store in the combined buildings.  The furrier would remain here for many years, despite an uncommon string of bad luck.  It started on March 4, 1924 just as salesman Jack Greenbery had put final touches on the window display.  Three men entered and asked to see furs.

Just as Greenbery headed for a display case, one of the men drew a revolver and ordered him into a rear bathroom.  Hearing the noises, fur-cutter Jacob Feingold emerged from the workshop in the rear, and was ordered to join the salesman.  When the porter, Thomas Benjamin, came up from the basement, he too was corralled in the bathroom.  All the employees were tied up and $15 was taken from Feingold's pockets.

The New York Times reported "While hundreds of persons were passing the door...three men, armed with revolvers..escaped with $30,000 worth of mink, sable and Hudson seal coats and neckpieces."  The cool bandits even made several trips to their automobile, bringing back blankets into which they wrapped 40 furs pieces and 20 coats.

The valuable furs were repeatedly a temptation to crooks.  In 1932 an attempted robbery landed one crook in Sing Sing with a 20-year sentence.  Then in November 1935 a hold-up resulted in $20,000 worth of goods being stolen.  Less than a year later, on the morning of September 14, 1936, eight men rushed into the store at around 10:00.  As had been the cast in 1924, they forced Bernard Trencher, an owner, and bookkeeper Rae Levinson into a rear room.

"Then they compelled Ernest Jackson, Negro porter, to lead them to the workroom, under the store, where Michael Picozzi, designer, and ten other employes bent over their benches," said The New York Times.

The workers were told "This is a hold-up.  Keep quiet, and nothing will happen to you."

While two men held everyone at gunpoint, the other six "swept up all the furs in the workroom, cleaned out the street show-windows and emptied all the store racks."  They made off with $40,000 in loot.

In the meantime, the Trenchers had renovated the building in 1925.  They hired architect Irving H. Fenichal to install a restaurant on the second floor and a "dwelling and studio" on the third.  Six years later architect Samuel A. Hertz did further renovations, remodeling the top floor for the Columbus Civic Club.  It would remain here until about 1940, when the space was renovated for "light manufacturing." 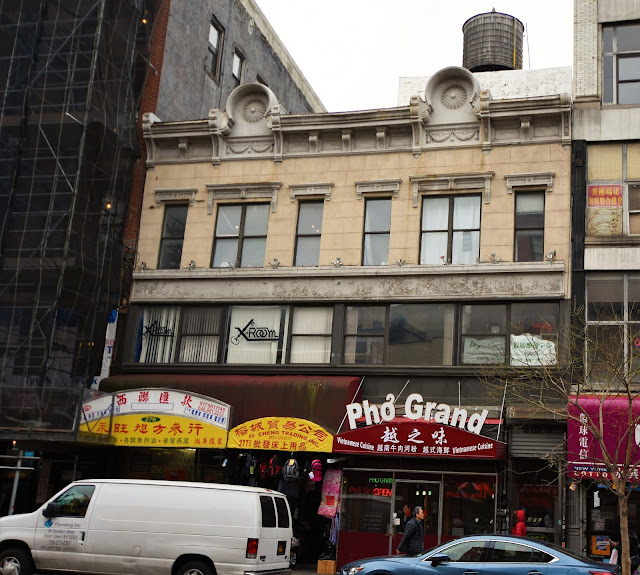 After mid-century the two addresses saw a variety of tenants, including the Eldridge Textile Company which was here from the 1950s in the mid-1990s.   The firm suffered a blaze on the night of December 3, 1960 that resulted in three injured fire fighters and "considerable" damage to the stock.

The neighborhood that filled with German Jews in the 1870s and '80s when Morris Rosendorff over-speculated in real estate now sits squarely in Manhattan's Chinatown.  Schneider & Herter's cast iron base is gone--replaced by a medley of cheap storefronts under garish vinyl awnings.  But, above, the remarkable cast metal cornice survives, reminding the passerby of a time when Grand Street was an important shopping district.

photographs by the author
Posted by Tom Miller at 12:40 AM