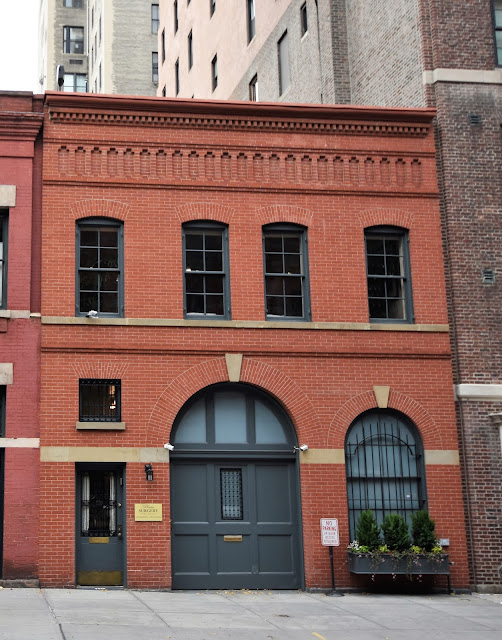 In 1818 Robert Lenox paid paid $6,920 for thirty acres of land "at the Five-Mile Stone" north of the city where wealthy New Yorkers still maintained large summer estates.    The price Lenox paid was a staggering amount and he knew he had overpaid for the land.  But he also predicted the eventual value of the property as the growing city spread northward.  In his will dated May 23, 1829, he cautioned his son, James, to hold on to the potentially-profitable land.

Called the Lenox Farm throughout the 19th century, the district would eventually be known as Lenox Hill.   James Lenox complied with his father's wishes, retaining possession of the land for decades.  But shortly before his death on February 17, 1880 the Lenox Farm was plotted out for high-end residences and the sites were quickly bought up.

On July 3, 1880 the Real Estate Record & Builders' Guide commented on the rapid and high-end development.  "In many particulars, 'Lenox Hill' is already in advance of the still famous 'Murray Hill;' especially in the magnificence of its palatial architecture."  Among the new mansions the article listed was the 80-foot wide home of Alexander H. Stevens at the corner of East 68th Street and Park Avenue.  (The massive residence was demolished in 1909 for the Percy Rivington Pyne mansion, designed by McKim, Mead & White.)

The Guide noted that Stevens's architect was "Mr. Harney of Baltimore, Md."   G. E. Harney was no stranger to New York City, however.  A year earlier he had completed plans for the Stevens Building at No 12 Wall Street; and had submitted designs for the massive Union League clubhouse.

Alexander H. Stevens was president of the Sixth National Bank.   As his mansion neared completion, he brought Harney back to design his private carriage house.  Plans were filed on February 20, 1880 for a "two-story brick stable" costing $7,300--around $175,000 today.  Located at No. 110 East 66th Street, between Park and Lexington Avenues, it was conveniently close; yet far enough away to be inconspicuous to the Stevens' refined lifestyle.

Unlike the private carriage houses of some other millionaires which were miniature palaces for horses; the Stevens stable was comparatively understated.  Harney used warm, red-orange Philadelphia brick with minimal limestone trim.   Creative brickwork suggested voussoirs and splayed lintels, and created a decorative three-dimensional frieze.

The stable followed the normal layout--a centered carriage bay flanked by openings.  Harney strayed from the expected symmetrical design when, instead of repeating the arches of the bay and window, he made the side door an undernourished rectangle.   The second floor included a residence for an employee, most likely the coachman.

Stevens did not retain ownership of the carriage house for long.  In 1883 it was the property of William L. Skidmore.  Like Stevens, he was a banker and in February that year was among the founders of the Bank of Banks.  In November he hired builder L. N. Crow to renovate the stable.  Included in the $1,500 worth of updates were an extension to the rear, a new stairway and "lantern skylight."

Skidmore's ownership of the carriage house lasted a bit longer than Stevens's.  He sold it in 1898 to millionaire William Collins Whitney.  Whitney's first wife, Flora, had died at the age of 51 in 1893.  The former Secretary of the Navy surprised both New York society and his family when he married the widow Edith Randolph in 1896.  The year before purchasing the 66th Street carriage house, the newlyweds had moved into the massive former Robert Stuart mansion at No. 871 Fifth Avenue, which Whitney had extensively remodeled.

The millionaire's vehicles and horses far outnumbered those of either Stevens or Skidmore; and he simultaneously purchased the abutting stable at No. 112 East 66th Street.

William C. Whitney died in 1904; but the family retained ownership of the two stables.   In 1910 the heirs transferred title to the Whitney Realty Co.; but at some point Harry Payne Whitney purchased No. 110 for his personal use.

Massively wealthy, Whitney was married to the former Gertrude Vanderbilt, daughter of Cornelius Vanderbilt II.   While Harry was well-known as a capitalist and sportsman, Gertrude made a name for herself as a sculptress and collector and patron of the arts.  The couple, who had three children, maintained a Fifth Avenue mansion and a spectacular estate in Westbury, Long Island.

Harry Payne Whitney died on October 26, 1930, leaving an estate of nearly $72 million.  The carriage house had not seen a horse in decades and now The New York Times reported "His garage at 110 East Sixty-sixth Street was valued at $150,000."  Despite the Great Depression, it was a noticeable upgrade in real estate value, equaling more than $2 million today.

The carriage house was converted to the home of Flora Miller Biddle in the last quarter of the 20th century.  Biddle was the granddaughter of Harry and Gertrude Whitney; and the chairman of the Whitney Museum.  In 1994 architect Karen Jacobson was commissioned to convert the first floor, still being used as a garage, to a medical office. 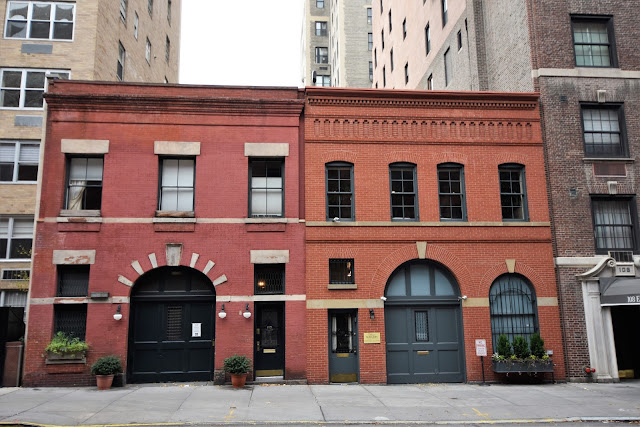 The two former Whitney stables survive as the last holdouts on the block from a time when it was lined with the carriage houses of nearby millionaires.