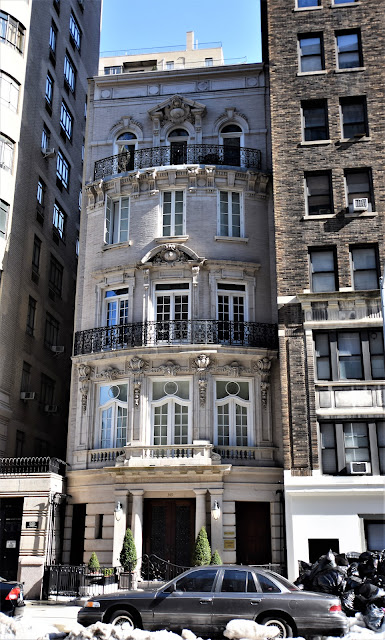 Builder Terence Farley had been highly involved in the development of the Upper West Side in the 1880s.  Two of his sons, John and James, continued his business under the name Terence Farley's Sons.  A third son, Joseph, struck out on his own.

Like his brothers, Joseph A. Farley produced high-end speculative residences.  He often turned to the talents of architects Janes & Leo, and such was the case in 1900 when he began construction on two nearly-matching mansions at Nos. 349 and 351 West 86th Street, just off Riverside Drive.

The houses were completed the following year.  Farley had taken out a $40,000 building loan to construct the lavish residences--more than a million dollars today.  Already known for their Parisian-inspired apartment buildings and mansions, Elisha H. Janes and Richard L. Leo had produced two Beaux Arts beauties that would have been more expected on the east side of Central Park.

The entrances, a few steps above the sidewalk, were centered within rusticated limestone bases.  Above, the architects distinguished the otherwise twin houses by brick color--beige at No. 349 and red for No. 351.  The second, or piano mobile, level featured three sets of French windows fronted by a stone balustrade.  The frothy brackets upholding the balcony above dripped floral carvings. 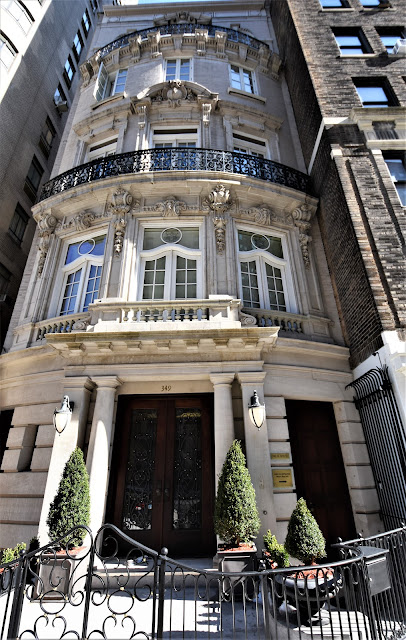 An ornate iron railing protecting the balcony of the third floor was echoed at the fifth; where the bowed facade terminated to create a spacious outdoor area.  The French-style residences had all the bells and whistles expected of the style--ambitious, ornate pediments; leafy garlands, and intricate carvings--except a mansard.   The houses ended rather abruptly in flat cornices instead of high roofs pierced by fussy dormers.

Farley sold both of the 25-foot wide houses before they were finished.  No. 351 sold on January 18, 1901, and No. 349 about two weeks later.  The latter became home to another developer, Samuel Borchardt.

The 34-year old Borchardt and his wife, the former Eva Rosenfield, would have a daughter, Evelyn, and a son, Stuart.  Born in San Francisco, he was president of S. Borchardt & Co..  Keeping the business in the family, Eva served as vice-president.

Like most wealthy women, Eva was active in charities and her name was routinely listed as a supporter of the Jewish Protectory and Aid Society.  But she made time for lighter diversions, of course.  On August 11, 1907 the New-York Tribune commented that "Never before has Paris been so full of Americans as this summer" but "The German watering places are also receiving an exceptionally large quota of smart American visitors."  Among those smart visitors were the Borchardts.  The article noted "At Franzenbad a beauty contest was held a couple of days ago, and the prize was awarded to Mrs. Samuel Borchardt." 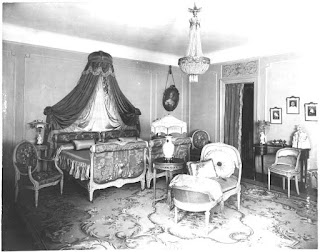 The Borchardts were among the first winter residents of Palm Beach, Florida--established as a resort by Standard Oil tycoon Henry Flagler in 1902.  They built their estate, La Solana, on Sunset Avenue in 1905.

Samuel's name appeared in The New York Times for a heart-warming incident that occurred on September 11, 1910.  He was seated in his limousine as it passed along Fulton Street in Queens, when a 13-year old boy, John Bieuchner, ran into its path.

The newspaper reported "It knocked the boy down.  He got up dazed, and started to cry when he saw blood dripping from a wound in his scalp."

Borchardt got out of the limo and said "Jump in here, little boy, and we'll give you a nice ride."  He directed his chauffeur to head to the nearest hospital.  The thrill of riding in the expensive automobile made Bieuchner forget about his wound.

The Times wrote "The boy jumped in, and his crying changed to smiles of delight as the auto sped through the streets."  After his cut scalp was bandaged, Borchardt gave the boy a ride back to his home.

The  article ended: "'Thank you for the ride,' said the boy as he was left in his mother's care."

The developer was busy putting up large apartment buildings on the Upper West Side at the time.  Three months before the incident he had filed plans for a 12-story apartment building on the south east corner of Broadway and 98th Street; and five years later erected another on the same block.

As Borchardt razed private homes for his apartment buildings, other developers were doing the same closer to home.  Little by little the West 86th Street block was transforming to one of multi-family buildings.  Yet the two matching French mansions held on.  At least for now.

The Great Depression did seem to greatly disrupt the Borchards' (they dropped the "t" from the name during the anti-German fervor of World War I) lifestyle.  In 1930 Evelyn was attending Vassar and Stuart was at the University of Pennsylvania.  Samuel was retired by now.  He and Eva were at La Solana in March when he suffered a fatal heart attack at the age of 63.

In reporting his death the following day, on March 9, The New York Times mentioned that "he owned much property along Park Avenue and in the Broadway and Wall Street sections."  He also owned extensive Palm Beach property.  Borchard left an estate of about $500,000--more than $7 million in today's dollars.

The house next door had already been purchased by Dr. John A. Harriss, president of the Broadway Association and of the Rivercrest Realty Corporation.  He also owned the entire blockfront on Riverside Drive between 86th and 87th Street, and the properties at Nos. 348 to 352 West 87th Street.

Now, in May 1931, he offered Eva $85,000 for her house.  The Times noted "By acquiring the Borchard house the syndicate's holdings will be enlarged to 150 feet on Eighty-sixth Street."  The implication was clear--a massive apartment building was in the works.

But instead the house was leased to the Academy for Allied Arts.  Before they moved in, however, Eva had to remove the costly antiques and artwork, including Pieter Brueghel the Elder's "Peasants' Wedding Feast," for which her husband had paid $100,000 in 1928.

The Academy remained in the mansion until 1945.  It offered classes in music, drama, painting, sculpture and drawing.  The academy also staged regular art exhibitions, music recitals and dramatic presentations.

By now the Borchardt mansion was the last on the block.  No. 351 had been razed in 1938 along with eight mansions along Riverside Drive, to make way for the expansive Art Moderne-style Normandy apartment building.


Frothy Beaux Arts private homes were decidedly out of fashion and on April 7, 1946 The New York Times remarked that architect J. M. Berlinger had embarked on a mission to modernize "old private homes and tenements which...represent a burden on the owners."  Among the buildings the article described as constituting "an eye-sore and a neighborhood drawback" was No. 349 West 86th Street.

The renovations did not extend to the facade, thankfully.  The house was leased for several years to the Normandy Democratic Club; and then in 1950 the Borchard Management Corp. offered for sale the "Handsome mansion, unusual size, perfect for Group or Individual."

After exactly half a century, the Borchard family's ownership came to an end.  The house was purchased by Russian Prince Serge Bellosselsky and his wife, the former Florence Crane.  The exiled prince donated it be used as the House of Free Russia.

Run by an organization composed of representatives of 30 Russian American organizations, the group explained that the building would be "used as a center for anti-Communist Russians in this country."  Three-hundred people attended the dedication on December 1, 1951, including Metropolitan Anastasius, the head of the Russian Orthodox Church overseas and spiritual leader of all exiled Orthodox Russians.

Vladimir Jabaeff, vice president of the Russian American Union thanked the prince and princess and said "Henceforth every Russian will know that in New York there is a house which is his and which has been conceived as a rallying place for the enlightenment and spiritual fortification of the Russians in dispersion.  Henceforth no Russian shall be lost in this gigantic city." 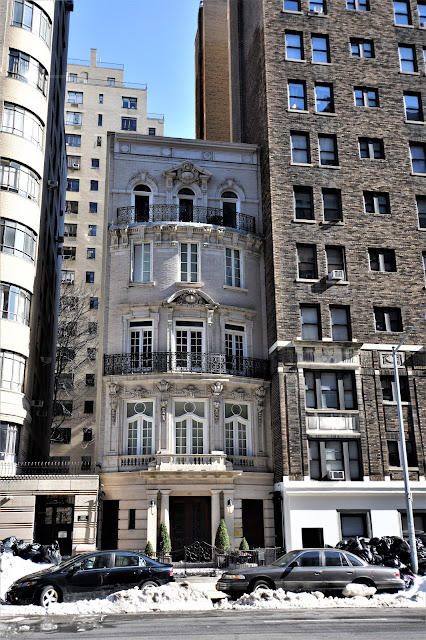 The architectural integrity of the mansion was threatened nearly four decades later when, on December 24, 1989 the Russian Aid Society announced it had made what Richard D. Lyons of The New York Times called "an unusual real estate deal" with two developers.  The symbiotic alliance would result in dropping nine additional stories onto the building, planned to contain 11 luxury residences and 3,200 square feet of medical offices.  The Russian organization would share in the income from the doctors' offices.

Architect Anthony Morali drew the plans for the $5.5 million project, which promised that the exterior would "resemble the 1870 facade."  The developers were off by 30 years in their historical facts.

For whatever reason, the project fell through; but, sadly, not before the interiors were gutted.   The Russian Aid Society sold the house in 1999 for $1.4 million.   Developers had a 15-story condominium in mind; but neighbors launched a successful revolt against the project. 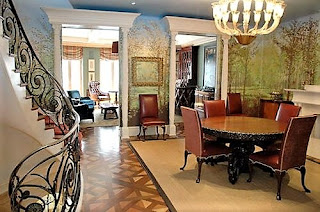 A new buyer, Randall Rackson, brought the shell back to a private home with seven fireplaces, eight bedrooms and 14 baths.   In January 2013 he placed it back on the market with a significant jump in price: $50 million.  After its several brushes with demolition, the stubborn hold out is the last relic of the Gilded Age on the West 86th Street block.