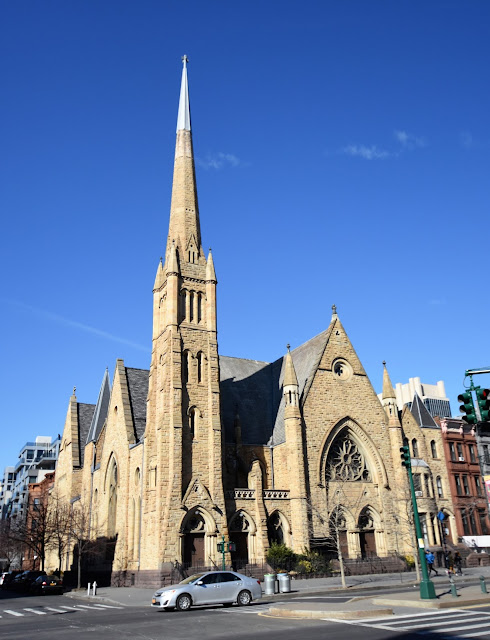 In 1660, just 35 years after the Dutch West India Company erected the fort that would become New Amsterdam, Dutch pioneers built a small church far to the north.  It served a tiny settlement that would become the village of Haarlem, named after the old town in their homeland.

The Reformed Low Dutch Church's little building sat at what would become 125th Street near the Harlem River.  More than two centuries later, in May 1888, The Treasury; a Magazine of Religious and Current Thought supposed "it was most likely of split logs.  The contributions were in planks, nails, schepels of wheat, day's work."  Twenty years later a stone church was built; but it was destroyed by the British during the Revolution.

By the time of the article the congregation was in its fourth building.  Harlem (the town's spelling had lost one of its a's) was no longer a remote village; but was quickly blossoming into a vibrant northern suburb.  A committee was formed on April 11, 1884 "to consider the expediency of erecting a new church."

That new church would not be the fifth structure the the group; but the first for a newly-formed congregation.  A History of the Reformed Low Dutch Church of Harlem, published in 1910, explained that original plan was that the new structure would replace the old.  But then, "it was decided to continue work in the old field.  The two churches were, therefore, joined into one corporation and thus became collegiate."

Things moved rapidly.   Ground was broken on April 26, 1885 and the cornerstone laid on June 24.  The structure was completed in September 1886.  Although architect John R. Thomas's plans projected the construction costs at $60,000, The Treasury quoted the final cost at a staggering $215,000.

John Rochester Thomas was also drawing plans for the Harlem Methodist Episcopal Church on West 136th Street while working on Second Collegiate.   For the Lenox Avenue congregation he produced a Gothic Revival structure of undressed Ohio sandstone.  Massive gables faced the avenue and the side street, dominated by Gothic arches.  The slate-tiled roof changed directions and angles creating a mountainscape roof line.   The entrances were flanked by engaged towers that pointed upward, minaret-like, on either side of the gable.  But it was the corner bell tower that monopolized attention.

The tower rose to a carillon that sat just above highest point of the roof line.  A slender stone steeple continued until the feature was twice the height of the church proper.  The needle-like steeple was topped not by a cross, but by a Gothic crocket.


The membership of 150 and the first minister, the Rev. George Hutchington Smyth, were transplanted from First Collegiate.  The Low Dutch Reformed Church, however, had greater expectations.  The new building had a seating capacity of 1,100.

The Lenox Avenue edifice was dedicated on September 30, 1886, two hundred years to the day after the stone building that had replaced the log cabin was dedicated.  The Reformed Low Dutch Church History called it in 1910, "a striking coincidence."

By 1891 the congregation was deemed by The Sun as "one of the richest congregations in Harlem."  But all was not tranquil within.  That spring Rev. Smyth was disturbed by reports that his members were displeased with him.  He asked a group of pastors of the Reformed churches to "examine into the differences between himself and his people."

Their findings were astonishing.  Members were questioned, and they said "he was a great caller and visited three times a year members of the church, and that his views were broad, so that the young people could not complain.  Socially he was all that could be wished for."  And the membership had not fallen off.  So what was the problem?

The New York Times reported "His preaching did not please all, and as he is over fifty years old members of the church began to think that a younger man might be more efficient in strengthening the church in the growing field on the west side of Harlem."  But no one could point out a specific problem.  "The church had simply felt that it was better to have a new pastor."

Smyth was replaced by the Rev. Dr. William Justin Harsha who was lured from Omaha, Nebraska.  His installation was held on October 20, 1892.  The New York Times remarked "A pleasant feature of the services was the singing of a hymn the words of which were written by Dr. Harsha."  The congregation's claims that they needed a younger preacher did not hold water, considering that Harsha was 68 years old--13 years older than Smyth.

During those pleasant ceremonies no one could predict that, like his predecessor, the congregation's love affair with Harsha would not last many years.


Although the building was just eight years old, John R. Thomas was called back in June 1894 to remodel his Second Collegiate Reformed Church.  And these were no small changes.  His plans--costing $35,000--called for new "slate roofing, stained glass, concrete and pine floors, hardwood finish, structure ironwork and church furniture."

The expensive renovations came at a surprising time.  The Financial Panic of 1893 was a devastating depression and unemployment had reached 12 percent nationwide.  Although his congregation seems to have been financially more secure than the average New Yorkers, Rev. Harsha addressed the gloomy conditions in his sermon on September 20, 1896.

"We should be in an attitude of hope," he said in part.  "Things are bound to improve.  I have faith in the soundness at heart of the American people."  He concluded "Storm always clears the sky."

A sermon on March 21, 1897, was a bit more controversial, at least by a 21st century viewpoint.  A theological movement had emerged that suggested some stories in the Old Testament were allegorical--Jonah and the whale, and the Garden of Eden, for instance.  Harsha asserted that "Jesus regarded the whole Old Testament as the Word of His Father."  Therefore, the stories were true.

"Eden is presented as a real garden, the first pair as genuine flesh and blood, and the whole account claims to be sober history.  The only fair and safe course is to take the record just as it stands, and not try to explain it away as an allegory."

Rev. Harsha's earlier sermon which promised that "Storm always clears the sky" did not, as it developed, apply to him personally.  Before coming to New York he had invested in a religious publishing house.  Around 1896 the business failed, leaving the minister with a crippling debt of $40,000.

When the embarrassing situation reached the newspapers the congregation of the Second Collegiate Reformed Church, seemingly forgetting their Christian teachings, forced the 76-year old to resign.   On December 18, 1899 the New-York Tribune reported that the disgraced Dr. Harsha was "in Texas or the Indian Territory, preparing to engage in missionary work among the Indians, and that his family are visiting relatives in Massachusetts."

Rev. William Harsha's replacement, the Rev. Edgar Tilton, Jr., was installed on February 4, 1900.  The New-York Tribune described him as "a young man" who was "well-known to his new charge."  Tilton received a significant honor later that year, in November, when he was selected as chaplain of the 71st Regiment.


As Rev. Harsha had done, Tilton embarked on massive renovations to the church building.  On June 8, 1901 the renowned architectural firm of Renwick, Aspinwall & Owen filed plans to "raise walls and general alterations."  The brief description hardly explained the massive scope of the project.

The organ was removed and the sanctuary closed for the summer--a good time for construction since well-to-do families were off to their country homes or resorts.  The Reformed Low Dutch Church of Harlem said "The wall back of the pulpit was removed, an arch constructed, and iron pillars placed in the small chapel to support a gallery for the organ...and the whole interior decorated.  The cost of this improvement was about $12,000."

The remodeled church was opened and rededicated on November 3, 1901.  The New-York Tribune reported "New exits at the west end of the galleries have been put in, and the whole interior has been decorated and refurnished.  The seating capacity has been increased about one-eighth."


The remodeling was quickly followed by a series of gifts in the form of new stained glass.  Windows honoring the memory of children were installed over the south gallery, given by the Kindergarten department of the Bible School.  The were soon followed by two more windows in memory of deceased children; these over the east gallery.  Unveiled on June 8, 1902 (Children's Day), one, "The Boy Jesus in the Temple," was donated by Mr. and Mrs. Benjamin F. Mills in memory of their 13 year old son Samuel Fairchild Mills, who died in June 1900.  The other, "Christ Blessing the Children," was given by Mr. and Mrs. Eugene S. Hand in memory of Lilian May Hand, who died in August 1894 at the age of 15.

One by one other windows were donated and installed, until the final two, the "Walk to Emmaus" and "The Light of the World," were unveiled on Easter Sunday, 1910.  That year was momentous for another reason.  The Low Dutch Reformed Church celebrated its 250th anniversary in November the events would continue for weeks.

Christian Intelligence described the sanctuary decorations on November 30, when Dr. Tilton "gave a historical address."  The magazine said "The old Dutch flags emblematic of our ancestry, the Stars and Stripes, significant of preservation in the past and continued protection in the future, and the glowing figures 1660 and 1910, blazing forth from the pulpit of the Lenox avenue Church, which was flanked with palms, the presence of the old bell cast in Holland in `1734 especially for the old Dutch Church of Harlem--all being so suggestive of a gala time resulting from a glorious history, added to the impressiveness of the services."


At the time the demographics of Harlem were changing as black residents relocated from downtown.  The Second Collegiate Reformed Church remained in the Lenox Avenue building until 1929, when it somewhat surprisingly moved downtown to East 89th Street.

Among the congregants were civil rights activist John Byard and his wife.  When Lucille Byard became ill in 1944 John thought it best to take her by train to Washington DC for treatment at the Washington Sanitarium (now the Washington Adventist Hospital).  He phoned ahead to ensure that arrangements would be made.

When the couple arrived, the staff was shocked to see that their patient was black.  John was pulled aside and told that the Sanitarium was for whites only.  His wife could not receive treatment.

By the time Byard could find another hospital that would admit Lucille, it was too late.  She died in Freedman's Hospital a few days later.

By 1945 the membership had swollen to move than 1,000.   Disaster struck on January 9, 1969 when fire broke out in the upper portions of the Youth Chapel.  The sanctuary was gutted and, despite the fire captain cautioning his men "Don't destroy the windows!" several were lost.  The steeple, iconic to the building, was so weakened by the heat that 30 feet had to be removed to prevent collapse.

The nearly decade-long rebuilding cost $2.3 million.  The renovated church was reopened in 1978, with a still-stumpy steeple.

In the meantime, the importance of Ephesus Seventh-Day Adventist Church in the community was somewhat symbolized in 1975 when Walter J. Turnbull organized the church's boys choir.  The group would become known as the Boys Choir of Harlem and would perform in venues throughout Europe and in prestigious American concert spaces like Avery Fisher Hall. 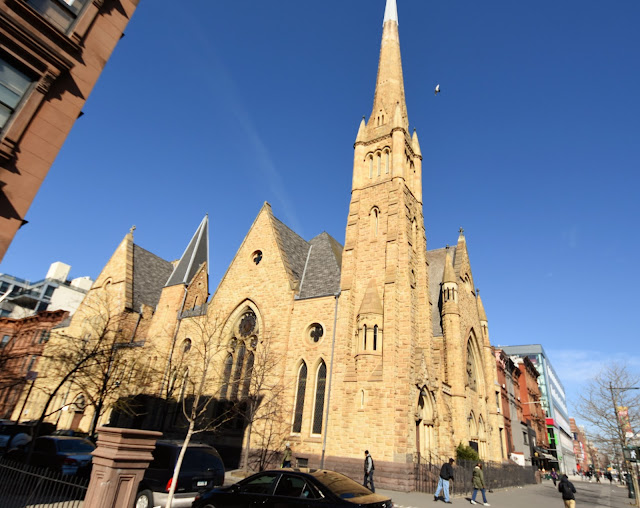 Finally, on December 11, 2006, the steeple regained its full height.  A copper-and-steel replacement, coated in lead, was fitted over the stone stump.  And happily, although the replacement was in metal rather than stone, the decorative crocket was reproduced.