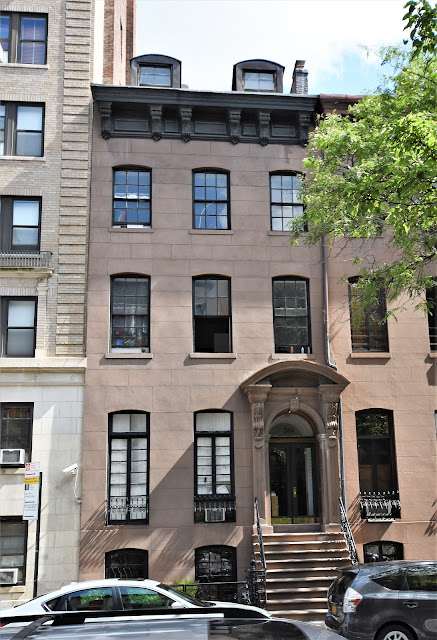 As Clement Clarke Moore sold off building plots within his family’s former country estate, Chelsea, Don Alonzo Cushman and James Wells were greatly responsible for the development of the new neighborhood.  In 1833 Cushman purchased the large property on Ninth Avenue between 20th and 21st Street and constructed a commodious home for his family.  Behind was a substantial garden.

Cushman erected rows of speculative, high end homes in Chelsea, such as his distinctive Cushman Row.  Begun in 1839 the string of elegant Greek Revival rowhouses on West 20th Street between Ninth and Tenth Avenues were just steps away from the Cushman house.
Almost two decades later Cushman started another project, three brownstone-faced houses on West 20th Street directly behind his garden.  Stretching from No. 359 through 355, they rose three stories above English basements.   Tall dormers sat behind the bracketed cornices.  The elaborate entrances and the handsome double doors in their rope-carved enframements spoke of the comfortable financial status of their intended owners.

Two years later Don Alonzo Cushman chose profit over family comfort when he built a fourth, matching house in what was his garden.  No. 361 was completed in 1860, an identical match to its earlier neighbors.

The new house saw a succession of owners.  By the early 1880s William Hastings called it home; followed by Alfred Ogden and his family.  Ogden traced his American lineage to jurist David Ogden (born in 1707).  A historian at the University of Michigan’s William L. Clements Library, where the family’s papers are preserved, later said “During the early years of the Republic, the Ogden family of New Jersey and New York parlayed ability, family, fortune, and political resilience into social and economic power.”

Alfred was born in 1815 in New York City and studied at Columbia College.  He rose to Vice President of the Oriental Insurance Company, a position he held until the firm’s closure in 1886.  He and his wife, Caroline, had two sons.

Ogden was 71 years old when the Oriental Insurance Company was dissolved and The New York Times noted that shortly afterward “his health became impaired.”  Alfred retired, living on in the 20th Street house with his aging wife and servants.

On February 22, 1898 he died in the 20th Street house at the age of 83.  In reporting his death, The New York Times reminded readers that he was “of the old New York family of that name.”  His social status was reflected in the fact that his funeral was held in the fashionable Trinity Chapel, and his burial was in the venerable Trinity Churchyard among the graves of Manhattan’s elite.

Just over a year later, on Saturday, December 9, 1899, Caroline died at the age of 79.  As had been the case with Alfred, her funeral was held in Trinity Chapel.

The house became home to Albert D. Horton, who was appointed a City Surveyor in 1910.  By 1920 Dr. F. Homer Curtiss lived here.  A 1909 graduate of the University of Pennsylvania, Curtiss founded The Universal Religious Fellowship, Inc. which attempted to scientifically support the theory of reincarnation.  He issued four pamphlets on the subject which were later, in 1949, combined into a book by the Universal Religious Fellowship entitled simply Reincarnation.

On February 13, 1920 The Pennsylvania Gazette reported that Curtiss would be absent from No. 361 West 20th Street for an extended period.  The article announced he “is leaving on a transcontinental lecture tour which will probably take him to Australia and around the world.”

Curtiss was followed in the house by another spiritual—if more traditional—type.  On May 22, 1935 the Rev. Felix Lossing Cirlot received his Doctor of Theology degree from the nearby General Theological Seminary in Chelsea Square.  Like Curtiss, he was an author and would publish religious-based books like Christ and Divorce, The Early Eucharist, and Apostolic Succession at the Bar of Modern Scholarship.

When Reverend Cirlot left No. 361 West 20th Street it was the end of the line for the comfortable house as a private home.  The 1940s saw the once-gracious residence operated as furnished rooms.  Retired postal worker George C. Snead lived here in 1947.  When he returned home late on the night of June 12 that year, he was accosted in the hallway by two men, one armed.

When the thugs discovered that he had only $4 on him, they beat the 60-year old and left him there.   Snead walked to the 20th Street Station House to report the assault.  While he spoke to the desk sergeant, Detectives Samuel Bress and James Costello were on patrol.  They noticed two suspicious teenagers at the corner of Ninth Avenue and 20th Street, just steps from No. 361.

The New York Times reported the following day, “Just as the detectives walked up, the two ran.  During the chase, the detectives said, 18-year-old William Dejesus drew a pistol and pulled the trigger three times, but it failed to fire.”

Dejesus and his cohort, 16-year old Henry Williams, were hauled into the station house.  And there was George C. Snead.  The Times reported that the teens admitted the crime and “twenty other hold-ups and a burglary.”  The hooligans were held at $7,500 bail each—a substantial $80,000 today.

The Chelsea neighborhood continued to experience decline and crime at mid-century.  In 1953 Puerto Rican-born Peter Parasi rented a furnished room in No. 361.  The 57-year old had made his living as a dishwasher; but in June that year was out of a job.

Five years earlier Parisi had been injured in a traffic accident and hired attorney Morris Nadel to represent him in a damage suit.  The case was settled out of court on October 25, 1951 for $10,000.  Nadel took half the settlement as his fee.

Now, with his $5,000 spent and without a job, Parisi was desperate.  He applied for home relief from the Welfare Department in 1953.  The agency required documentation of his financial need.  And so on June 18 Parisi went back to Morris Nadel’s office to ask for a letter confirming he was destitute.

While the lawyer’s secretary typed the letter, she heard the two men arguing.   When Miss Analfitano’s intercom buzzed, she responded to Nadel’s office.  She found her employer on the floor with a deep stab wound to the abdomen.   He died within 20 minutes.

Other employees in the office held Peter Parisi who later admitted “losing his temper and knifing the lawyer.”  Parisi would not be returning to his room in the West 20th Street house.  He was arrested on a charge of homicide.

In 1968 the house was converted to two apartments in the basement and parlor floors, and one each on the floors above. 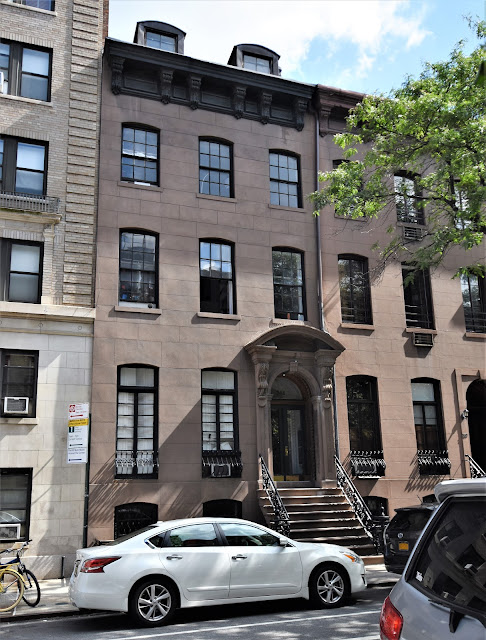 Although the brownstone details of the windows have been shaved off—as with the others in the Cushman row—No. 361 retains its original dormers and beautiful entrance.  The carved doors (which survive at No. 357) have been replaced with glass-paned replacements, expected in an apartment building.  Nevertheless, the house that took over Don Alonzo Cushman’s rear garden retains the elegance of a much different, pre-Civil War, West 20th Street.

photographs  by the author
Posted by Tom Miller at 2:22 AM