Shoppers and tourists in Soho are often surprised and delighted by the quirky building at No. 152 Spring Street--what appears to be half a house.  Even the Landmarks Preservation Commission describes it as "the surviving section of a house that has been cut in half."  But architectural forensics and history argue against the charming concept.

All the houses along the blockfront, between Wooster Street and West Broadway, rose simultaneously around 1819.  Built by George Wragg the three-story homes were faced in brick; their peaked roofs distinguished with the dormers expected in the Federal style.

Nos. 152 and 154 were unquestionably separate homes, like their nearly-identical neighbors.  By 1843 No. 152 may have been operated as a boarding house.  The unmarried Eliza Crary lived here that year.  She taught in the "female department" of the School of the Mechanics' Society nearby at No. 32 Crosby Street.

The house next door became a girls' school in the years preceding the Civil War.  On October 21, 1859 an advertisement promised "Ladies requiring the advantages of a rapid and graceful style of penmanship, or private lessons in the English branches, will receive instruction at the academy of Mrs. Broome, 154 Spring street, N. Y."

While Mrs. Broome taught young ladies penmanship, Joseph Grundy established the "Ancient Order of the Grand and Cordial Daughters of Ruth" in No. 152.  The organization was more or less a female version of the Free Masons--at least in theory.   Grundy, who was insultingly described by The New York Times on February 13, 1861 as "a very black specimen of the sons of Ham," had "established various societies, both male and female, the members whereof might recognize each other in any part of the world by [their] signs and tokens."

The Cordial Daughters of Ruth was headed by the "Queen of Queens."  While mainly a female organization, "Tickets of Dispensation" were issued to a few male members.  Grundy charged new members a $1.50 initiation fee; then a matching "constitution" fee.  Any violation of the complex rules of the society resulted in fines.

Joseph Grundy found himself in court in February 1861, charged with "obtaining money under false pretenses."  A new member of a male society, the "Grand National Compact of United Romans," had become suspicious when he was asked for the constitution fee (the combined initiation and constitution fees would equal about $85 today).  When he asked for his money back, Grundy told him "the treasurer of the Society is out of town, and you will have to wait."

Rather than wait, he summoned the police.

The books of the Cordial Daughters of Ruth were subpoenaed.  An examination, according to The Times, revealed "it appears that the financial bank of the concern is the aggregate of fines, paid in accordance with the following provision, taken verbatim from the book:

All members that don't put in A Penny for Lights in 3 Meetings Shell be fine 3 cents.   Any Brother who shall Spit on the flour shall fine 6 cents.  Any sister laughing shall be fine 12 1/2 cents.  Attested 7 times seven in the holy Cardinal."

Secelia Jackson was found in violation, according to the books.  She was "found 12 1/2 Cents if she didn't have her apron."  Aprons, it seems, were a regulated part of the members' regalia.

Grundy pleaded his own case, despite having counsel.  He explained to the judge that his life had been "devoted to the elevation of his race" and the advancement of temperance.  He said he had learned the secrets of his various orders in Africa and Asia.  His arguments did not sway the judge.

"Mr. Grundy waxed very eloquent, and the perspiration rolled down his cheeks in torrents.  But the Court wasn't convinced, and sent him to the Penitentiary for one month," concluded The Times.

No. 152 continued to house renters throughout the next decade.  In 1874 11-year old Alfred Potter and his father went to Washington Square to see the Fourth of July fireworks display.  They were among the crowd of approximately 5,000 when a near disaster took place.  Sparks from a rocket fell onto a large pile of "rockets, bombs, and other missiles," detonating them.   Exploding fireworks flew in every direction, resulting not only in panic, but injuries.  Young Alfred was struck in the leg by a bomb, but only slightly hurt.

Another boarder was out of work the following year.  In February 1875 he placed an advertisement: "Wanted-By an Englishman, a situation as butler in a private family, or as waiter in a hotel."

In 1882 the elderly attorney John P. Jayne rented at room in the building.  On January 19, 1883 The Sun noted "John P. Jayne, the old claim lawyer of 7 Murray street, has been laid up in his room at 152 Spring street for two months."

By now the ground floor of the former residence had been converted for business.  J. Cavagnaro operated his barbershop from the first floor, renewing his lease in 1885.  The following year he added the sale of cigars to his business.

The house was owned by the Sternberger family at the time.  When it was sold in March 1887, Henrieta Sternberger owned one-half, and Maurice and Mayer Sternberger the other.  The combined price of $12,000 would be equal to about $308,000 in 2017.  In reporting the sale, The Record & Guide described the property as a "three-story brick store and dwelling."

The buyer, Asher Weinstein & Co. also owned No. 154.  It may have been Asher Weinstein & Co. who made further alterations to both houses.  The ground floor changes included a simple bracketed cornice and, most likely, a shop front that projected to the cornice edge.  Possibly at this time the Federal-style doorway with its fluted columns and transom was removed.

At some point the peaked roofs with their dormers were replaced by a joined gable; half of which survives.  Its handsome quarter round windows had nothing in common with the original Federal-style architecture.  They would have been expected in side gables of a Georgian house of a generation earlier than these.  Too, close inspection of the brickwork reveals that the running bond of the gable does not match the common bond of the facade below; more evidence that the gable was added later.

Of particular interest (and mystery) are the wide openings of the two upper floors.  No other surviving Federal house on the block has such elements; and their very existence in an 1820s house is highly doubtful.  Federal architecture embraced balance; and there would be no purpose of wide, expensive windows in a residence.  Although the Landmarks Preservation Commission points to the block-paneled lintels at the third floor as "indicating that this was the original window arrangement;" it is perhaps more likely that a long lintel matching the original was fabricated.

The popular Colonial Revival movement at the time could explain both the Georgian-style attic window and reproduction lintels.

The two houses, now apparently mirror images, would not see common ownership again until the 21st century.  Louis Kast not only owned No. 152, he lived there.  The Real Estate Record & Guide referred to it as a "brick store and tenement" in January 1895.  Kast died in his rooms on July 3, 1897 at the age of 44.

The upper floors continued to be rented rooms through the turn of the century.  Teresa Milam lived here in 1904 when three street toughs grabbed her purse containing $8.  The boys, known on the street as "Dope, "Horse," and "Iran," were actually 11-year old Nino Cardina, 9-year old Agostino Marsaco, and 14- year old Louis Eirand.

In Children's Court on September 21 the thieves turned on one another.  The Sun took pains to imitate their unpolished dialect.  The newspaper reported that Eirand (or Horse) told the judge "Me an' Dope ain't done nothin'.  Iran touches de lady for de book.  Me and Dope chases him to get it back for de lady."

In December 1910 H. Mankin hired architect L. A. Sheinart to design a four-story loft and store building to replace No. 154.  The old house was demolished, leaving No. 152 to appear as just half a house.

In a remarkable foreshadowing of things to come half a century later; in 1933 architect H. Hupfauf designed renovations that resulted in a commercial space on the first floor with a single-family home above.

The transformation of Soho from industrial to artsy in the last quarter of the 20th century brought the W. P. A. restaurant to the ground floor of No. 152.  Now where working men got a shave and haircut in the 1880s weekend tourists sat down to brunch.

W. P. A. gave way to the New Deal restaurant which staged "The Game Festival" in December 1983.  The concept would no doubt raise ire among many today.  New York Magazine reported that the restaurant served "scallopine of lion grandmere, loin of hippopotamus, and rattlesnake salad," among other exotic fare that week. 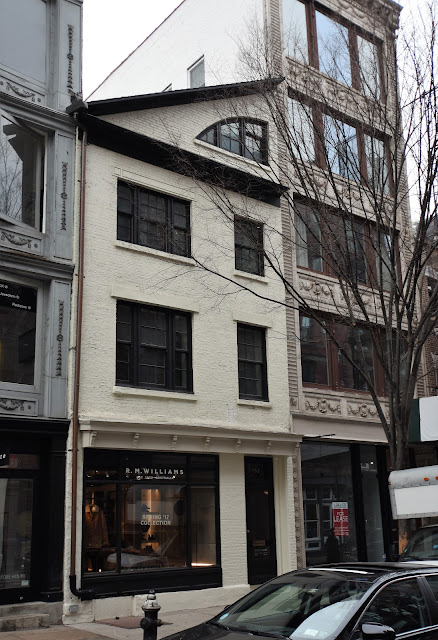 That restaurant was replaced by Boom in 1994.  Described by New York Magazine as "postmodern Asian in a rain-forest setting," it remained here until 2013.  Recently Nos. 152 and 154 were joined internally to create expansive (and expensive) condominiums.  Today the ground floor houses an upscale boutique.  And the eccentric little off kilter building continues to be a favorite attraction for visitors to Soho.