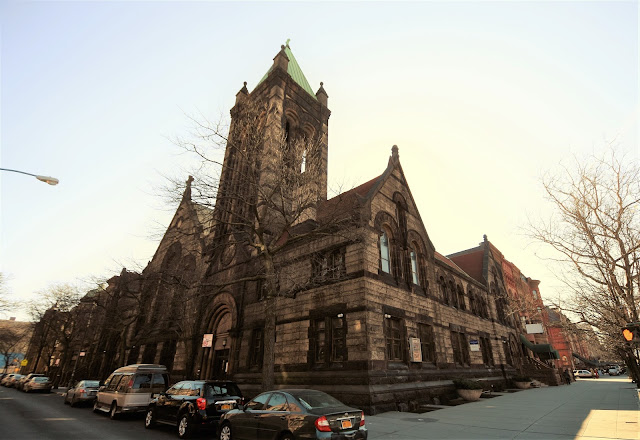 The Lenox Avenue neighborhood above 120th street was one of wealthy professionals in 1888.  Comfortable homes, some worthy to be called mansions, had made this section of Harlem a new upscale suburb.

On May 21 that year The New York Times reported on the ongoing construction of the Episcopalian Holy Trinity Church, at the southeast corner of Lenox Avenue and 122nd Street.  "When completed," the article promised, "this will be a handsome and spacious religious edifice, the material used being Worchester granite and Long Meadow sandstone.  This combination of stone and colors, a reddish hue with the hue of the dove, was a favorite one, it is said, with the architect Richardson."

That Richardson was Henry Hobson Richardson, whose beefy take on Romanesque Revival earned the name Richardsonian Romanesque.  The Times critic was well founded in mentioning him.  After the church's completion, the Real Estate Record & Guide noted "Most observers of the new church will be impressed by its likeness to the works of the late Mr. Richardson, though this is nowhere an imitation."

The architect was William Appleton Potter and his choice of styles was not surprising.  For years he had been supervising architect for the United States Treasury--a post he held until 1877.  He produced civic structures like courthouses, post office buildings and custom houses; and formed a partnership with Robert Henderson Robertson, Potter & Robertson, in 1875.  Robertson was highly influenced by Richardson and his name, too, would be linked to the Romanesque Revival style.

By now Potter had been on his own for seven years.  His Church of the Holy Trinity, completed in 1889, reflected his past works; a masterful design of chunky, undressed blocks; rounded arches; contrasting hues and a dominating bell tower.  While the Record & Guide had asserted it was in no way an imitation of Richardson, it could not help pointing out the similarities.

In describing Potter's "triplets of round arches," the Guide said it "was a favorite feature of Mr. Richardson's."  And regarding the materials--red tile for the roof, red granite as the main material, with "rich brown sandstone" for the trim--the article added "This combination was one of Mr. Richardson's happiest introductions."

Nevertheless, the architect was given his just recognition; several of the elements being termed "novel" and almost all described as "successful."  And both adjectives were used in describing the inside:  "The interior of the church is quite as successful as the exterior, and has much more of the interest of novelty."  The writer explained that the "novelty" was important because it "comes not of an attempt to do something new, but ensues from the effort to meet requirements in some respects novel in the most straightforward way."


The pews and other furniture were of oak, matched  in the paneling over African marble wainscoting in the chancel.  Potter had commissioned Louis C. Tiffany to decorate the space.  The Record & Guide described "Mr. Tiffany's decoration" as "deep in tone and of a sombre richness.  The richness of the interior has been very judiciously concentrated upon the apse."  The seating area, 90 feet square, church accommodated more than 1,200 worshipers.

The Church of the Holy Trinity was among the first major congregations in the area.  It was organized in 1868 by the Rev. William N. McVickar, when, according to the New-York Tribune later, "that part of the city was taking on active life."  Its first building was erected in 1870 on Fifth Avenue and 125th Street.   King's Handbook of New York City explained in 1892 that it "has enjoyed a continually increasing measure of prosperity, culminating in the present beautiful edifice, and a communicant list of nearly 1,000."

The construction of the magnificent structure brought with it enormous cost.  It would be years before the congregation would pay off its $210,500 debt--an amount equal to nearly $5.6 million today.

Among the congregants was Civil War hero Major General Abram Duryee.  Duryee saw action in the battles of Bull Run, Antietam, and Cedar Mountain, among others.  His service was recognized by Presidents Abraham Lincoln and Andrew Johnson.

Following the war, in 1873, he was New York City Police Commissioner.  It was during his tenure that the police were called out to quell a labor protest in Tompkins Square Park on January 13, 1874.  They attacked the crowd with batons and mounted police charges.  Surprised and defenseless, many were injured and dozens arrested.  The New York Committee for Safety, which had organized the protest, condemned Duryee for having "charged his police upon inoffensive workingmen like so many 'bulldogs.'"

Duyree's response was cold.  According to Richard Hofstadter and Michael Wallace in the 1970 book American Violence, he said "It was the most glorious sight I ever saw the way the police broke and drove the crowd. Their order was perfect as they charged with their clubs uplifted."

When Abram Duryee died at the age of 76 on on September 27, 1890 at his nearby home on 126th Street, New Yorkers preferred to remember his wartime accomplishments.  His funeral in the Church of the Holy Trinity on September 29 was conducted with full military honors.  The Evening World provided a list of the esteemed pall-bearers: including among others General H. T. Tremain, General Hiram Duyrea, General Philip F. Viele, and Colonel Daniel Appleton.  The New York Times remarked that the military attendance of at the funeral was "almost without precedent on any similar occasion."

As with most churches, many of the stained class windows were installed later; gifts of congregants.  One of the most impressive was that donated by Leander H. Crall in memory of his wife.  Designed by Francis Lathrop, who had created the windows and chancel decorations for St. Bartholomew's Church, it was 23 feet high and 7 feet wide.  Depicting "The Adoration of the Magi," it contained 13 life-size figures and was unveiled during Christmas Eve services in 1899.   The critic for The New York Times deemed it "the most satisfactory, and, in some ways, the most artistic that he has yet produced."   He added that the window was "remarkably fine" chiefly due to the "devotional spirit which Mr. Lathrop has breathed into his work, and which is rare in any art work of this material and unpoetic age."


As New York City grappled with the push for legalization of alcohol on Sundays, the Rev. Dr. H. P. Nichols chimed in from the pulpit on February 2, 1902 with a surprisingly open-minded attitude.  He pointed out that the Sabbath was reserved for worship and leisure.   But some for some people, leisure included drinking beer; and their only opportunity to do so in those days of six-day work weeks was on Sunday.  The legislation of morals, he proclaimed, was a slippery slope and quoted the Archbishop of York who said "I would rather have England free than England sober."


It was not until New Year's Day 1910 that the church was finally debt-free and, therefore, could be consecrated.  An anonymous check for $35,498 found in the collection plate on Thanksgiving Day had wiped out the congregation's debts.

In 1923 a new organ costing $35,000 was installed.  At the time the demographics of the Harlem neighborhood had been changing for years as black residents replaced white.  Those changes would come to the Church of the Holy Trinity only after a devastating fire nearly destroyed the building.

Around 7 a.m. on April 15, 1925 a passing motorist noticed smoke coming from the windows.  Before long the fire had grown to what The New York Times described as "the most spectacular blaze Harlem has had in years."  Four fire companies responded and battled the flames for three hours.  "The firemen had scarcely started to get inside when the groaning of roof timbers caused them to run for shelter under the stone pillars on the west side of the church.  In a few seconds the roof collapsed."

Thousands crammed Lenox Avenue to watch the horrifying inferno.  When it was finally extinguished The Times wrote "The tower and a mere shell of blackened stone walls are all that remain of the Protestant Episcopal Church of the Holy Trinity."  The organ, the stained glass windows, "said to be art treasures," the bronze and marble baptismal font, the work of Paul Winters Morris--essentially everything inside--were destroyed.

The $150,000 project would "make it a social and religious centre for the negroes of Harlem."  The Society announced "The structure, which was badly damaged by fire several years ago, will be renamed St. Martin's Church."  Dr. Sunderland stressed the importance of revitalizing the church, saying that Harlem "is the battleground of good and evil in the negro life of America."

The renovations were completed by summer; but it was not until June 5, 1932 that the church was officially dedicated.  Bishop William T. Manning conducted the services.  The formal name of the edifice sounds shockingly racist to 21st century minds: the Protest Episcopal Church of St. Martin for Negroes."

In his remarks Manning attempted to prove he was racially unprejudiced; with remarkable failure at least by today's viewpoint.   His comments about "my own close association with your race" were the near-equivalent of "some of my best friends are black."  He insisted "It is a fact, as many of you know, that the first two babies I ever baptized were colored babies; the first church building I consecrated was for colored people, the first parish house I dedicated was for colored people, the first class I confirmed after I was made Bishop was a class of colored people."

Seven years after the dedication fire devastated the building again.  A five-alarm blaze on January 19, 1939 resulted, once again, in only the outer walls standing.  The damaged was estimated at a quarter of a million dollars, more than $4.25 million by today's standards.

The congregation was determined to rebuild.  Included in the reconstruction was the replacement of the carillon.  It was executed by the Royal Eijsbouts foundry in Asten, the Netherlands, and installed in 1949.  (When the Cathedral of Notre Dame de Paris celebrated its 850th anniversary in 2014, it called on the Royal Eijsbouts foundry to recast its largest bell, the 6-ton "Marie.") 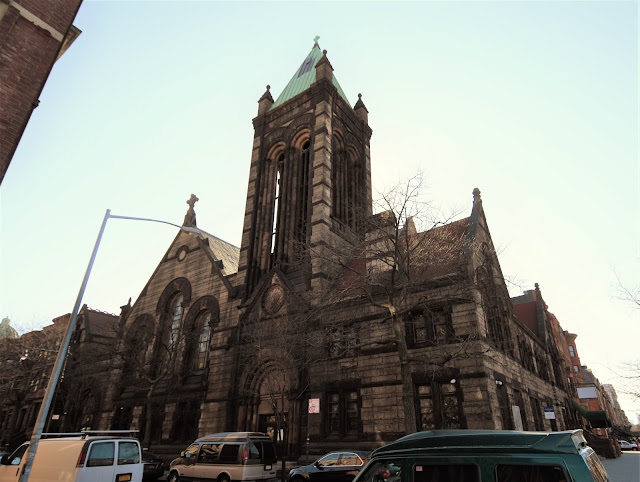 The Church of St. Martin continues to serve its neighborhood.   It also operates The Little Theatre to train young residents in dance and the arts.  Although covered in decades of grim, William A. Potter's masterful Romanesque Revival structure miraculously survives after two near misses with destruction.