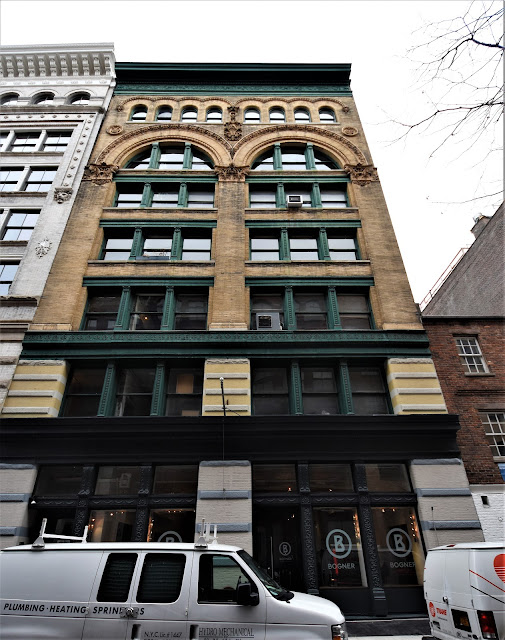 For decades the old house at No. 80 Wooster Street presented problems.  Called by The New York Times a "tramp lodging house" and a "ten-cent house," it was repeatedly the scene of violent fights (several fatal), crime and disease.   The disreputable history of the property would come to an end in 1894.

In May that year developers Abraham Boehm and Lewis Coon purchased it and the building next door at No. 82 for $75,000.  The hefty price--in the neighborhood of $2 million today--reflected the commercial potential of the site among modern loft buildings.  Two weeks after the transaction, the Record & Guide reported that Boehm & Coon would "build a seven-story business building on the site, to cost about $95,000."

Architect Gilbert A. Schellenger had just completed a ten-story skyscraper for Boehm & Coon at No. 14 Maiden Lane.  He was now called back to design the loft building on Wooster Street.

The old buildings were demolished and ground broken on July 14, 1894.  The new structure rose with lightning speed, completed in only five months.  Schellenger had created a rather monumental seven story structure in the Academic Classicism style--a melding of Beaux Arts and Renaissance Revival.

The first and second floors, both distinguished by cast iron framed openings and brick piers broken by stone bands, were separated by an aggressive cornice more expected at roof level.  The upper portion of building was dominated by two massive arches, adorned with elaborate terra cotta capitals and foliate molding.  A series of arched openings connected by continuous terra cotta egg-and-dart molding dignified the top floor.   A decorative shield in heavy relief bore the initials of Boehm & Coon.

Even before the first brick had been laid "a large manufacturing firm" had leased the building.  That company was Boehm, Levine & Co., "rufflings and novelties" manufacturers.  Whether Alexander Boehm, one of the principals, was related to Abraham Boehm is unclear; but highly probable.  The firm took the upper five floors.

The fussy fashions of the 1890s demanded intricate pleats and "ruchings."  Somewhat surprisingly, the Brotherhood of Locomotive Engineers' Monthly Journal included a column titled "Our Fashion Letter."  Its January 1892 article explained that ruchings, a series of tight pleats, "are now largely taking the place of Medici and other styles of flaring collars, both on cloth and silk dresses and on wraps."

Boehm, Levine & Co. was up to date on their styles.  An advertisement in The Journal on July 13, 1896 sought "Experienced hand pressers on ruchings; also fluters and crimpers."

On May 7 that year fire broke out in the paper box store and factory at around 9 in the morning.  The New York Times reported "The nature of the material caused the flames to spread rapidly, accompanied by a dense smoke."  Two firefighters were overcome by the thick smoke and Acting Chief Croker, known as "Smokey Joe," was cut by broken glass.

The stalwart firemen bounced back.  The Sun reported "Fire Chaplain Smith examined the men and decided that they needed a doctor rather than a priest. He gave them medicine which he got at a nearby drug store and they resumed work in a short time."


In 1902 Boehm & Coon sold "the modern buildings" to the Providence Life Realty Company.  In 1910 the owners advertised the store and basement, and one of the upper lofts for rent.  The ad noted "horsepower furnished."

Tenants within the next few years included Banner Knee Pants and Kotch Brothers, another paper box manufacturer.  In 1916 the paper box union struck several firms in the immediate neighborhood.  Labor disputes often included violence in the first decades of the century, and this one was no different.

Perhaps surprising to 21st century readers, one of the leaders of the strike was 15-year old Sarah Dubrowitz.  The feisty teen led workers as they marched up and down Wooster Street on August 30, 1916.   Management could be as rough as the unions; and a group of paid anti-strikers assembled in front of Kotch Brothers.  The presence of the thugs kept the demonstrators away from the entrance to the building.

When an automobile pulled up in front of No. 82 Wooster Street with a suspected striker inside, "a gang of strikebreakers surrounded" it, according to The Times.  The terrified driver was fortunately rescued.  The newspaper added "The police, however, released the auto from the crowd."

Before long the last of the apparel firms left the Wooster Street building.  In 1917 the Gold Seal Battery & Electric Co. took space.  And in 1918 Frank P. Kruger, dealer in "dried fruits, nuts, etc." leased the entire building.  The firm subleased floors to other tenants like the J. Z. Tool Co., which moved in in 1918; and the Quartin Manufacturing Company.

Frank P. Kruger eventually moved from dried fruits to candy making.  The smell of chocolate wafted out onto Wooster Street even after the company, probably a victim of the Depression, declared bankruptcy in 1930.  The Waldes Chocolate Company was making candy in the building at least through 1933.

When Mark Miller died in November 1963, the Soho neighborhood was just seeing the seeds of change.  The loft buildings built in the second half of the 19th century were neglected and, in many cases, largely vacant.  Artist George Maciunas saw potential in their vast spaces.  According to Roslyn Bernstein and Shael Shapiro in their 2010 Illegal Living: 80 Wooster Street and the Evolution of SoHo," Maciunas wrote "Normally the artist requires long unbroken spaces with high ceilings and adequate illumination and these needs can only be met by commercial lofts."

The Times described Maciunus as "a young ex-Lithuanian who calls himself an agitator by profession."  In 1967 he purchased Nos. 80-82 Wooster from the Miller family and created Soho's first artists' co-op on the upper floors--despite its use as residential space being illegal.  Downstairs, Jonas Mekus, filmmaker and critic, laid plans for a 260-seat theater of the Film Culture Non-Profit Corporation.

On May 26, 1968 The Ford Foundation announced a $40,000 grand "to renovate the Filmmakers Cinematheque at 80 Wooster Street.  The funds will be used to convert the building into a 225-seat theater for the showing of experimental and avant-garde films, add space for archives and for the uses of the Film Culture magazine staff."  The New York Times reported that additional space would be used "to facilitate activities of the experimental film-making group" headed by well-known artists like Mekas, Stan Brakhage and Andy Warhol.

By now George Maciunas, through his Fluxhouse Cooperatives, Inc., had set up three more co-ops in Soho.  On June 16, 1968 The Times explained "Fluxhouse obtains mortgages, performs legal and architectural services, does renovation work and (if members want) manages the buildings."

In 1974 the Filmmakers Cinematheque space became home to Anthology Film Archives.  Weekly screenings were offered from the group's extensive collection of "the venerable great and the experimental new in the world of film."  The Anthology Film Archives also held live performance art, like Joan Jonas's Mirage dance work in September 1977.

In the meantime, the difficult Maciunas went head-to-head with the artist owners until he finally stormed away from Soho and Manhattan in general.  He died at the age of 47 in 1978.  The following year the residential spaces at Nos. 80-82 Wooster Street became legal. 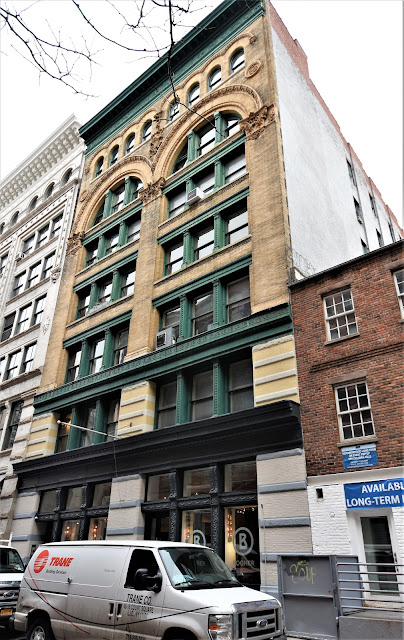 As the century wound down, the ground floor space became Gallery Henoch.  And as is the case with so many of the district's loft buildings, today it houses an upscale boutique.   Rather hidden away on Wooster Street, the building that some call the birthplace of Soho is often ignored overlooked.