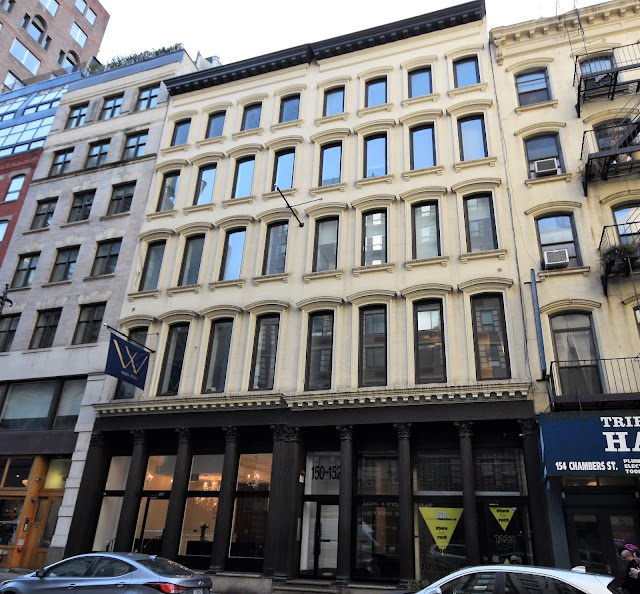 In 1859 Stebbins, Hoyt & Co. moved into the new building at No. 152 Chambers Street, between West Broadway and Greenwich Street.  That year The New-York Sketch Book explained "With a view to increasing their facilities, they have recently removed from their former place of business, 43 and 45 Barclay-street, to the commodious and substantial warehouse at No. 152 Chambers-street, where they have six floors for the transaction of their large and increasing trade."

The writer had included the basement level in describing six floors.  Visible from the street, four floors of white marble sat above a handsome cast iron base, three steps above the sidewalk.  Fluted columns with elaborate Corinthian capitals upheld an entablature crowned by a stone cornice.  The attractive segmental arched openings were fully framed; their carved hoods nearly touching one another.  A cast Italianate cornice crowned the design.

Stebbins, Hoyt & Co. had been established more than twenty years ago, The New-York Sketch Book calling it "one of the oldest houses in its line of trade in New-York."  The wholesale dry goods dealers dealt in sheetings and shirtings, yarns, "white and colored warp, batts, wick, twine, wadding, and seamless bags" and a variety of other items including "musquito netting."

Shortly after moving into the Chamber Street building managers noticed stock was missing.  They tried for weeks to find the source; but could only discern that "it appeared pretty plain that the goods must have been taken from the store after it had been closed for the day," according to a newspaper.

On Saturday, June 25, 1859 they hid a trusted young employee inside the building.  It was not long after closing that he watched as a cart drive up and John Bauden unlocked the door.  The driver of the cart and another man helped Bauden load bales of fabric onto the cart, which then rapidly drove off.

Stebbins, Hoyt & Co had hired John Bauden three years earlier.  The New York Times described him as "an Irishman, 28 years of age, [who] was married but recently."  He had always been held in high regard.

Bauden was soon arrested and he promised officers he could take them to the buyer of the stolen goods.  He was taken in a street car to Brooklyn, but during the trip he planned his escape.  The Times reported "Bauden feigned sickness during the journey, and after leading the officers hither and thither on various pretences [sic], finally leaped from his seat in a horse railway car at the outskirts of the city, and ran rapidly away."

Bauden was apparently athletic, because he made it about a mile and a half before being overtaken.  In the meantime, the foot pursuit became dramatic, smacking of a Keystone Kops scene.  "The chase became an exciting one, and was participated in by the numerous butchers in the vicinity and their bull-dogs."

It turned out that the thefts had been going on for about a year.  The scheme was finally unraveled when it was discovered that the buyer, an Englishman named Robert Lees, would visit the Chambers Street building and discreetly point out to Bauden which goods he wanted.  Police found $400 of the stolen goods in Lees's possession.

Despite his obvious guilt, Bauden's employers still had faith in him.  The Times wrote 'they even now believe him to have been seduced into the commission of the crime by the more wily Lees."

The following year, on March 3, 1860 Stebbins, Hoyt & Co. signed a petition to the "Mayor and Commonality of New-York City" requesting improved street cleaning.   The long list of businesses on the petition reflected the rapidly-changing neighborhood.

One holdout at the time was the old brick house next door at No. 150; although by 1861 it was being used for business.  That year, on October 23, real estate agent Henry McEwing listed a house for rent on West 24th Street.  Interested parties were instructed to apply "upstairs" at the Chambers Street address.

Somewhat surprisingly, Stebbins, Hoyt & Co. was gone from No. 152 Chambers Street by 1864.  That year an apparel manufacturer occupied the third floor, advertising for "hands to work on woven shirts, also on spangling machines."

And the following year another tenant was the victim of a theft that was eerily similar to those committed against Stebbins, Hoyt & Co. six years earlier.  The New York Times reported on August 22, 1865 "Mr. Arnole Schultz, of No. 152 Chambers-street, having recently missed upward of $600 worth of spool silks from his warehouse, set a watch on his employes."  Undercover detectives caught 13-year old Andrew Fess red handed.  "The lad confessed that he had stolen large quantities of silk and sold the same to James Boyce."  Boyce was a junk dealer on Baxter Street and he, too, was arrested and tried for the larceny.

Space was available here early in 1867.  In February an advertisement appeared in The New York Herald offering "The upper part of the five story Marble store."

In the meantime, the old house next door was replaced by a loft and store building that was a nearly exact match to No. 152.  Only the slightly mismatched heights of the storefronts and first floor cornices divulged that they were separate buildings.


In 1869 Carter & Co., grocers, was on the ground floor of No. 150 Chambers Street.  On the second floor were shoe dealers Fouse & Co..  The third floor was occupied by clothiers S. O. Alexander & Co.; the fourth by another clothing firm, Wollf & Bros.; and the top floor by S. Stearns, makers of traveling bags.

At the same time silk and woolen dealers Stitt & Underhill operated from No. 152.  The firm owned silk mills in Little Falls, New York and Franklin, New Jersey.  But within the decade the produce and dairy district would overtake the Chambers Street block.

In the mid-1870s No. 150 was home to Armstrong & Morrison, and Fairfield & Trask, both butter merchants; and Besson & Van Olinda, produce dealers.

In 1880 Besson & Van Olinda hired a traveling salesman, L. E. Bevans.  He had been a "prominent business man," according to The New York Times, but his business failed; prompting him to find the less impressive source of income.  Bevans lived with his wife and two children in Port Jervis, New York.  Apparently despondent over his changed circumstances, the 43-year old stepped into the outhouse behind his home on the morning of December 19, 1881 and shot himself in the head.

Instead of butter and eggs or produce, Alexander M. Powell dealt in candy.  His firm  moved into No. 152 Chambers Street in 1884.  In 1888 the company advertised for "Girls to dip chocolates and bonbons; experienced hands only."

In 1900 Powell took over No. 150 as well, combining the two buildings internally.  Fifteen-year old Kate Smith worked in the candy factory that year.  She lived across the river in Jersey City.  At around noon on October 29, 1900 fire broke out in the drug manufacturing building of Tarrant & Co. a block away at the corner of Greenwich and Warren Streets.

The flammable chemicals detonated in an explosion that obliterated the buildings on three corners of the intersection.  The Yuma Pioneer said it "shook the lower end of Manhattan like an earthquake, hurled a seven-story building into the air, and set fire to two blocks of buildings."

Frightened into hysterics, Kate Smith ran panicked from the candy factory.  The following day The New York Times printed a long list of the missing, including Kate.  Her foreman, Mrs. S. B. Brennan, reported that the girl had run in the worst possible direction, towards Greenwich Street, where the devastation was centered.   The Times noted she "has not been seen since."


Alexander McDonald Powell had founded his candy manufacturing company in 1874.  It grew to be among the largest candy makers in the city.  Powell was one of the first to market candy in packages and during World War I he would introduce the "emergency chocolate ration" used by American soldiers and sailors.


Before then, though, the candy factory moved from Chambers Street to Canal and Sullivan Streets.

The combined buildings became home to Smith & Hemenway Co. in 1911.  Their former location on Duane Street was destroyed by fire on January 11 that year.  Just two days later it opened on Chambers Street.  Smith & Hemenway Co. were manufacturers of "hardware specialties," under the Red Devil brand.


The firm shared the buildings with other firms like Couse & Bolten, manufacturers of "pure oak tanned leather belting, waterproof belting, hydraulic and lace leathers," which moved in in 1914; and Curtis & Carhart, sellers of "Colonial" brand motors, lamps and generators, and "Viking" transformers and electrical items.

In 1916 Wm. L. Haas Co. occupied the fourth floor of the combined buildings.  The firm manufactured "white and hand-painted toilet and manicure sets."

By the end of World War I P. M. Dreyfuss Co., Inc. was on the fourth floor of No. 150 Chambers Street.  It manufactured labor-saving devices aimed at the housewife.  In 1919 it marketed the Easy Vacuum Electric Washer, and two other models, The Locomotive and The Coffield.  For a $6 down payment an electric clothes washer would be delivered to the buyer's kitchen.  It was then paid off in "small monthly payments."  An advertisement stressed "An Electric Washer is a proven necessity."


The industrial type tenants remained here for decades.  Curtis & Carhart and P. M. Dreyfuss Co. would stay into the 1920s.  In the mid-1940s two kerosene lamp dealers, Frederick Hayden Company (who occupied the fifth floor) and E. C. Bree Company were here.  Also in the building was the flavoring extract merchants Widmayer & Jungling, and Industrial Photo Products on the third floor. 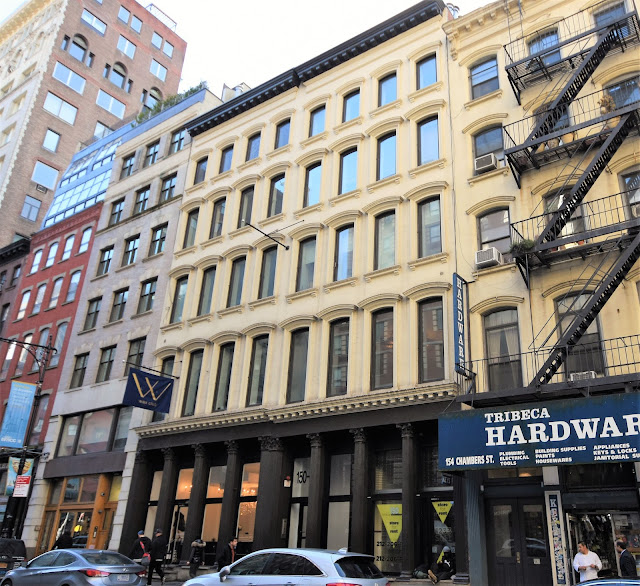 Even as the Tribeca neighborhood changed during the beginning of the last quarter of the century, the Jaro Electronics Corp. was in the building.  But that was all about to change.  In 1989, as was the case with so many vintage Tribeca loft buildings, Nos. 150-152 Chambers Street was converted to apartments above the store level.