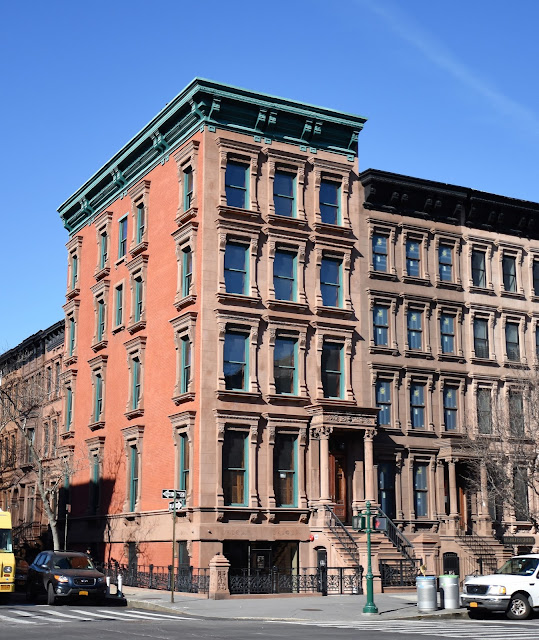 On May 21, 1887 The Record & Guide drew readers' attention to "The Transformation of a Beautiful District."  The article described the lightning-fast development of the Harlem area near what was called Mount Morris Square.  Within the past three years, the writer said, "regions that were bare enough to raise crops upon have become the site of many handsome and costly buildings."

Among those transforming the district was architect-developer A. B. Van Dusen.  At the time of the article he had filled half the western block front of Sixth Avenue (renamed Lenox Avenue later that year) between 121st and 122nd Street; and the entire blockfront between 122nd and 123rd, with rowhouses.  The Record & Guide called the residences "tasteful and substantial."

Most "substantial" of the long row was No. 241, at the northwest corner of West 122nd Street.  Looking like a super-sized version of its otherwise nearly identical neighbors, it boasted the mansion-width of 25 feet.  Faced in brownstone on the avenue and ruddy red brick on the side elevation, it rose above the row because of the exceptional ceiling heights inside.  Van Dusen's up-to-the-minute design was transitional--melding neo-Grec with the newly-appearing Renaissance Revival styles.

The expensive exceptions that set the house apart from the row suggest that Edward Roberts had purchased the residence before Van Dusen had put pen to paper, and gave input on amenities.  Exposed on three sides--affording a luxurious abundance of air and light--its carved architrave window surrounds did not diminish on the upper floors.  Their prim cornices, tiered sills, and foliate brackets were continued on the 122nd Street side.


Edward Roberts was born on March 23, 1812 and had an impressive military pedigree.  His great-grandfather, John Roberts, earned prominence in the French and Indian War; his grandfather, Christopher Roberts, had served in the Revolution; and his father was Major General Martin Roberts.

Until 1841, when he arrived in New York City, Roberts had traveled, studied and taught school.  His proficiency in Greek, Latin and Hebrew drew repeated offers for professorships, all of which he declined.   The year before arriving in New York he married Lucy Maria Benjamin.  The couple had three children before Lucy's untimely death in 1845.


In 1848 he married Irene Bartlett Robinson, and they had another five children.  Like her husband, Irene had an imposing family history.  She was descended from John Robinson, who arrived in Massachusetts in 1636.  His son married the great granddaughter of John Alden and Priscilla Mullen.  Another relative, Josiah Bartlett, was a signer of the Declaration of Independence.

Shortly after coming to New York Roberts helped found Roberts, Cushman & Co.  The firm manufactured "hat materials," like hat bands, mechanical hat size rulers, and trimmings.  As successful as the firm was, The New York Times later noted that he "amassed a fortune in real estate."

Just three years after moving into the mansion, in 1890, Roberts was diagnosed with cancer.  In April 1891 his condition had deteriorated to the point that he was bedridden.  Two weeks later, on May 3, he died.

Irene was involved with the New-York Indian Association; a reform group organized following the Civil War.  Its founding was spurred by the western migration of settlers and the corruption in the Indian Service (now the Bureau of Indian Affairs).  The goals of the group were, foremost, to convert Native Americans to Christianity, to grant them citizenship, and to do away with the reservation system.

On April 16, 1895 she opened the Lenox Avenue house for a reception and sale for the benefit of the New-York Indian Association.  The drawing rooms were filled that afternoon with the wives of wealthy New York businessmen.

Irene suffered a fatal heart attack on Monday, March 7, 1897.  Her funeral was held in the house three days later.

The Roberts family retained ownership of the mansion, but never again would it be a private home.  The well-to-do families moving into the Harlem neighborhood brought with them the need for upscale stores, handsome churches and private schools.  Mary Schoonmaker leased the Roberts house for her New York Collegiate Institute.

Schoonmaker had established the private girls' school in 1888.  The Handbook of Private Schools explained it provided "courses from kindergarten through college preparatory and finishing work."  Also advertised as Miss Mary Schoonmaker's School for Girls, its graduates were from socially-elite families.  A mention in Harper's Magazine in 1899 noted "Certificate admits to Smith, Vassar, Wells, Wellesley."

The New York Times reported on May 7 that year that "An exhibit of school work was given yesterday by the pupils of the New York Collegiate Institute in the school building, at 241 Lenox Avenue...The manual training work was much admired by the visitors, especially that of the classes in history and art.  The paper work and clay modeling of the kindergarten classes also excited interest."

Mary Schoonmaker apparently made a brief trial of admitting boys.  An advertisement in the New-York Tribune on August 28, 1910 read "Boys prepared for the Colleges and Scientific Schools.  Well-equipped Gymnasium."

But the experiment did not last.  On April 19, 1913, when the students gave their annual exhibit of school work, the facility was once again called Miss Mary Schoonmaker's School for Girls.  Students read their literary compositions to what The Sun called a "large audience."  Among the titles of the essays read that day was Marjorie Page's "How We Went a-Frogging," Eleanor Hope's "Cleaning My Room," and Elizabeth I. Lyons's "Racketty Packetty House."

Before the fall session that year Mary Schoonmaker moved the school to No. 345 West End Avenue.  In October the Roberts family leased the house to the Finnish Women's Co-Operative Home.  New York had seen the advent of working women's residence hotels; but this one was starkly different.

Founded by Finnish servants around 1908, it was described as "really a working girls' club."  The women, mostly domestic maids and cooks, paid $5 a year to become a shareholder.  Those who did not live with their employers lived here.  Elene Foster, writing in the New-York Tribune on November 3, 1918, described the larger upper floor rooms as "fitted up with a row of small white iron beds like a dormitory, while the smaller ones are rented as single rooms."

Girls using the dormitory accommodations paid $7 for room and board.  Single rooms went for $8.50.  Foster said "The meals are excellent, and any shareholder has the privilege of inviting guests of either sex to luncheon or dinner by paying a nominal sum."

Unlike other working girls' residents, which had strict regulations, the Finnish Women's Co-Operative Home was operated on an honor system.  "There are no rules to be observed in the home except those which any girl of decent inclinations or education would naturally observe," said Foster.  "The house is never closed and girls are admitted at any hour."

The dining room and kitchen were in the basement.  Irene Roberts's front parlor was used as an employment bureau; while the back parlor was communal lounge.  Here was where "the girls receive their men friends and where they can meet in the afternoon for a cup of coffee and the dainty Finnish wafers, which, according to the old home custom, are served at 3:30."

Although the Roberts estate sold the house in September 1921 (the buyer announcing he planned "extensive alterations"), the Finnish Women's Co-Operative stayed on through the term of its lease.  It was still here on June 23, 1922 when an advertisement appeared in The New York Herald:  "GIRLS--Two Finnish girls desire positions together in country.  241 Lenox av."

By now Harlem in general saw a shift in demographics as whites were replaced by blacks.  But the neighborhood around 122nd Street and Lenox Avenue was, perhaps surprisingly, still one of mostly middle-class whites.  In 1923 the renovations to No. 241 were completed, resulting in a doctor's office on the parlor level, a store in the basement, and a single family home on the upper floors.

Around the time of the Great Depression and area saw its further transition to a black neighborhood.  By 1930 Edna Mattke was running a rooming house here, while David Reich's Chapel, a funeral home, operated on the parlor level.

Despite the disastrous Stock Market Crash, Edna was persuaded by an elderly roomer to let her invest $300 in stocks on September 9, 1930.  Marion La Touche, who was 85-years old and described as a "slim, faded" woman, let her in on "confidential information" from a "high authority in Wall Street."  She promised Edna that Republic Steel stock was "the best on the market" would gain "5 to 6 points daily."

The old woman's knowledge and her grandmotherly demeanor not only convinced Edna, but ten female neighbors.  Marion La Touche did buy stocks with the several thousand dollars she collected; but she kept them for herself and disappeared.

What Edna and her neighbors did not know was that Marion had a rap sheet that extended back to March 1884 when she had been sentenced to Welfare Island for grand larceny.  Police records showed that in the past 47 years she had been arrested nine times on theft charges and had served several prison terms under various names.


Edna Mattke had the old woman tracked down and arrested.  The two faced each other in court on August 6, 1931.  Relying on her innocent appearance, La Touche appeared in a "drab black dress" and answered examination "in faint, measured words," according to The Times, with the dexterity of a politician.

When District Attorney Charles Pilatsky asked if it were true that she had been incarcerated in 1884, she replied "You're asking me something that happened so long ago I don't remember."  When pushed, she outright lied, insisting she had not been imprisoned and this was "the first time I've been on a witness stand in my life."

The jury indicted La Touche on second degree grand larceny on August 19; but officials now grappled with the elderly woman's fate.  State Law mandated that because of her repeated offenses a conviction would bring a mandatory life term in prison.

Staff Captain Agnes H. McKernan of the Salvation Army heard of the case and offered "to provide a home for her to remove her from temptation," reported The Times on September 1.  Judge Donnellan took pity and allowed her to plead guilty to a misdemeanor.  She was sentenced to six months to three years; but the judge suspended the sentence based on the Salvation Army's promised to house her for life "in the proper environment."

The funeral home (it became Steinfeld's Chapel around 1933) remained for years.  And the upper floors were rented as furnished rooms through the rest of the century.  The elegant rooms where the Roberts family had lived now saw tenants come and go often on a weekly basis.

Then in 2008 plans for a residential conversion were filed.  The extraordinarily sympathetic restoration and renovation was completed in 2014.  Above the basement and parlor floor commercial spaces, there are now just one spacious condominium apartment per floor.