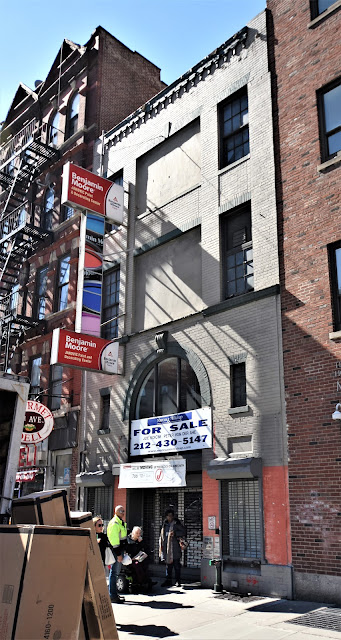 The impoverished and crime-ridden Hell's Kitchen neighborhood encompassed the area from approximately 34th street to 59th, and from Eighth Avenue to the Hudson River in the 19th century. Many of the dilapidated buildings were wooden, like the three-story "dwelling and store" at No. 771 Ninth Avenue, just off the corner of 52nd Street.

On May 13, 1878 Charles Ruf sold the property which included a four-story brick tenement in the rear to Mary Kempf for $10,550.  Mary was apparently spreading her finances thin--she took out a mortgage of $9,000 to pay for the property.

The Kempf family lived above the store into the 1890s.  In the 1880s George Semerling's butcher shop was at street level; but by 1892 A. Klein had converted it to his saloon.  The saloon was replaced by the hardware store of Shipman & Portal by 1906--the year a terrifying explosion occurred in the basement.

Julius Shipman and Harry Portal were young entrepreneurs--Shipman was 37 and his partner ten years younger.  They used the basement as a storeroom and were there at around 10:00 on the morning of April 26 when the incident occurred.  The New-York Tribune reported "The explosion was violent, tossing furniture about the basement and causing considerable excitement in the neighborhood."  Both men were taken to Roosevelt Hospital with severe burns.

Although the Tribune deemed the cause "a mystery," a reporter for The New York Times thought he had it figured out.  He wrote, "Shipman & Portal visited their storeroom this morning for the purpose of overlooking their stock, and lighted a match while there.  Instantly there was a loud report, which shook the houses on either side of the building, and frightened the inmates."  The newspaper attributed the explosion to leaking illuminating gas.

Julius Shipman and Harry Portal left Ninth Avenue shortly afterward.  In June the American Druggist and Pharmaceutical Record reported that John Milerick, who had recently graduated from New York College, had opened Milerick's Pharmacy in the space.  "The neighborhood is tenanted by numerous families and the venture should prove a successful one," said the article.

John Milerick's drugstore fell victim to the new motion picture craze in 1921.  Harris Theatrical Enterprises demolished the old building to erect the Central Theatre.  The unpretentious brick structure was dominated by the arched central entrance.  Little expense was wasted on the decoration expected in the elaborate theaters of more affluent neighborhoods; although the pretty brick corbel table at the roofline was a delightful touch.

The choice of names was perplexing and, no doubt, confusing to theater-goers.  The well-known Central Theatre on West 47th Street had been operating for years at the time, and often advertisements for either did not mention the address.

The Central screened silent films like the Lady Godiva.  The Evening World said on May 8, 1922 it was "well worth seeing" and noted "Although much has been made of the famous ride of this devoted woman, it is not the picturization of a flapperish exploit, but a beautiful picture of a beautiful poem."

Movie goers were treated to occasional live entertainment as well.  In June that year The Evening World noted "In addition to Mae Murray in 'The Delicious Little Devil' will be Alla Axiom, crystal gazer."

The motion picture theater lasted a relatively short time in the down-and-out neighborhood.  On November 22, 1928 The New York Times reported on the sale of the property to E. W. White.  The investor resold the building to Harry Wolf.

Wolf, who had organized the 771 Ninth Avenue Corporation for the deal, erased out all traces of the theater.  S. Wolf's Sons had been in business since the end of the Civil War.  Harry Wolf now established the family's wholesale and retail paint store in the old motion picture theater.  Later Wolf Paints and Wallpapers broke through the back wall and expanded into No. 406 West 52nd Street.

The paint store would be a fixture on Ninth Avenue for decades.  The gritty personality of Hell's Kitchen was slow to change, as reflected in Wolf's inventory.  On February 14, 1985 The New York Times noted "Wolf Paints...sells a graffiti remover in a spray can, $3.66, for use on nonporous surfaces.  The store also sells heavy-duty graffiti removers and graffiti barriers." 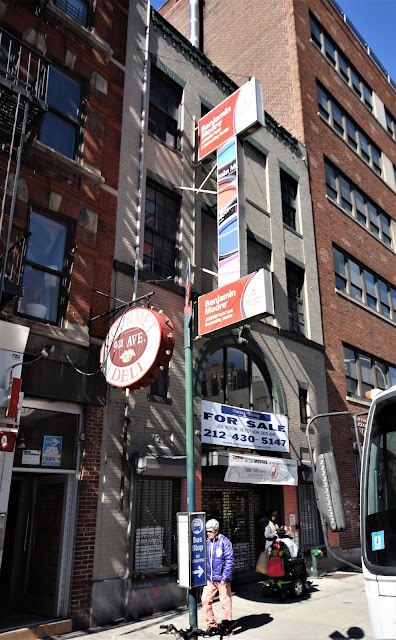 Wolf Paint was eventually taken over by Benjamin Moore Paints.  In 2016 the firm announced its plans to move to Tenth Avenue, ending 85 years as a Hell's Kitchen mainstay.