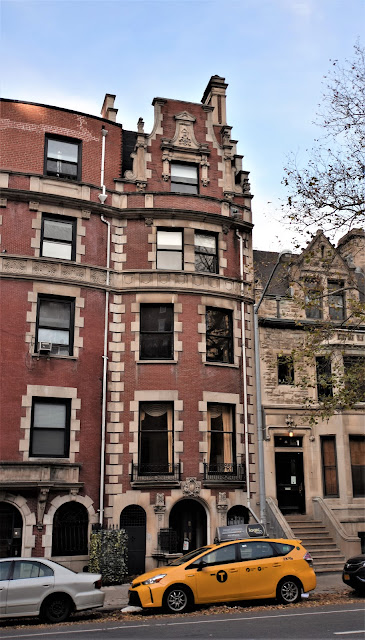 As the Upper West Side rapidly developed into a vibrant suburb in the 1880s and '90s, brothers John T. and James A. Farley formed Terrence Farley's Sons.  The firm doubled as developers and contractors.  On December 22, 1900 The Real Estate Record & Builders' Guide said they "have always been engaged in the building of the best of residence improvements and have always kept abreast of the continually increasing demands of the times."

Equally, or more, prolific at the time was architect Clarence F. True.  His penchant for historic styles made his more than 400 houses readily identifiable and earned him the later nickname the "face of the Upper West Side."  On September 16, 1898 he filed plans for seven five-story "brick and stone American basement dwellings" for the Farley brothers.  The row wrapped around the northeast corner of 90th Street and West End Avenue, with four residences facing the Avenue, and three on the side street.

The homes were completed in 1899.  The northernmost was No 627.  The narrowest of the West End Avenue row at 18 feet, it was nonetheless impressive.  Typical of Clarence True's liberal treatment of historic styles, the first four floors were Elizabethan Revival while the attic floor erupted as a flamboyant Flemish Revival gable.  Faced in red brick and trimmed in limestone, the house featured a striking Elizabethan-inspired entrance, three stories of bowed front which provided a gentle balcony at the fourth floor, and brawny quoins along the sides and openings.  It was a near-match to the house at the other end of the row, No. 307 West 90th Street. 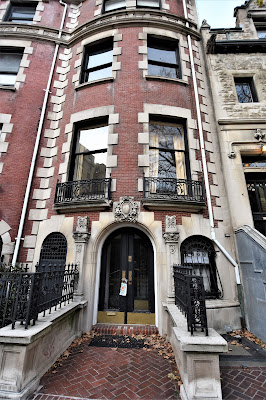 On May 5, 1900 The Record & Guide reported that Terrence Farley's Sons had sold No. 627 West End Avenue, the "new 5-sty American basement dwelling," to "a Mr. Morgan."  The mysterious Mr. Morgan was stock broker Charles W. Morgan, who purchased the house "on private terms."

His brokerage firm, C. W. Morgan & Co., boasted two offices in New York City, one in Philadelphia and another in Washington.  But despite his obvious success, he could not have purchased the expensive new home at a worse time.

Seven months later, almost to the day, the New-York Tribune ran a one-line shocker on December 6.  "Charles W. Morgan, a Consolidated Exchange broker at No. 71 Broadway, and his bookkeeper were arrested, charged with conspiracy and grand larceny."

Two days later The New York Times published Morgan's letter of denial.  He said, in part, "It is impossible in the space of a letter to deny specifically the many untrue statements that have been published.  Appeal has been made to the courts where these loose statements can be properly sifted and disproved...Until that time, I beg the public to at least suspend judgment."

Obviously, not every suspended judgment.  The broker had not yet paid the contractor who did decorating work in the house.  On the same day that Morgan write his denial, the Mitchell Vance Company filed a mechanic's lien against No. 627 West End Avenue, "for $686.25, for chandeliers, brackets, and labor."


Things did not improve for Morgan.  On May 25, 1901 The Evening World ran the headline "BROKER IN A PECK OF WOE" and began its article saying "Broker Charles W. Morgan is in a peck of trouble."  A day earlier he had been indicted on yet another charge of grand larceny.  The World reported "He was found this morning at his handsome house, 629 [sic] West End Avenue, by Detectives McConville and Barrett...Probably this last incident was not much of a shock to Mr. Morgan."

Morgan was out on $5,000 bond at the time; but he was again arrested.  This time it was Mrs. Florence C. Tobey of Middetown, Connecticut who filed the complaint.  She said that she had instructed Morgan to purchase $2,000 in specific stocks.  Although he assured her that he had bought the stocks, he never turned the shares over to her despite her repeated urging.  Mrs. Tobey turned to the District Attorney's office and an investigation showed "that Morgan purchased the required shares and resold them on the same day," as reported in the Tribune.

At the time of Morgan's first arrest, another broker was undergoing legal problems.  In November 1900 Consolidated Stock Exchange broker Joseph Halk was arrested on the floor of the Exchange by Treasury Agent Frank G. Thompson.  Halk was charged with violating the Internal Revenue law by failing to affix stamps to the memoranda covering the sale of stocks.  He was held for two months before being released on January 28, 1901.  The New-York Tribune reported "It is understood that Halk has paid the Government the amount which he is said to have been short."

Halk had married Mabel Agnes Northrop at Sherry's on December 12, 1899 (less than a year before his embarrassing and very public arrest in the Exchange).  Mabel's father, William Asher Northrop, died on Sunday, February 21, 1904.  His funeral was held in the West End Avenue house at 8:00 on the evening of February 23.

Joseph and Mabel Halk remained in the residence until 1909.  It was purchased on December 4 that year by investor Henry C. Scofield, of Stamford, Connecticut.  He immediately leased the house to 41-year old Warren L. Green, president of the American Bank Note Company.  Green had married Jeanne Marguerite Thierry in Paris in 1891 and the couple had one daughter, 13-year old Marguerite.


The millionaire was also vice president of the United Bank Note Corporation, a director in the American Building Co., the National Bank Co., and the Continental Bank Note Co.  The family's summer home was in Fairfield, Connecticut.

Green's was a true American success story.  He was hired by the American Bank Note Company in 1882 as an errand boy, earning $3 a week.  When he was not rushing on downtown streets with messages or sweeping up, he learned the business.  While still in his 20's he was made a manger and continued through the ranks until becoming president in 1906.

Following the Green family at No. 627 West End Avenue was that of George R. Branson, president of the United States Fire Insurance Company.  He and his wife, Isabelle, had two sons.  Two daughters from an earlier marriage were also in the house, as was their grandfather, also named George Branson.

The elder Branson was born in England and had retired around 1899.  He died in the house on Monday, March 31, 1919 at the age of 85.  His funeral was held in the parlor on Wednesday night, April 2.

A year later, the house was the scene of a much more joyful event.  On April 17, 1920 Alice Russell Branson was married to J. Frederick Bohmfalk here.  That same year the Bransons' sold their home to Sadie Salmowitz.

Sadie appears to have intended to lease the property, as Henry C. Scofield had done.  In fact, on January 29, 1921 The New York Herald reported that she had rented it to Mrs. H. M. Barry.  But less than five months later, on June 19, the New-York Tribune noted that Sadie Salmowitz had sold the house to Theresa Manheim.

The new owner appears to have had her hands full.  On August 28 that year she placed an advertisement in The New York Herald seeking "Woman, white, to take care of 3-year-old child; must speak German."

Throughout the next few decades No. 627 would be home to a string of interesting residents.  Journalist John Klein and his wife, Louise, lived here in the 1930s.  He had covered the Boer War for The New York Herald and later worked for The World, and became Editor and Publisher of The New York Times.

Author Ivan Sandrof was living here in November 1938 while he was working on a book on the H. M. S. Hussar.  The British frigate had sunk off the Hell Gate section of the East River during the American Revolution.

Throughout the 20th century the house escaped the fate of most upscale vintage homes on the Upper West Side--it remained a private house.  In 1998 Broadway producer Tracy Aron purchased No. 627 West End Avenue as home to herself and her son, Danny.  According to Katherine Clarke of the New York Daily News later, "The house became well-known after Aron hosted a Halloween party there in 2002 attended by more than 300 kids."


In 2008, with Danny in college, she put the house on the market for $7 million.  She found a buyer, but as Clarke later explained, "As the two giant moving trucks rolled down West End Ave., Aron received a phone call from her broker, who said the buyer had an emergency and couldn't close on the property that week."

After six months of "one excuse after another to get out of closing," the Spring Awakening producer gave up.  She relisted the house but the nightmare continued.  According to Clarke "Aron accepted another offer on the property in 2012 and then another two in 2014, but none of the deals ultimately closed."


Finally in March 2016 Aron sold the house to the New World Foundation for $6.9 million.  The listing had detailed "five bedrooms, four bathrooms and all of the original details intact, including eight original fireplaces, plaster moldings, a back staircase, a library and two maid's rooms."