In 1891 Samuel Sinn purchased the newly-completed rowhouse at No. 12 East 94th Street.  Designed by A. B. Ogden & Son for developer John H. Gray, it was one of a string of new brownstone-faced houses.  The 49-year old was a member in the brokerage firm Sternberger, Furd & Sinn.  He and his wife, the former Diana Horkheimer of Virginia, had one son, Bernard, who was attending New York City College.

Bernard graduated from Cornell University in 1907 and went into banking.  The following year, on May 13, his father died.  The funeral was held in the 94th Street house two days later.

Diana Sinn and her son remained in the house.  Next door at No. 10 lived the Neuburger family.  Isidor Neuburger, who was born in Stuttgart, Germany, had founded the Neuburger Silk Company.  He died in his home at the age of 66 on January 22 1916.

By the time of Neuburger's death the 25-year old rowhouses were architecturally out of date.  Steps away at the corner of Fifth Avenue, the magnificent neo-Georgian mansion of Willard D. Straight had been completed the year before; and two blocks to the south Andrew Carnegie's grand home was in the same style.  The Sinn and Neuburger houses would join the trend before long.

On the afternoon of New Year's Eve 1918 the New-York Tribune reported "Joseph H. Choate, jr., is going to become a resident of Carnegie Hill, as the section adjoining the town house of Andrew Carnegie has become known.

"Mr. Choate has bought the two old four-story dwelling houses at 10 and 12 East Ninety-fourth Street...He will have the two houses reconstructed into one dwelling from plans by G. B. De Gersdorff, architect."

Like his father, Joseph Hodges Choate, Jr. had graduated from Harvard and was a well-respected attorney.  Yet his own successes would always be overshadowed by his father's reputation--he was the Ambassador to the Court of St. James under Presidents William McKinley and Theodore Roosevelt; and headed the American delegation of the Second International Peace Conference in the Hague in 1907.

Choate and his architect had a Harvard connection.  The 1903 Harvard Stadium had been designed by George B. de Gersdorff.  For the extensive remodeling project de Gersdorff followed the trend begun in the neighborhood by Andrew Carnegie in 1903, turning to neo-Georgian (with a splash of the harmonious neo-Federal).

The 42-year old attorney and his wife, the former Cora Lyman Oliver, were living at No. 158 East 71st Street near Lexington Avenue.  Cora, too, had an illustrious father.  Brigadier General Robert Shaw Oliver was a Civil War veteran and former Assistant Secretary of War.  The couple, married in 1903, had three daughters, Marion, Helen and Priscilla, and a son Joseph III.

The family moved into their new home in the first months of 1920.  No trace of the combined high-stooped brownstones remained.  George B. de Gersdorff had produced a refined residence of Flemish bond red brick trimmed in contrasting stone.  The stone-framed entrance, topped by a projecting cornice, was slightly offset.  Its double doors were adorned with a handsome iron fanlight.  (Interestingly, while the fanlight design incorporated the street number "12," the Choates would variously list their address as either "10" or "12.")

Cora Choate wasted no time in opening the doors to her new home.  She was an active supporter of presidential candidate Leonard Wood.  On April 27, 1920 the New-York Tribune noted "Many meetings for women interested in the campaign of Leonard Wood for President will be held this week."  Among those events, it reported "Thursday evening, Mrs. Joseph Choate jr. will hold a meeting for business women at her home, 10 East Ninety-fourth Street."

More than four decades earlier, on February 28, 1878, Mrs, John Jay hosted the first meeting of the Thursday Evening Club in her Washington Square mansion.  She intended the social club to “maintain its standard, and to make it increasingly a centre of intellectual intercourse and recreation, by resisting every tendency to ostentation or extravagance in its entertainments and by welcoming to its fellowship those whose credentials are to be found in cultivated tastes and literary or artistic accomplishments.”

Now Joseph and Cora resuscitated the exclusive group.  On March 16, 1922 The New York Herald reported "The meeting of the Thursday Evening Club last week with Mr. and Mrs. Joseph H. Choate at 10 East Ninety-fourth street revived memories of an organization unique in the history of society and which has withstood all changes, in that august body, that naturally have come about with new ideas and the shifting of individual families whose homes at the start of the club seemed almost fixtures for generations."

As with all moneyed families, lavish entertaining for the children centered around the girls.  In 1922 the focus of attention would turn to the debutante festivities for Marion.  They started out on December 5, 1923 with a reception and musicale for 200 "older friends" of her parents.  "Next Wednesday evening," reported The New York Times, "Mrs. Choate will give a dinner dance for Miss Choate and the young dancing set."   The 50 guests invited to that dinner included Consuelo Vanderbilt, the daughter of William K. Vanderbilt, Jr. and the namesake of her aunt, the Duchess of Marlboro.

In 1925 it was Helen's turn.  Her debut included a dinner and dance on December 11 for guests with socially-elite names like Belmont, Iselin, Stokes, Baker, Phelps and Burden.  And in 1927 Priscilla was feted with her coming out entertainments.

One by one the Choate girls married.  When Helen married Geoffrey Platt in the Church of the Heavenly Rest on December 20, 1932, The New York Times noted "The marriage is of wide interest not only in this city but Washington D. C., and London as well," reminding readers of Helen's grandfather's government positions.  Following the ceremony the Choates opened their 94th Street mansion ("which had been decorated with ferns, palms and various kinds of white flowers") for the reception.

Two years later the reception for Priscilla's marriage to Norwood Penrose Hallowell, Jr., was held here.  Like her sister, she was wedded in the Church of the Heavenly Rest.

On November 29, 1933 Joseph H. Choate, Jr. was appointed director and chairman of the Federal Alcohol Control Committee by President Franklin Roosevelt, making him the "virtual 'liquor czar,'" as described by The Times.  The position was necessary because of the reversal of the Volstead Act, eliminating Prohibition.

Choate was responsible, according to the President, for three main goals.  To ensure that States had full authority over methods of sale; that the public was provided with "pure liquor at moderate prices;" and that bootlegging was eliminated.   His appointment was well deserved.  He had fought arduously for the repeal of Prohibition for years.

Among the domestic staff in the Choate home was Mary Maroney.  The 55-year old maid helped teach a would-be mugger not to mess with feisty Irish girls on November 15 1945.  At around 10:00 that night 21-year old Price Swift had attempted to grab a purse from a school teacher, Mary Sheahan, on Madison Avenue.  The 35-year old woman refused to let go and the two ended up on the pavement struggling.  Mary's screams were heard by her father "who ran from their home, near Eighty-ninth Street, swinging a combination cane and shillelagh," reported The Times.  "Although Mr. Sheahan struck him, the suspect escaped."

Fifteen minutes later Mary Maroney was leaving the Choate mansion.  Just as she arrived at the corner of 94th Street and Fifth Avenue, Swift attacked.  She told police he tried to drag her into an alley, but she ferociously fought back.  Swift fled, but not before a passerby had summoned police.

He was caught four blocks away.  "Although he protested his innocence he was identified by the two women and Mr. Sheahan, and was charged with felonious assault and robbery," said the newspaper.

Cora Choate died in the family's country home in Mount Kisco, New York on November 11, 1955 at the age of 79.  Long active in the operations of the New York Orthopaedic Dispensary and Hospital, later part of Columbia Presbyterian Medical Center, she had served on its board of supervisors for over two decades and was its third vice president.

The following year in November Joseph Choate sold the mansion to the Louise Wise Services.  After renovations, the house was opened with a reception and supper on June 11, 1958.  Founded in 1918 by Louise Waterman Wise to find homes for Jewish orphans, it now "provides aid to unmarried Jewish mothers and adoption services for children up to 14 years," according to chairman Justice Polier.

The Louise Wise Services was forward thinking; possible too much so in some instances.  In 1963 the institution initiated a strong appeal for white couples to adopt black orphans.  The results would have been disheartening for most agencies:  a year later the program had failed to place one youngster.

But executive assistant Mignon Krause insisted that "the outlook was not completely pessimistic" and pointed out the agency's work in other areas.  Writing in The New York Times on April 27, 1964 Emma Harrison reported "Louise Wise, which once placed only Jewish children, has had unusual success in placing American Indian children and children of mixed marriages."

In 1991 the former mansion was divided into two rental apartments, one using the former service entrance to the east; the other the main doorway.  When D. Claeys Bahrenburg, formerly chairman of Petersen Publications, purchased the 12,000 square foot house in 2000 for $7 million, he found upscale amenities in the upscale apartments: a hidden movie screen in the front room of the parlor floor, two marble baths and Jacuzzi on the third; and the upper triplex contained three guest bedrooms, four marble baths and a master bedroom suite accessed by a sky-lit staircase. 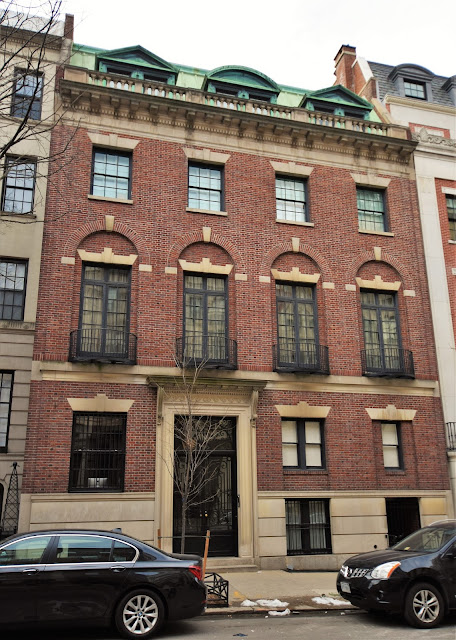 Bahrenburg made no changes; and put the house back on the market in January 2001 for $11.5 million.  Jeanne Greenberg Rohatyn initiated a two-year renovation that returned the mansion to a single family residence.  While she operates her gallery, Salon 94, from the ground floor, there is no signage; and the prim colonial-inspired house retains its 1920 integrity.